Last week I attended a favourite Arizona tourist destination for many Manitobans. It was not a museum, a car show, an art show, a scenic drive or hike, or even a golf course. It was an NHL hockey game – between the Winnipeg Jets and the Phoenix Coyotes.

Although the Winnipeg Jets play in Arizona only twice in the season, the games are popular with Manitobans. Some Manitobans escape the Canadian cold by wintering in Arizona and are already in the area. Others plan vacation time around hockey game dates.

As we drove on the freeway from the Greater Phoenix area East Valley to the Glendale Gila River Arena in the West Valley, we passed several vehicles with Manitoba licence plates, likely heading to the same place we were. The restaurants, patios and pedestrian walkways around the arena were full of people sporting Jets jerseys.

Jets fans going to the game and having a meal before the game.

Winnipeg and the Phoenix Coyotes have a history. In 1972, Winnipeg was granted one of the founding franchises of the World Hockey Association (WHA) and the Jets team was formed. By 1979 most of the WHA teams had folded and the Jets, still going strong, were folded into the NHL. The team lost some of its top scorers in that merger. As the NHL expanded in the U.S., operating costs and player salaries grew. The Jets, operating in the league’s second-smallest market, struggled. In 1996, the team was sold and moved to Arizona, where it became the Phoenix Coyotes.

At that time, Winnipeg got another hockey team, the Manitoba Moose, part of the International Hockey League (IHL). After the demise of the IHL in 2011, the Moose became part of the American Hockey League (AHL). The Moose were popular and games were well attended, but Winnipegers dreamed of having an NHL team again. “Bring back the Jets” sentiments and campaigns came and went. After unsuccessful attempts to buy the Phoenix Coyotes, True North Sports & Entertainment Limited, owners of the Manitoba Moose, bought the struggling Atlanta Thrashers, moved the team to Winnipeg and named them the Winnipeg Jets. The Manitoba Moose moved to St. John’s, Newfoundland. They are now the St. John’s IceCaps, the AHL affiliate of the Winnipeg Jets.

When the announcement of the purchase of the Atlanta team was made, excitement over having an NHL team again took over the city of Winnipeg. The positive energy was so strong you could almost touch it. In order to qualify for an NHL franchise, 13,000 season tickets had to be purchased. After three days of pre-sale opportunities to Manitoba Moose ticket holders, ticket sales opened to the general public on June 4, 2011, and sold out in record time.

Today tickets for the game remain difficult to obtain and can be expensive. The availability and price point of tickets at the Gila River Arena appeal to many Manitoba fans.

fountain in pedestrian area outside arena

On the night I attended the game, the Gila River Arena appeared to be about half-full. Judging from the reaction to goals, penalties and other on-ice activity, the crowd seemed pretty evenly divided between Coyote fans and Jets fans. I don’t watch much sports as a rule, but the whack of hockey sticks against pucks and the scraping of blades racing across ice sounded like home. I remember Saturday evenings at my aunt and uncle’s house with everyone glued to Hockey Night in Canada on the television set. As a teen, I spent many evenings at the skating rink, cheering on our local hockey team.

Another reminder of home was the Tim Hortons concession stand, the only Arizona outlet of the iconic Canadian coffee and donut shop. As in the case at most Tim’s location, there was a long line-up waiting to buy Timbits, bite-size, round donut pieces.

The Jets lost the game with a final score of 4 to 1, but it was a fun experience, albeit a bit strange to watch a hockey game in the desert.

Phoenix Coyotes and Winnipeg Jets during their pre-game skate practice 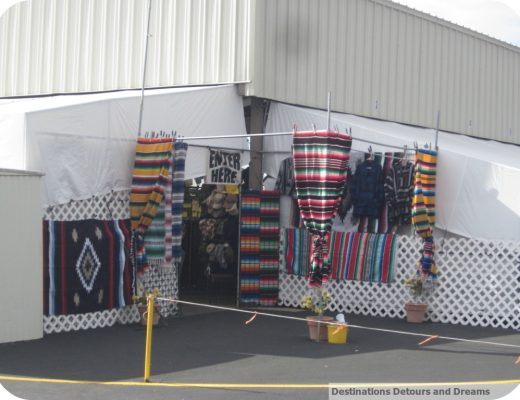