Images from across Canada

July 1 is Canada Day, a national statutory holiday celebrating Canada’s birthday. On July 1, 1867, the British North America Act, now known as the Constitution Act, created Canada as a self-governing federation. July 1 became a statutory holiday in 1879 and was known as “Dominion Day” until 1982, when it officially changed to Canada Day.

Communities across the country host organized celebrations on Canada Day, citizenship ceremonies for new citizens and outdoor events such as parades, festivals and concerts culminating in a fireworks display at dark. The largest celebration occurs on Parliament Hill in Ottawa, where thousands of people attired in red and white gather to hear concerts, participate in activities and view fireworks.

Canadians who don’t attend these organized events may celebrate in a more quiet manner, getting together with family and friends or spending the day at the lake. I spent part of my Canada Day looking through old photographs. It was not Canada Day nor thoughts of Canada which prompted my nostalgic viewing, but as I came across photos from travel across the country, I was reminded how beautiful and diverse our country is.

I share some of these photographs, a few of which date back to pre-digital days and now have an almost surreal faded old postcard look.

We start in the east, with mile 0 of the Trans-Canada Highway

Tapping maple trees at a sugar shack north of Montreal

The CN Tower in Toronto

View of Toronto from the CN Tower

Kleinburg, a village north of Toronto known for boutiques and cafes
and home to McMichael Canadian Art Collection, a gallery with emphasis on the Group of Seven artists

Canadian Museum for Human Rights and the Winnipeg skyline

Canola field on the Canadian prairie

Badlands around Drumheller in east-central Alberta

Kitsilano Beach with the Vancouver skyline in the background

Canada is a large and varied country. The sampling of photographs I’ve shared represent a small portion of the country. I feel blessed to have seen as much of the country as I have and hope to be able to experience more of it in the years to come and to return to some favourite spots as well.

What images come to mind when you think of Canada? Do you have some favourite photos? 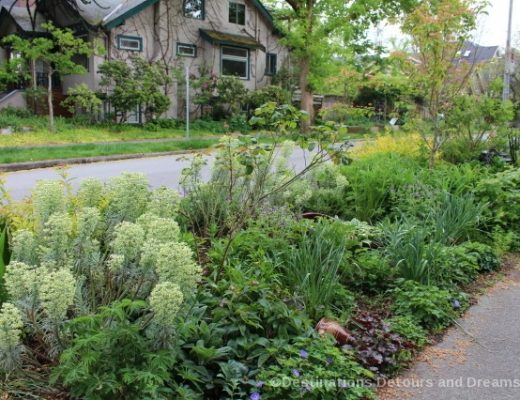