This past weekend I attended the Manitoba RV Show and Sale. There is something romantic about the idea of hitting the road in a recreational vehicle, be it a motorhome, campervan or travel trailer. The adventure of travel with the comfort of a home base. No fixed address and yet not completely homeless. The convenience of having what you need without packing, unpacking and repacking. Freedom and possibility.

For some, these types of vehicles are purely for vacation use. For others, they are the basis of a lifestyle. When Veronica and David James became empty nesters, they sold their house, bought a beat-up, second-hand RV, and became GypsyNesters. Blogging colleague Caroline Esquerra Colbourn of Generation Z: Cruising in an RV and her husband Bill lived and travelled in a motorhome for several years.

I don’t want to give up my home and live permanently on the move, but the idea of travelling in an RV for several weeks or maybe a few months has a great deal of appeal. I am aware there are aspects that are less than romantic. Small quarters may suffocate after a while. Hooking up to and unhooking from facilities is a chore. There are the practicalities of dumping and cleaning black water tanks, refilling freshwater tanks and general maintenance. Still an element of romance remains.

So far, I’ve made only one trip in a motorhome and that was almost twenty-five years ago. My husband and I visited England with my two-stepdaughters, ages eight and ten at the time, and our four-year-old daughter. In addition to time staying with friends, we planned a week and a half trip through southwest England. The type of budget hotels we were used to in North America were not common in England at the time. Other hotels could be expensive. I thought we’d stay at bed and breakfasts, but as the time for the trip neared I began to worry about keeping three young girls quiet, calm and amused in someone else’s home.

I don’t remember exactly how the idea of travelling in a motorhome came about, but it turned out to be great option. In spite of the fact that it drove like a big truck, was difficult to maneuver on narrow  lanes, and caused my husband a great deal of stress chugging up the steepest hill in England after I suggested we turn onto the scenic byway. We became adept at backing up to make turns we missed, with me standing on the road directing my husband about how far to back up and when to turn. We didn’t travel very far in a day, taking time to see sights along the way. When we stopped at the campground in the late afternoon, there was room for the girls to run and play. Sometimes there was a pool and a playground.  The motorhome experience created memories we wouldn’t otherwise have had. The people we met in campgrounds were mainly British on their summer holiday. There were a few Europeans. No other North Americans.

The campground at Camelford near Tintagel was on the grounds of a working farm. The farmer took children staying in the campground with him on his twice-daily rounds to feed the animals. My eldest step-daughter got a pony ride in the morning before we left. We learned about tides at Porth Beach. When we pulled into the campground in the early evening, the water lapped at the edge of the road on the other side of the campground. The next morning we thought we’d have a short walk to the beach. We crossed the road and saw an expanse of sand extend before us. We walked and walked and walked to the water’s edge. At Seatown, we were parked on a cliff overlooking the English Channel. The pub down the hill served an excellent curry.

The RV Show and Sale

The Show this past weekend contained a variety of motorhomes, fifth wheels and travel trailers. With slide-outs, some were large enough to feel almost like a regular apartment. These large units are popular with snowbirds who take them to a warmer destination for the winter and with families who park them at a lake all summer.

Of course if you buy a big trailer or fifth wheel, you need a good truck

Years ago when I wandered through RV shows, I was drawn to units with bunks for the children. Now I bypass these units. I am drawn to more compact units. I wouldn’t need a large bathroom, but a toilet and separate shower would be desirable. I’m not sure how I feel about the toilet and shower combos.

The compactness of this unit was appealing, but it may be too spartan. The ladder and sleeping bunk might be too dangerous for a klutz like me.

Different RV layouts will suit people differently. It may be difficult for a first-time buyer to know everything to look for. There were a number of items I knew I’d look for or avoid after our England rental experience. These were things I would not have considered before renting. There is only item on that list I still remember. I did not like how the door was blocked when the sofa was folded out into a bed. At the RV Show, many units had me wondering where I’d store a broom or mop.

Lots of comfort in small spaces

I am not in the market for a RV. Given that our travel desires include places we wouldn’t take an RV, it doesn’t make sense to spend our travel budget this way. Still it would be fun to do a trip or two in a motorhome. And I continue to look for the perfect balance between comfort and easy mobility, even if it is only daydreaming.

Have you spent time travelling in an RV? Would you like to? 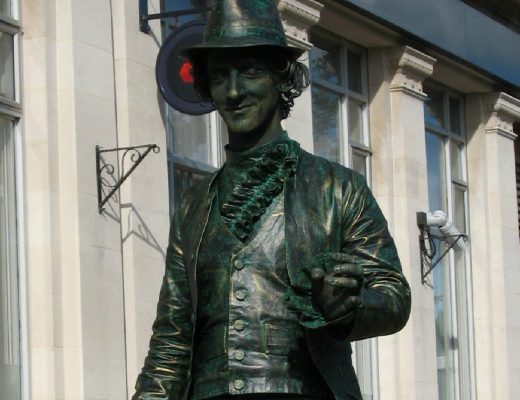