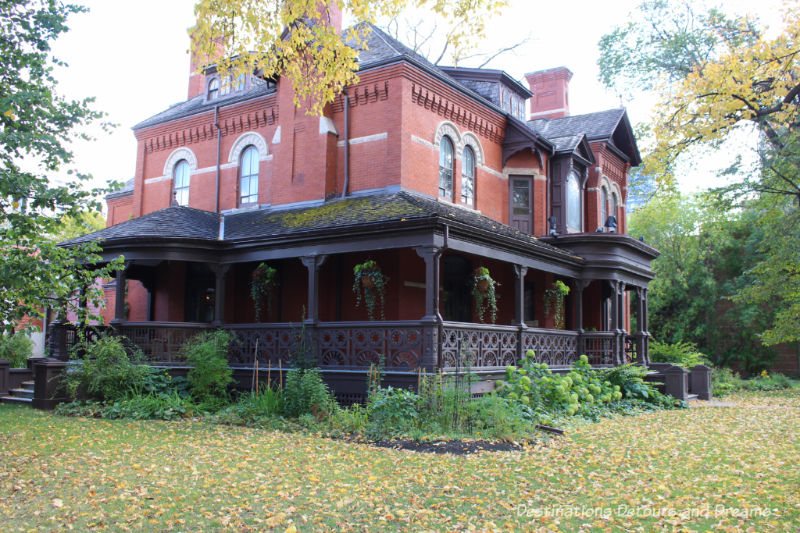 offers a look into upper-class life of the late 1800s

Dalnavert was the former home of Hugh John Macdonald and his family. Hugh Macdonald, son of Canada’s first Prime Minister Sir John A. Macdonald, was a magistrate and a Premier of Manitoba. The house, restored and decorated in period style, is now a museum.

The Queen Revival House was built in 1895. Hugh Macdonald moved to Winnipeg from Ontario after the death of his first wife. Winnipeg was booming. Hugh may also have seen it as an opportunity to get out from under the shadow of his father. He lived in Dalnavert with his second wife Agnes, their son Jack, and his daughter Isabella from his first marriage. Hugh had been encouraged by his father to become a lawyer. He was a well-respected lawyer. My tour guide said the same could not be said for his father, whose partners were not happy with Sir John’s neglect of the business to pursue politics. 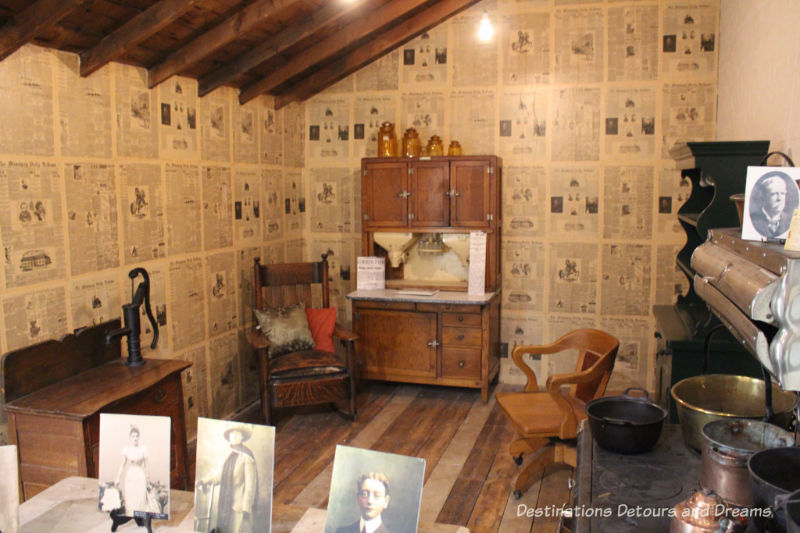 The first room one enters on a tour of the house is the summer kitchen. The stove was moved here in the summer and back into the main kitchen in the winter. Old newspaper articles cover the walls. The wood in the room is original. When I entered this room on a late September day, a pleasant wood smell greeted me. My tour guide told me the boiler had been turned on two days prior and the wood was reacting to the new heat by releasing that aroma. 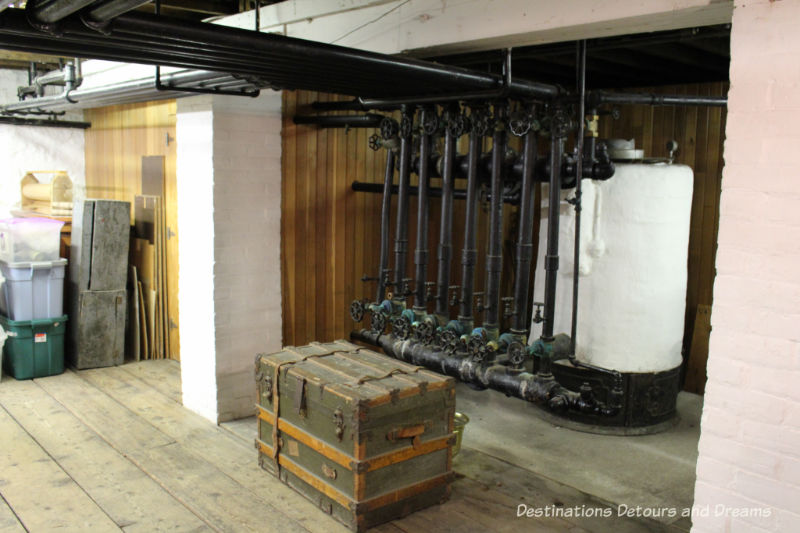 The original coal-fueled boiler has been replaced with a gas boiler, but the the original piping and radiators are still in use today. The basement floor has wide wood planks with small cracks, which allowed water to drain when the Assiniboine River rose and got into the basement. Underneath is dirt and a layer of gravel. 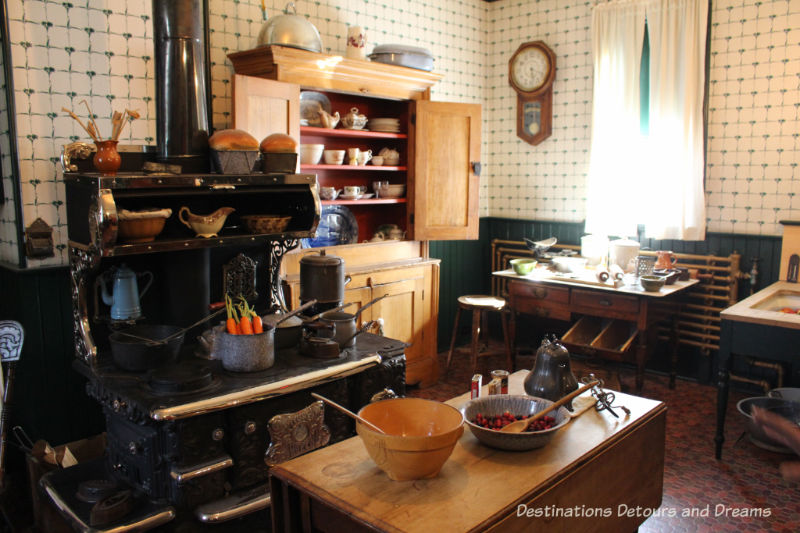 The house had all the modern conveniences of the day. It had a coal boiler, hot running water, and electricity. An intercom system linked 16 rooms to the kitchen with bells to summon servants. A speaking tube connected the kitchen to Mrs. Macdonald’s dressing room so servants could find out what she wanted before running to her room. There was a telephone. At that time, there was no dialing. Pick-up connected you to an operator. 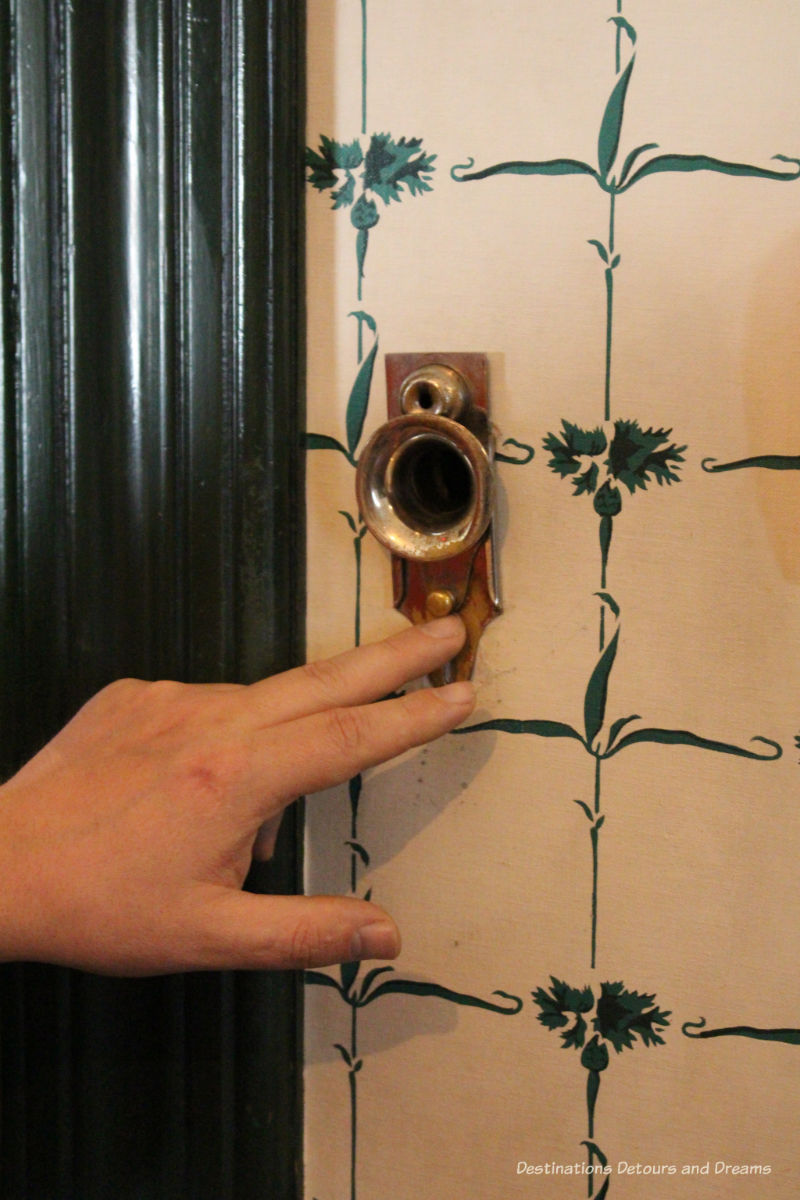 Speaking tube in the kitchen 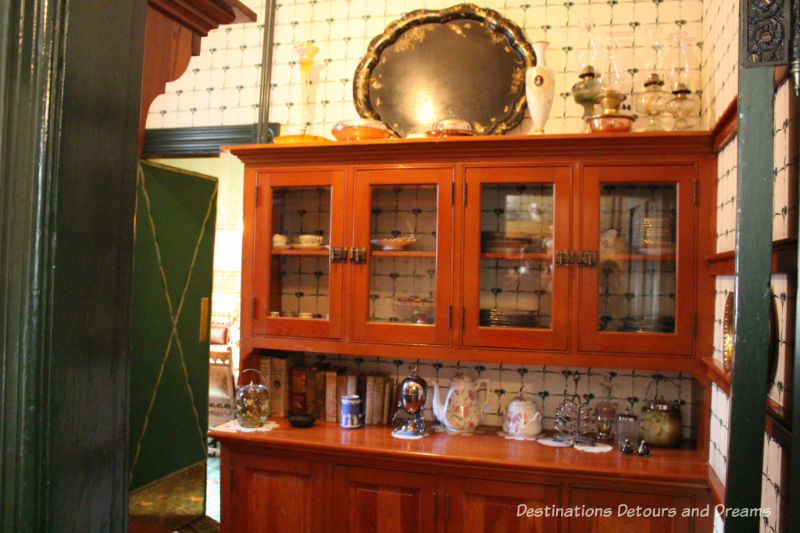 The house has a servery between the kitchen and the dining room. This was used to set out food prior to serving and to store the dishes away from the kitchen so they’d stay cleaner. It was not called a butler’s pantry. The Macdonalds never had a butler. 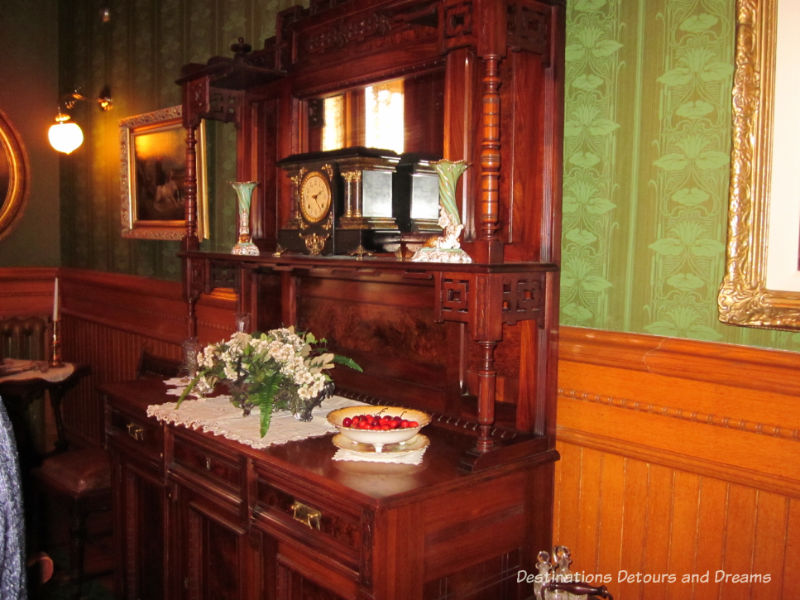 The dark wood pieces and dark tones of the dining room were typical of the late Victorian era. The wallpaper is a reproduction of what was discovered on the walls when layers of paint and wallpaper were peeled away during restoration. Very few of the furnishings in the museum actually belonged to the Macdonalds, but they are appropriate to the period and represent what the house would have looked like at the time. 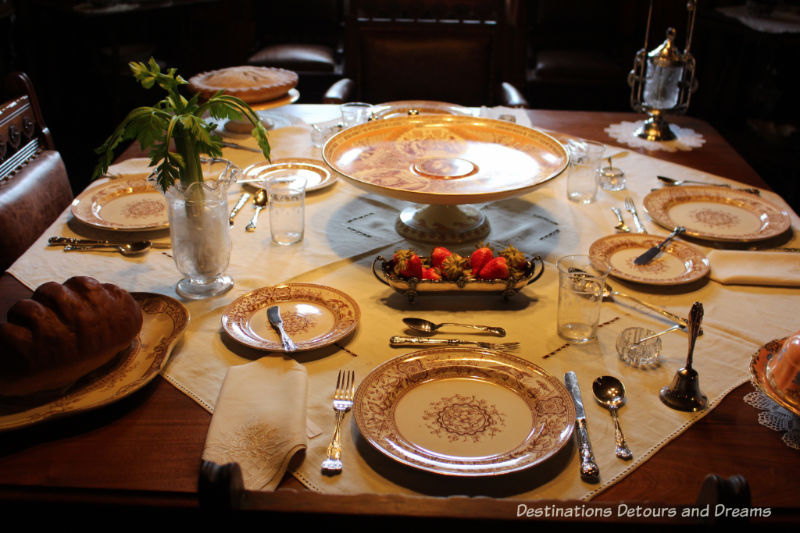 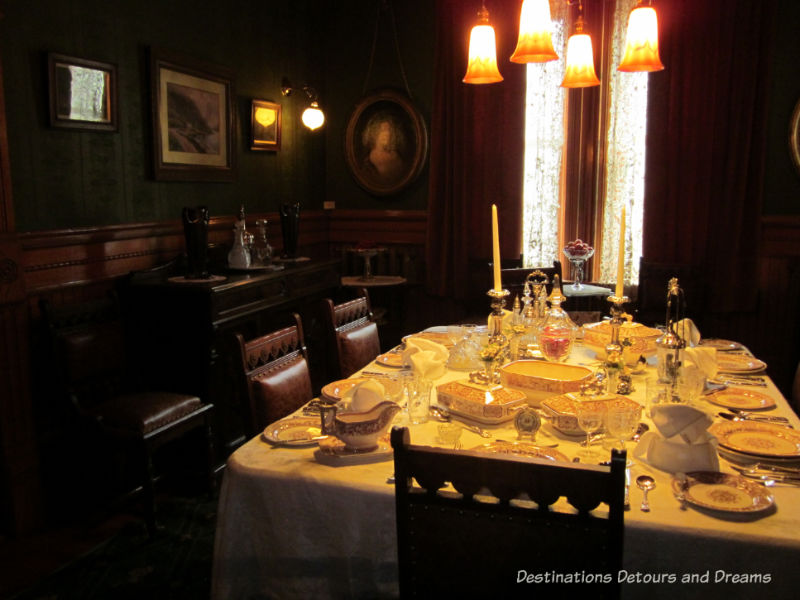 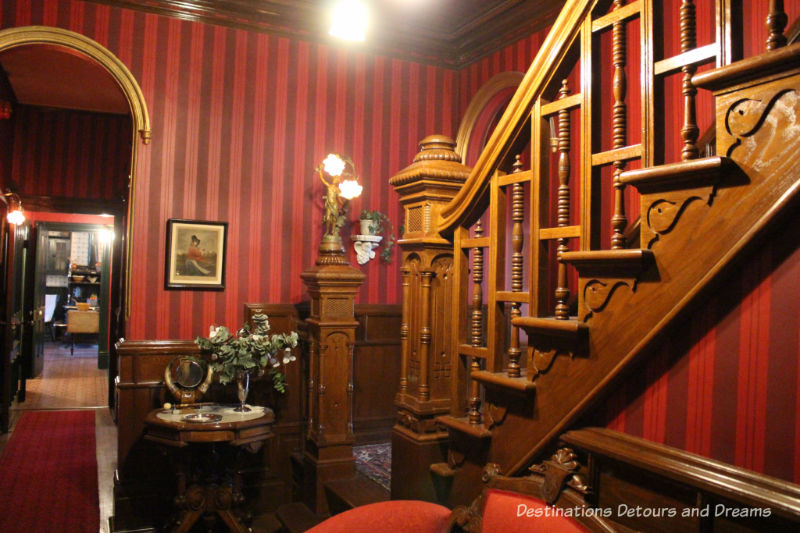 The front entrance area would have been designed to impress. The stairs, which had been moved twice during the life of the house, are now in their original location. 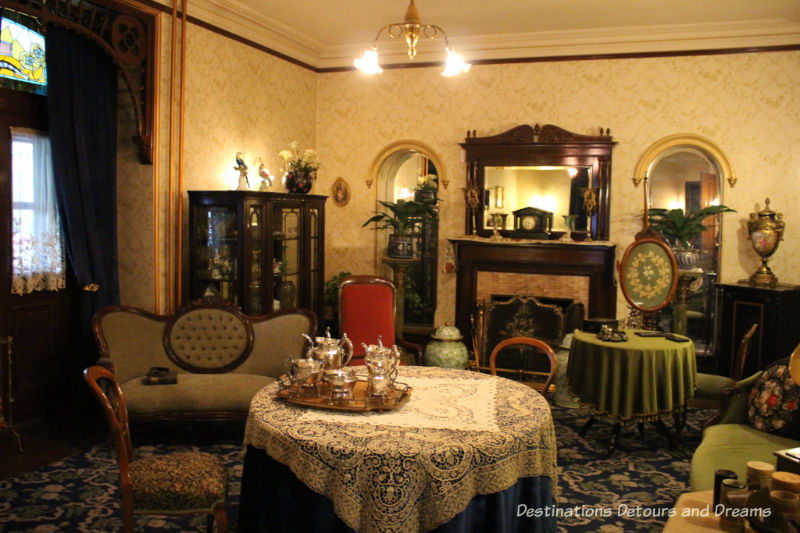 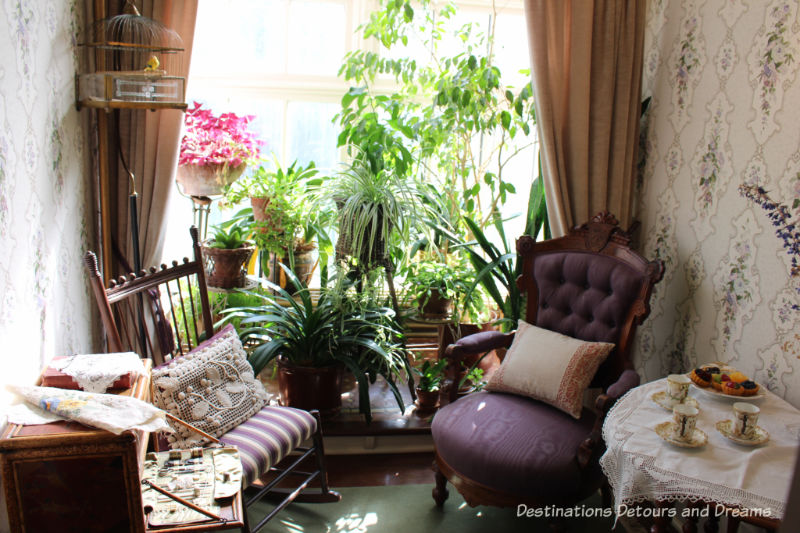 The small sunroom is my favourite room in the house. It is where Agnes Macdonald spent time, writing letters or entertaining lady friends over tea. Beside it, at the front of the house is Hugh Macdonald’s study. He had a law office where he would work with his clerks. But when he met with clients, it was either at their homes or in his home office. 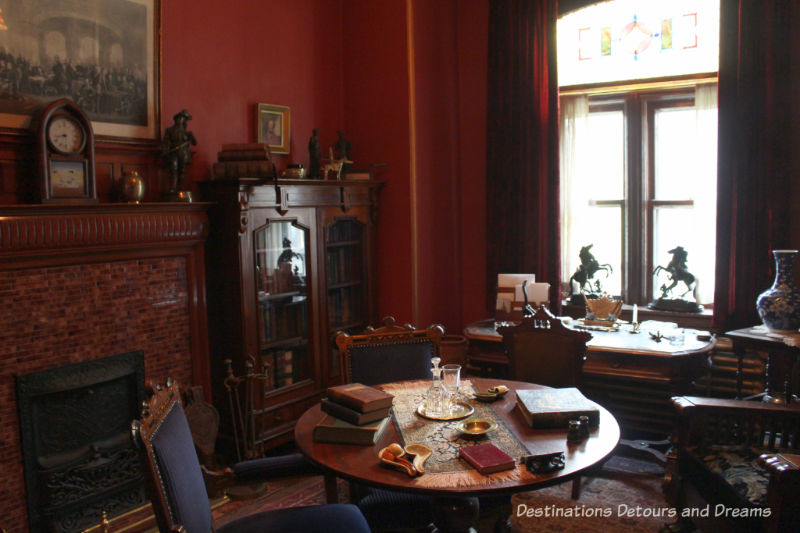 When Hugh John Macdonald worked as a police magistrate, the majority of crimes he dealt with were robbery or vagrancy. Vagrancy was a big issue at the time. Macdonald was known to bring vagrants home and house them in his basement until they could find a place to stay. There were few social services or government programs. It was up to the wealthy to take care of the less fortunate. Hugh John Macdonald was known for his compassion. He would often suspend sentences and find jobs for youth. Macdonald Youth Services, which provides foster and group care, community support services, and transition services, was established in 1929 and named in honour of Hugh John Macdonald. Macdonald displayed a less kind side when he served as magistrate during the 1919 General Strike and sent immigrants arrested during the strike to an internment camp from which they were eventually deported. In 1913, he was made a Knight Bachelor and became Sir Hugh John Macdonald. 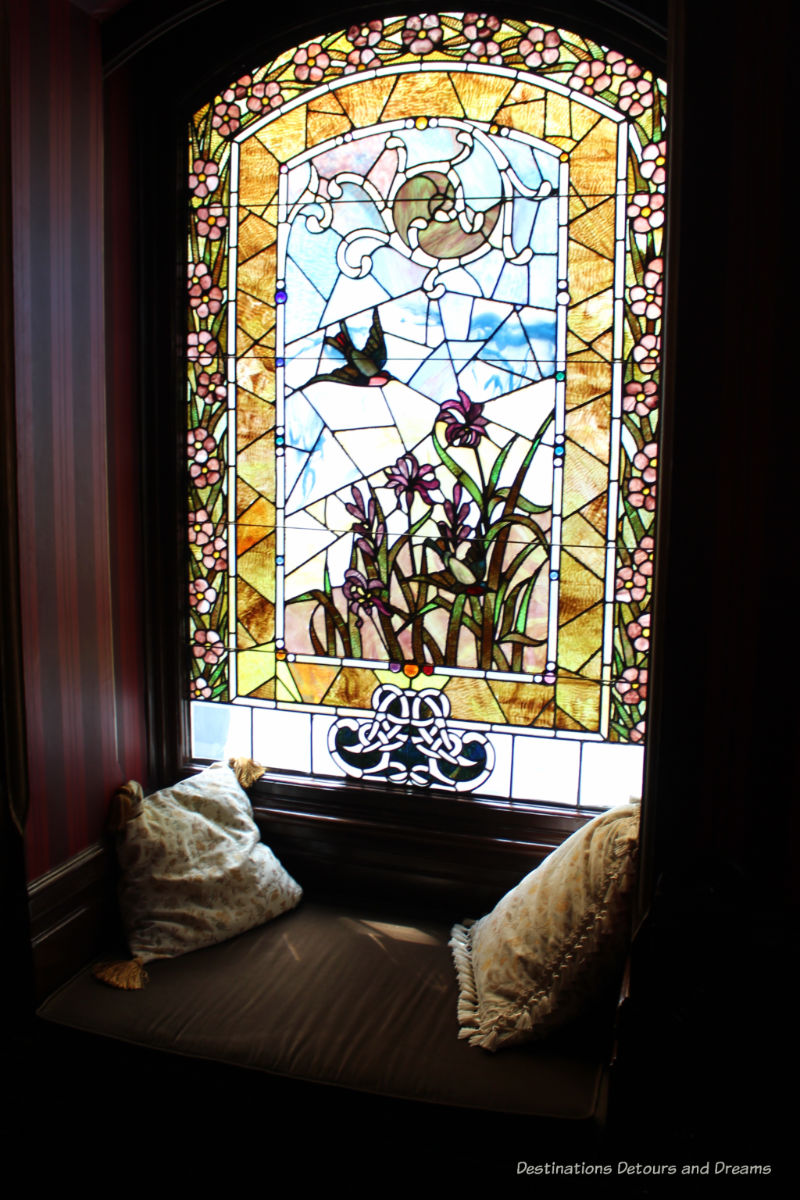 Stained glass window seat at top of the stairs. 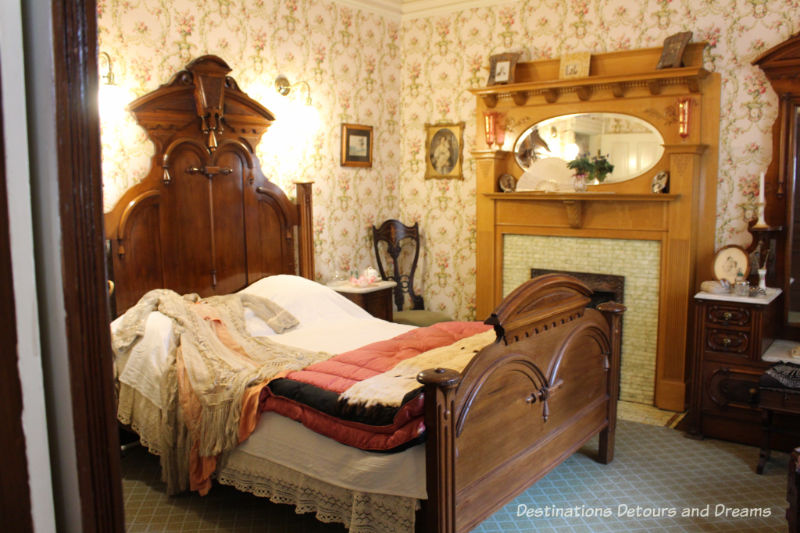 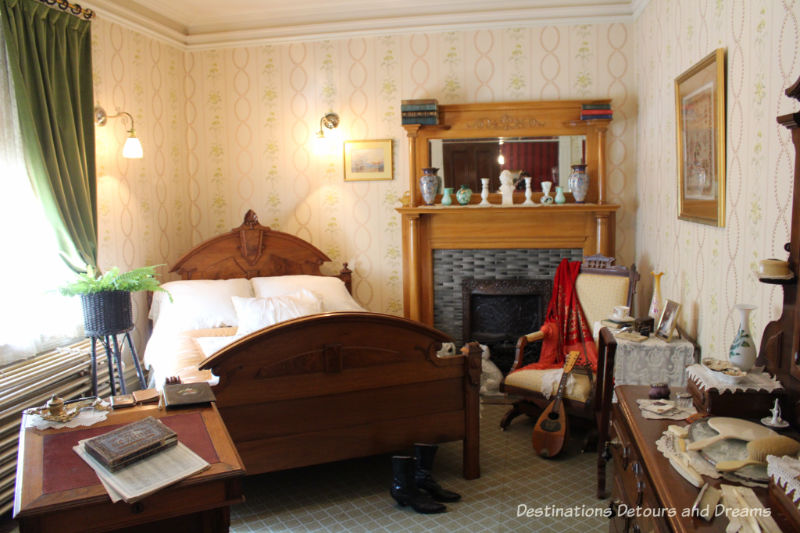 Hugh’s daughter Isabella, who was most commonly referred to as “Daisy”, was already a young woman of seventeen when the family moved into Dalnavert. She had a parrot as a pet and was an unconventional Victorian woman who loved fencing and pistol shooting. She played the piano and the harp and dabbled in acting. She was active in Winnipeg’s social scene. She married in 1915. 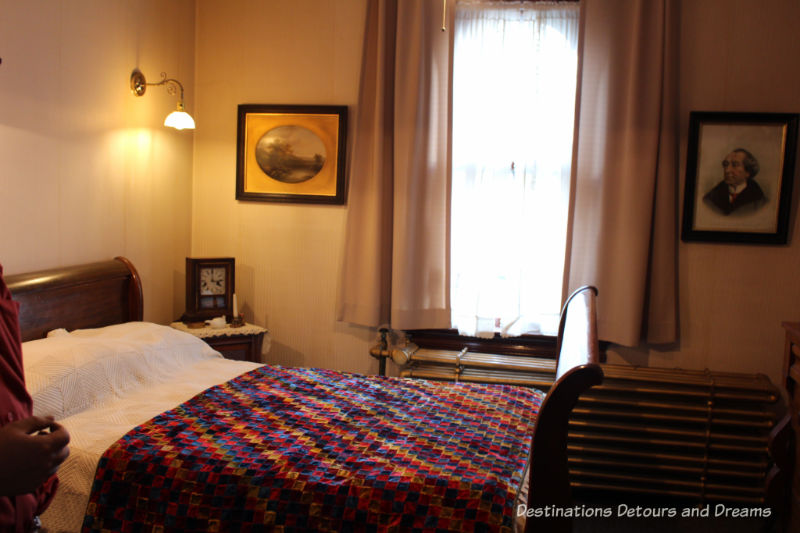 Hugh and Agnes’s son Jack was diagnosed with diabetes which was difficult to treat during the Victorian era. He was confined to his room at times. Other times he lived a normal, active life. He studied law at the University of Manitoba, but died before he could finish his degree. 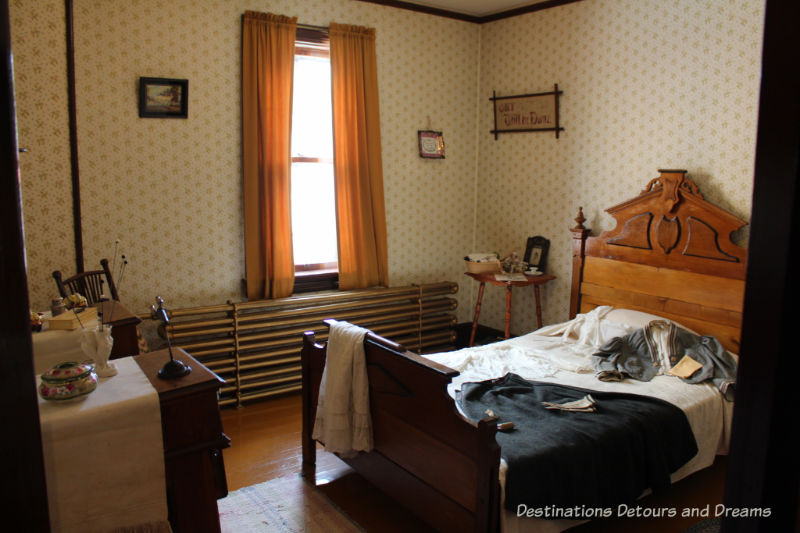 The family employed a cook and a maid who lived in the house. Their bedrooms at the back of the house were simpler than those of the family, but still spacious and comfortable for servants’ rooms. Given their positions with such a respected family, they would have had an elevated standing among their peers. They would also have been expected to conduct themselves with a certain decorum and represent the family well. 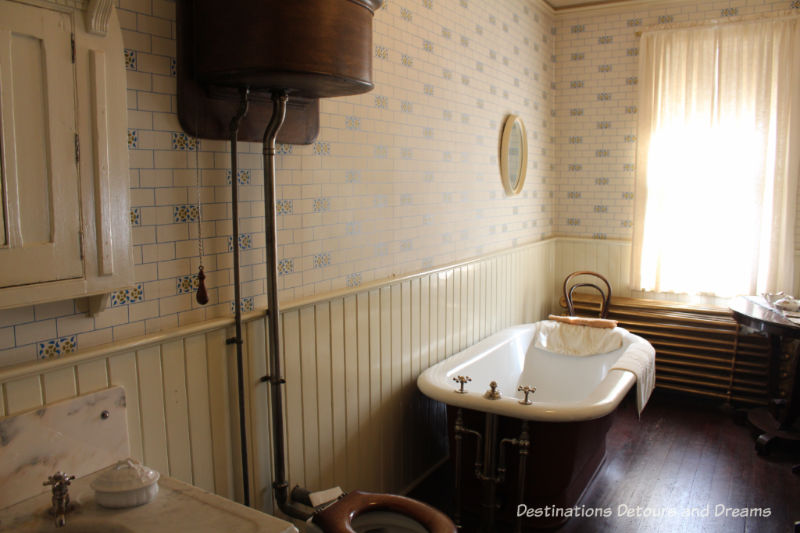 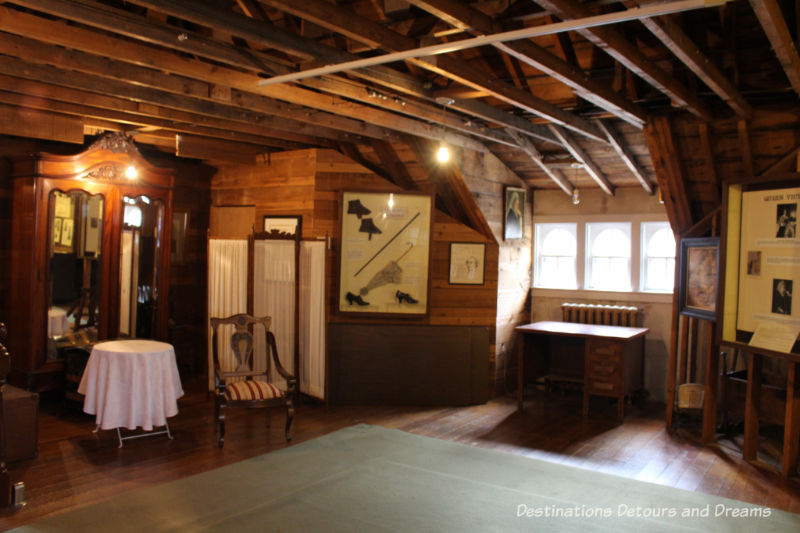 The Macdonalds used the attic mainly for storage, but it is likely the room was originally designed as a billiards room.

Hugh Macdonald died in 1929. After his death, the house was owned by several people who transformed it into a rooming house. In 1969, it was sold to a company who intended to make the grounds a parking lot. The Manitoba Historical Society bought the house from the development company. Restoration work cost $559,000 and took several years to complete. Much of the restoration money went to leveling and firming up the foundation. Although a solid house, gumbo shifting had taken its effect on the red brick, granite stones, and solid beams. The Society ran the house as a museum until 2013 when it closed the doors due to operating concerns.  A non-profit group The Friends of Dalnavert Museum resurrected the museum in 2015 and continues to operate it today. Dalnavert was designated a National Historic Site of Canada in 1990. Volunteers maintain the heritage garden surrounding the house. 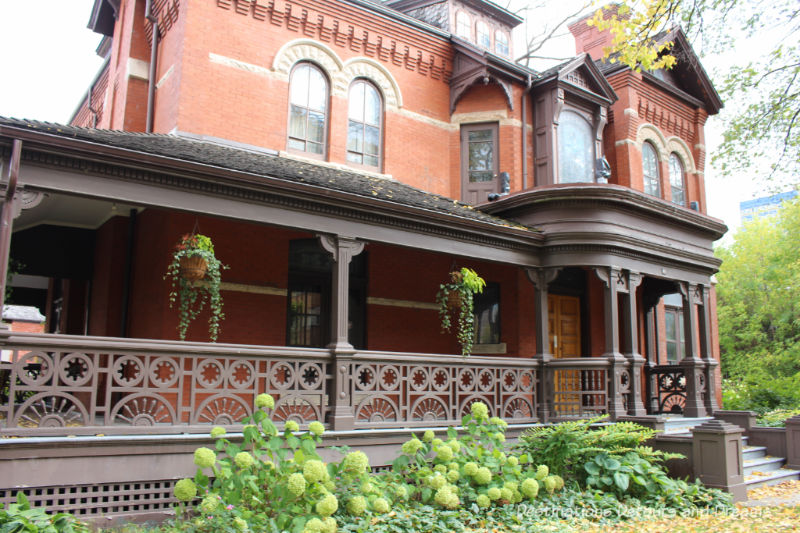 The house has a large wrap-around veranda.

Dalnavert Museum is open afternoons Wednesday through Sunday. Tours take approximately forty-five minutes. Guides are happy to adapt the tours for visitors. Special events occur throughout the year, both in the house itself and the attached Visitor Centre at the back. Check the website for hours and upcoming events. 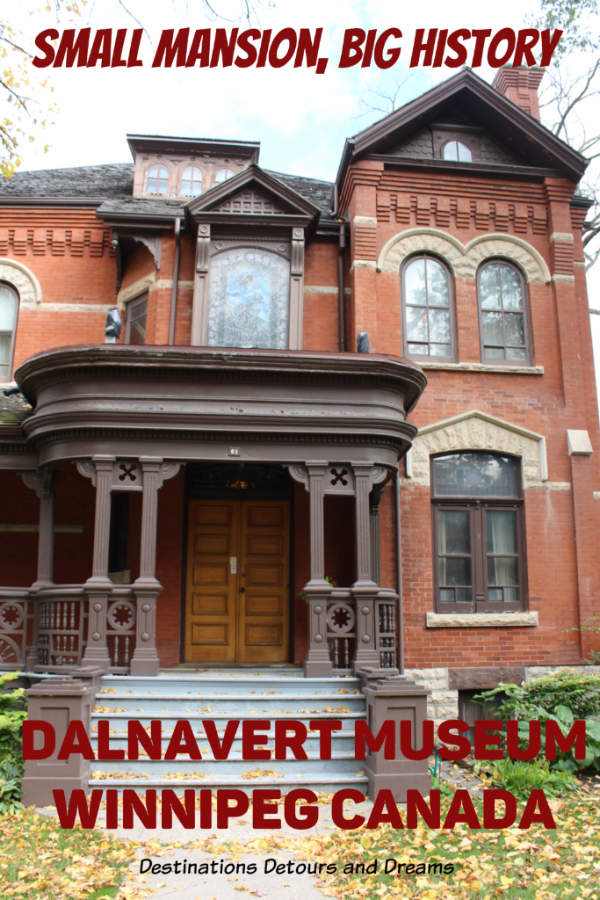