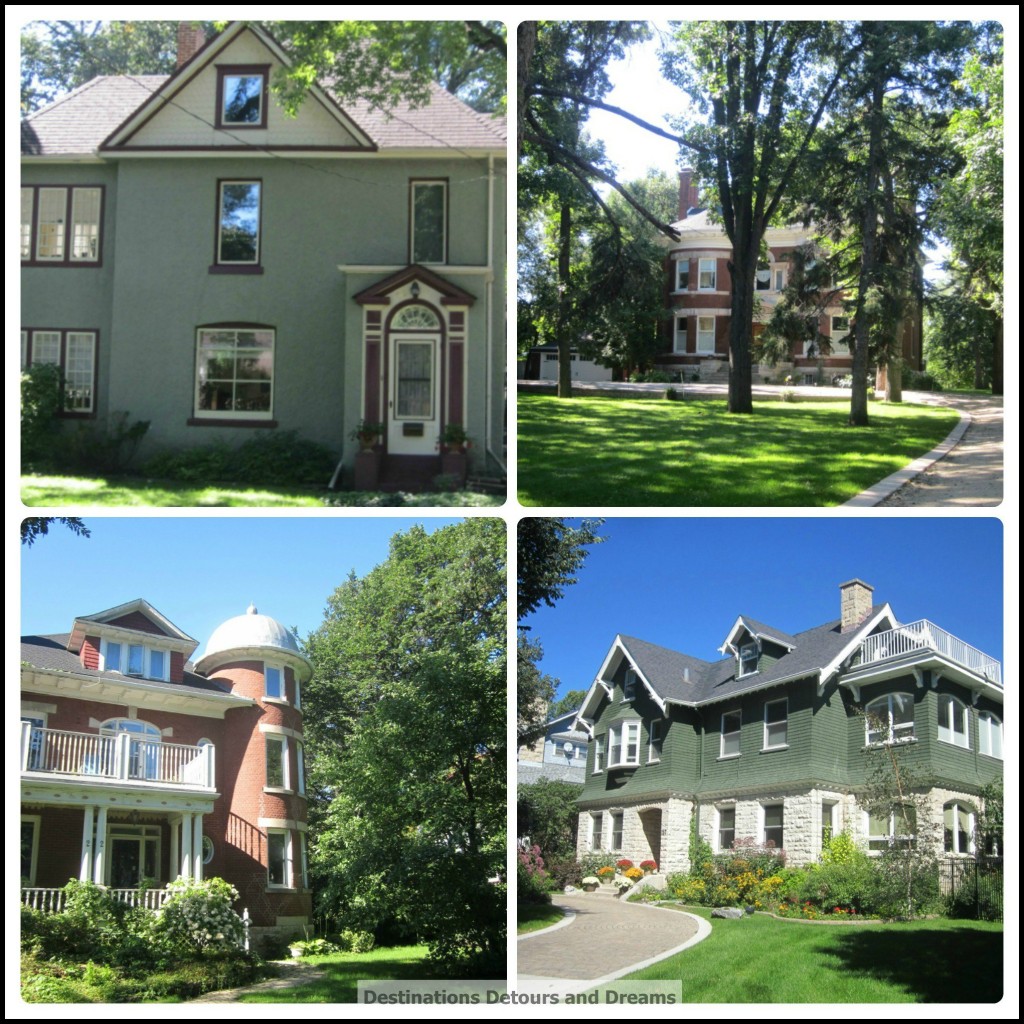 The history inherent in hundred-year-old houses tells us things about the time period in which the home was built as well as something about the intervening years, when the houses were modified and adapted to meet the needs of the residents. Restoring hundred-year-old houses requires a respect for that history, a love of the past, and a lot of labour. This past weekend I got a glimpse into that history, respect, and labour at the Armstrong’s Point Heritage House tour in Winnipeg, Manitoba.

Armstrong’s Point is a small peninsula jutting into the Assiniboine River near the centre of the city. The land was granted by the Hudson’s Bay Company to Captain Joseph Hill in the mid-1800s. Hill returned to England five years later and left his batman James Armstrong in charge and the area became known as Armstrong’s Point. Today, 73 of the 112 houses on the point are listed by the City of Winnipeg as Historically Noteworthy. 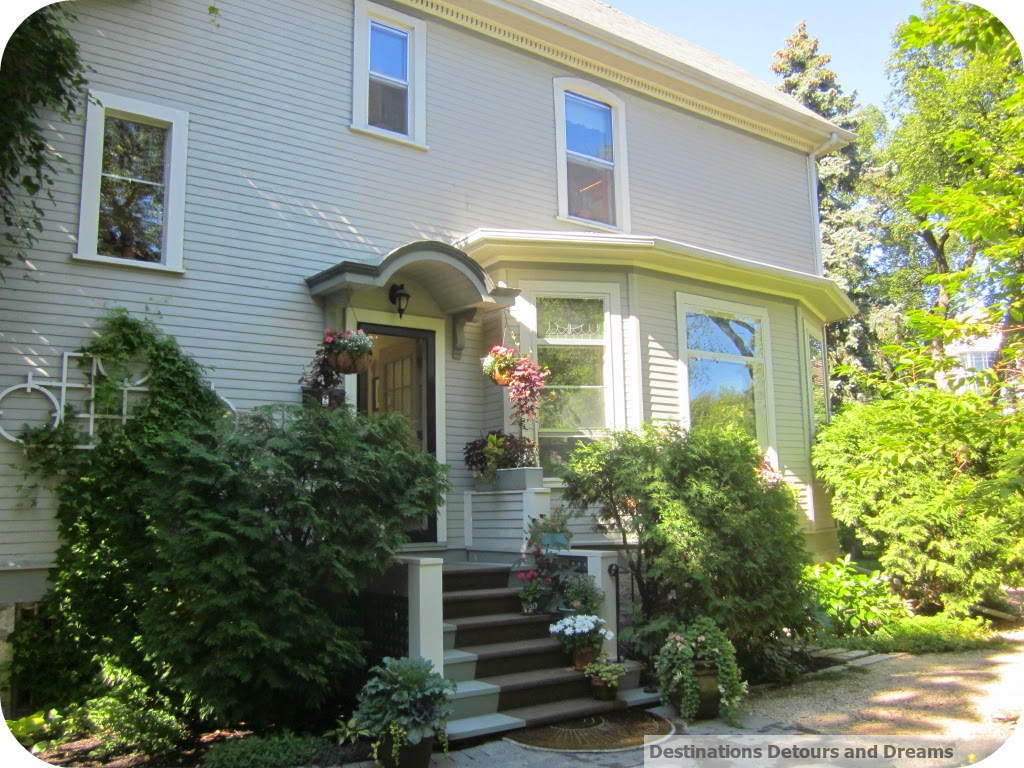 This house was originally constructed in 1904 on Furby Street and moved to Armstrong’s Point in 1929. The house had a varied history and has served as a family home, a rooming house, and a disco-era party headquarters. The current owners bought it in 2002 and claim to have found it in a sorry state. They have spent the last 12 years renovating and restoring.

A diagram of the house in the Provincial Archives showed it once had a wrap-around porch. The current owners replaced the porch, but choose not to extend it as far as it had been originally because they didn’t want to cover the front bow window. 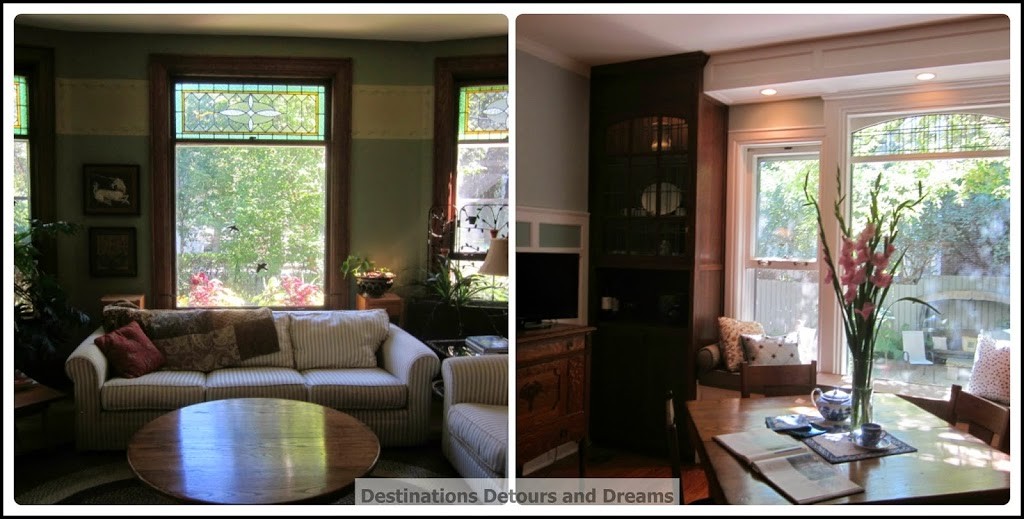 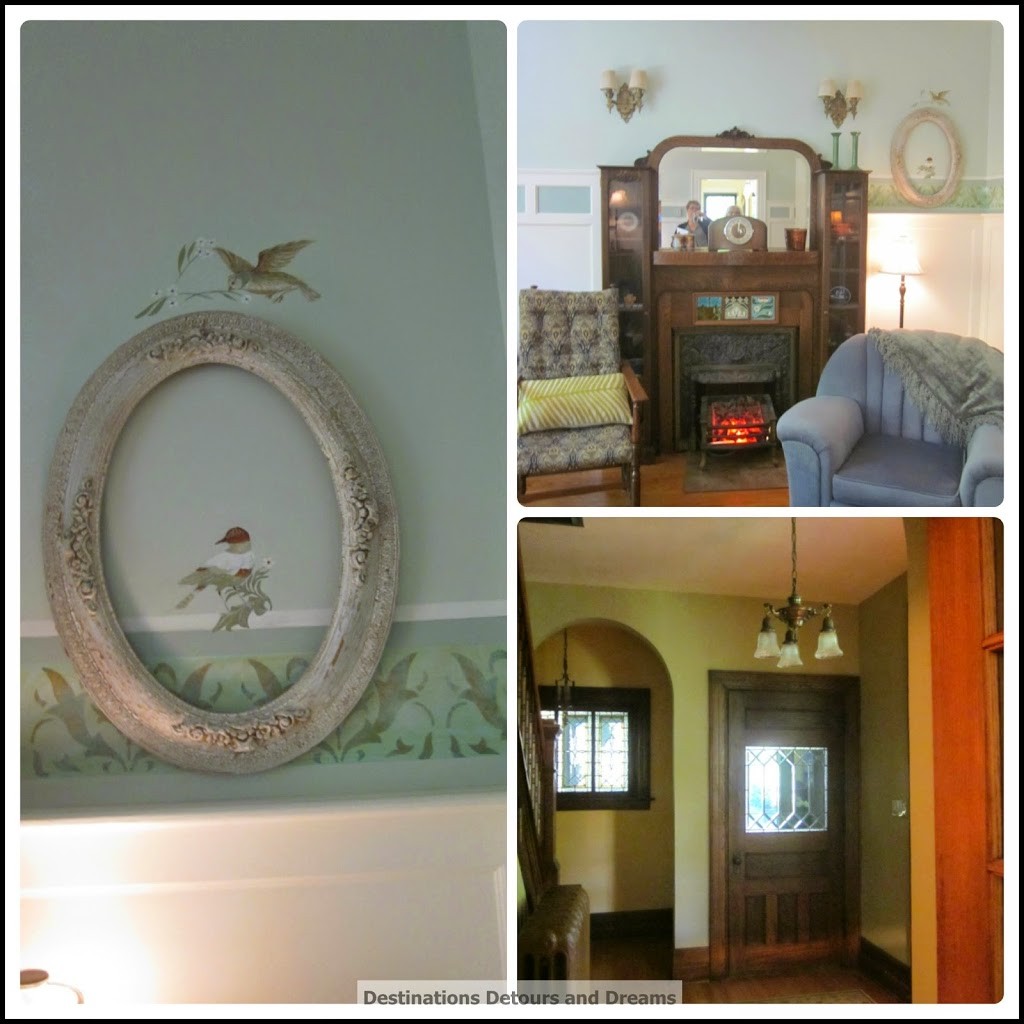 Many of the walls contain stencils done by the current owner. The stencils were adapted from designs by William Morris and M.P. Verneuil, popular at the time the house was built. A fir fireplace mantel found in the upstairs of the house and painted pink was refinished and moved into the dining room, along with an electric fireplace and wall sconces found in other parts of the house. The only light fixture original to the house is in the alcove by the stairwell. All other fixtures were purchased at architectural auctions. 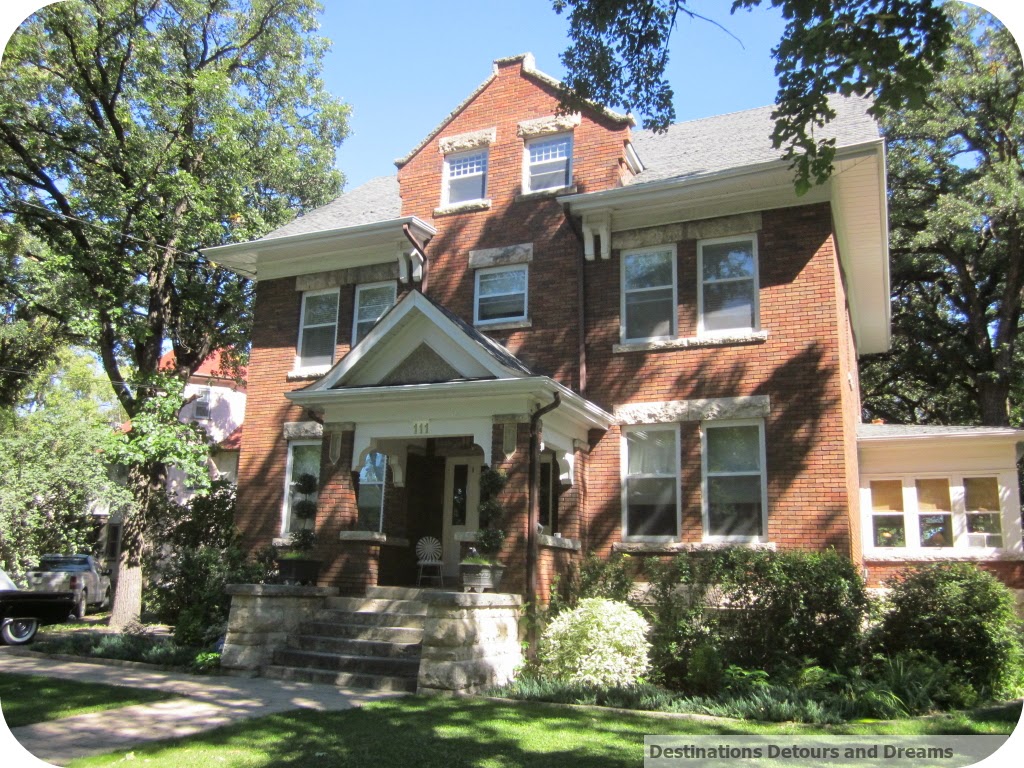 This house was built in 1913. By 1956, it had become the residence of six families and two boarders. This was five more families than allowed by the Winnipeg City Code. The owners tried to convert the house to a triplex, but the plan was opposed by the Armstrong’s Point Association on the grounds it was an ad hoc project and needed an architect’s input. For forty years until the current owner purchased the home in 2001, it was owned by the Oblate Fathers and had evolved into an office building.

The new owners removed indoor/outdoor carpets glued to the floor and refinished the flooring underneath. They scraped layers of wallpaper from the walls. In the first 8 months, they hauled 25 half ton loads to the dump. The loads included plaster from ceilings that collapsed, carpeting, 6 sinks, what they called “unfortunate carpentry”, volunteer trees, and plastic plants. 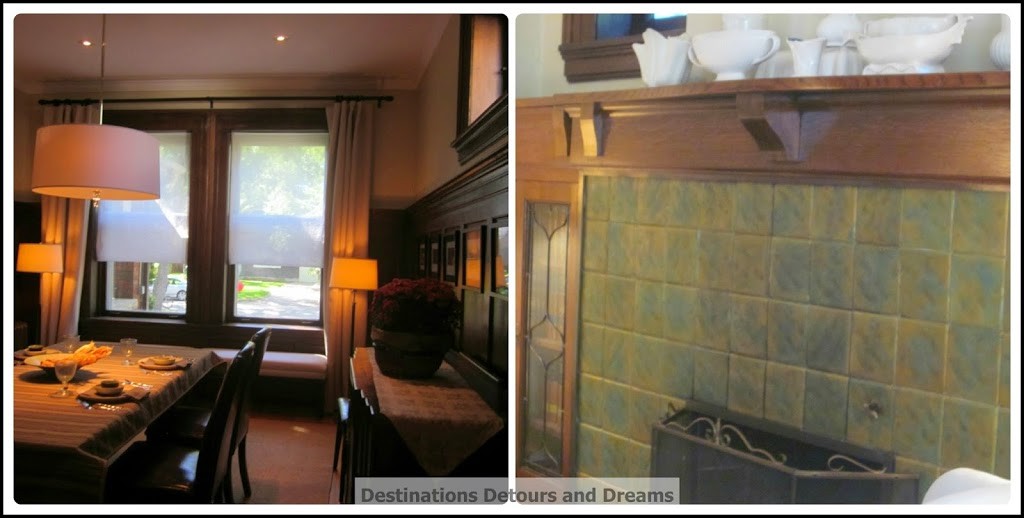 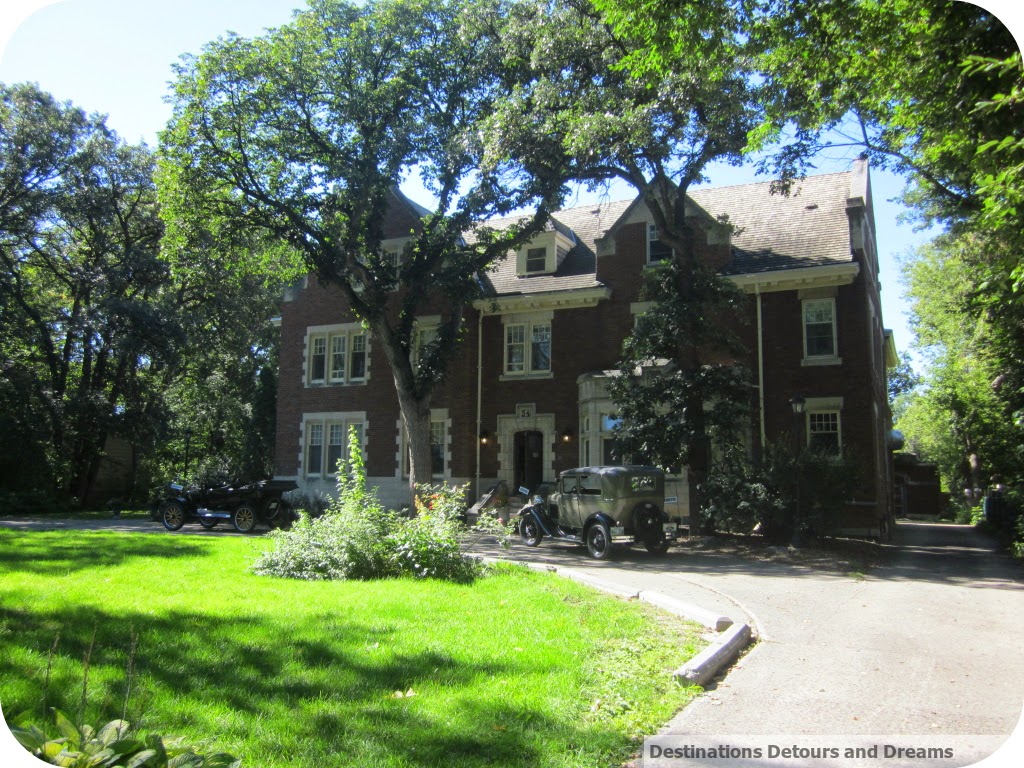 Ralph Connor House was built in 1914 in the Jacobethean Revival style. Ralph Connor was the pen name of Charles Gordon, who wrote 24 novels, mostly adventure stories set in the Canadian pioneer wilderness. His books include Black Rock, Sky Pilot, and The Man From Glengarry. After his death, the house reverted back to the city due to unpaid taxes. The University Womens Club of Winnipeg owned it for a while. It is now owned by the Friends of Ralph Connor House and used as a meeting place for promoting education, social justice, and healthy communities. 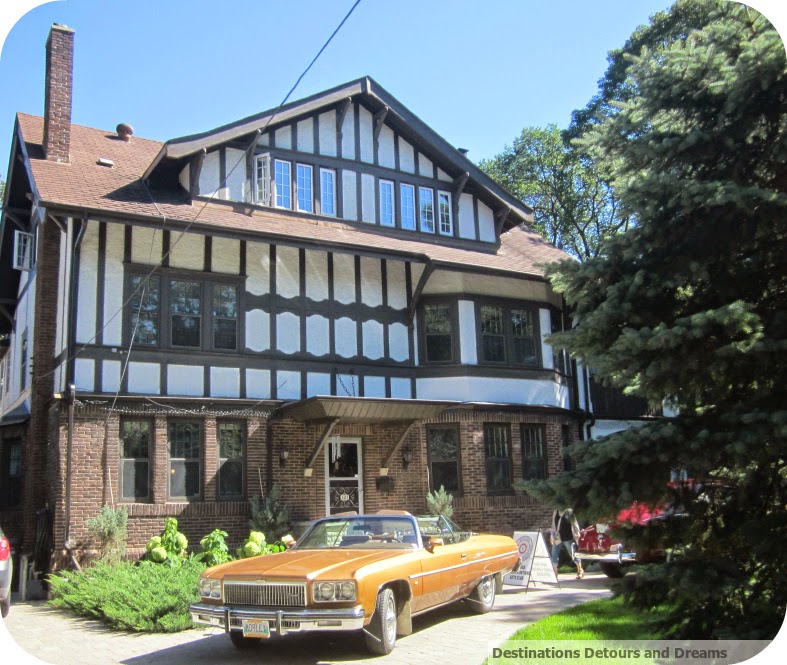 This house, in Tudor Revival style, was built in 1912 for David Horn, a chief grain inspector, for a cost of $15,000. It included a billiards room on the third floor. The house was duplexed in the 1950s. Purchasers in the 1980s restored it to a single-family dwelling. 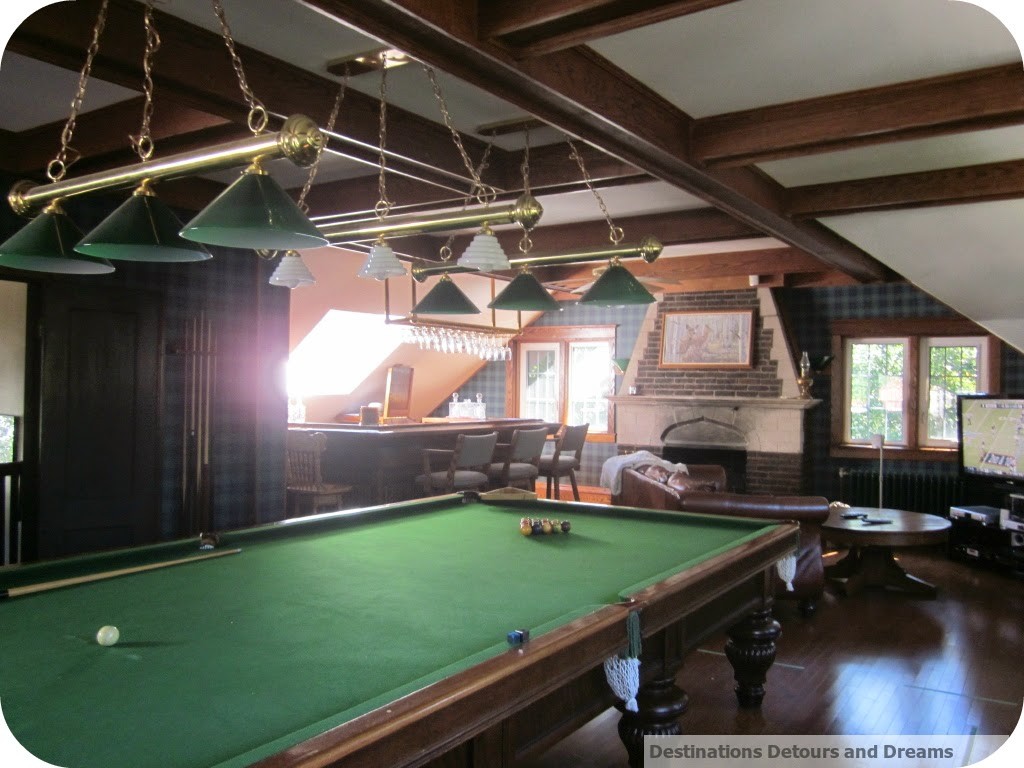 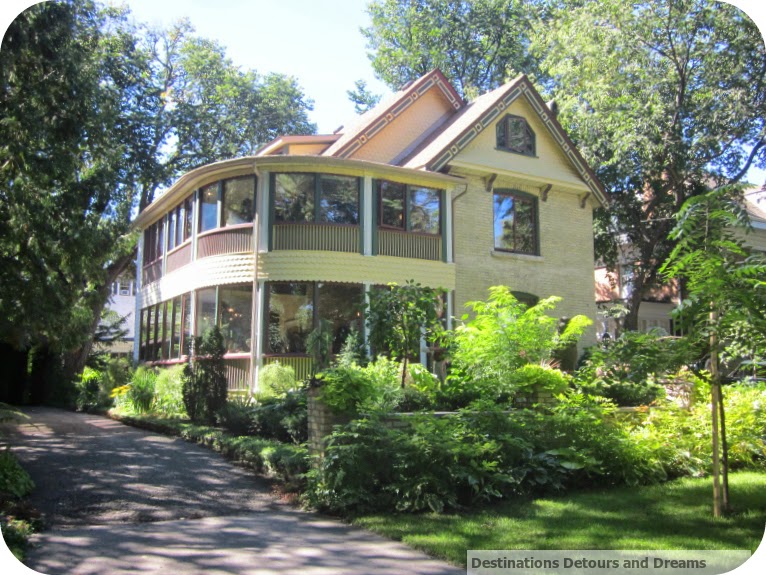 Construction on this house on Eastgate began in 1894 but did not complete until 1896 because the contractor had overextended himself. The current owners bought the house 17 years ago. They say they had pigeons for roommates on the second floor when they moved in and the wrap-around verandah, which had been added in 1920, was falling down. Among other renovations, the owners rebuilt and extended the verandah, turning it into a four-season sun room on two levels. 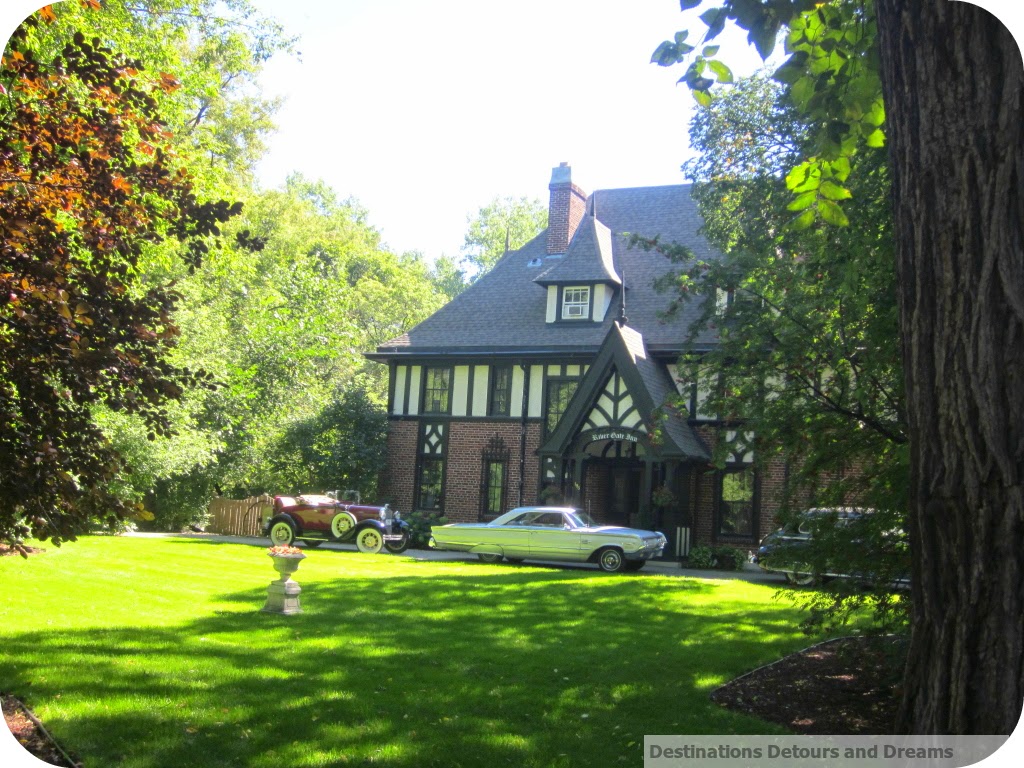 The house at 146 West Gate was built in 1919-1920 by R.T.Riley, founder of Canadian Indemnity and other businesses. Today the house operates as a bed and breakfast: River Gate Inn. The exterior of the house was used in the filming of Home Alone: The Holiday Heist. 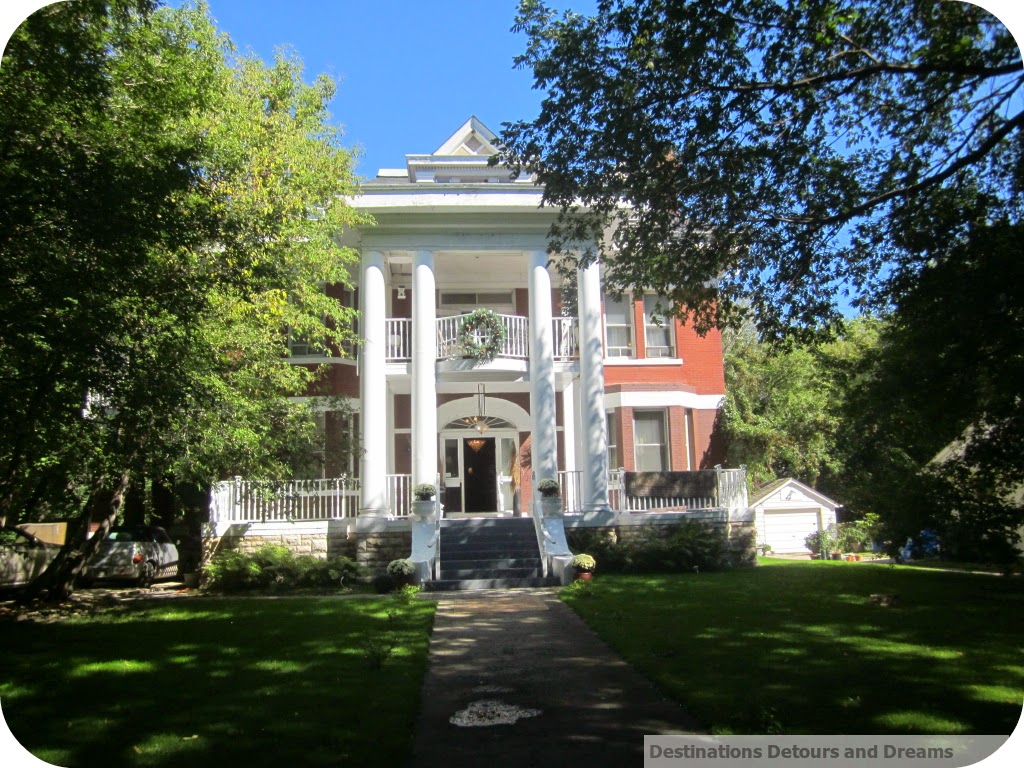 The house at 5 East Gate is also currently being run as a bed and breakfast: The Columns. It was originally built in 1906 for Thomas Ryan, a pioneer boot and shoe merchant, for a cost of $18,000. Ryan’s fortune was short-lived and he lost all his business properties and this house in 1916. The tour did not provide much information on the history of the house since then,but mention was made of it being used as a nursing home at one time. The current owners renovated and restored the house, turning it into a bed and breakfast when their children vacated the home. 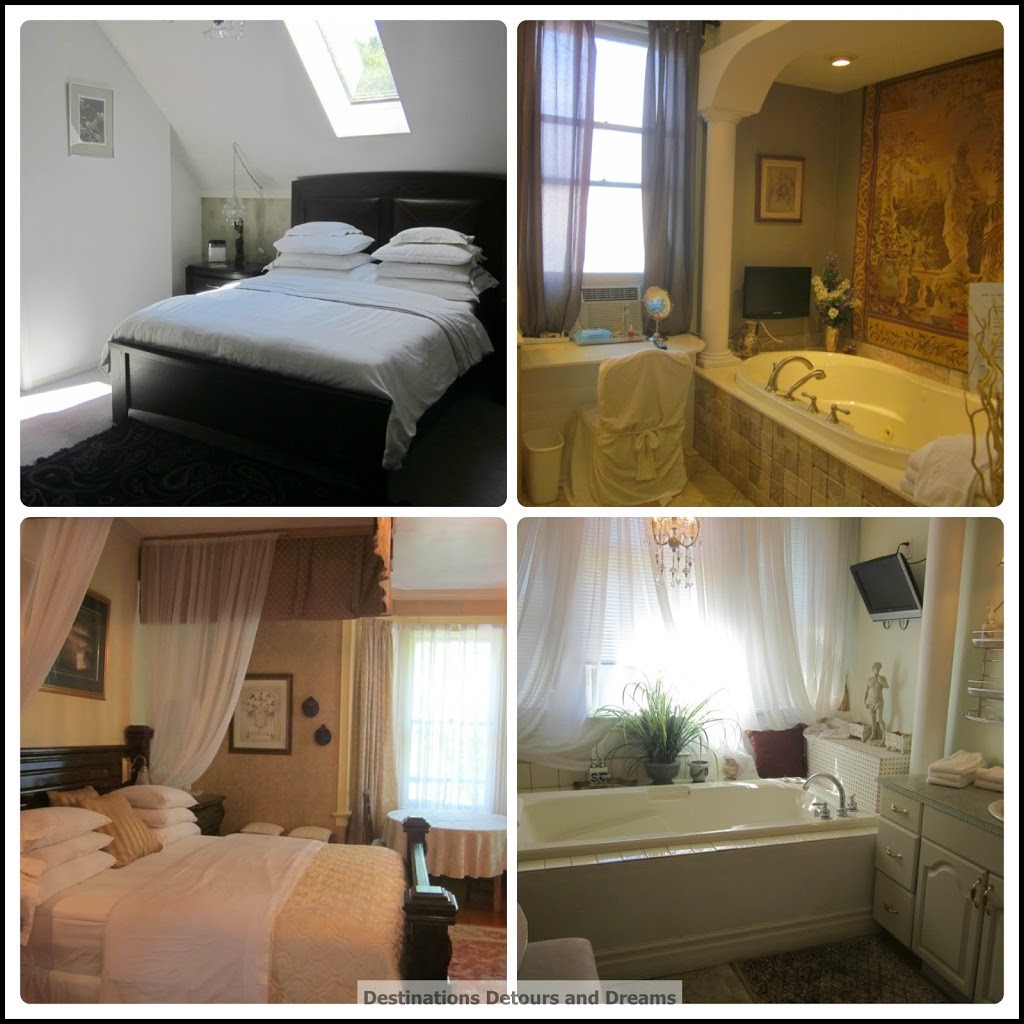 Although The Columns retains restored vintage features such as woodwork, built-in bookcases, and an original chandelier,
you can see from the sample of rooms that the bedrooms and bathrooms offer modern comforts to guests.

Other rooms at The Columns Bed and Breakfast: dining room, a balcony off one of guest suites, a room on the back patio

A sample of other rooms encountered on the tour: sun room and dining room at the Tudor Revival house, sun room at River Gate Inn

One owner said what they bought 13 years ago was not a house, but a project and although renovations have slowed down now they will likely continue long after the house is passed on to the next family. After 12 years of restoration another owner says the things they worked on first are now in need of work again and claims the house will never be “finished”. A third owner calls their house a work in progress, after 17 years of renovation. I feel privileged to have been able to seen the fruits of their labours of love. 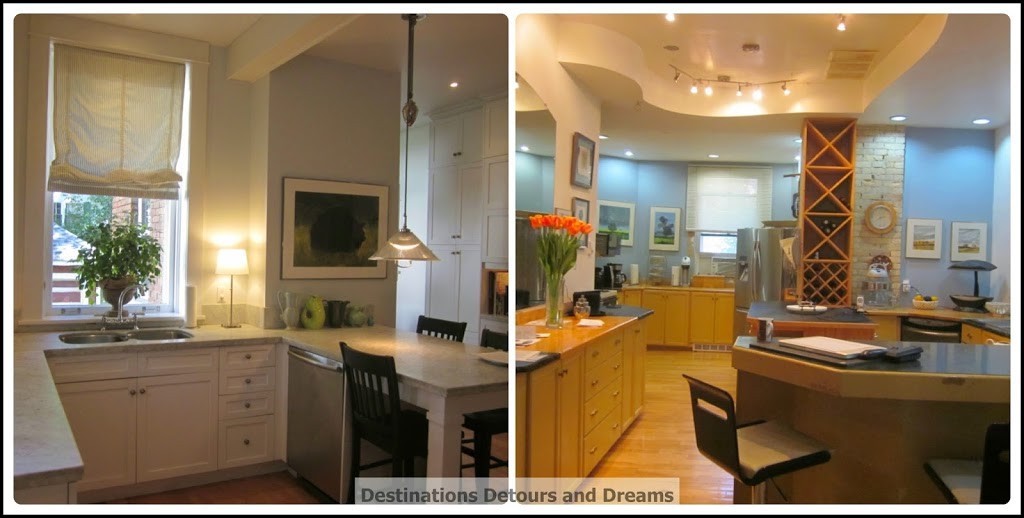 Even when restorations in other parts of the house were done to be true to the original, kitchens took on a modern feel.

In 1955, the Armstrong’s Point Association was formed to “preserve the residential nature” of the neighbourhood. The area remains peaceful, shaded with natural beauty. It is hard to believe the city is just steps away. Several gardens were also part of the Heritage Home Tour. Read about these garden refuges here. 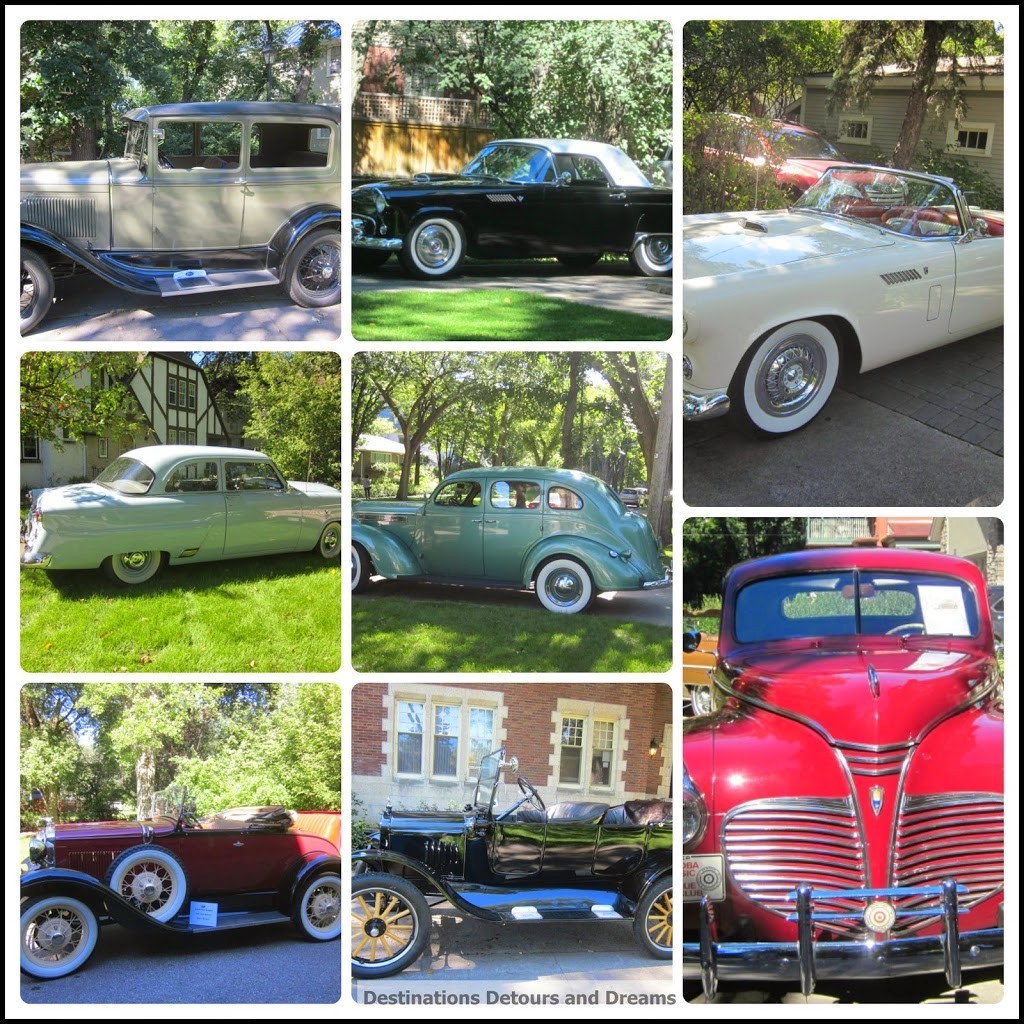 Some of you may have noticed the vintage cars in front of the homes. A Vintage Car Show was also part of the tour. Here is a sampling of the vehicles.

Do you have a favourite heritage home or home tour? 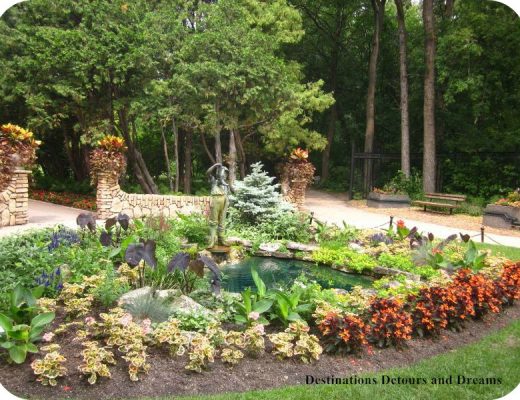