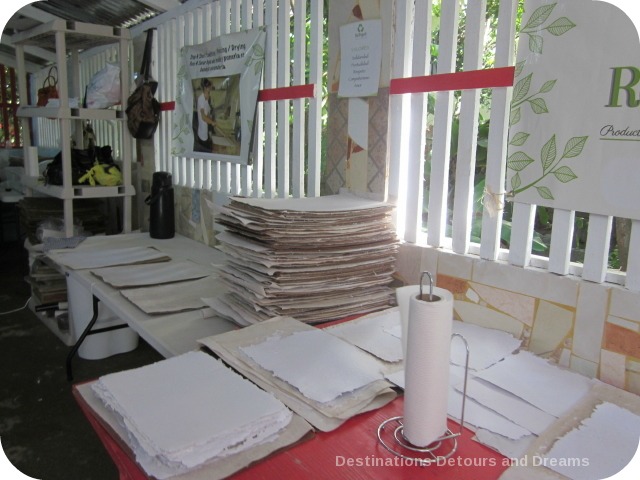 (Note: The Fathom travel brand, with whom we cruised to the Dominican Republic, no longer exists. This activity, however, is available as an onshore excursion with several cruise lines owned under the Carnival Corporation umbrella. A big thank you to the former Fathom Travel for providing this opportunity. Opinions and observations are my own.)

Our bus drove down the narrow streets of town and parked one block over from our destination. When we approached our destination on foot, the women at RePapel were waiting in front to greet us with song. 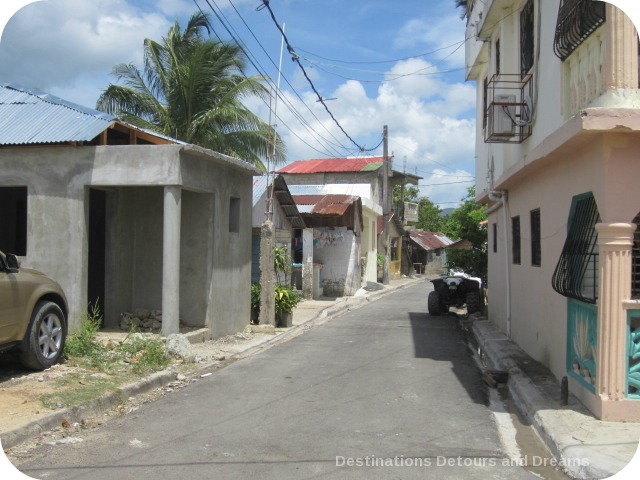 One of the streets in town

RePapel is a paper recycling association created by an enterprising group of women in the Dominican Republic in a small town on the outskirts of Puerto Plata. I came with a group of people on a Fathom cruise. During the three days we were docked at Amber Cove, we had opportunity to volunteer and work alongside locals on projects focused on improving environmental, educational and economic conditions.

The Dominican Republic is a beautiful country but it is also one of the poorest in the Caribbean. Unemployment is high. The recycling association provides employment for these women close to home. Most are sole supporters for their families and previously had to travel long distances for jobs. Fathom and its partner IDDI, an NGO which has been working in the Dominican Republic since 1986, provided a central workspace for these women. 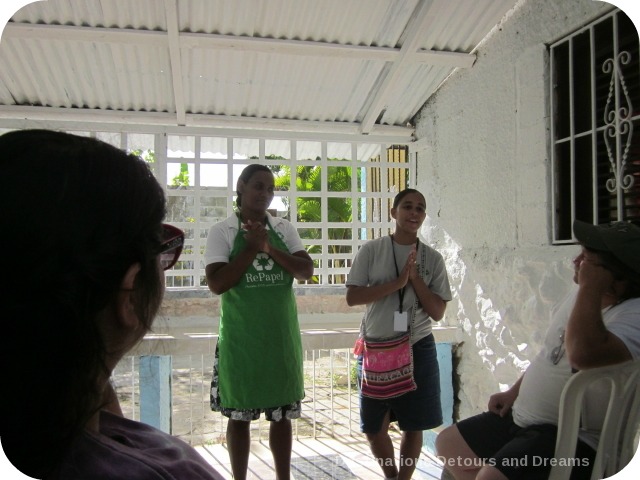 With the help of IDDI translators, the women introduced themselves. We then divided into two groups. One group worked on crafts with artisans sharing the space. The other group, the one I was in, went to work recycling paper. We divided into sub-groups and rotated through the work stations, spending approximately twenty to thirty minutes at each one. 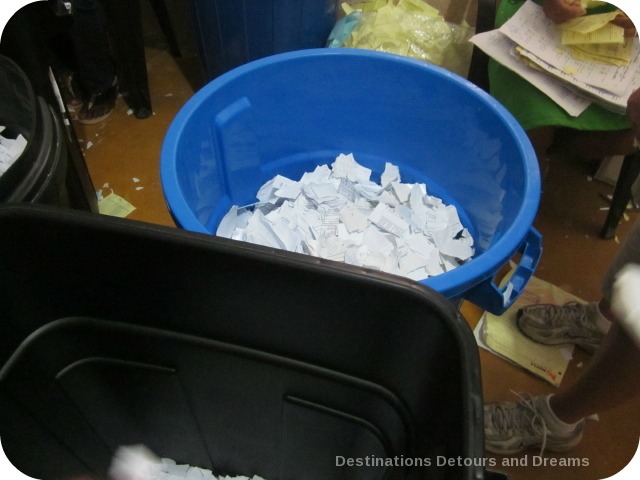 The first step was shredding paper, most of which were old invoices from a local business. We tore paper into bits and tossed the bits into bins, white paper bits with no printing in one bin, paper bits with printing and colour in another. They would each be used to make paper, pure white sheets and sheets with colours and marks showing up. I thought about how much easier this job would be with the electronic shredder in my office at home. But then again, maybe not. We carefully ripped each sheet to separate the pure white from the parts with printing. The shredder won’t make that distinction. 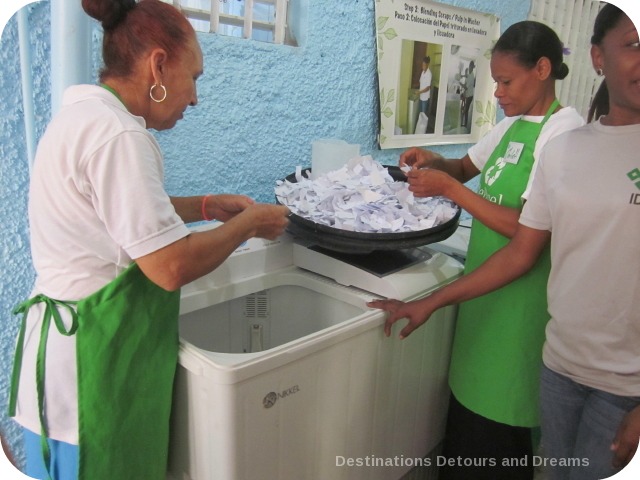 The paper bits are washed 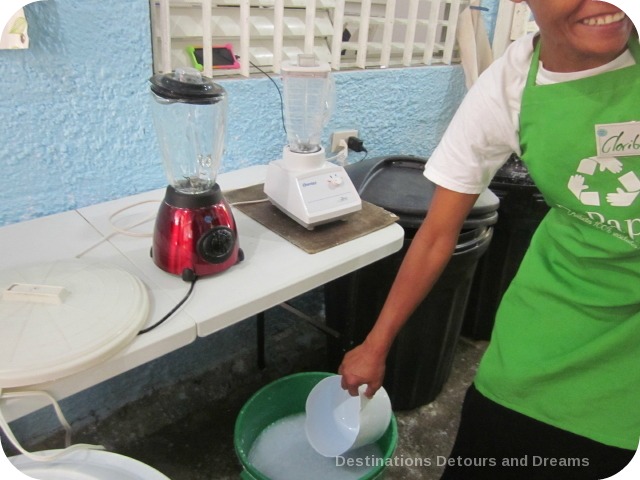 After the blender, the soupy mix is poured into troughs. We moved screens through the water in the troughs. When we lifted the screens and let the water drain off, paper pulp remained, covering the screen. We carefully pressed the contents of the screen onto sheets to dry in the sun.

Through a combination of sign language and the odd Spanish word, I asked the woman helping me at the trough if she had any children. She raised three fingers and said “hombre” (man). After I told her I had one Senorita, she called an IDDI guide over to translate. She wanted to tell me she also had ten grandsons. 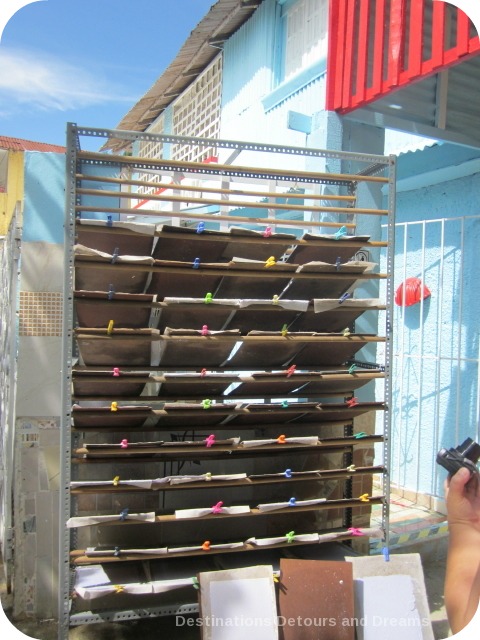 Paper sheets drying in the sun 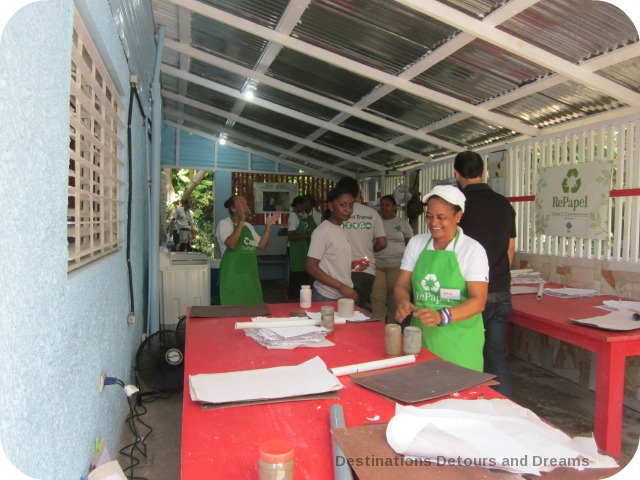 Once the paper has dried, rollers or jars of sand are used to smooth out the lines the screens left on the paper. I found this to be very hard work, requiring good hand strength and stamina. 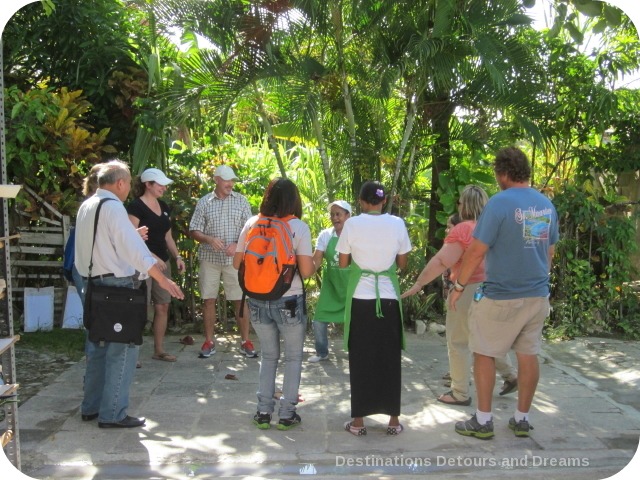 The women at RePapel were friendly, outgoing and cheerful. They broke into song several times. One of the songs was a recitation of the different stations involved in the paper making process. Partway through our work, as we moved between stations, a couple of Repapel women took us aside for a few moments to teach us to dance. 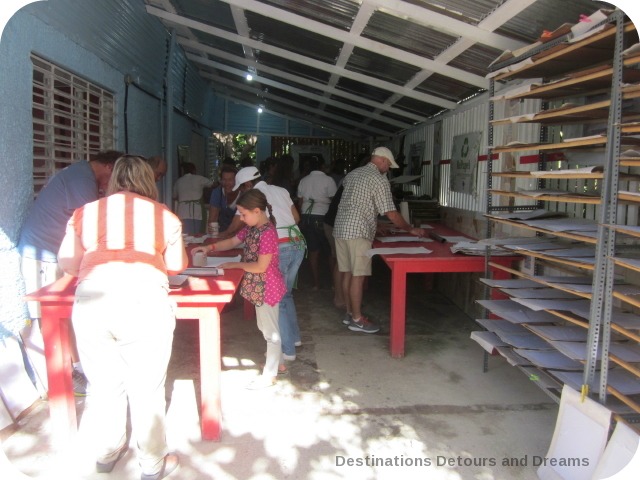 Midway through the morning, after we’d been through all the stations, both groups took a combined break. We had water, a banana or apple or cookie. Next door, a little boy looked out the window and made noises to attract our attention. Two teenage girls in the group asked permission and then took over apples for the boy and his sibling. The boy kept pointing at the younger girl’s mouth and saying “chains” in Spanish. He may have never seen braces before. 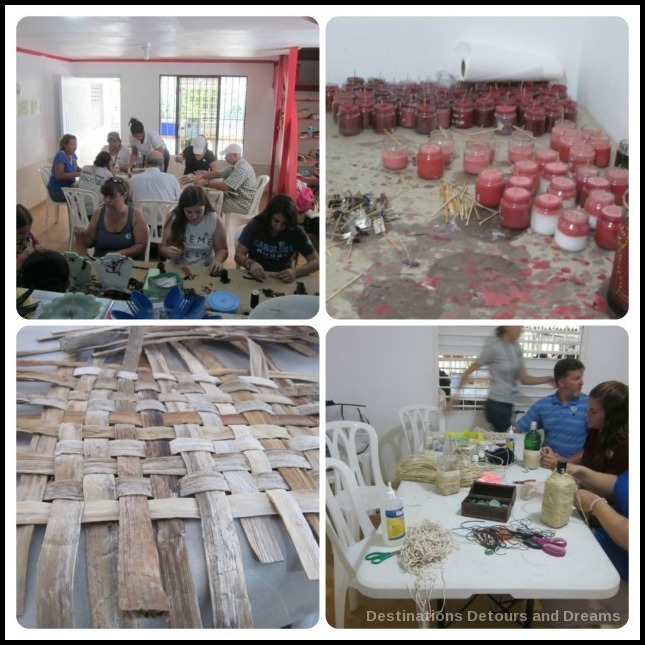 Working on crafts at RePapel

After the break, the groups switched jobs. Now I was working on crafts with the artisans. The four women working on crafts here are not part of the RePapel recycling group, but have received space to work at the centre. I threaded coffee beans onto a necklace, wove banana leaves, made candles and glued string onto bottles as the start of a decorative process. 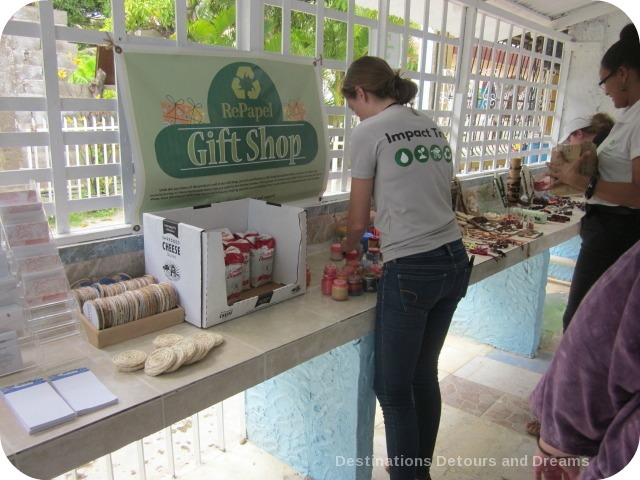 At the end of our work time, we had opportunity to buy recycled paper products and the artisan’s crafts

The paper sheets made at RePapel go to a factory in Santa Domingo which makes journals, envelopes, notepads and cards with them. Some of those products were available for us to purchase.

When our time was up, the RePapel women sang and danced goodbye to us. The little boy next door followed us almost all the way to the bus, a shy smile on his face the entire time. 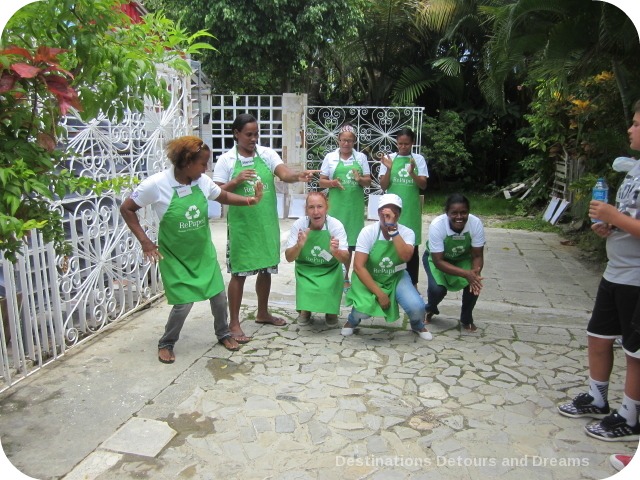 Women at RePapel singing a farewell to us 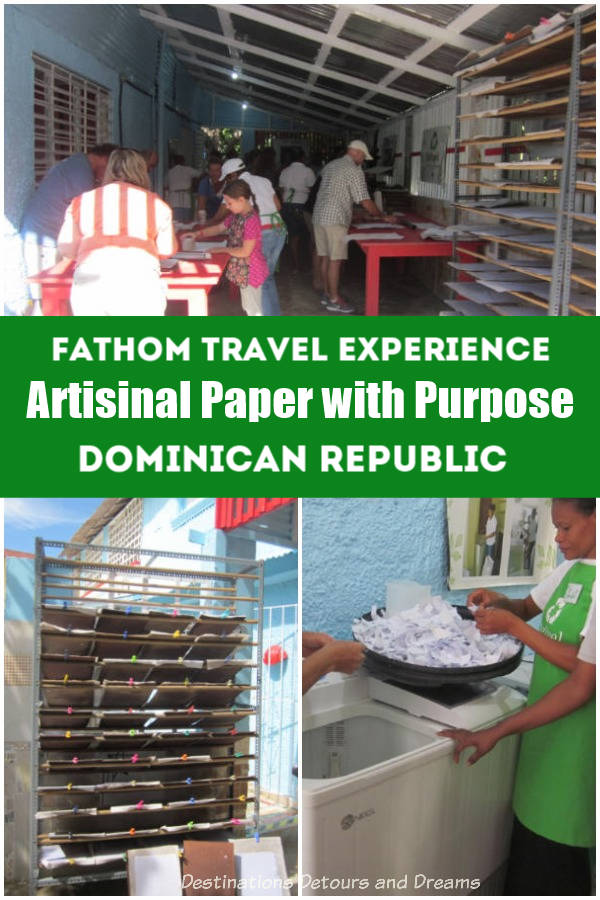