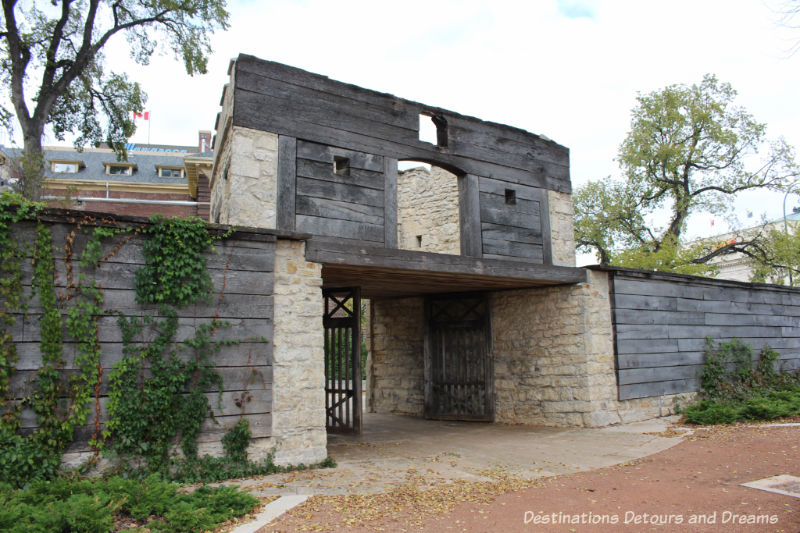 through technology, art, gardens, and an old gate

How do you create a heritage site/museum when all that remains is an old gate? At Upper Fort Garry Provincial Park in Winnipeg, Manitoba, a combination of park landscaping, sculpture, sound, light, and modern technology showcase the significant history of what was once a trading post and the gateway to the West. 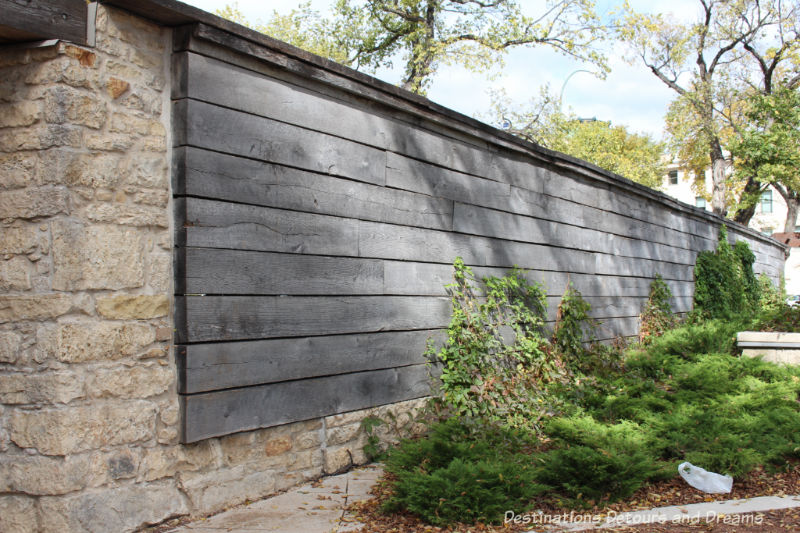 A wooden wall protected the northern half of the Fort after its expansion in the early 1850s. This replica was built in the 1980s.

Upper Fort Garry was the administrative centre of Rupertsland, a large expanse of land to which the Hudson’s Bay Company had been given exclusive rights to trade and colonize by a 1670 royal charter. In 1869, Rupertsland was transferred to the Canadian government. As Canada prepared to send surveyors to the area, the Métis people feared losing their land and rights. Under the leadership of 25-year-old Louis Riel, they seized control of Upper Fort Garry and created a provisional government. It was inside the Fort’s walls, during the winter of 1869 – 1870, that they presented Canada with a Bill of Rights that led to the Manitoba Act. Manitoba became the fifth province of Canada.

No longer in use, the Fort was gradually demolished between 1881 and 1888. Only the Governor’s Gate survived. In 1897, the Gate and the small parcel of land around it were given to the city as a public park. Over the years, the land around the gate has been used as a bus depot, soccer field, and gas station. In 2009, the non-profit group The Friends of Upper Fort Garry took over ownership of the land and buildings to transform it into a heritage park and interpretative centre. Upper Fort Garry was declared a provincial park in 2014. 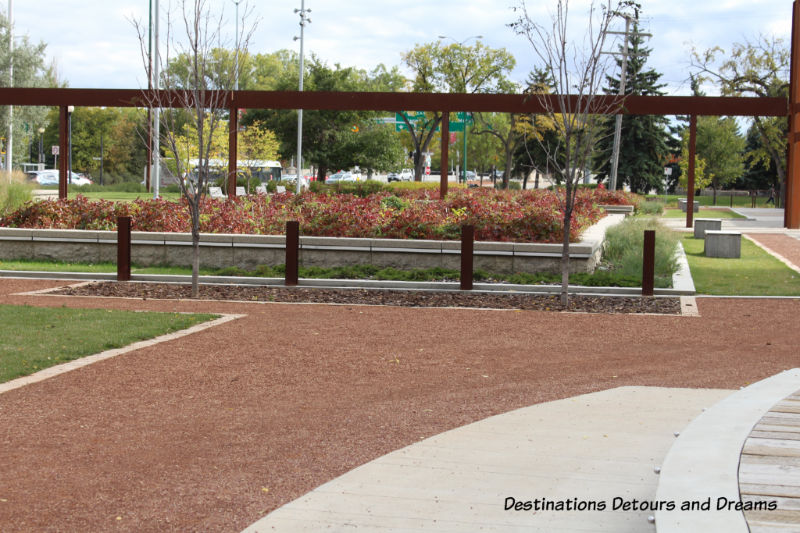 Although the gate is all that remains of the old Fort, today’s visitors can still get a sense of the Fort’s layout. Building locations are demarcated by raised limestone walls and garden beds. 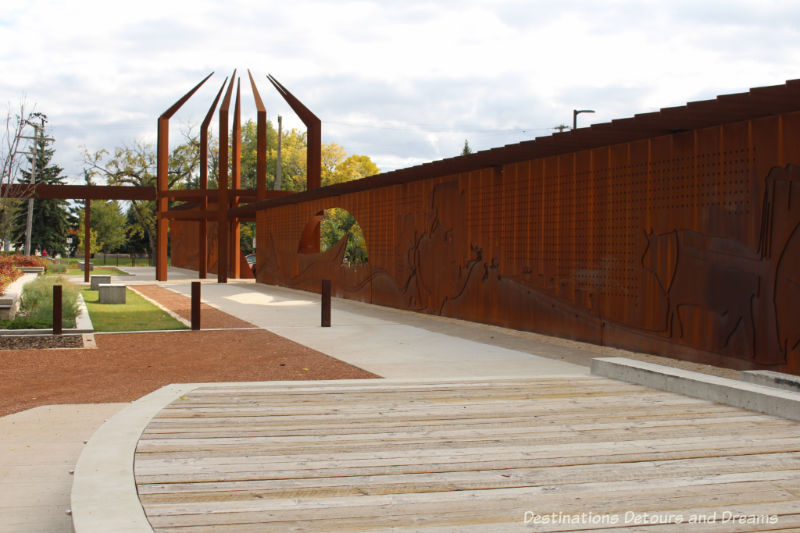 Perhaps the most spectacular feature of the Park is the Heritage Wall which marks the height, depth and location of Upper Fort Garry’s west wall. Made of three layers of weathering steel, it is 400 feet long and up to 13 feet high. Layers and symbols on the wall trace the history of Western Canada and Upper Fort Garry. 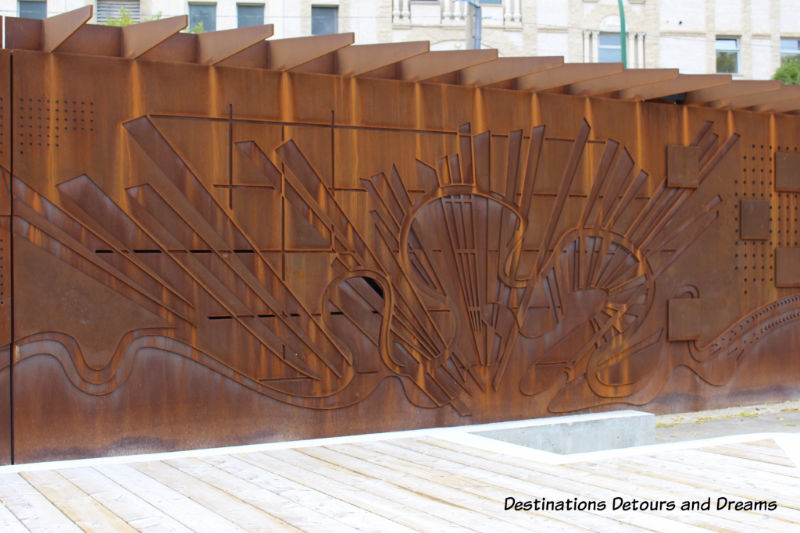 Viewing from left to right, the imagery begins with First Nations, Métis, and the fur trade. It then portrays European settlers and the events surrounding the Red River Settlement entry into Canada. Finally, it depicts the remaking of the prairies, the building of Winnipeg, and the development of northern Manitoba. A sign post at the north end of the wall provides a guide to the events depicted on the wall. 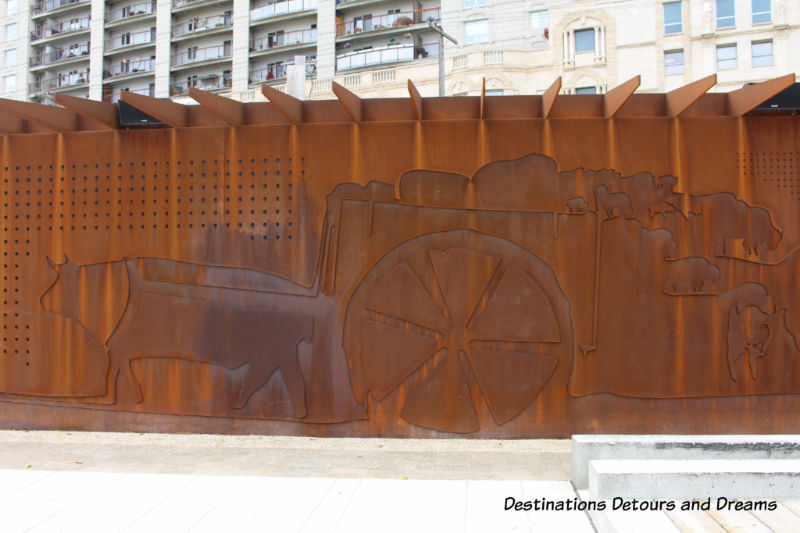 Red River Cart (actual size). The cart was developed around 1800, had huge dished wheels, and was built of local materials such as wood and animal hides. 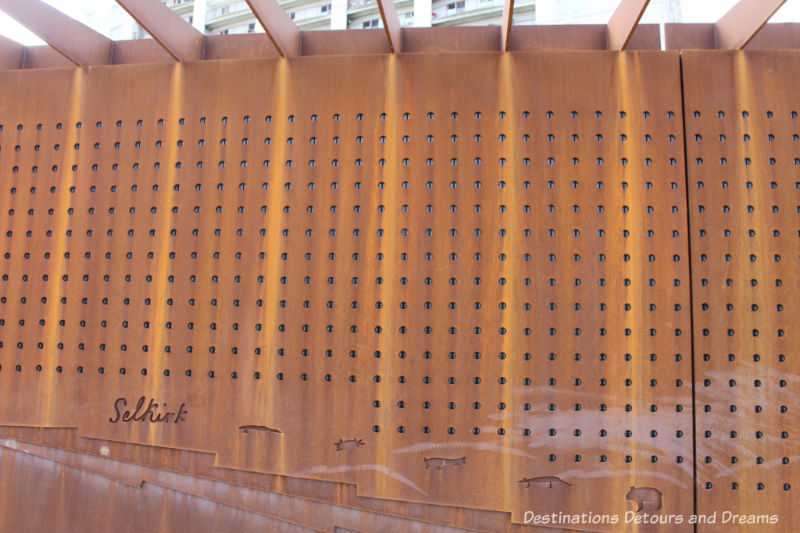 Housed inside the Heritage Wall are over seven thousand LED lights. They provide a coarse screen for animation and video. A Sound and Light Show plays every fifteen minutes daily from 10 am to 8 pm and from 11 am to 8 pm on weekends.

Flashing lights and the sound of a train along the tracks made me feel as I was watching a train rush by. Another section of the show simulated a stampede of bison. The final part of the show was accompanied by French-Canadian fiddle music.

Entrance to Upper Fort Garry Provincial Park is free. The Park is located in downtown Winnipeg at the corner of Broadway and Main, across from Union Station. On the other side of Union Station is The Forks, the junction of the Red and Assiniboine River that has been a meeting place for centuries and remains a meeting place today. 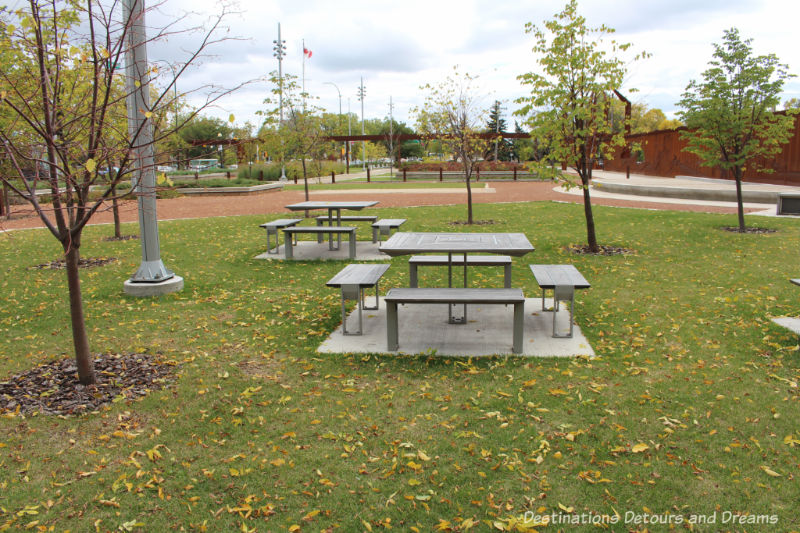 There is some signage in the park to explain the symbols and the historical events. For more guidance, a free mobile app from the Apple App Store or Google Play uses geo-location to pinpoint your location and locations of interest, and provides historical information. A printable downloadable guide is also available on the park website. 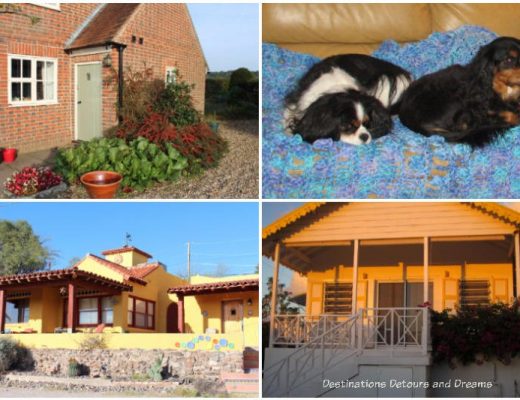