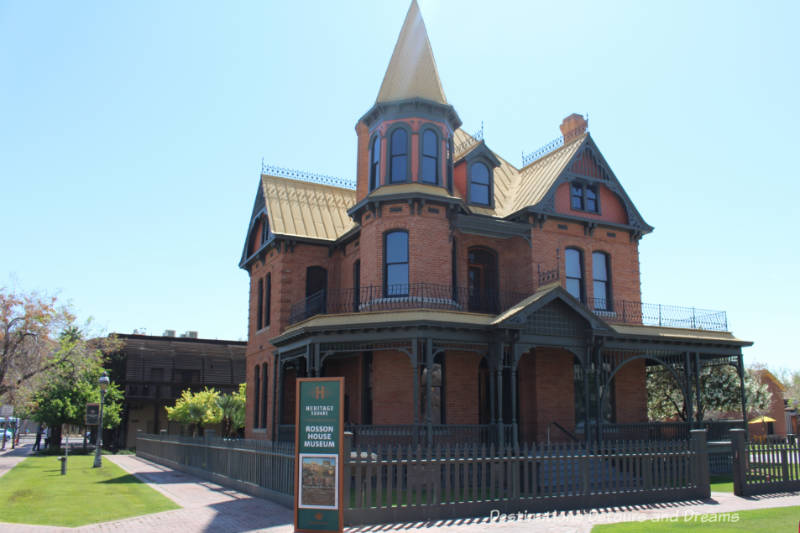 Rosson House Museum in Heritage Square takes you back to the late nineteenth and early twentieth centuries in Phoenix, Arizona

One block in the midst of modern, downtown Phoenix, Arizona reminds you of the city’s Victorian past. Heritage Square is the last remaining residential block of the original townsite. Buildings dating to the late 1800s now house museums, a coffee shop, restaurants and a wine bar. Standing majestically at one corner, Rosson House, a fully-restored 1895 Queen Anne Victorian house museum, is the highlight of the square. Guided tours give you a sense of what life was like in that time period. Docents provide information about the families who lived in the house. They also talk about the history of the Phoenix area in general, providing background to the life going on inside the house.

The house has been restored and decorated with period furniture to represent life as it might have been for the first families who lived in the house. I’ve toured other North American house museums of similar vintage built for well-do-families. Many design features and furnishings in the house were similar to those other homes. Still, I always enjoy these glimpses into the past. It was interesting to see variations peculiar to the Arizona setting. The stories about the people who lived in the house were fun to hear and I learned a bit more about Phoenix and Arizona history. 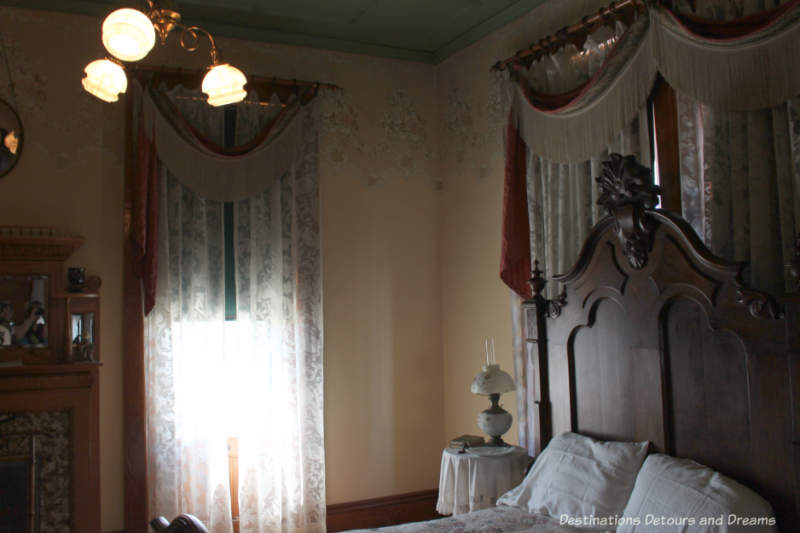 The house has a number of gib doors, doors made flush with the wall without dressings or moldings, in essence a disguised door. One of these was the window in the master bedroom which rolled upward to allow entry to the second level balcony. It was common for people in those days before air-conditioning to sleep outside on porches in the heat of summer. Our guide said they often covered themselves in wet sheets to cool off.

The history of the Phoenix area goes back hundreds of years. The Hohokam people lived here from as early as A.D. 400. They were a sophisticated society and built an extensive network of irrigation canals. They disappeared from the valley around A.D. 1450 for unknown reasons.

Phoenix’s modern history began in the latter half of the 19th century. An agricultural community had developed four miles east of the present city after Jack Swilling of Wickenburg organized a canal system to divert water from the Salt River to the area in 1868. It became known as Phoenix because the new town would arise from the ashes of an ancient civilization. The rapid influx of pioneers led to the decision to establish a townsite in 1870 on 320 acres of what is now downtown Phoenix. Phoenix was incorporated as a city in 1881. By the 1890s, Phoenix was bustling and it was in this decade that Dr. Rosson had the house built for his family. It still sits on its original foundation. 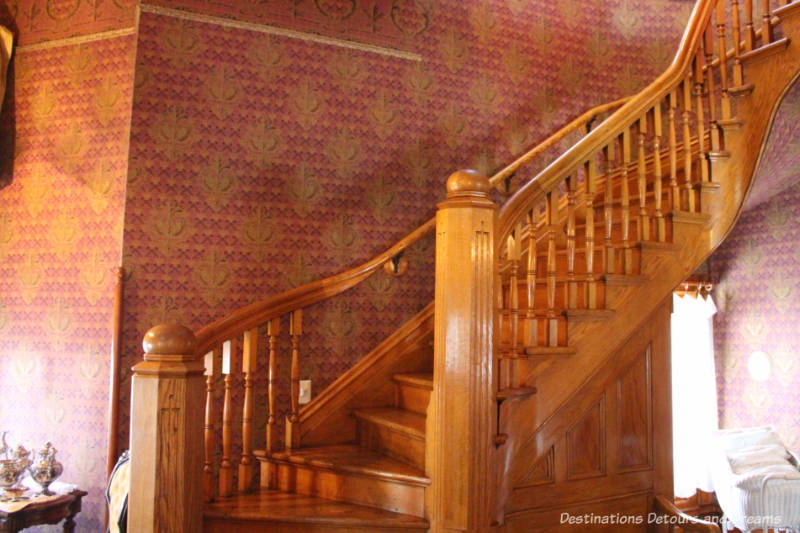 The front entryway was designed to impress. The wood of its wide staircase is original as are the wood parquet floors. The staircase at the back of the house is much narrower and steeper. 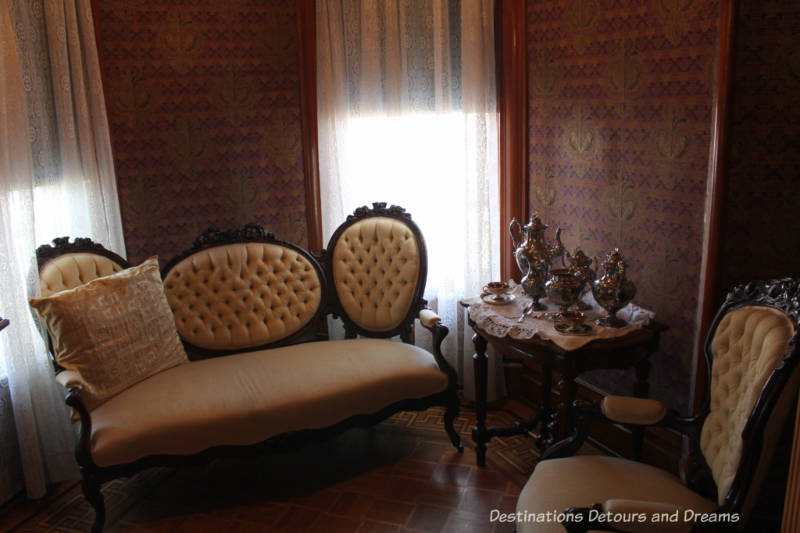 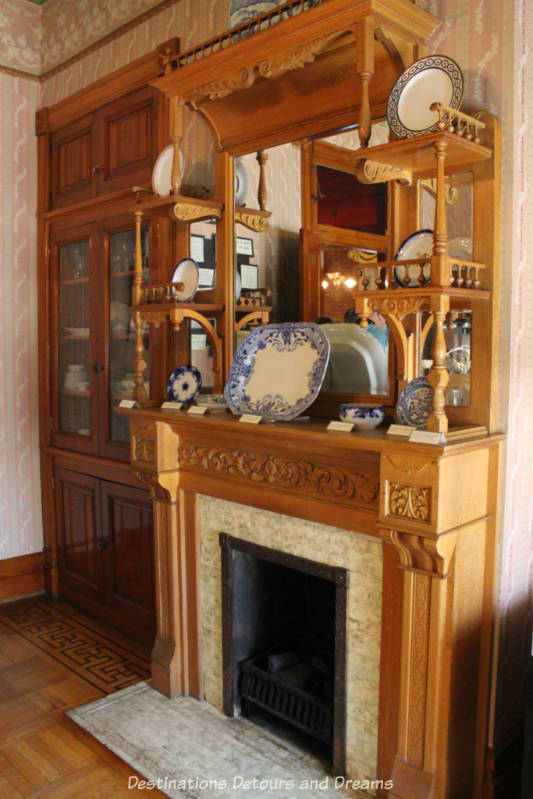 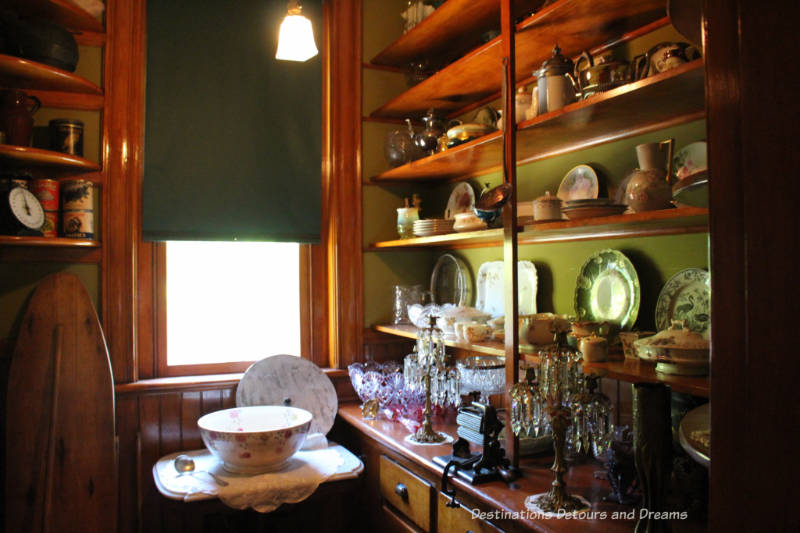 Separate pantry area to store china and other items to keep them clean, away from the dirt and smoke in the kitchen 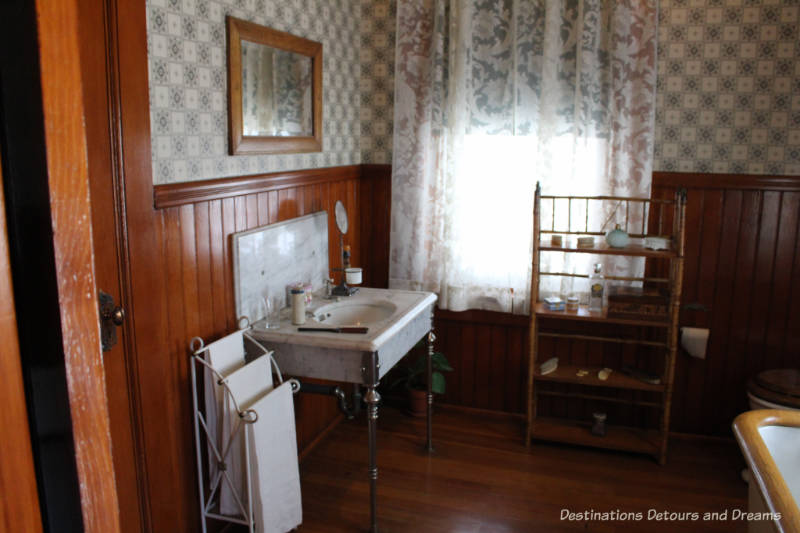 The 4,200 square foot house was one of the most expensive homes built in Phoenix at the time. It had all the modern conveniences, including hot and cold running water, an indoor upstairs bathroom, a telephone, and electrical wiring. Although lights operated on electricity, electricity service was not yet consistent and reliable. This chandelier had gas lamps as well as electric bulbs. 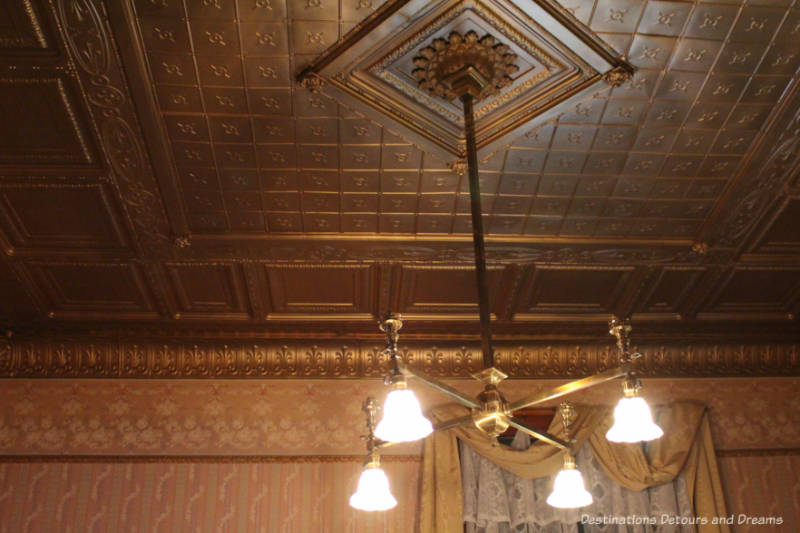 Chandelier in the parlour 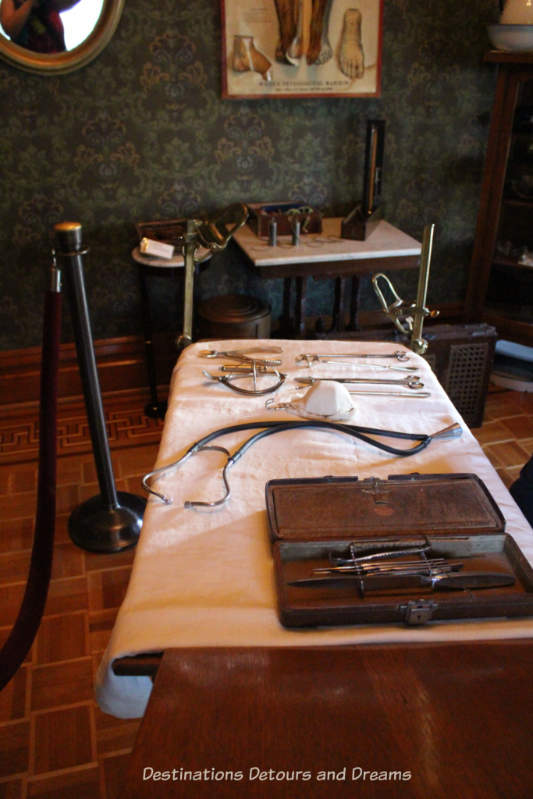 Dr. Rosson practiced from an office at the back of the house. He saw patients here. Another gib door allowed them to enter and exit out the back without going through the house. 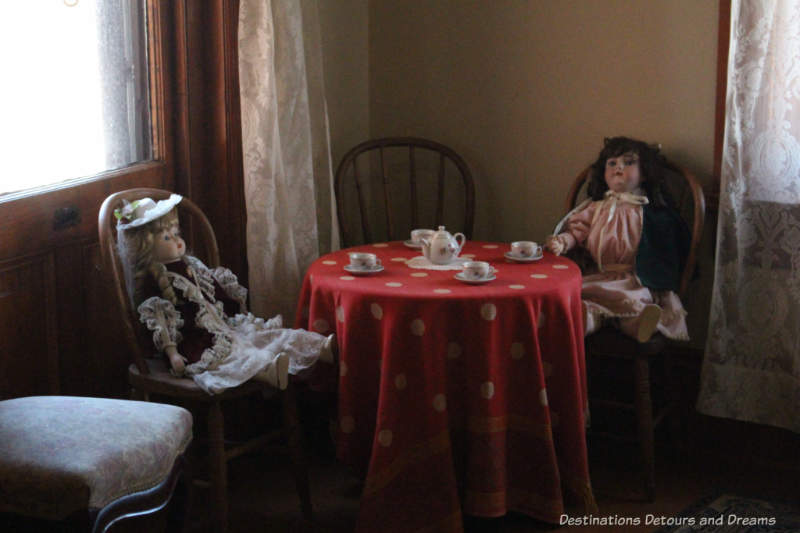 The story of the history of the ownership and occupancy of the house parallels that of the other Victorian-era house museums I’ve toured. In 1897, the Rossons sold the house and moved to California. The Goldbergs bought the house and lived there for five years. One of their two daughters, Hazel Goldberg, was the first bride married in the state of Arizona in 1912. One of the stories my guide told is that Hazel had her wedding party and guests lined up and waiting until they received word that statehood had been declared. The ring bearer at that wedding was Barry Goldwater, who later went on to become a U.S. Senator and was the Republican Party’s nominee in the 1964 Presidential race. 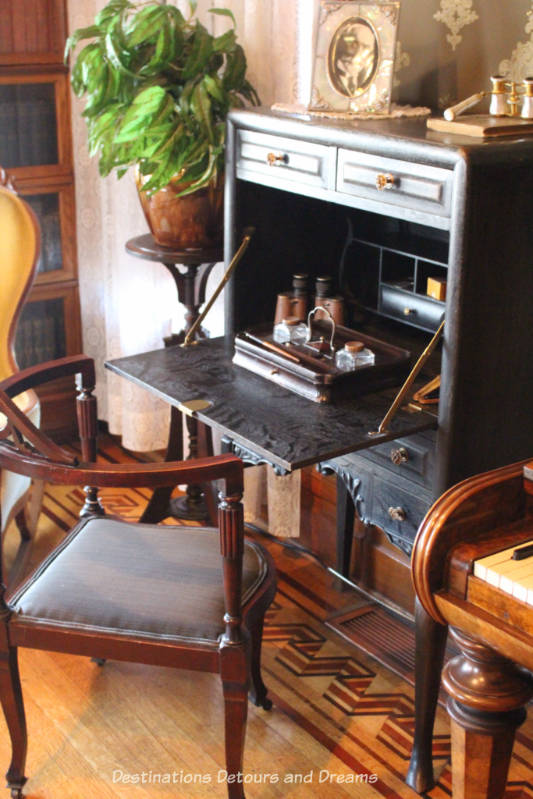 Stephen W. Higley, once part owner of the The Arizona Republic, and his family lived in the house from 1902 until 1914. In 1914 the house was sold to the Gammel family, who lived in the house until 1948. Gammel was a co-owner of a saloon. When prohibition became law in Arizona in 1915, his business suffered. Records list him as selling soft drinks and being an orange grower after prohibition, although our guide suggested he may have also been bootlegging liquor. The Gammel family subdivided the house, screened in porches, and ran it as a rooming/boarding house. A succession of businessmen owned it after the Gammels. By the 1970s the house had fallen into disrepair. The city bought it in 1974.

While I waited for my tour to begin, I stood in the covered entryway outside the Museum Shop building next door to the house and watched a slide presentation on a television screen mounted near the roof. The show highlighted the restoration efforts.

Non-conforming additions, such as the porch enclosures were removed. Initially the brick exterior, which had been painted over, was painted red to simulate the original colour. Later a method was found to remove paint safely. Paint chips from inside walls were microscopically analyzed to reproduce the original colours. Similar efforts were done with wallpaper. 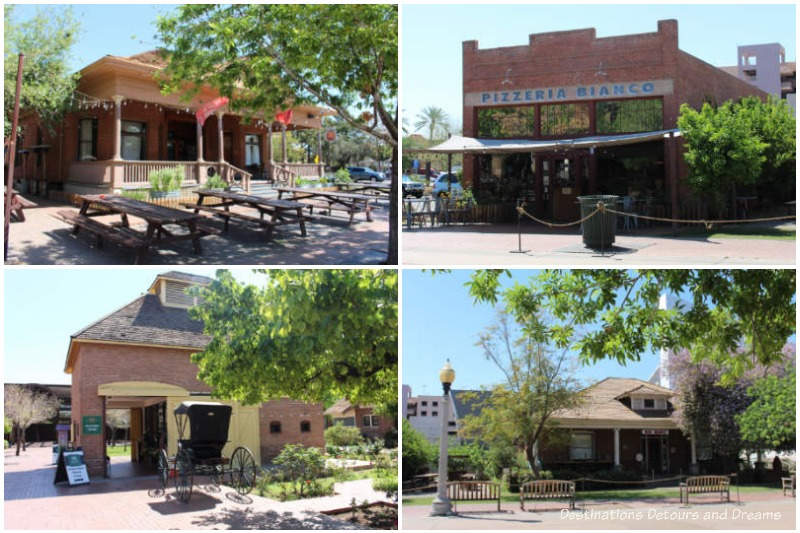 Today Heritage Square, with its pedestrian walkways, brick patios, and tidy landscaping feels lifetimes away from the Phoenix of the 1890s. The walkways connect you to the very modern Science museum next to Heritage Square. You might easily think it is all one complex and that the Heritage Square buildings are modern buildings deliberately designed in an “old” style. Until you go inside, like I did with the Stevens-Hausten bungalow, built in 1901 and now used as exhibit space. It was obvious many features dated to an earlier time. The wood floors creaked under my feet. 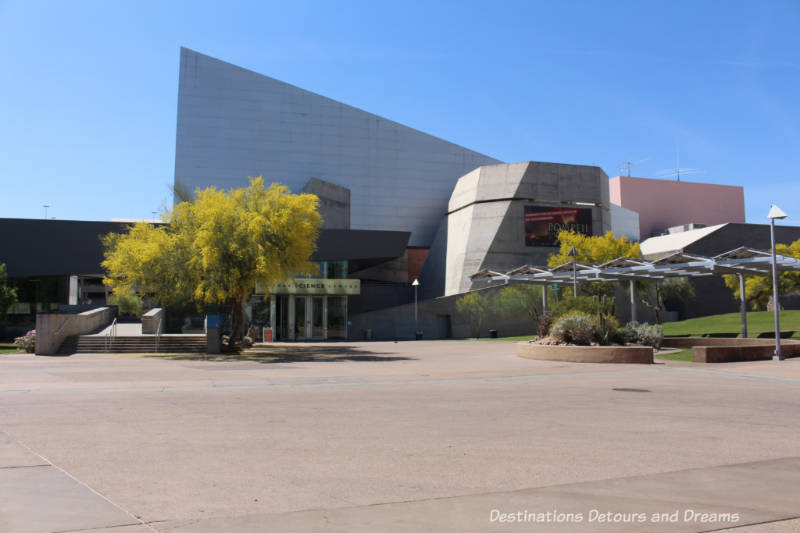 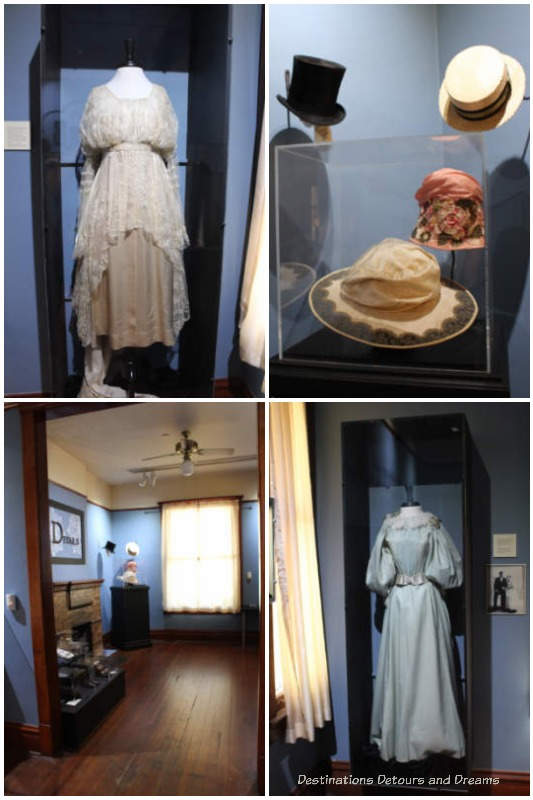 An exhibit of Victorian clothing inside the Stevens-Hausten Building

Heritage Square is Block 14 of the original Phoenix townsite, located on the northwest corner of 6th Street & Monroe in downtown Phoenix, Arizona. A public parking garage is located at 5th St. & Monroe. Entry into Rosson House Museum is only through guided tours. The museum is open Wednesdays through Saturday from 10 am to 4 pm and Sunday from noon to 4 pm. Tours start on the hour with the last tour starting at 3 pm. Keep your tour ticket to get a reduced parking fee at the garage.