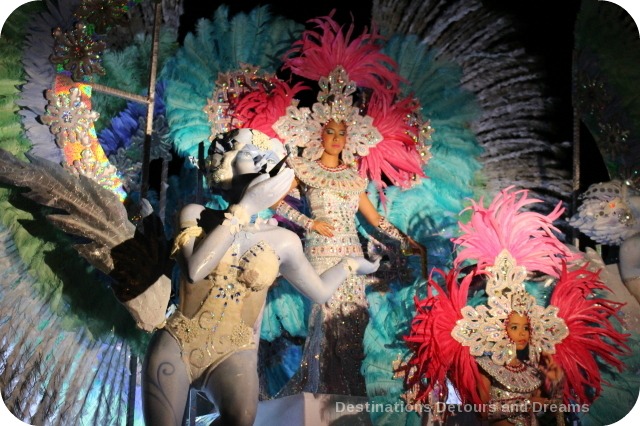 The last few days of our month-long stay in Pedasi, a small town on the southern tip of the Azuero Peninsula in rural Panama, coincided with its annual Carnaval. Carnival celebrations occur across the world in the days prior to the Christian solemn season of Lent. The nature of the celebrations vary. We’d never experienced carnival in any location and as we watched the preparations in the days leading up to Carnaval, we wondered what the four-day party in this normally laid-back town would bring. We discovered there were many parts to Carnaval. 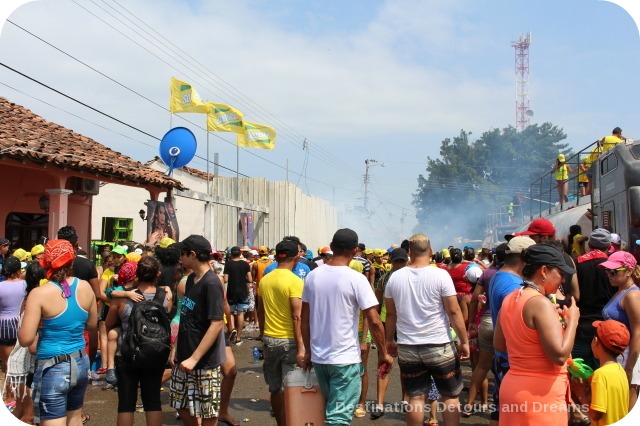 The town square was the centre of much of the activity. Crowds gathered in the afternoon, dwindled in late afternoon to early evening, and started to amass again around nine in the evening. Many brought coolers of refreshments with them. Some carried lawn chairs to watch the parade sitting down. The party lasted until the wee hours, 4:30 or so in the morning, although we didn’t last that long to witness it. We did watch fireworks from our back patio late one evening. On the last day, my husband watched the final fireworks at 6:30 am on Ash Wednesday. 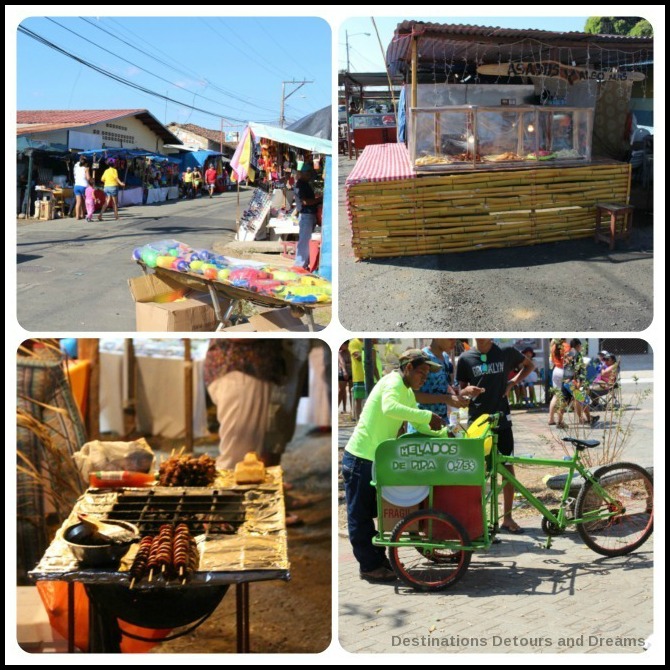 Craft and food vendors around the square 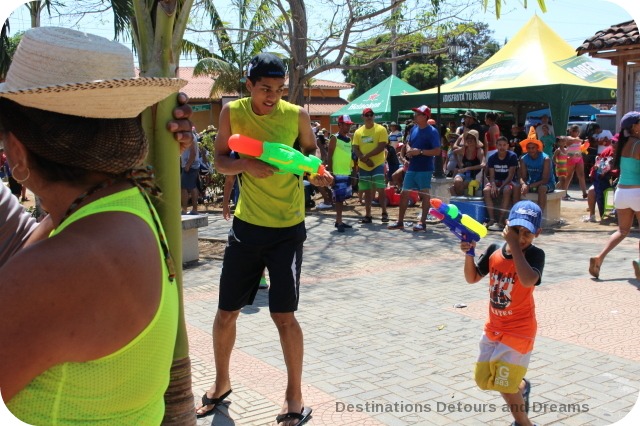 Water guns were a popular seller.
If you were in the square area, you were guaranteed to get a little wet. 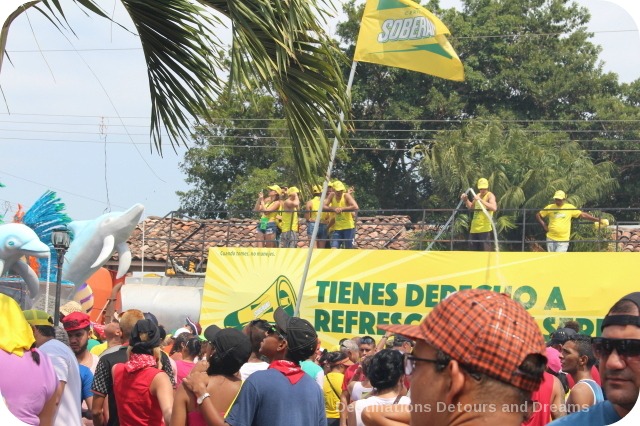 Culecos (tractor trailers with cisterns of water) spray crowd with water.
(Culecos hours were limited this year due to drought conditions.) 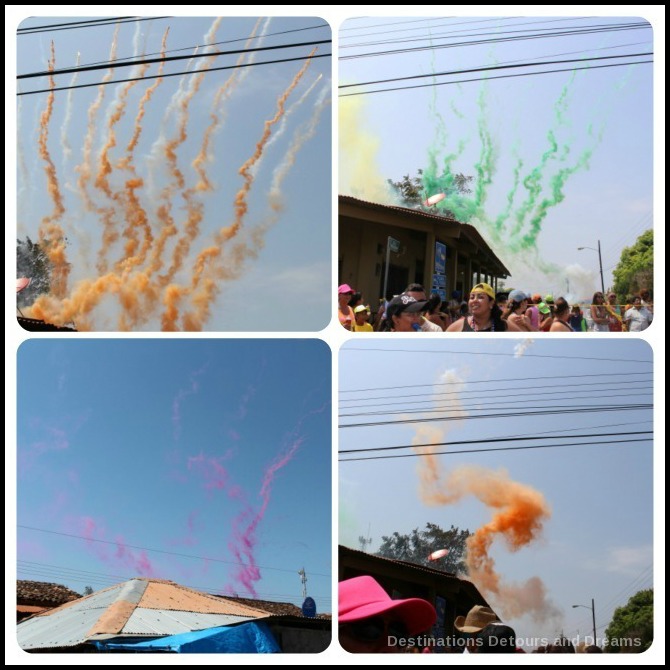 Coloured smoke fireworks going off during afternoon (usually during parade) 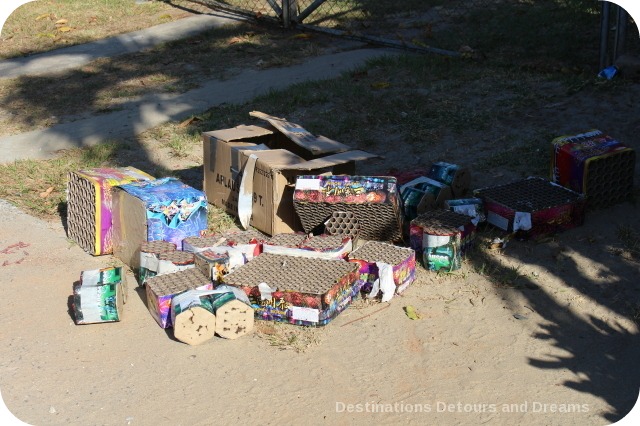 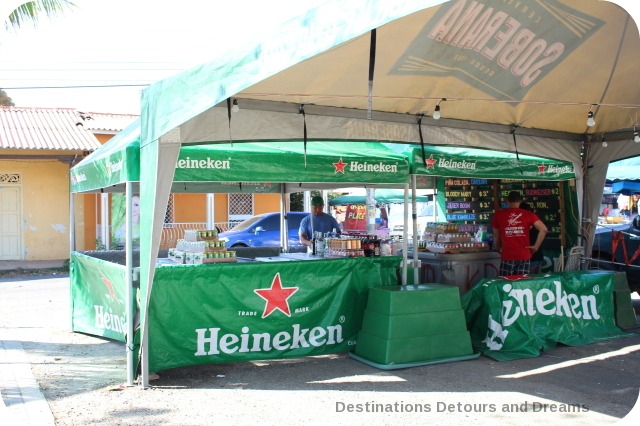 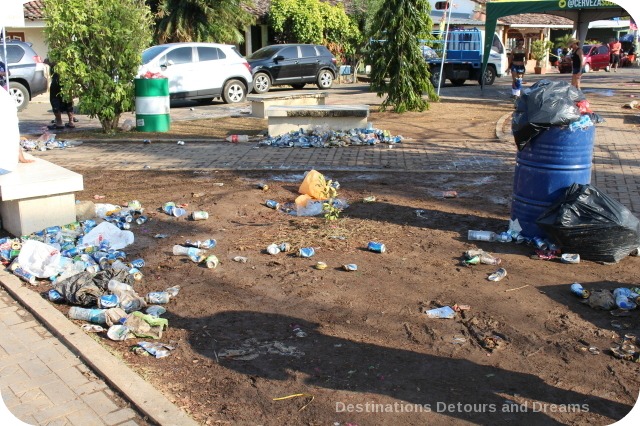 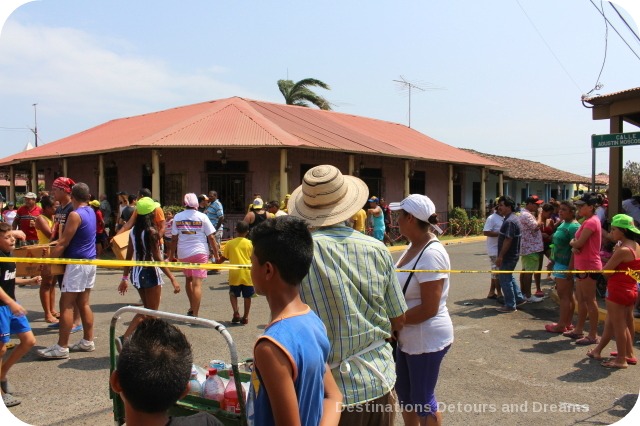 Two parades occurred each day. The first one was early in the afternoon (around 1:00 pm although we never did figure out the exact timing) and the second one at midnight. The parades focused on the rivalry between two queens from different parts of town. 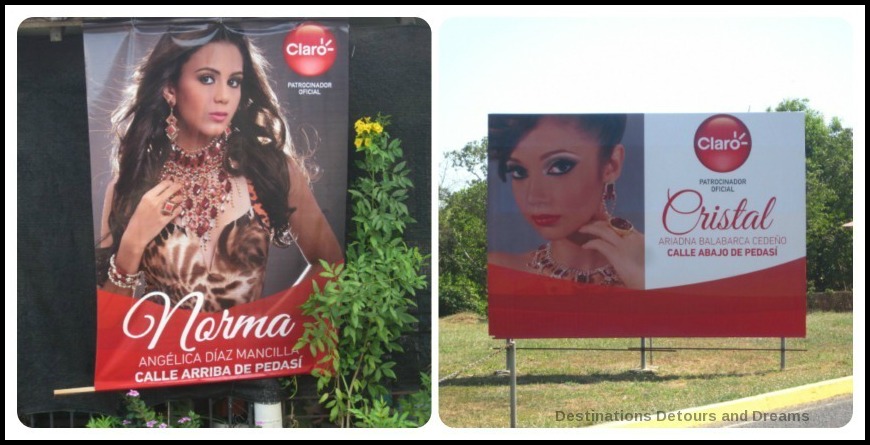 Calle Arriba (uptown) and Calle Abajo (downtown) compete against each other. Floats containing the queens of each area approached the centre of town from opposite ends of the main streets and then turned onto the streets leading to the town square. Each queen was accompanied by her “tuna”, a group of supporters which included a band in a truck following her float and people walking, dancing, and singing behind that. In the evening parade, an additional float joined the parade, a float of ladies or princesses preceding the float of the queen. The queens and other ladies swayed to the music and waved. In most cases, young men stood as hidden as possible behind the ladies, either holding them steady depending on how they were perched or keeping the wide plumes of their costumes outstretched. We were told that part of the tradition included the two groups yelling out derogatory remarks about the opposing queen. We never noticed that, but that may be because of our lack of Spanish. The floats paraded at least twice around the square, stopping in spots here and there. 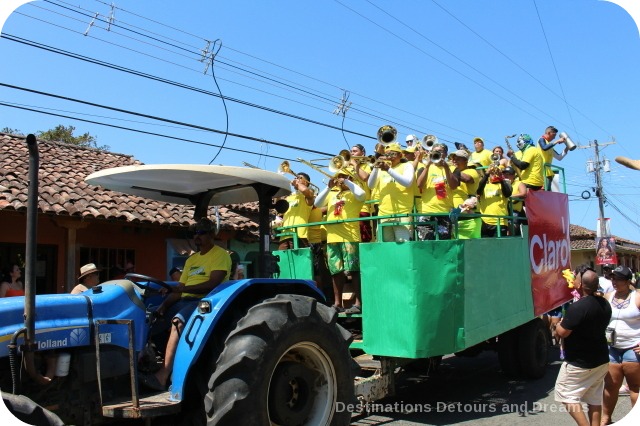 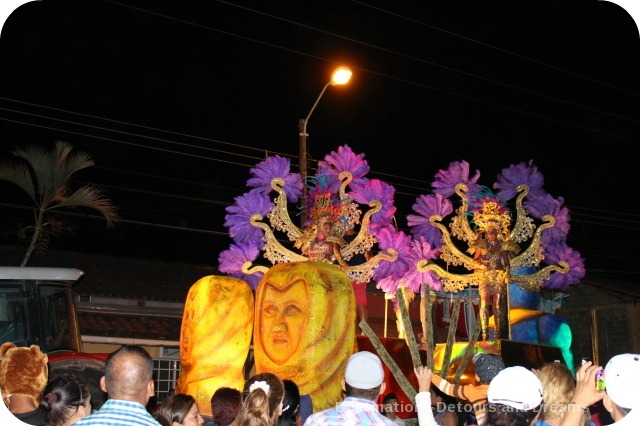 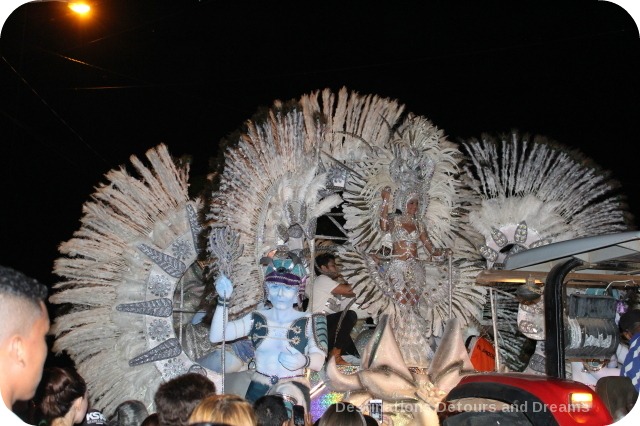 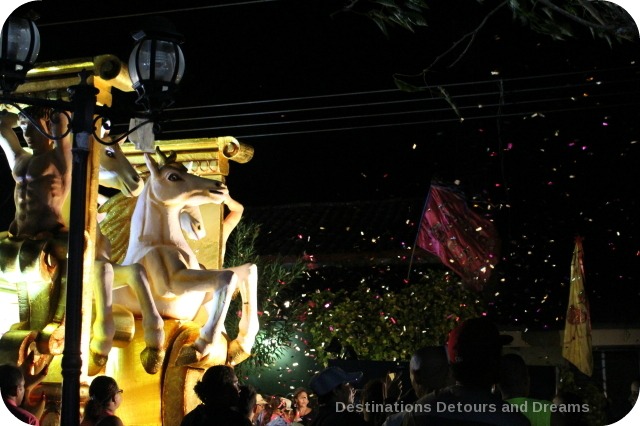 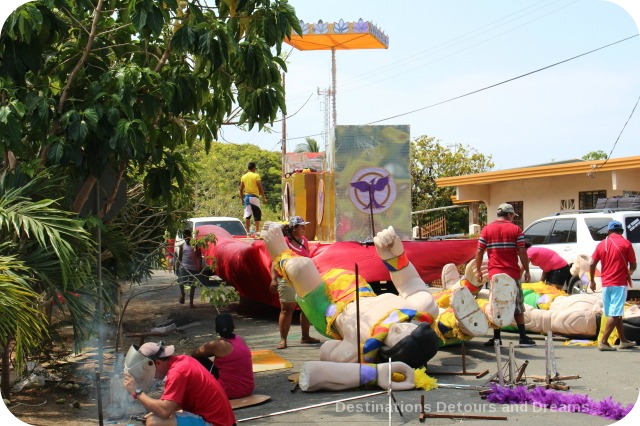 The float decorations and the dresses were different in each parade.
Almost as soon as one parade finished, work began preparing the float for the next one. 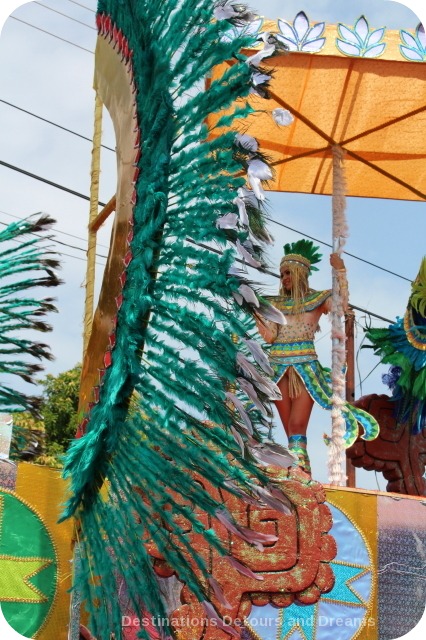 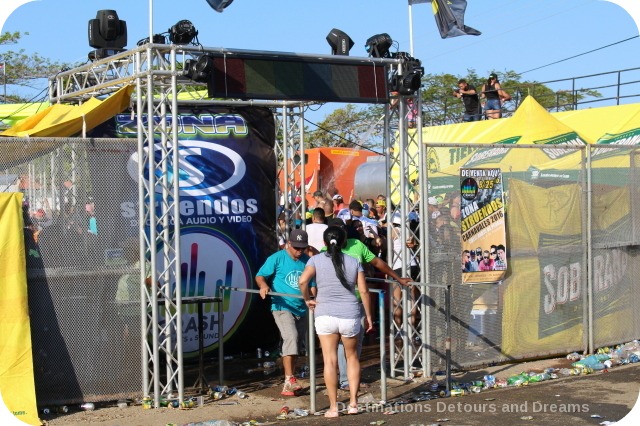 There was music everywhere. Bands accompanying the parades. Taped music in and around the square. Music blasting from homes. We saw a couple of cars with elaborate speaker systems set up in their trunks, playing music on streets in front of their or friends’ houses. Latin music except for the techno stuff from the cabarets. Two cabaret areas were set, which attracted mostly young people.

As we sat on our front porch in the afternoon, we’d hear music from the neighbours and from the cabaret the street over. We went to the square early the first evening (around 8:00 pm).  On our way there, we saw grandmothers dancing with teen-aged grandsons on their front patios. Around 9:00 pm a folk band in a truck began circling the square as it played. Two other groups of people marched around the square singing to the accompaniment of people on drums. The band and singers continued circling the square and performing for almost two hours. 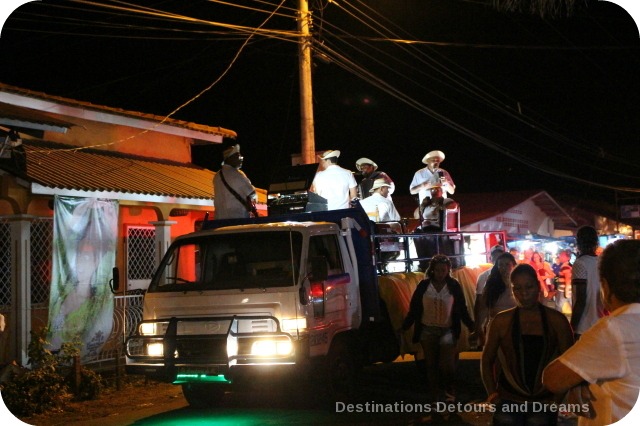 In the couple of days leading up to Carnaval, people began arriving in Pedasi. People continued to arrive the morning of the first day. Extended family arrived at our neighbours’ houses to stay through Carnaval. The neighbours on one side made use of the empty space between us and their house. Four or five cars were parked there throughout Carnaval, trunks full of clothing and supplies of the guests. Hammocks and additional seating were set up. A small empty space across the street from us became a parking lot. Patios on almost every house we walked by were full of people visiting, laughing, eating, drinking, and listening to music. Some houses had tents set up on their yards to accommodate visitors. If I had been a local, I think this might have been my favourite part of Carnaval. 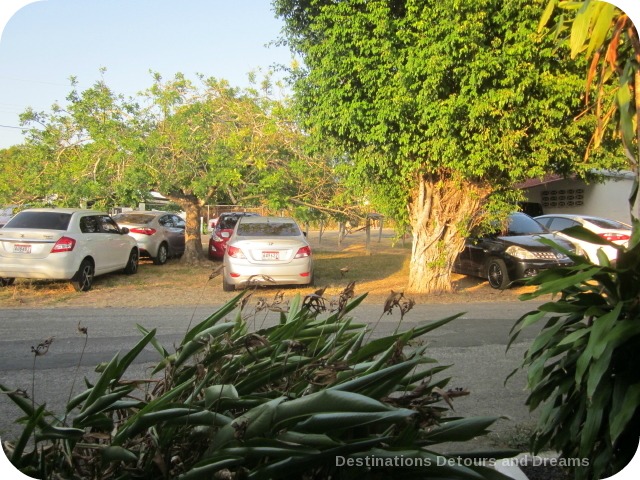 This normally empty space became a parking lot during Carnaval 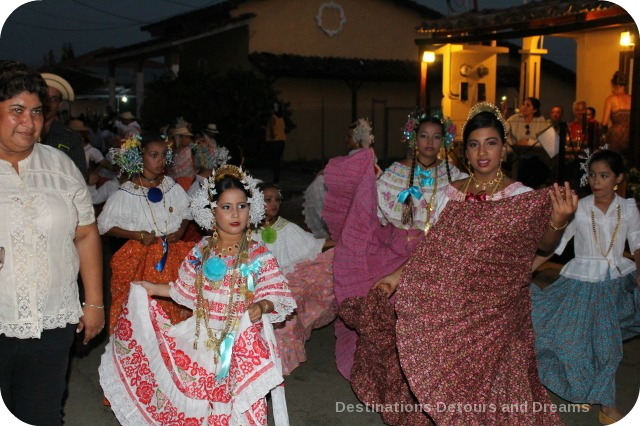 All that occurs throughout Carnaval is a tradition. One of my favourite parts of the festival focused on traditional dress. Shortly after 6:00 pm on the final evening, people in various forms of traditional dress, including beautiful and elaborately embroidered polleras, marched and danced around the square, accompanied, of course, by a band. We were leaving town early in the morning the day after Carnaval and therefore did not take in the late evening festivities of the last night. I was told afterward that the queens wore polleras for that. 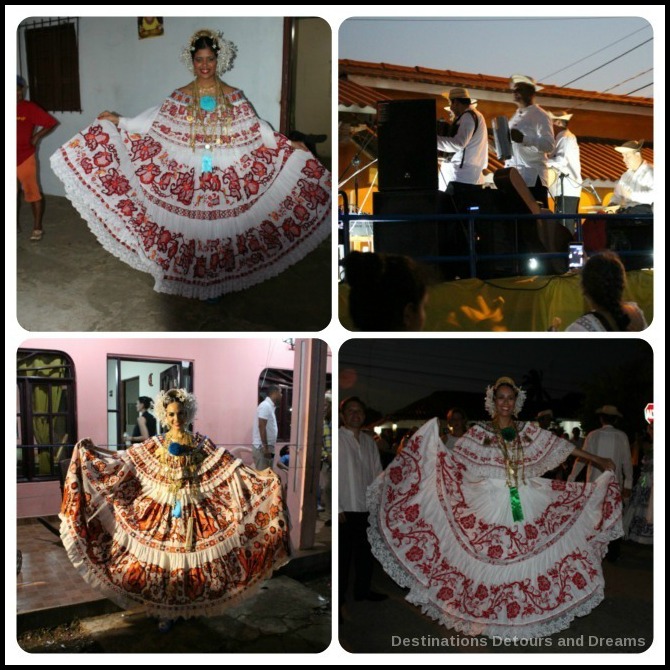 Carnaval was a fascinating festive feast for the senses. Prior to it starting, I worried we might find the noise and crowds too much. We heard music from the nearest cabaret and fireworks most of the night Friday before Carnaval. But after that evening, the cabaret nearest us operated only from about 3:30 pm to 6:30 pm and was quiet at night. Although people played loud music during the day and early evening, in the later evening and early hours of the morning they were at the square partying. We were far enough away from that to not be disturbed by the noise (except for occasional fireworks).

With over 4,000 people descending on a town of 2,000, I’d read the strain on power and water systems could cause outages. We did experience a six hour power outage one day. And, except for a few short bursts, we were mostly without water the last two days of Carnaval. We had extra drinking water and generally managed through that time, but it was inconvenient. I’d also been warned of the potential for theft. Fortunately, nothing like that happened to us. We were careful to keep electronics out of sight and locked up or with us. We were also thankful we had good neighbours. With the festive atmosphere, the visiting, and people on the streets more, we actually met a few more neighbours during Carnaval.

When we’d picked the timing for our Panama trip we hadn’t realized it bumped into Carnaval. We had the choice to leave before it started or stay a few more days and experience the celebrations. Not having experienced any kind of Latin Carnaval before, we decided to stay. Am I glad we made that choice? Absolutely. Would I attend Carnaval again? Probably not. I enjoyed seeing it once and it is a wonderful cultural tradition, but it is not my tradition. It is not my family gathering to celebrate. On the other hand, I’ve lived long enough to never say never.

Have you attended a Panamanian Carnaval or carnival celebrations elsewhere in the world? What did you think? 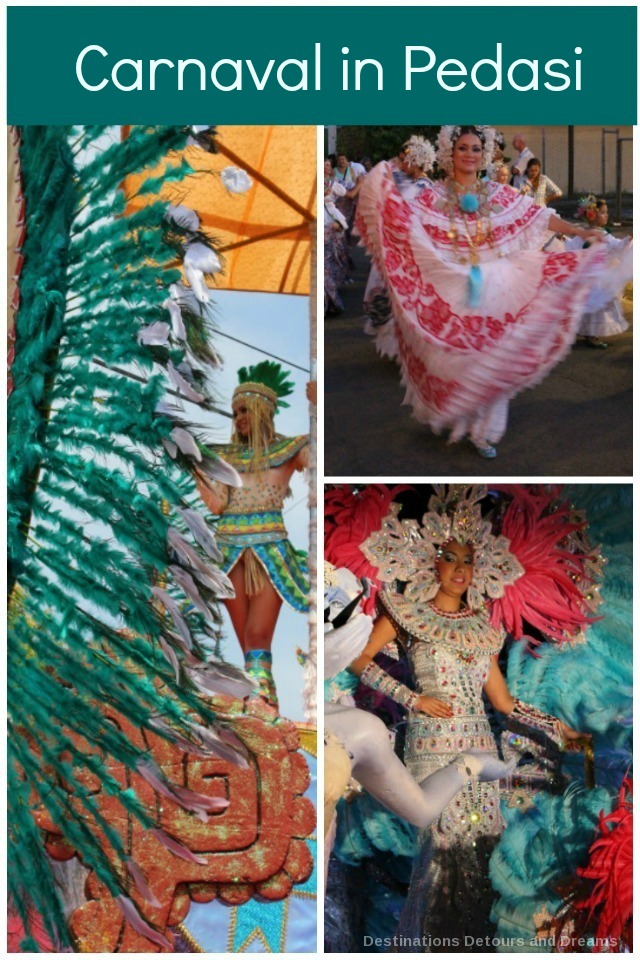 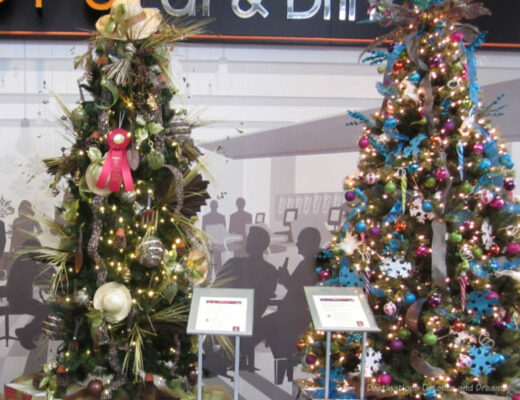