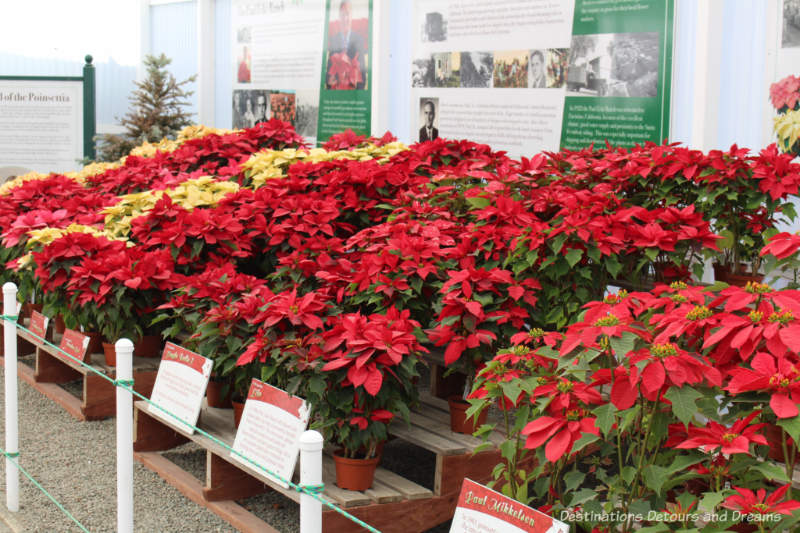 Learning about how the poinsettia became associated with Christmas at a spring display at Carlsbad Ranch, California

I associate the poinsettia plant with the Christmas season and was therefore surprised to see information about and a display of poinsettia plants during a spring visit to Carlsbad Ranch Flower Fields in North San Diego County, California. Carlsbad Ranch is known for its fields of ranunculus flowers ablaze with colour in the spring, but poinsettias are also part of its history. 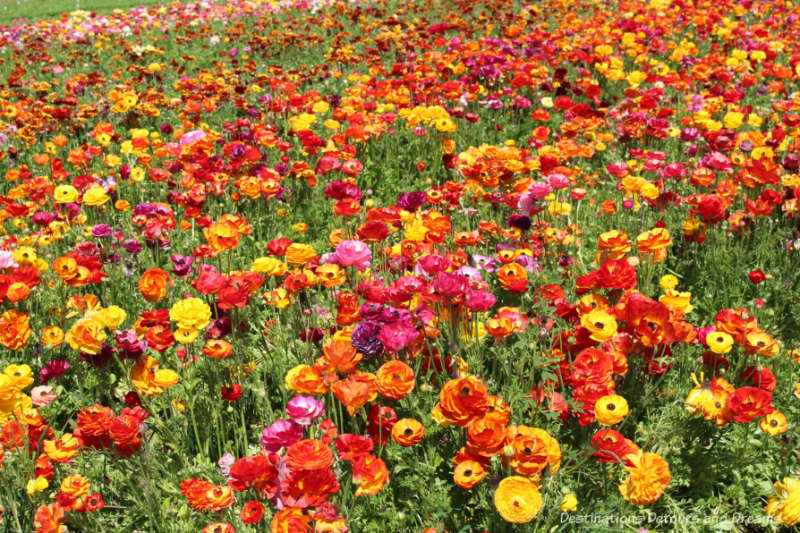 The fields where the ranunculus flowers now bloom was once used by the Ecke family to grow poinsettias. The Eckes played a significant part in bringing poinsettias into our modern day Christmas celebrations. 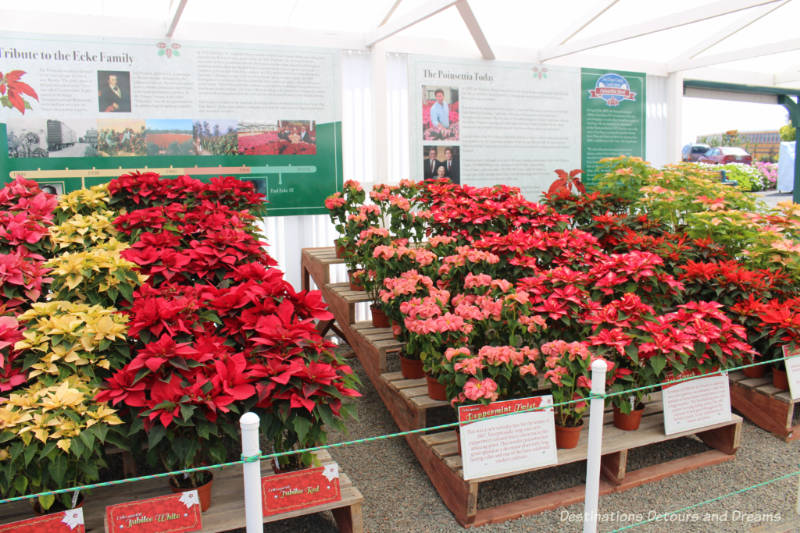 The poinsettia is native to an area in Mexico near to present day Taxco. It was first cultivated by the Aztecs, who called the plant “cuetlaxochitl.” They used the flowers to make a purple dye and the milky sap was made into a medicine to treat fevers. During the seventeenth century a group of Franciscan priests settled near Taxco and began using poinsettias in Christmas processions likely because of their brilliant red colour and their blooming season corresponding with the Christmas season.

In 1828, Joel Poinsett, the first U.S. Ambassador to Mexico, became enchanted with the plant and sent some home to South Carolina. The name “poinsettia,” given to the plant in his honour, is the name the plant is now known by in English-speaking countries.

Poinsettias were initially sold as cut flowers. One of those sellers in 1910 was Paul Ecke Sr., who set up flower stands on Hollywood’s Sunset Boulevard to sell cut poinsettia flowers from his nearby fields.  In 1920, Paul developed the first successful cut flower cultivars and began to produce large quantities of field-growing poinsettia mother plants and shipped them to commercial greenhouses across the country. In 1923, he moved the Ranch to Encinitas, California. 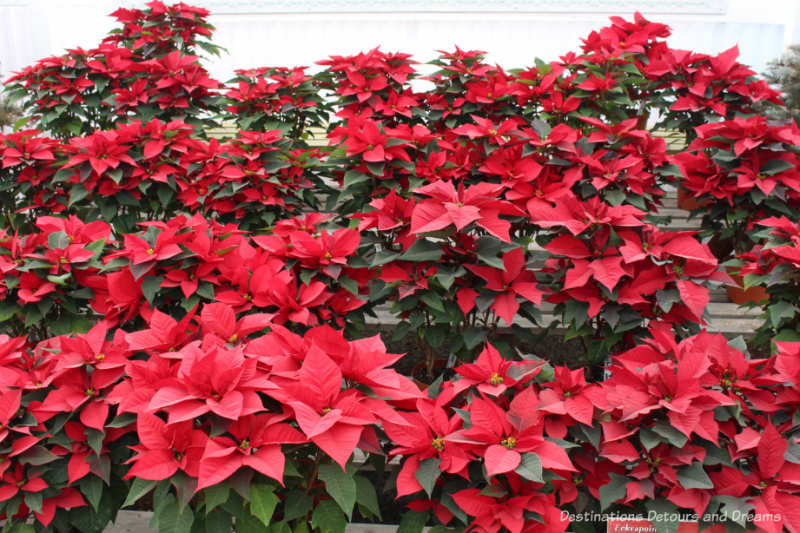 From 1923 until the early 1960s, the Ranch’s main production was producing field-grown poinsettia root stock that was harvested in spring and shipped across the country to greenhouse growers, who would use the plants as the source of holiday cuttings. In the 1960s, the Eckes moved their operation into greenhouses. 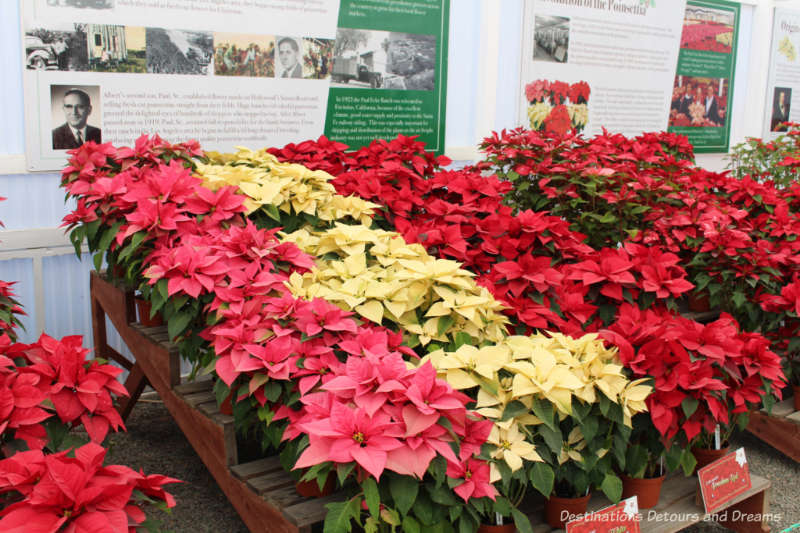 Research and development of new varieties, colours and forms was a major focus of the Paul Ecke Ranch. Signage at Carlsbad Ranch said that some of the varieties on display were no longer in production and could only be seen there. 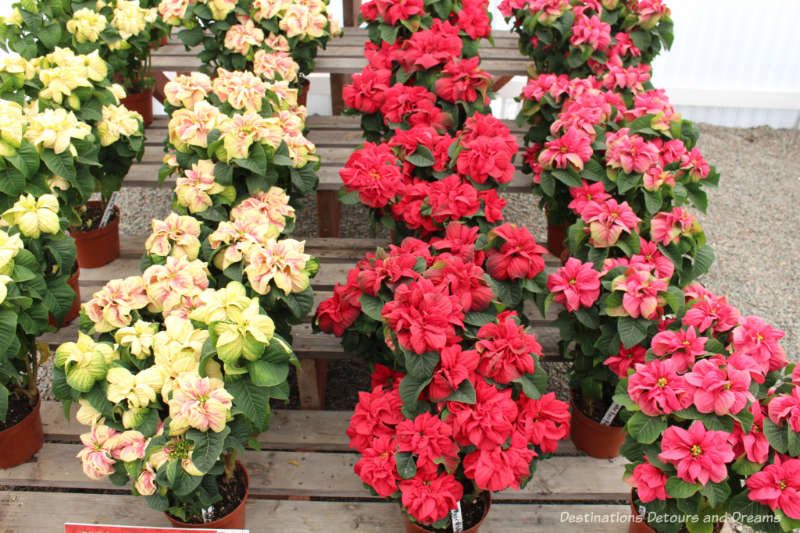 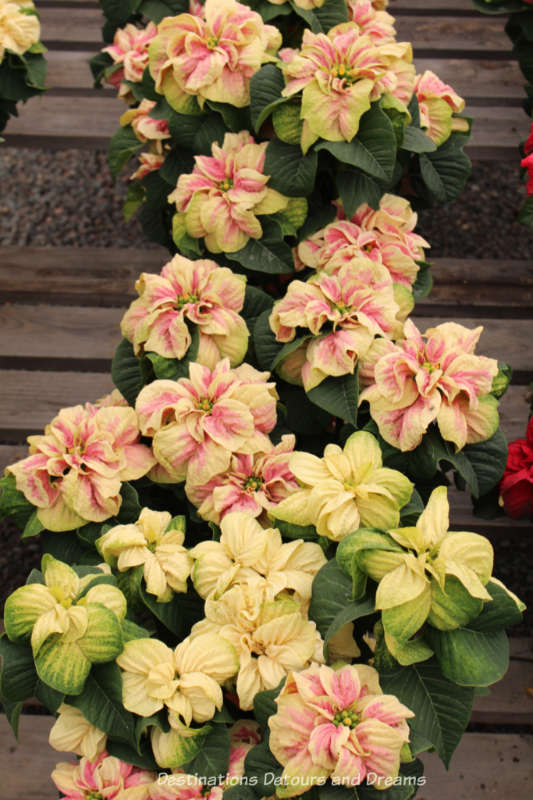 Early poinsettia plants were not well suited to the home environment. They were leggy, lost their leaves easily and faded quickly. In 1963 developments in poinsettia breeding yielded the first successful commercially-quality cultivars that grew well as potted plants. Now everyone could have a living poinsettia plant at Christmas. The Eckes began marketing these new potted plants around the country.

Another major shift occurred in the 1990s when shipments of unrooted cuttings were grown and transported from low cost, mild environment off-shore locations including Central America, Mexico and Africa. The unrooted form allowed for poinsettia cuttings to be exported across international borders where soil cannot be shipped due to environmental concerns.

Information at the Carlsbad Ranch display states that by 2005 most poinsettia cuttings in the United States originated from outside the country, although rooting and flowering is still conducted in the United States. I suspect the situation is the same in Canada, but I was unable to easily find any statistics. In my searching I did learn a bit about the difficulties growing poinsettias. They are highly susceptible to disease. Light, heat and CO2 levels need to be carefully regulated.

The Paul Ecke Ranch still produces poinsettias today, although it has not been owned by the Ecke family since 2012. The flower fields and displays at Carlsbad Ranch are only open to the public in the spring, but you can see displays of poinsettias among Christmas decorations throughout the world. 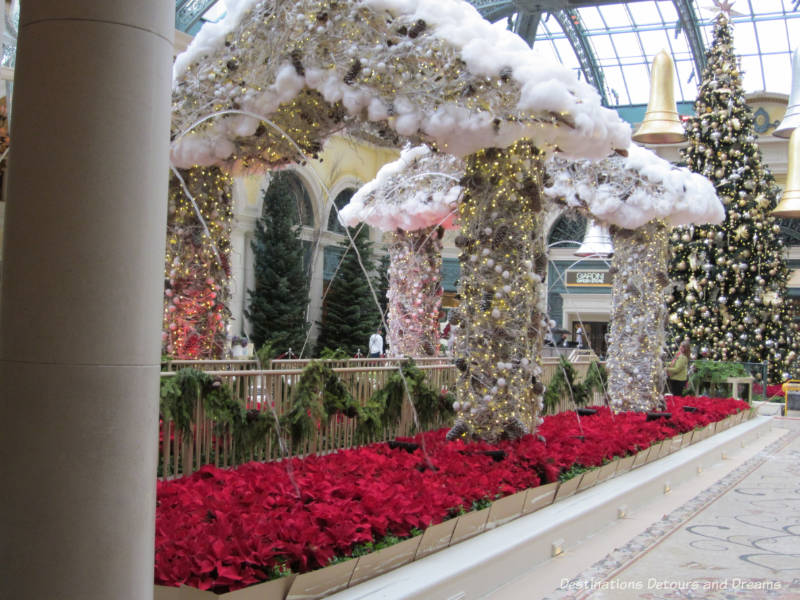 Poinsettias in a Christmas display at Bellagio Hotel in Las Vegas

I’ve always loved the festive look of poinsettias. Over the years I’ve owned plants that thrived well past the season. Occasionally I’ve been disappointed by a plant that didn’t fare so well. After my visit to Carlsbad Ranch and the research I did for this post, I now appreciate how special it is just to be able to have this plant in my home for the Christmas season. 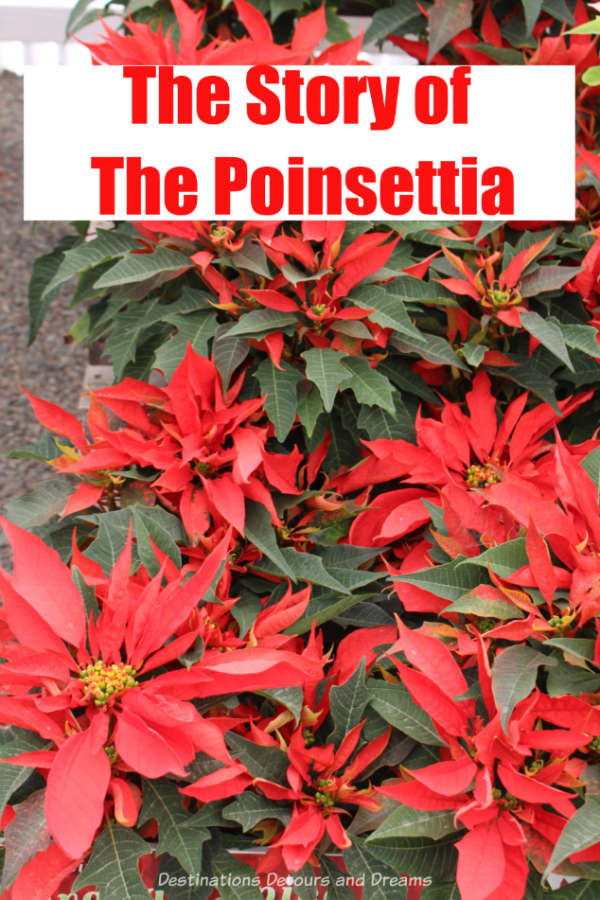 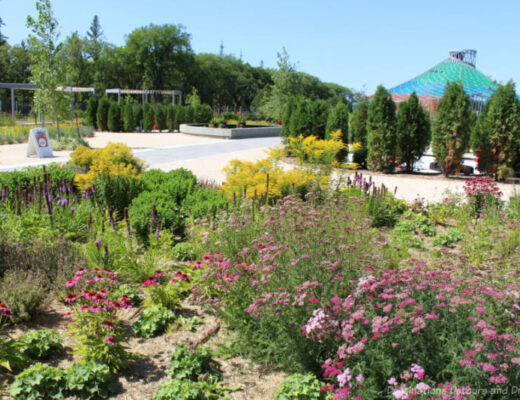 Pantomime: No You Shouldn't, Yes I Should