A Gaudí-created park in Barcelona, Spain

Park Güell (pronounced gway) is a municipal garden located on El Carmel hill in the upper part of the Gracia district in Barcelona. Designed by Antoni Gaudí, this green space contains interesting architectural elements and offers broad views of the city below. The park is one of the largest green spaces in Barcelona. The park contains two large areas: the 12-hectare monumental area, designed as a UNESCO World Heritage Site, and 8 hectares of woodland.

Park Güell was originally meant to be a gated residential development for Barcelona’s nouveaux riches. In 1900, developer Eusebi Güell commissioned Gaudí to design and construct the park. There were to be 60 triangular-shaped plots with a complex network of paths, viaducts, and steps to cope with the lie of the land.

Park Güell failed as a real estate venture. Only two homes were built. Complex conditions for the sales of plots, lack of a suitable transport system, and the exclusive nature of the development resulted in a lack of buyers. The venture was abandoned in 1914. The park became a large private garden, which Güell allowed to be used for public events. Developer Eusebi Güell had converted the old mansion already on the property into his residence and lived there until 1918. The city purchased the park in 1922.

Today, the park has a variety of beautiful green spaces for relaxation and leisure use. Many architectural elements of Gaudí’s designs for community life remain making a visit to the park a bit of a magical experience.

A twin flight of stairs, known as the Dragon Stairway, leads from the entrance esplanade to the Hypostyle Room, designed to be a market place for the estate. The stairway, shown in the photo at the top of this post, is flanked by two walls with merlons that form terraces under which there are grottos. The stairway is divided into three sections, along which the water from a fountain runs. There are goblin shapes on the first landing. Halfway up the stairs, you’ll find the emblem of Catalonia. Further up is the dragon, or salamander, covered with decorative tile-shard mosaic that has become the popular image of the park.

At the top of the stairwell, the Hypostyle Room, also known as the Hallway of Columns, is made up of 86 Doric-inspired columns. The ceiling is formed of small domes constructed using the traditional technique of clay bricks decorated with original tile-shard mosaics made by Josep M. Jujol, one of Gaudí’s assistants. The terrace was designed to be a market place for the residential area.

The green space begins beyond the terrace. Gaudí respected vegetation, such as carob and olive trees, already growing on the property. For new vegetation, he chose Mediterranean species requiring little water.

Gaudí planned three viaducts to snake their way up the mountain. They are suspended on a structure of sloping columns and vaults made from unhewn stones taken from the site itself.

What is now known as the Austria Gardens was one of the zones to be used as plots in the estate. When the space was turned into a public park, the zone was used as a municipal plant nursery. It got its name through a donation of trees from Austria in 1977.

Gaudí created viaducts throughout the park for carriages and automobiles. The cave like structures at the sides of the main entrance staircase were meant as garages for automobiles. The Pathway of Columns, designed like a surfer’s tube, was intended for cars to drive across, with pedestrians in the arcade below.

In 1906, Gaudí bought the show house built by his assistant, Francesc Berenguer, and moved in with his father and niece. His father died that same year and his niece in 1912. Gaudí remained in the house until 1925, when he moved into his workshop at La Sagrada Familia. Today, the house Gaudí lived in is a museum containing pieces of furniture he designed.

A large esplanade at the centre of the park was called the Greek Theatre and planned to stage large open-air shows that could be watched from surrounding terraces. It is now called Nature Square. Part of it is built into the rock and the other part supported by the Hypostyle Room. It features an undulating bench covered with tile-shard mosaic planned by Josep M. Jujol. An architrave on which the undulating bench is placed has a conduit running inside it to collect the rainwater that filters down from the square, and send it on to an underground tank, which has the stairway dragon’s mouth as its overflow. The square also offers great views of the city.

In addition to providing a natural green space and urban living, Gaudí envisioned the park with religious significance. The park’s highest point is Calvary, where a stone tower with three wooden crosses represents the hill where Christ was crucified. The walk from the low end of the park to Calvary represents the journey to spiritual enlightenment.

When I visited the park, there were street performers in several locations. The most bizarre entertainer, a man with teased hair, dressed in leopard skin tights, playing guitar and singing mostly meow sounds, was at Calvary. Although he garnered many laughs and photographs, he seemed out of place in what was meant to be a spiritual place. It was demeaning. I think Gaudí would be appalled.

There is a fee to visit Park Güell and the number of visitors allowed per hour is regulated. This is done to protect the park. The fee was introduced in October 2013. According to Barcelona City Council statistics, Park Güell averaged over 25,000 daily visitors in 2012, an 73% increase from 2007. At peak times, 1,200 people entered the park in a 15 minute period. I visited in summer of 2013 when access was free and not limited. The park was crowded. I can understand the concern for protecting it. The monumental area, the area near the front entrance with the stairway, terrace, and columns, is the most fragile part and was also the most crowded.

Residents of the surrounding neighbourhoods still have free access at specific times when the park is closed to other visitors. Check the website for details of fees and entry times. Even with a fee, the park is worth visiting. 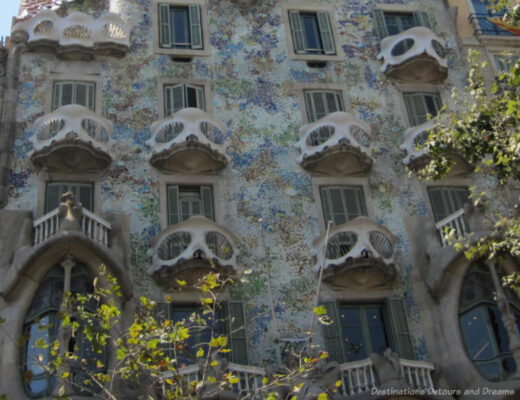 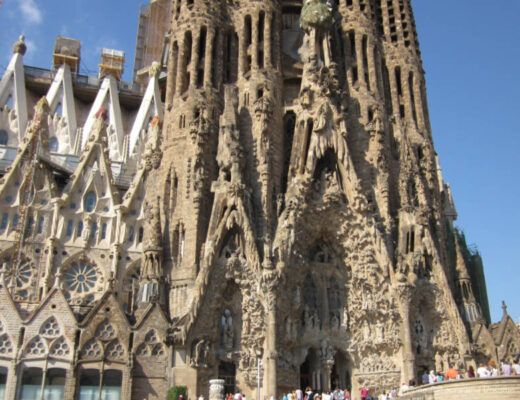