Exploring the city that won the Royal Gold Medal for architecture Barcelona is the largest city in Catalonia, an autonomous community of Spain. Modernisme is the city’s defining architectural style. It is a colourful, free-flowing, organic style that began in 1888 and was active until about 1910. It built upon the Catalan Gothic style, and aimed to create objects that were both functional and decorative, utilizing the latest construction techniques. In the late 19thcentury, Barcelona was booming, expanding, and in the midst of a Catalan cultural revival movement, an environment that fostered the Modernisme movement. Hundreds of buildings were constructed, most in the newly expanded area of the city, the Eixample area. 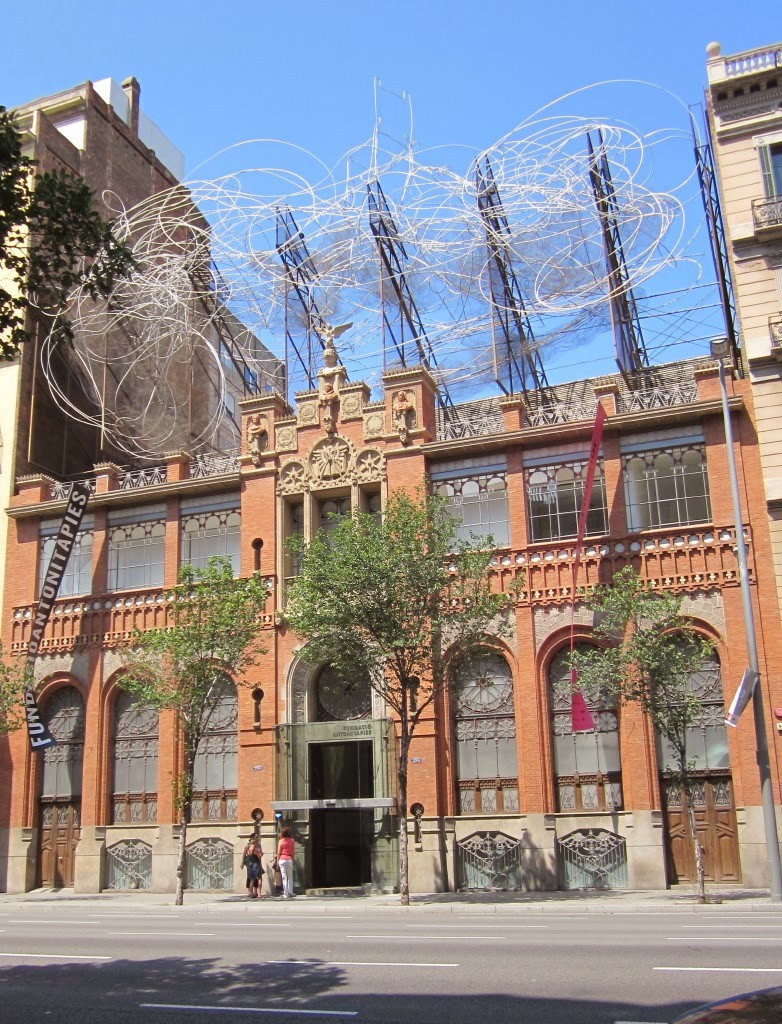 Cloud and Chair structure by Fundació Tàpies atop Casa Montaner i Simón, one of the first Modernisme buildings 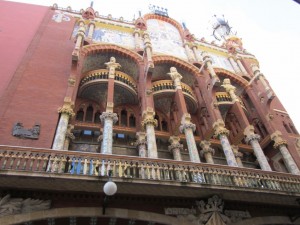 The Palau de la Música Catalana, a concert hall designed by Lluís Domènech i Montaner and built between 1905 and 1908 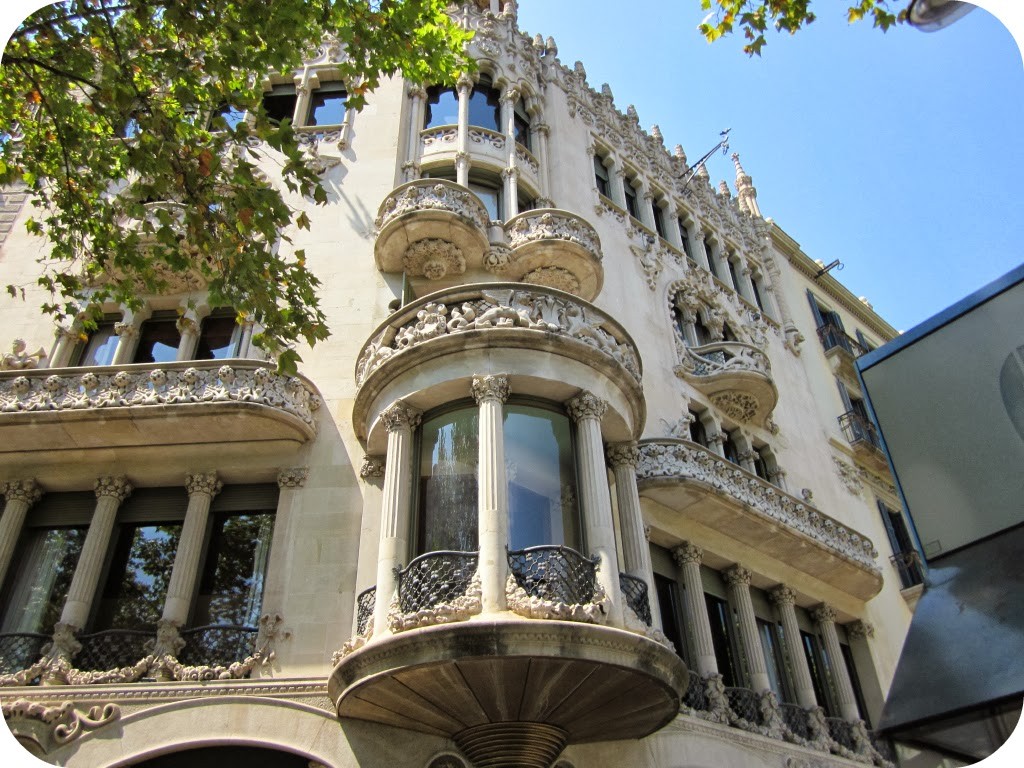 Casa Lleó i Morera, designed by Lluís Domènech i Montaner and built in 1902

Modernisme architecture features sinuous lines, bright colours, and lots of ornamentation. It incorporates elements of Gothic and Arab styles, such as ceramics, spires, towers, repeated patterns, as well as different mediums, including iron, tile, and stained glass. The result is spectacular, even if it sometimes seems a little “over the top”. 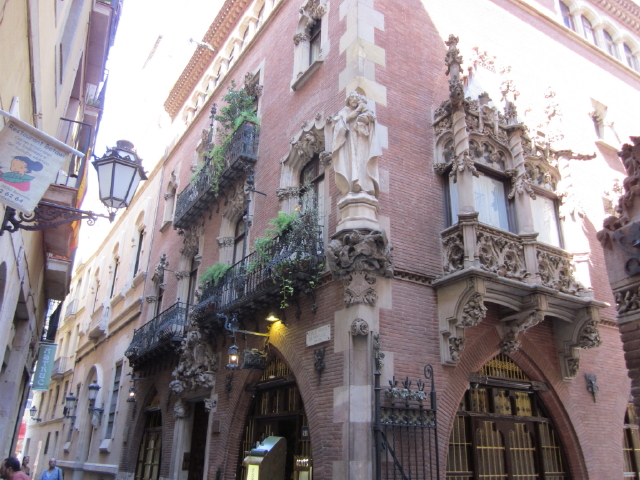 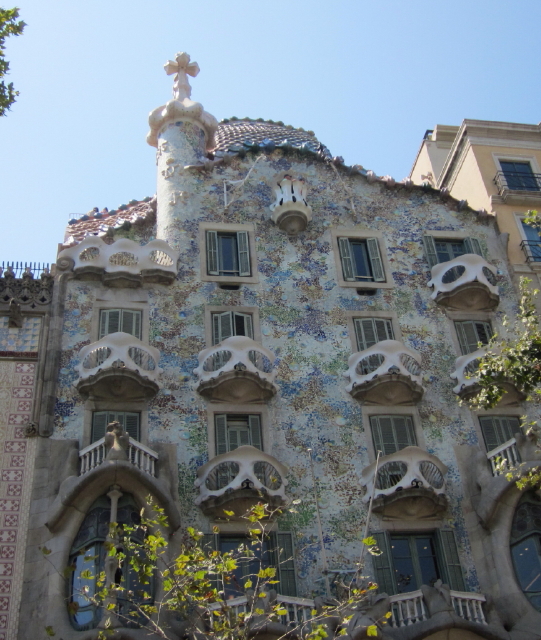 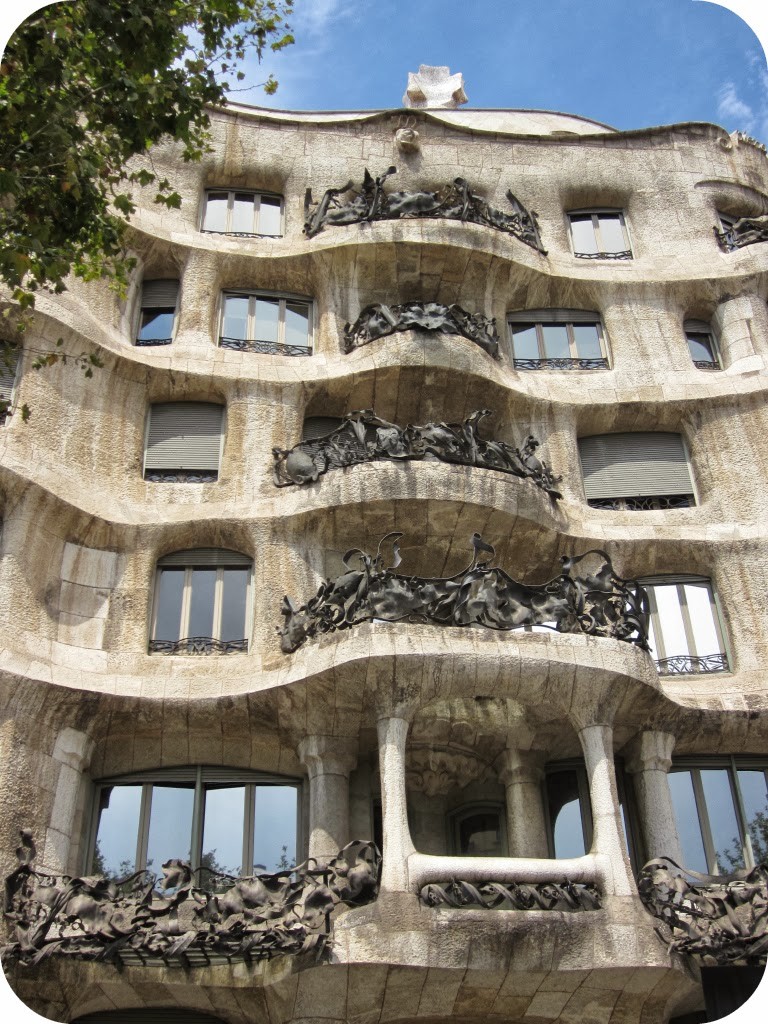 Casa Milà, better known as La Pedrera, designed by Antoni Gaudí and built between 1906 and 1912

Antoni Gaudí is the architect most frequently associated with Barcelona. He went beyond the bounds of modernism. His works are dominated by organic forms. His techniques for optimizing structures were revolutionary and ingenious. See my post Barcelona’s Gaudí: Madman or Genius? 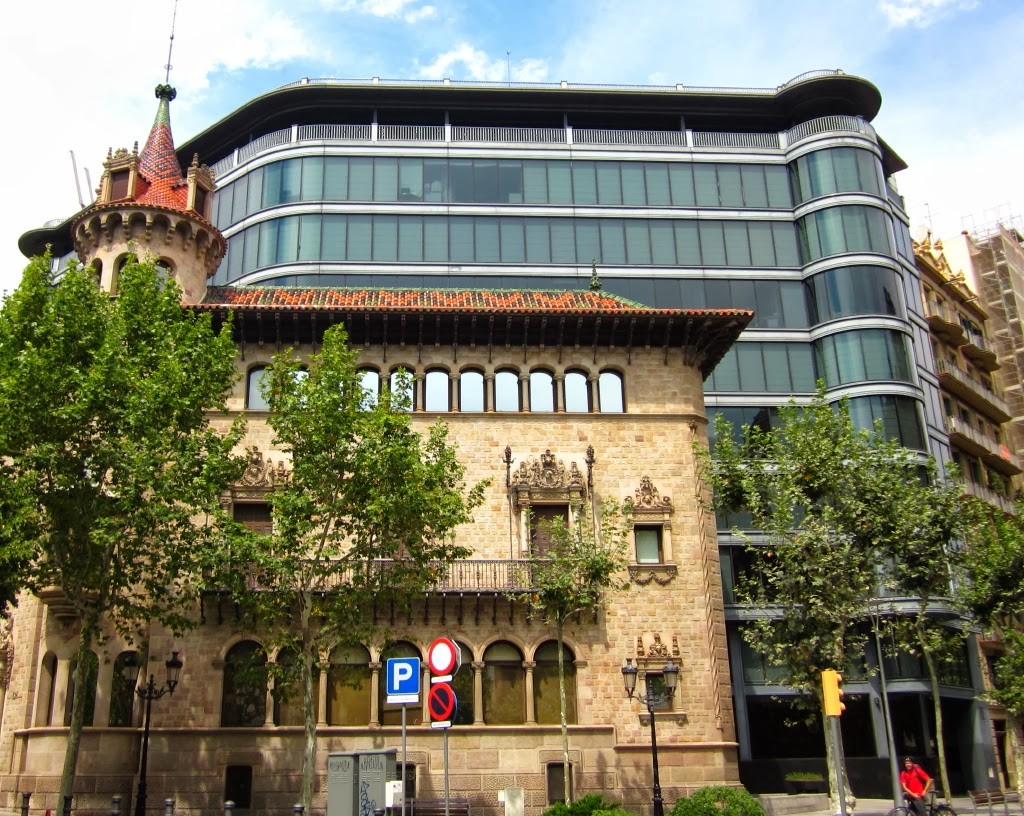 Casa Serra, built by Josep Puig i Cadafalch in 1908 and controversially adapted after the fall of Franco to accommodate the Diputació de Barcelona, the central government body

It is the unique Modernisme architecture that Barcelona is most famous for, but that is not the only architectural style to be found in the city. 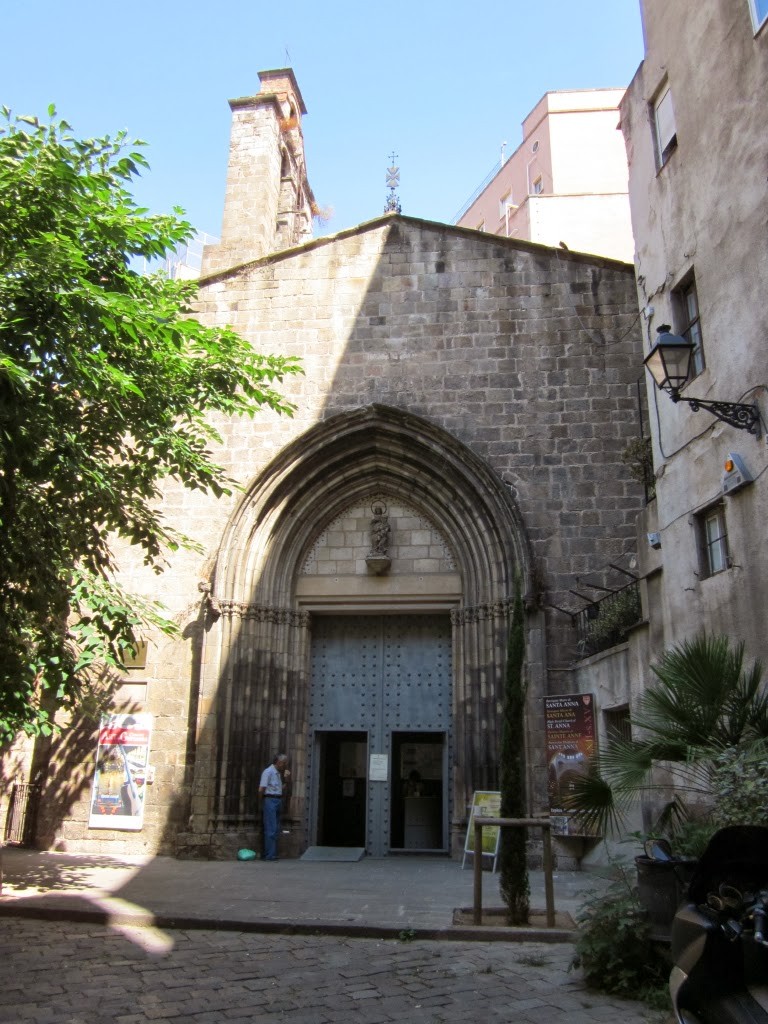 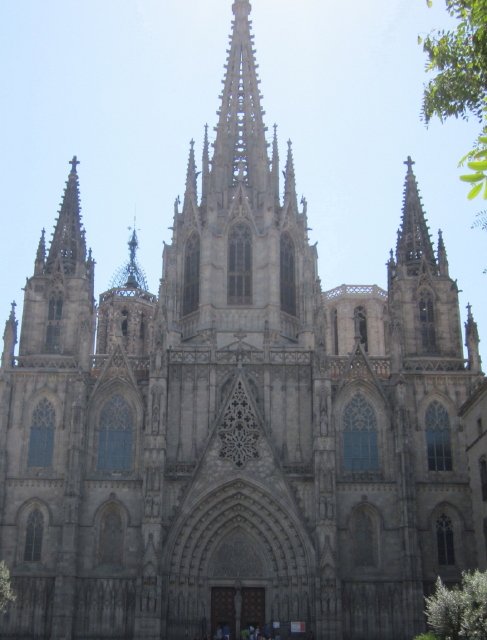 The facade of the Cathedral of Barcelona contains many Gothic motifs: a pointed arch, robed statues, gargoyles, and bell towers with winged angles. Although the building itself dates from the fourteenth century, the facade is a neo-Gothic reinterpretation from the nineteenth century. 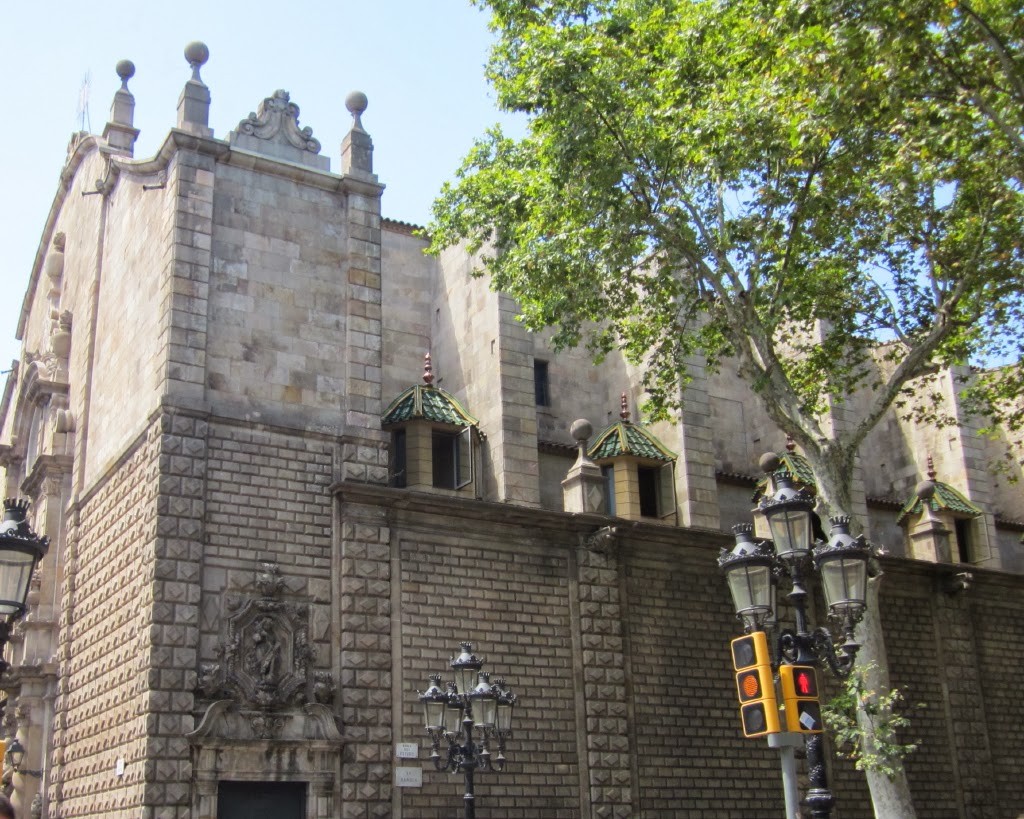 The seventeenth century Betlem Church on Las Ramblas is one of the few Baroque buildings in Barcelona. The Baroque style is common in other parts of Spain, but during the Baroque period (1500-1850), Barcelona was relatively poor and little building occurred. 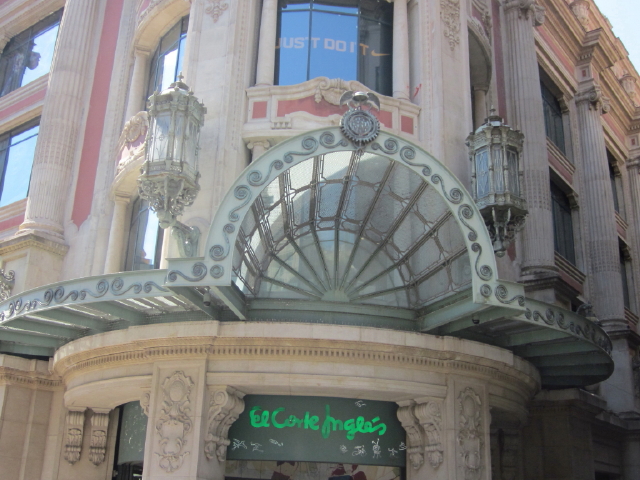 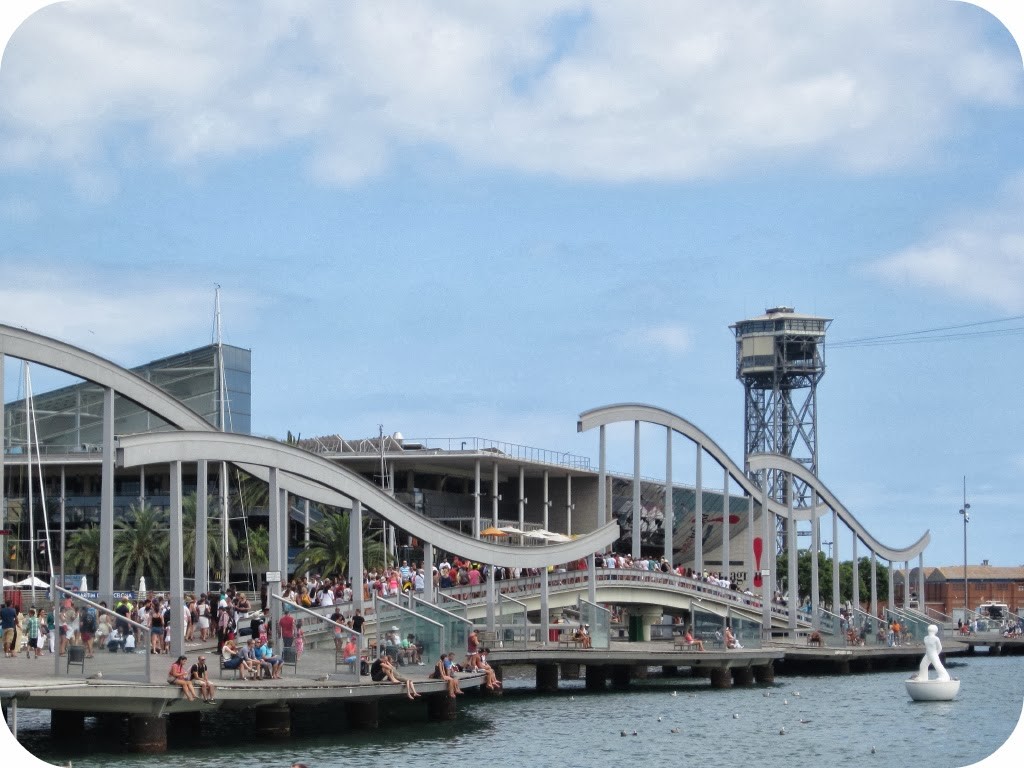 An urban renewal project, undertaken as part of preparations for the 1992 Barcelona Olympics, turned the city’s obsolete, run-down harbour area into a yacht basin and entertainment centre. The Rambla de Mar, a wooden pedestrian bridge connects to Maremàgnum, a shopping and entertainment complex. The bridge was designed by architects Viaplana & Piñon. Its wavy pattern symbolizes the connection of the city with the Mediterranean. 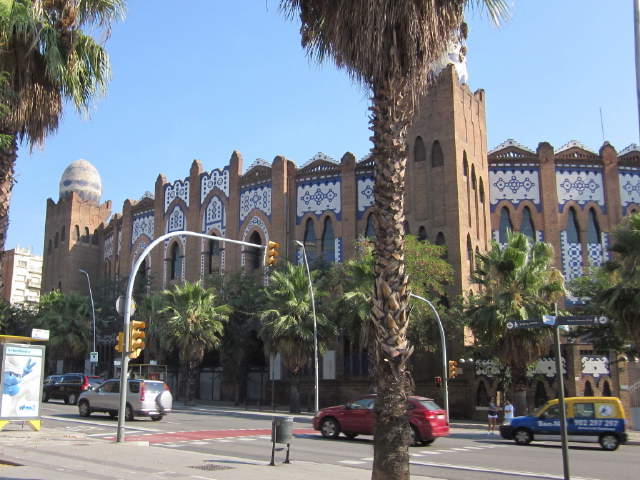 The Monumental Bullring of Barcelona is a mixture of Mudéjar (Moors) and Byzantine styles.
Inagurated in 1914, it now houses The Bullfighting Museum of Barcelona and hosts concerts. Catalonia banned bullfighting in 2011. Casa Bruno, known by locals as Casa dels Paraigües (House of Umbrellas), was an umbrella shop in the 1880s.
In a style similar to Modernisme, it incorporates Egyptian imagery and Oriental symbols.
Umbrellas adorn the walls and a Chinese dragon holding a lantern juts out from the corner.
Dragons are an important Catalan symbol for Barcelona, connected to its dragon-slaying saint, St. George (Jordi).

The Barcelona Fish, a huge fish sculpture by Frank Gehry placed on Barcelona’s waterfront for the 1992 Olympics 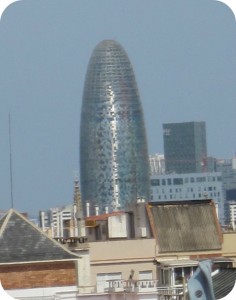 The 38-story Torre Agbar was built by the Grupo Agbar, the municipal water company. It opened in 2005. The coloured aluminium sheeting reflects light and consists of 40 different colours of high gloss and the tower changes colours with the light. According to Jean Nouvel, the French architect who designed the building, its shape was inspired by Montserrat, a mountain near Barcelona, and the shape a geyser rising into air. He also described it as having phallic character. Its unusual shape has earned it many nicknames, including the Suppository and the Gherkin. Do you have any Barcelona architecture favourites?