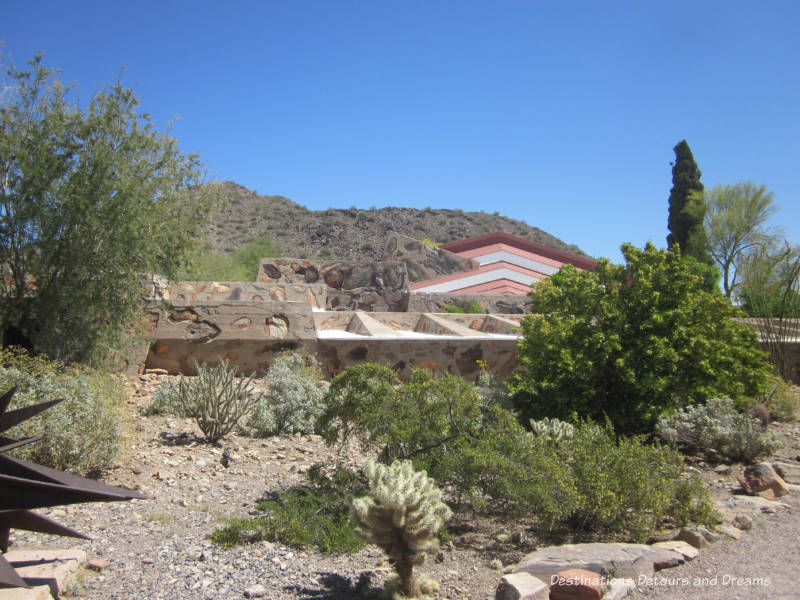 Frank Lloyd Wright was named as the greatest American architect of all time by the American Institute of Architects in 1991. He called his architecture “organic” and believed buildings and the space they inhabited should integrate into one coherent whole. Taliesin West in Scottsdale, Arizona was his winter home and test laboratory for desert living designs. Taliesin West has served as one of the campuses for the Frank Lloyd Wright School of Architecture. After 88 years, the school will close its doors.

Today, tours provide the public with the opportunity to see his desert masterpiece and gain insight into the man. 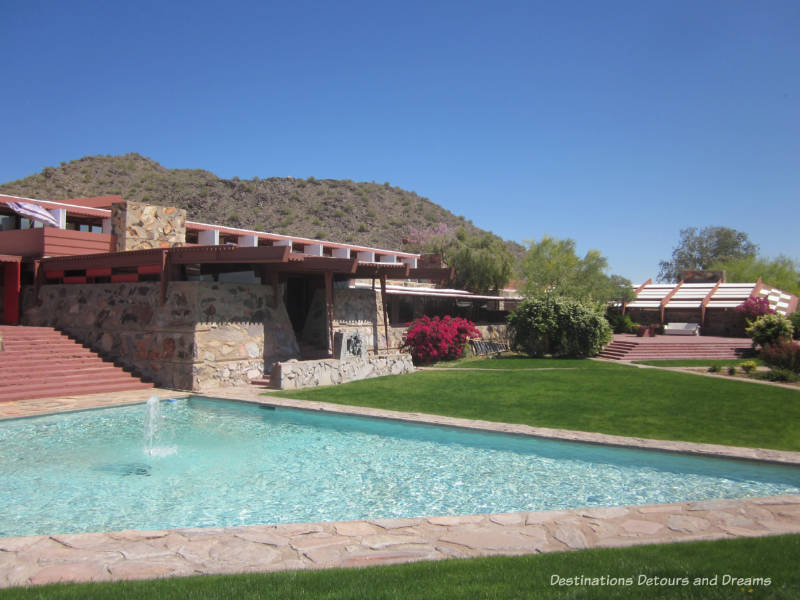 Yard at Taliesin West. Grass and shallow pools for the children.

Wright began building Taliesin West in the Arizona desert in 1937 at the of 70. He purchased approximately 800 acres of government land for $12.50 an acre, including water rights. Many people told him there was no water on the land, but he found water. The well is still in the same place today as when it was built and still supplies all the water for Taliesin West. 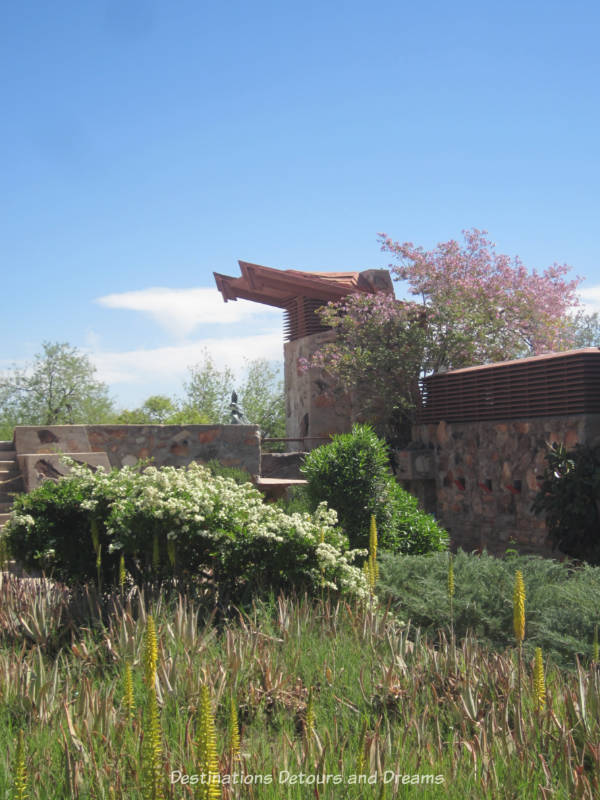 Buildings were made of wood, cement, and stone. Stones from the properties have been inset into cement, placed as per Wright’s direction. The ceilings were canvas, prized by Wright for the natural light it let in. Indoor gutters along the wood rafters took rain away. For the first ten years, none of the buildings had windows. Dust and debris easily blew in. Canvas shades could be lowered in particularly inclement weather. It took Mrs. Wright ten years to convince her husband to put in windows. 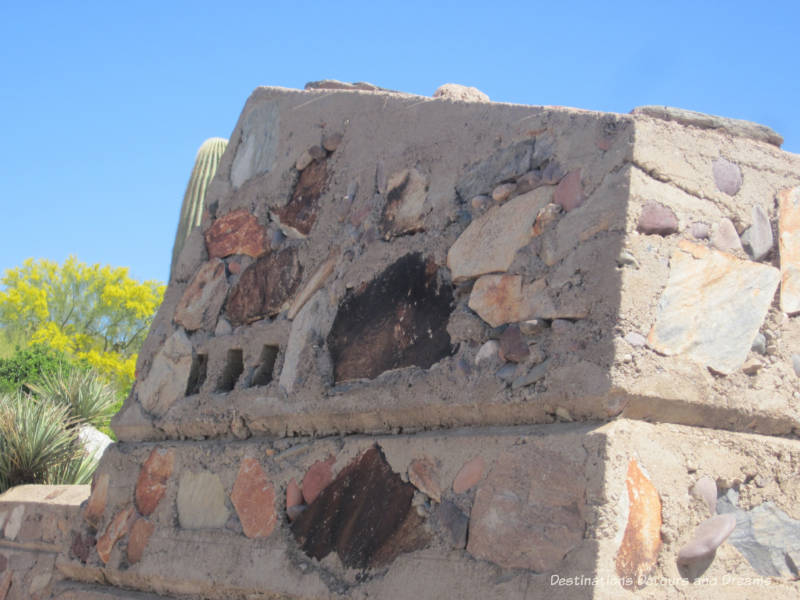 The angle here mimics the mountains behind Taliesin West

Taliesin West was the winter home for the Wright family and his apprentices in the “Taliesin Fellowship” architectural school. It was a total learning experience that included farming, gardening, cooking, and the study of nature, music, and the arts. The Wrights used no hired staff. They and their apprentices did all the chores. The Wrights never lived at Taliesin West in the summer. When summer neared, they’d take down the canvas and put all the furnishings in a shed. The Wrights and their apprentices headed back to Taliesin in Wisconsin. Today, the buildings are used year round and air conditioning has been added. 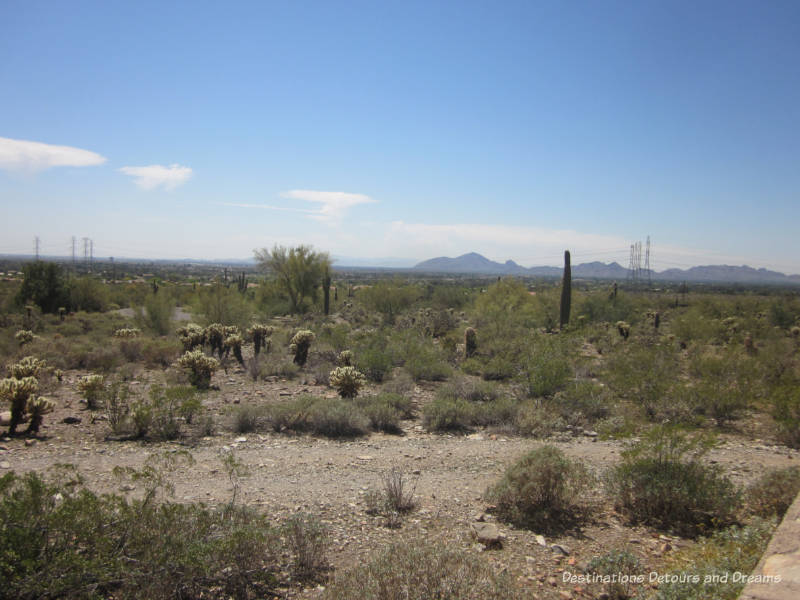 View from Taliesin West toward Scottsdale

Scottsdale development now surrounds all of Taliesin West, but when Wright first acquired the land the city was miles away and he had an unobstructed view of the desert. When power lines began to appear in the late 1940s, he lobbied all the way to President Harry S. Truman to get the lines buried. He lost and the lines were strung above ground. Frank Lloyd Wright moved the Taliesin West entrance to the rear, away from the valley. Electricity lines at Taliesin West are buried. 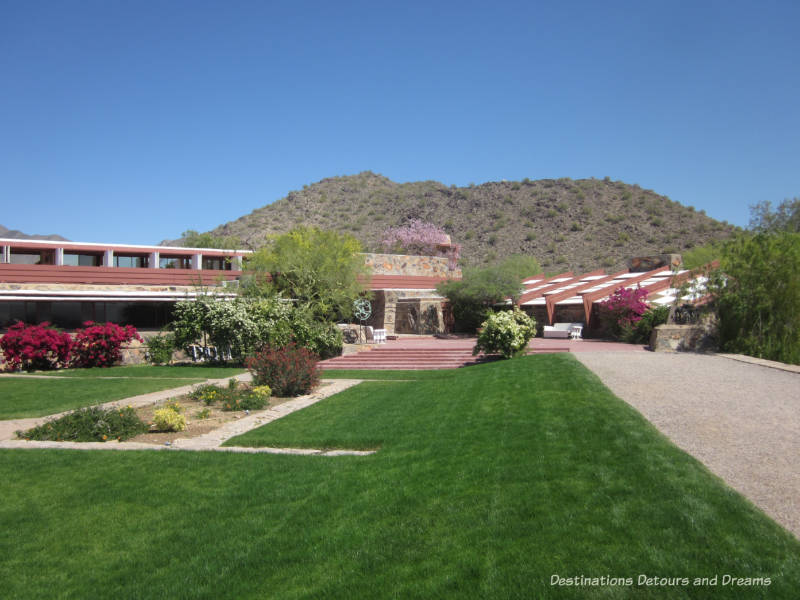 Wright entertained frequently at Taliesin West. He believed architects needed social skills and his apprentices entertained and socialized at Taliesin Evenings. Wright was a movie fan, often watching full uncut versions. Over the course of his time at Taliesin West, he built three different theatres, re-purposing the previous theatres. 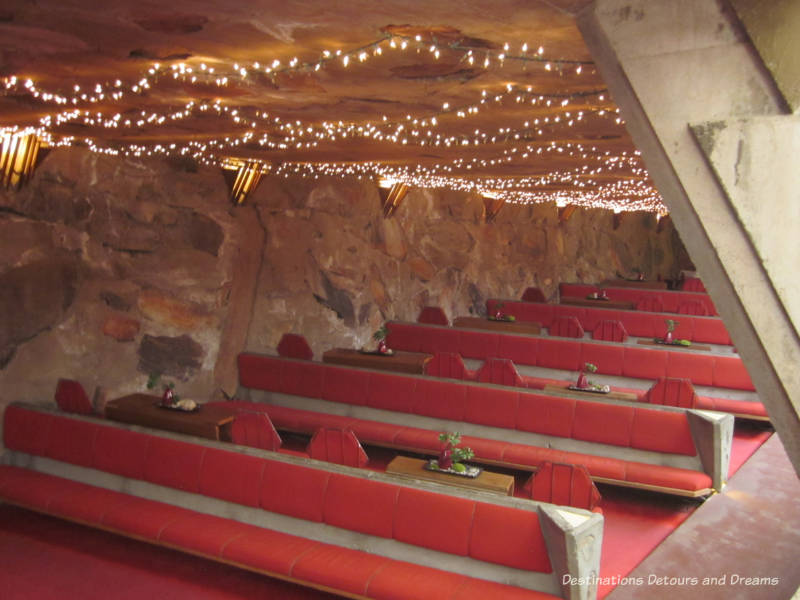 The Insights Tour allowed me into the private living spaces of the Wrights. Doorways are low, Frank Lloyd Wright height, the tour guide said. He was 5 feet, 8 ½ inches tall. Inside the living room, wood chairs were covered with red-orange cushions. Photographs are not allowed in the private living space, but when I looked through photos I’d taken of a previous visit in 2005, I discovered one taken in the living room. (I can’t remember if photos were allowed then or whether I took it before realizing I wasn’t allowed to.) The cushions in that photograph are blue. When upholstery wears out, it is redone in a colour scheme that would have been used at some point in time at Taliesin West. As the tour guide pointed out, Taliesin West was always changing, as Wright and his apprentices tried out new ideas and experimented with new materials and structures until Frank Lloyd Wright’s death in 1959. 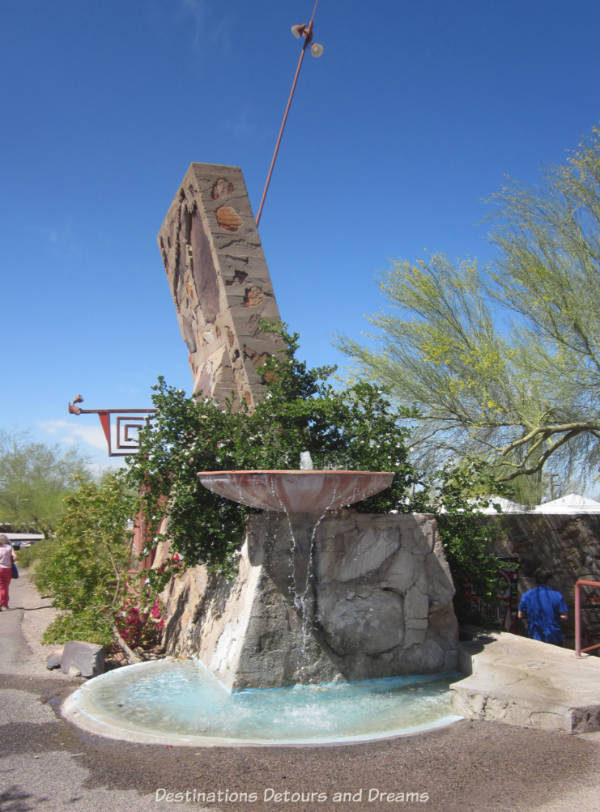 At entrance to Taliesin West 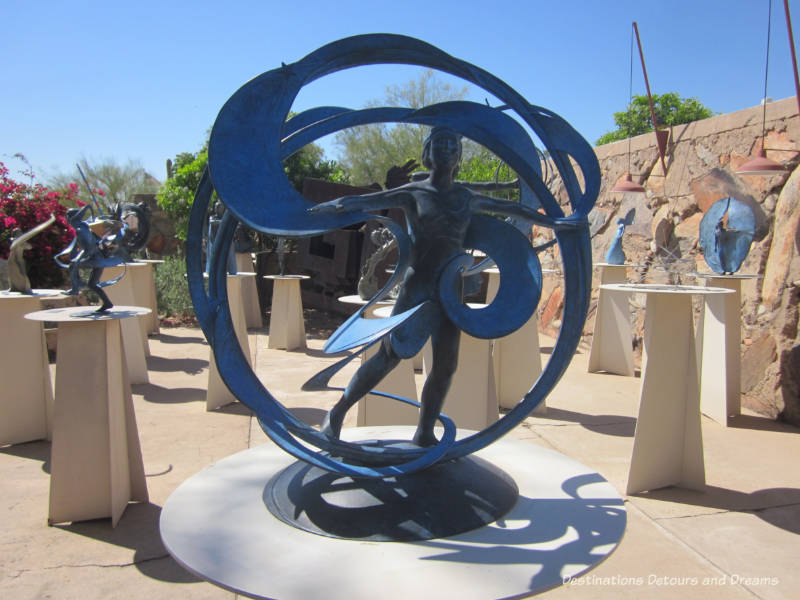 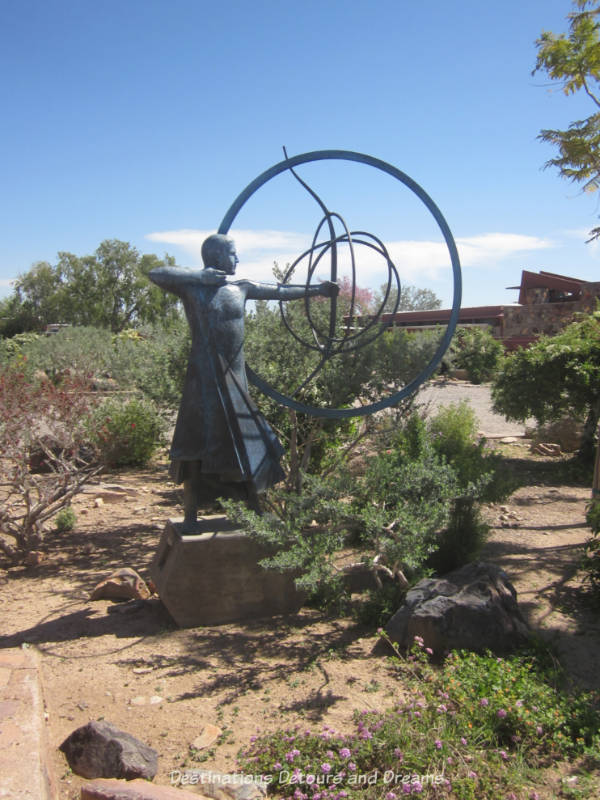 The tour guide mentioned several times that Frank Lloyd Wright was all about angles, lighting and shadows. Many features at Taliesin West illustrate his architectural and life philosophy. Check the website for the various types of tours available 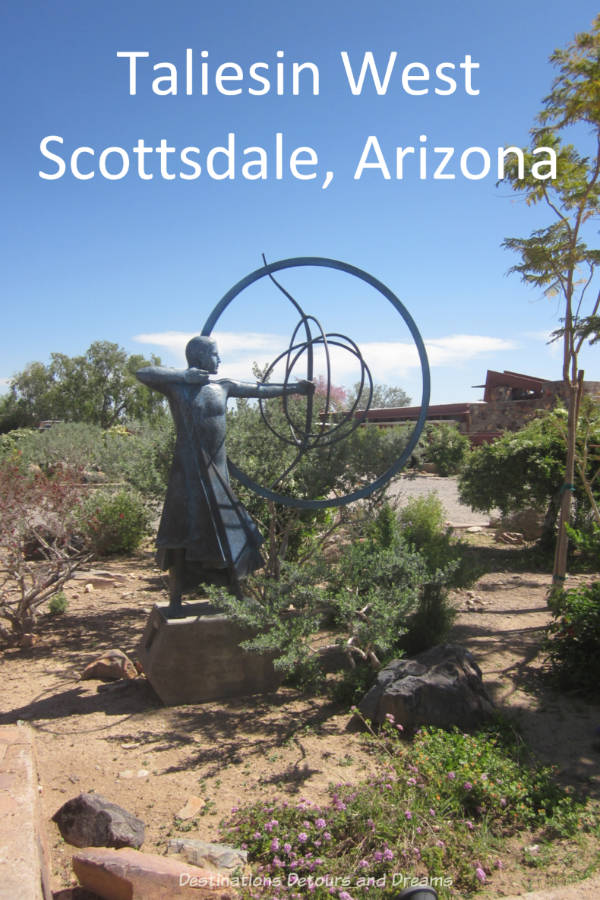 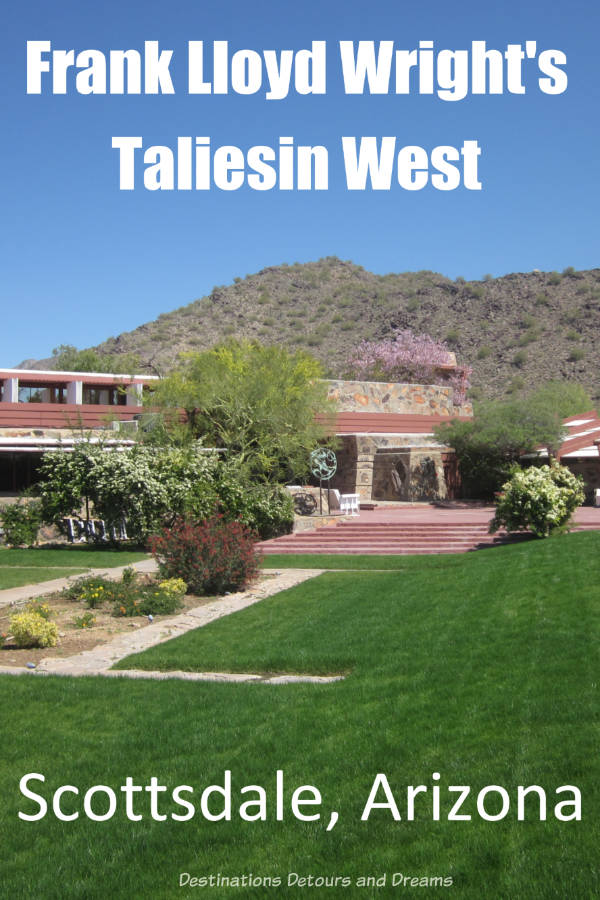 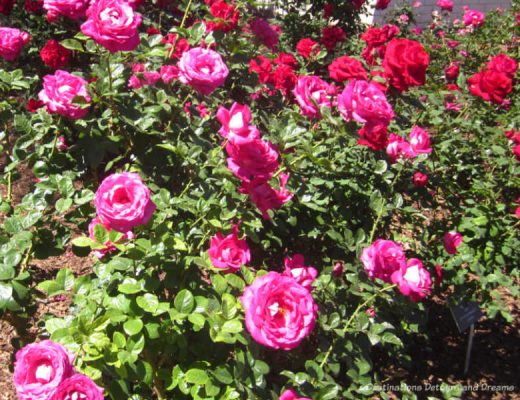 Roses in the Desert