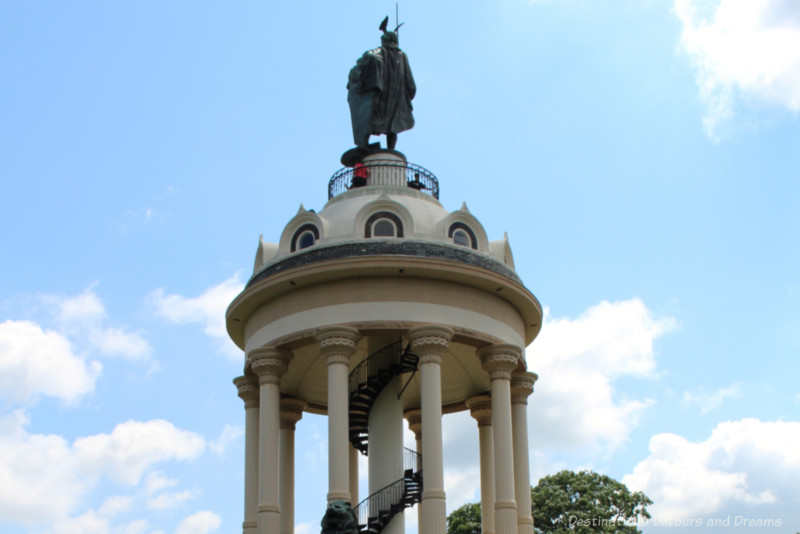 A Visit to New Ulm, Minnesota: Learning its history and experiencing the Most German Town in America

(Disclosure: I was a guest of Explore Minnesota and Visit New Ulm as part of a pre-conference tour at the TBEX bloggers’ conference. Observations and opinions are my own.) 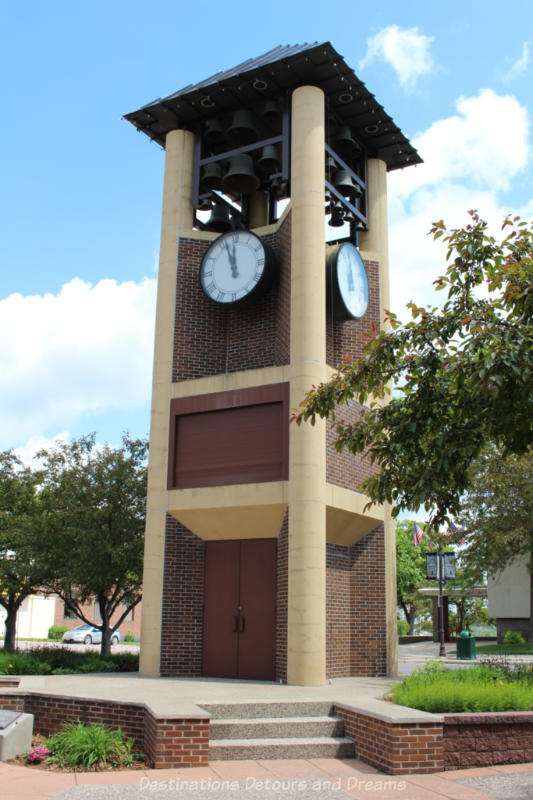 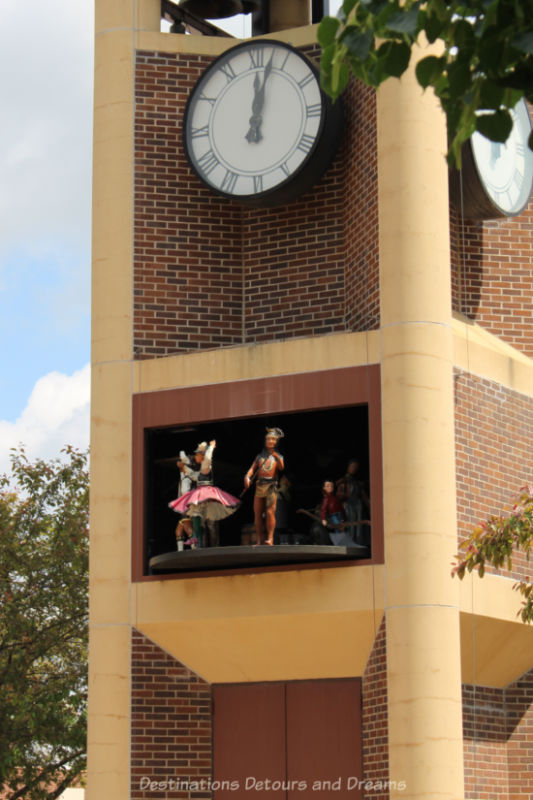 Figurines dancing during the performance 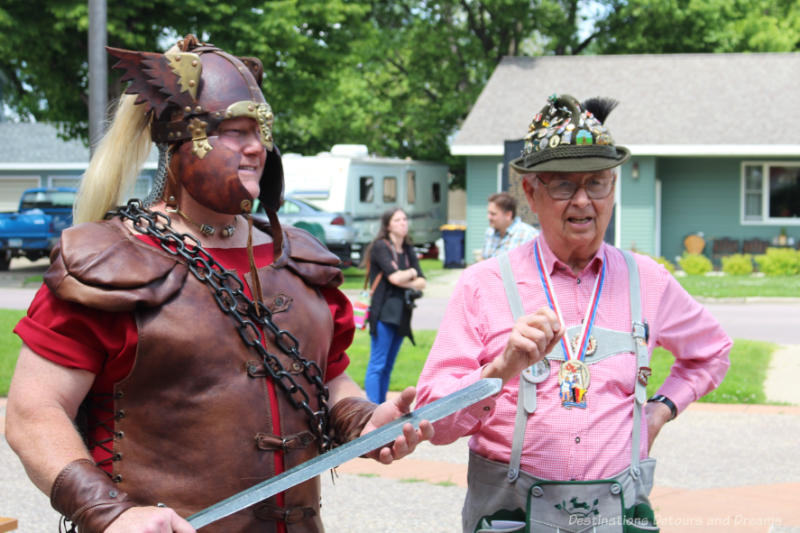 Local resident George L. Glotzbach (shown at the right in the above photo), clad in traditional lederhosen,  met our tour group at the Glockenspiel. The New Ulm Convention and Visitors Bureau named George as 2016 New Ulm Tourism Person of the Year because of what he does to promote tourism through showcasing the town to visitors and sharing its stories. Over lunch, George told us about the history of the town, sprinkling in colourful stories from his own family history. George’s great-great grandfather settled in New Ulm in 1855. His great-great-grandfather later drowned while ferrying a barrel of whisky across the river. George has since passed away, in 2020 at the age of 89.

A group called the “Chicago Land Society” selected the site of New Ulm in 1854. Many within the group came from Württemburg in Germany. They named the town after Ulm, the largest city in Württemburg. In 1856 a group of Turners from Cincinnati arrived in New Ulm. The Turners were a society of liberals and free-thinkers. Once in the U.S., they built gymnastic clubs (“sound mind sound body”) similar to what they had in Europe and sought to preserve their culture. They were anti-slavery and anti-prohibition, and advocated free public education and separation of church and state. When they arrived in New Ulm, the previous group of German settlers had lots of land, but had become strapped for cash. The Turners were land-poor but cash-rich. The groups merged and created New Ulm. 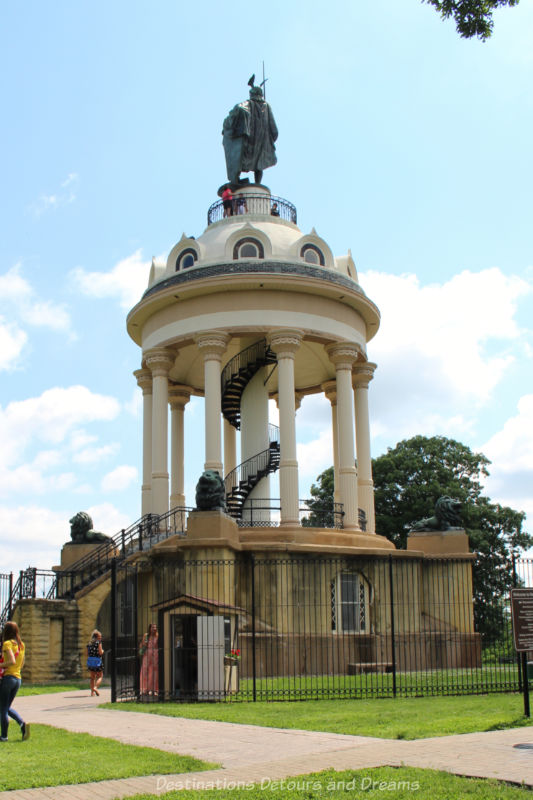 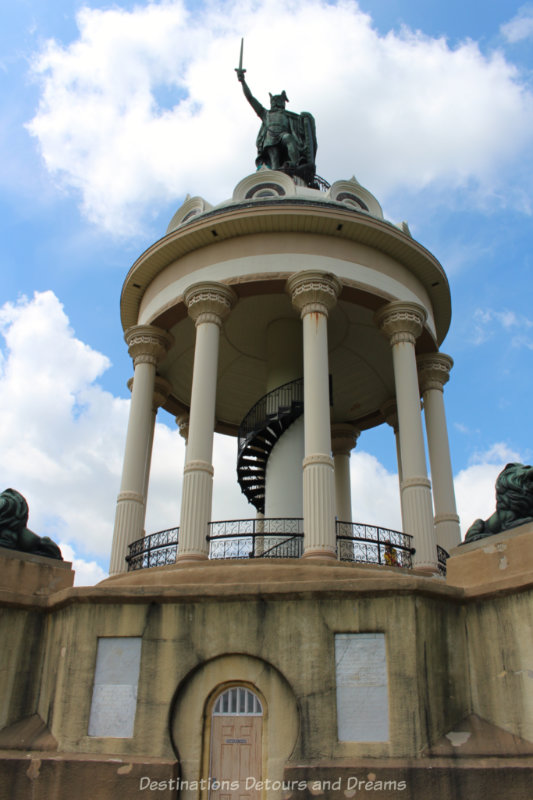 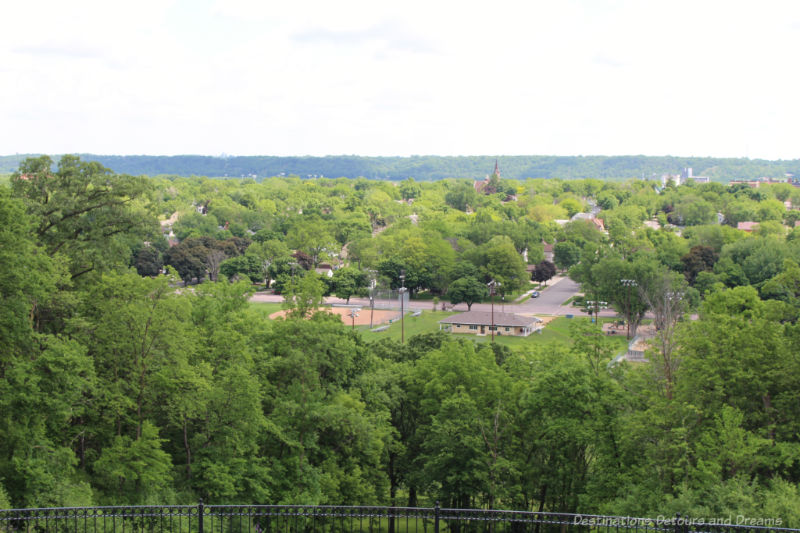 View of the rest of New Ulm from Hermann Heights Park 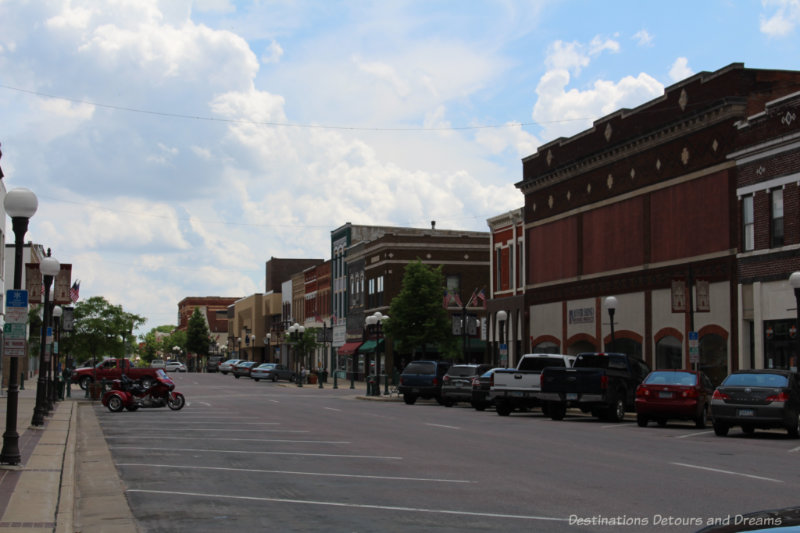 The main street in New Ulm

I did not have time this visit to browse through the shops in New Ulm. That remains something for a future visit. Shops carry local crafts and German imports. I was told to look for “gnome-made” fudge. 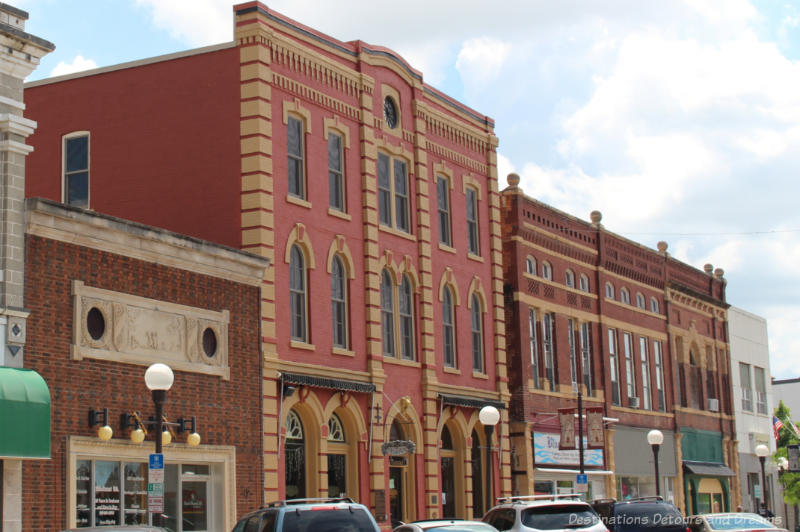 Buildings along the main street. The tallest one in the centre is on the National Register of Historic Places. It was built as the Grand Hotel in the late 1800s. It is now the Grand Center for Arts & Culture. 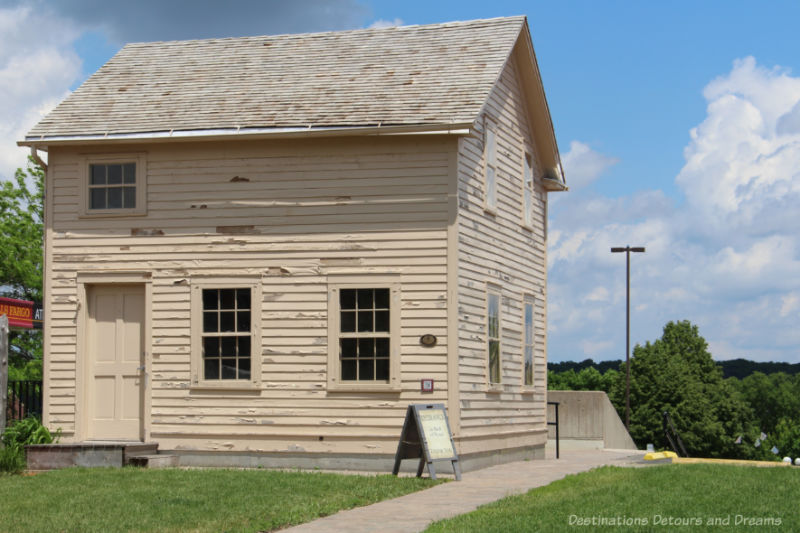 The 1862 Dakota War was a significant event in New Ulm’s history. The Kiesling House is one of only three downtown buildings to survive the war. It is the only surviving wood-framed house from that era in Brown County. It now houses a museum open from Memorial Day to Labor Day.

We stopped for lunch Veigel’s Kaiserhoff when I had a meal of sausage, potatoes, and sauerkraut. And Buddy’s Soda to drink. 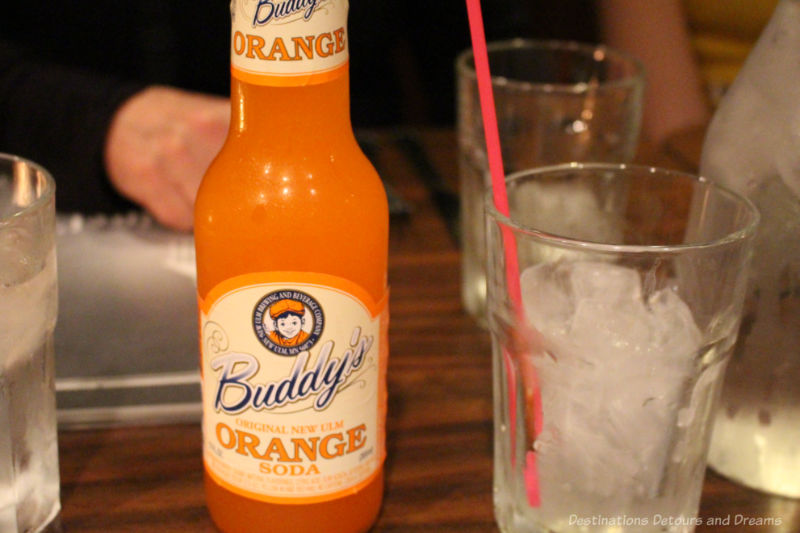 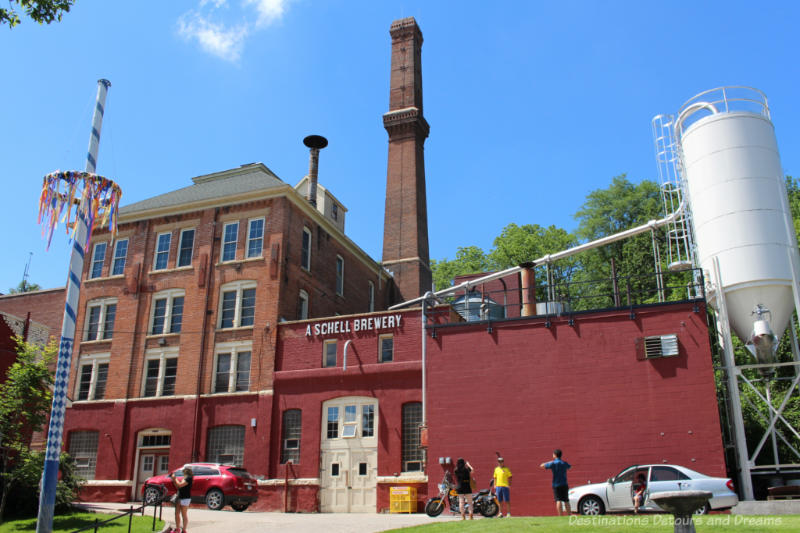 The Prohibition Era is long over. What would a German town be without beer? August Schell arrived in New Ulm in 1856 and realized the potential for a brewery. He rolled out his first barrel on a delivery wagon in 1860. Today Schell’s Brewery occupies beautiful grounds along the river and contains a brewing museum, tasting room, and outdoor gardens. We ended our tour to New Ulm with a tasting here. 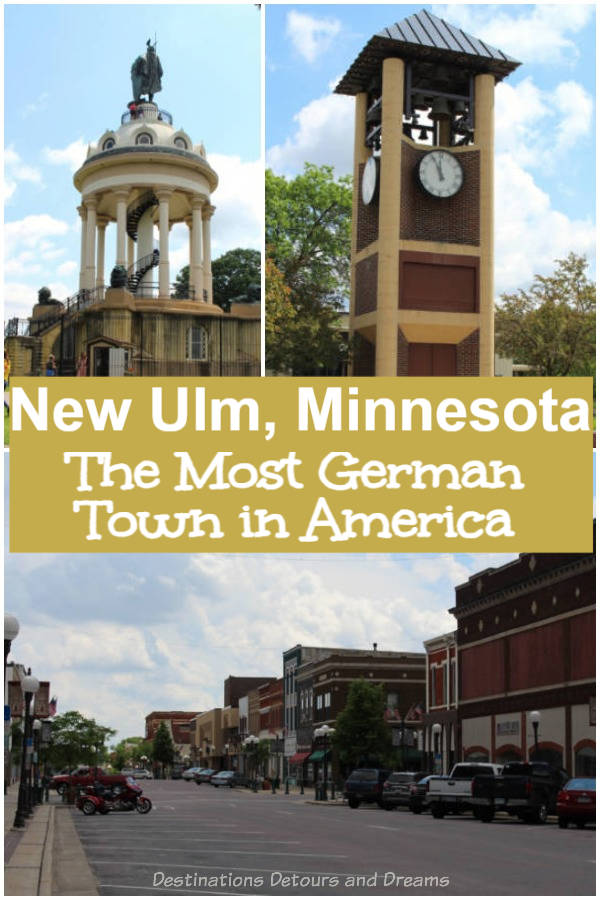