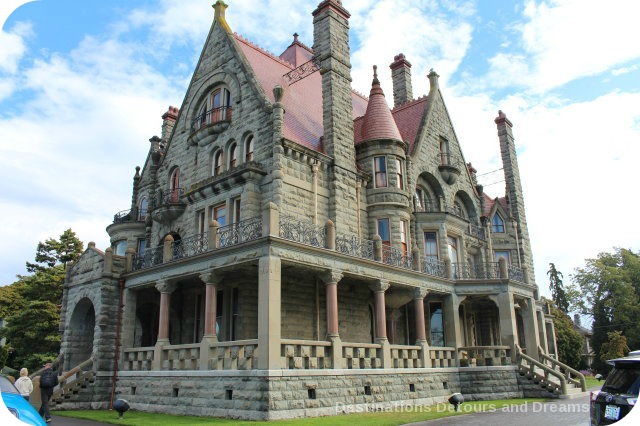 portrays upper-class life at the time

Craigdarroch Castle, a Designated National Historic Site, was built as a stately home for the wealthy Dunsmuir family in the late 1880s. From 1919 to 1979, the house served a variety of purposes, including a hospital, college and music school. Today the house is a museum restored to what it would have looked like in 1890. The museum provides a glimpse into the life of the house at that time. That is fascinating in itself, but what makes this museum even more interesting is that it isn’t just a frozen snapshot of time. Information on how the house was used over the years and the important role it played in the history of Victoria, British Columbia is showcased. It makes the experience of touring the museum feel like a living walk through history.

Robert Dunsmuir was a Scottish immigrant who made a fortune in Vancouver Island coal. Craigdarroch Castle was built between 1887 and 1890. Craigdarroch means “rocky oak place” in Gaelic. The Castle is 25, 572 square feet, including the basement. It had 17 fireplaces and was equipped with gas lighting as well as electric lighting, hot and cold running water, central heating, telephones and a burglar alarm system. The main walls are brick construction faced with sandstone from Dunsmuir’s own quarry.

Robert died in 1889 before the house was completed. He left his entire estate to his wife Joan, who moved into the house in 1890. She and her family lived in the house until her death in 1908. 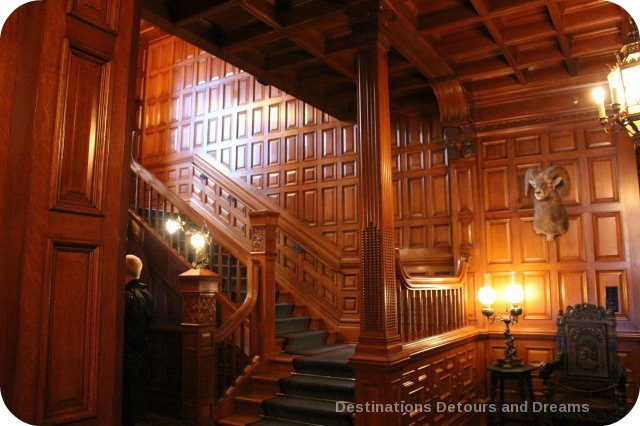 Panelling in the Main Hall and stairwell is white oak. Other woods used throughout the house include Spanish mahogany, western red cedar and Hawaiian koa. One side of the house served as the family’s home, the other side housed the servants. As I toured the house and imagined life at the time, the television series Downton Abbey kept coming to mind. 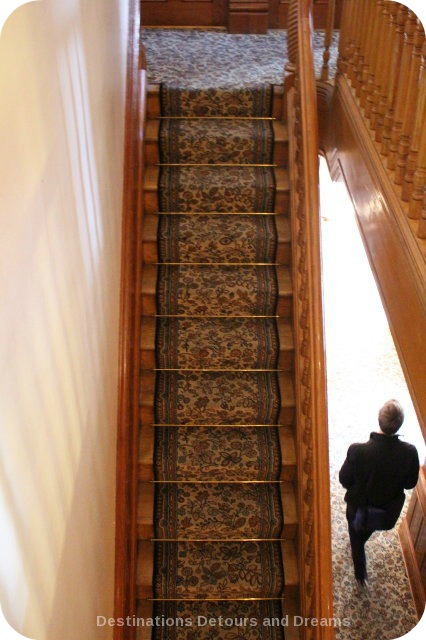 Servant staircase was not as grand.
It was narrower with fewer steps. 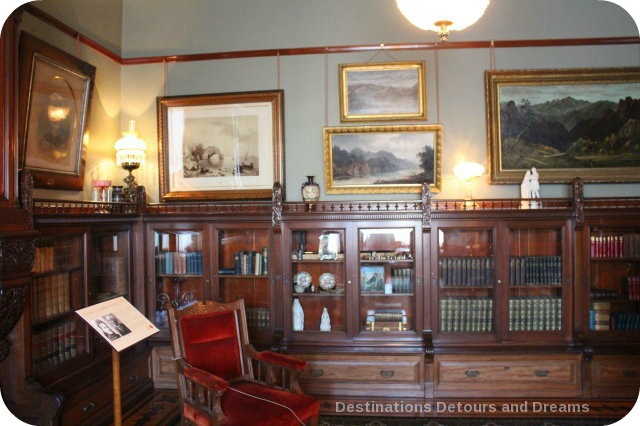 Spanish mahogany is featured in the Library 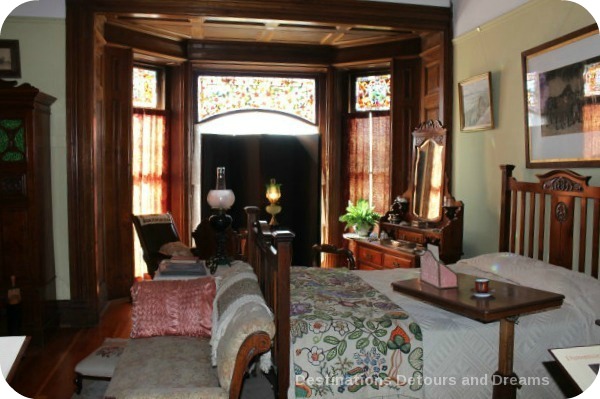 One of the Dunsmuir family bedrooms 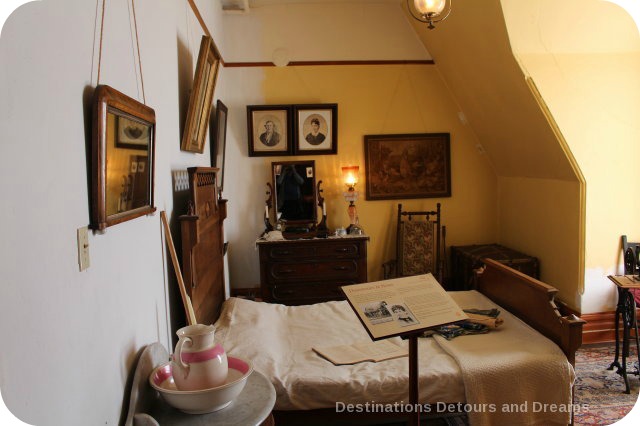 A servant’s workday would have been long, up to fifteen hours. No specific records about the life of the Dunsmuir servants have been found, but a sample maid’s day in a similar household in London is displayed. It started at 7 a.m. and was constantly busy until 9:00 p.m. when the maid got her supper before retiring to bed at ten. 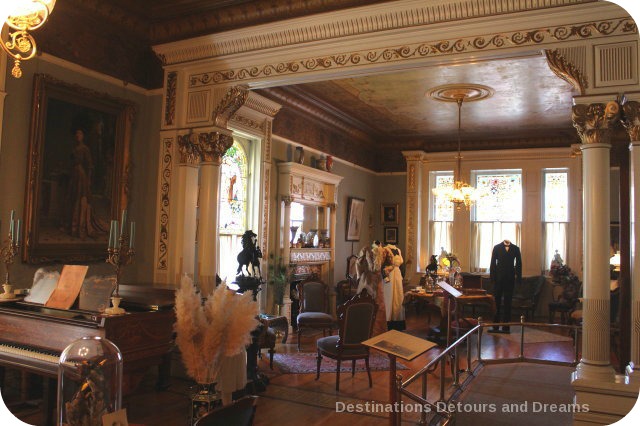 Floor stands in the rooms titled Dunsmuirs at Home identify what the rooms would have been used for and describe aspects of the family’s life. In the drawing room, they received guests, pursued the arts and entertained. Drawing rooms were sometimes divided with one side used by the family and the other for family and their guests.

Other floor stands throughout the house entitled Snapshots in History talk about how the house was used after the time of the Dunsmuir residence. From 1919 to 1921, the Castle was used as a military hospital for World War I veterans. It was one of three hospitals in Canada to house “long treatment cases and incurables.” During that time period, the drawing room was a recreation room for patients.

In 1921, Victoria College, an affiliate of Montreal’s McGill College, moved into Craigdarroch Castle with an enrollment of 160 students. During that time, the drawing room was a classroom and dance hall. In 1946, enrollment in the college rose to 600 with returning World War II veterans and the college needed more space. It moved to what is now the Lansdowne Campus of Camosun College. In the 1960s, the College transitioned to become University of Victoria and moved to the new Gordon Head campus.

The Victoria School Board occupied Craigdarroch from 1946 until 1968. The drawing room was used as office space during that time period. The Victoria Conservatory of Music used space within the Castle after the School Board vacated. At the same time, the Society for the Preservation & Maintenance of Craigdarroch Castle (Castle Society) began tracking down original house artefacts and planning for restoration. From 1969 to 1979, the drawing room was used as both a recital and lesson room by the Conservatory and a museum room by the Castle Society. In 1979, restoration began to use the Castle solely as a museum. 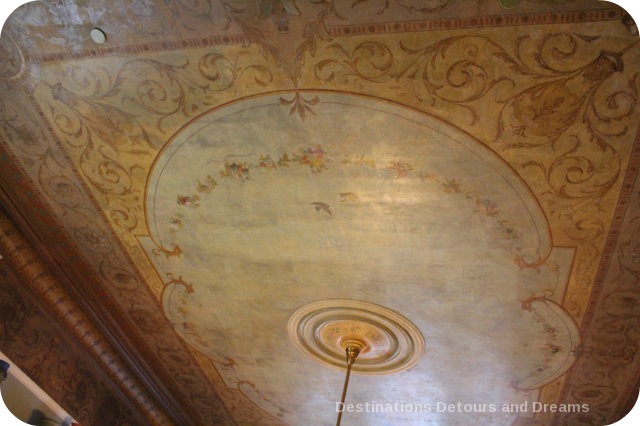 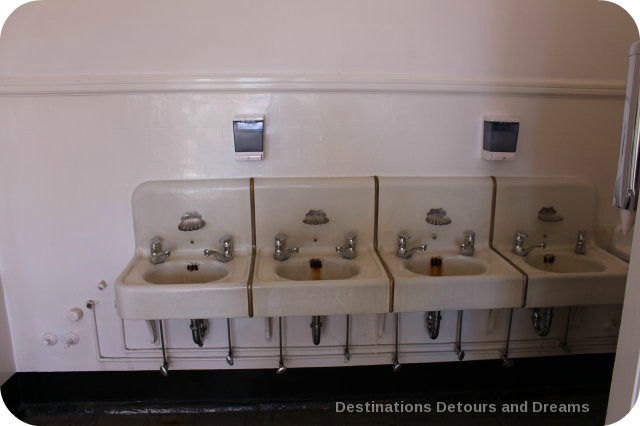 Sinks in the women’s public washroom date to 1919 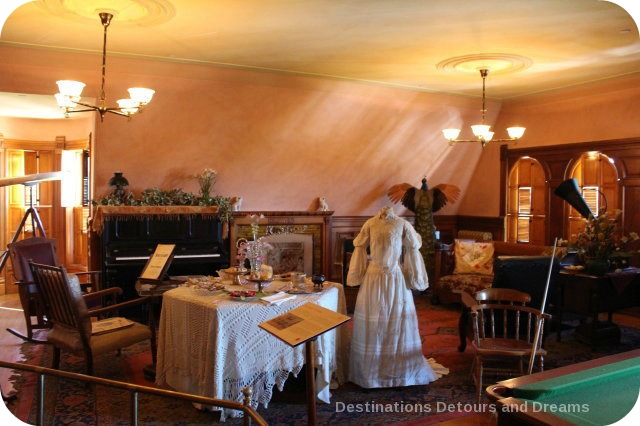 Mannequins dressed in period costume, such as the one shown in the Billiars Room above, are placed in rooms throughout the house and help create the atmosphere of the time. During the Castle’s hospital area the Billiards Room was one of the larger patient wards. It was later a classroom and assembly hall for Victoria College. 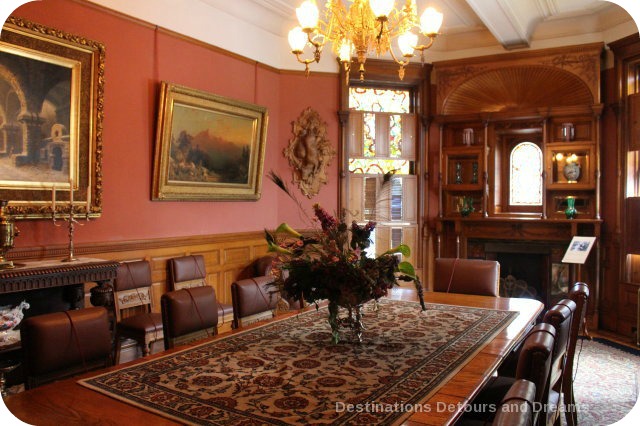 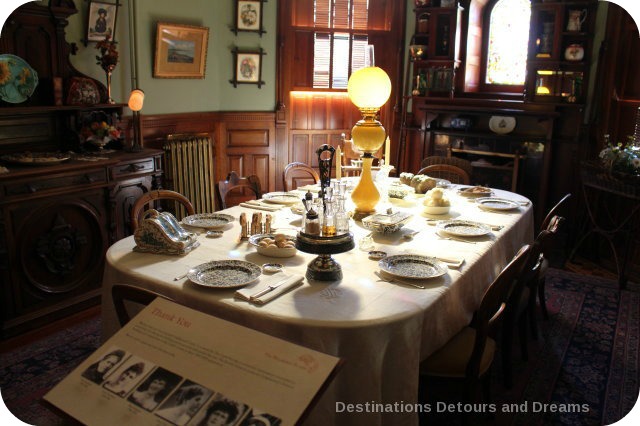 Displays in one room chronicle the lives of the Dunsmuirs and their eight daughters and two sons. The stories are fascinating and include a theatre career, gambling at Monte Carlo, life in London’s West End and family strife caused when Dunsmuir left his estate to his wife instead of his two sons as he’d once promised. 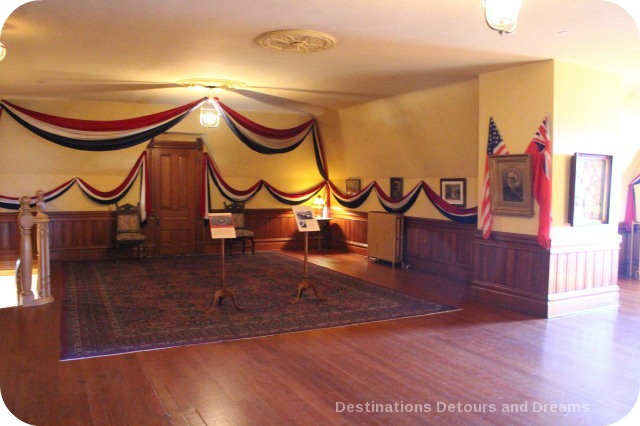 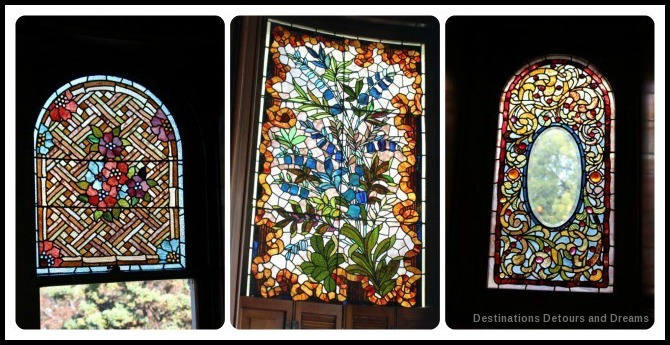 Craigdarroch Castle has one of North America’s finest collections of Victorian residential stained and leaded glass windows. All but one of the stained glass windows in the building are original. (A window in the drawing room depicting a woman and a swan is a reproduction.) 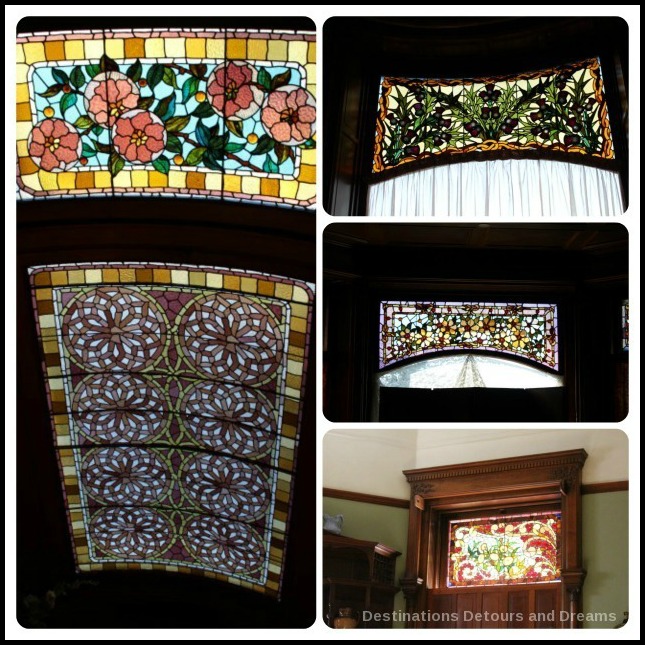 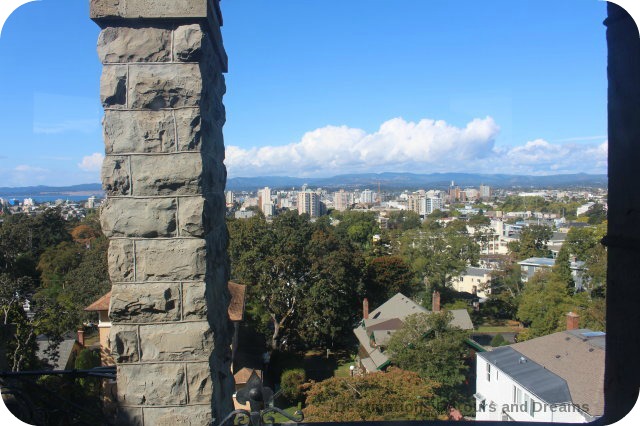 Craigdarroch Castle is open daily (with the exception of January 1, December 25 and December 26). The self-guided tour takes you through twenty-nine rooms in the Castle. 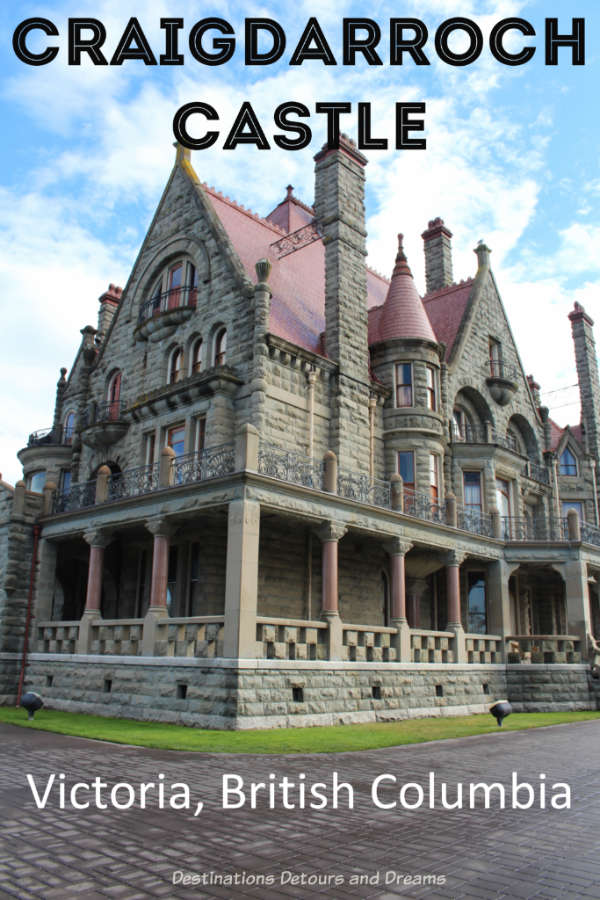