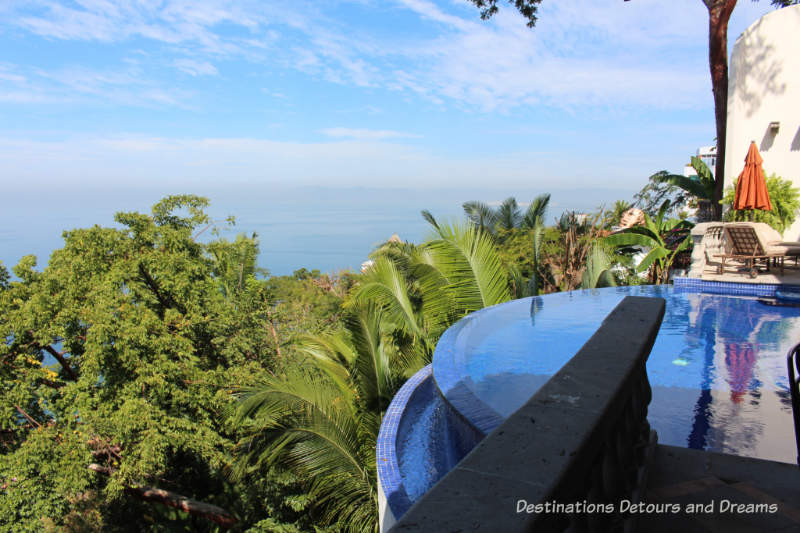 on the IFC Home Tour

As the bus wound its way up the cobblestone streets of Conchas Chinas, the affluent neighbourhood nicknamed “the Beverly Hills of Puerto Vallarta”, magnificent views of the Bay of Banderas greeted us on one side of the bus. The Sierra Madre Mountains framed our view on the other side.

Three of the four houses featured on this day’s International Friendship Club (IFC) home tour were in this area, just a few minutes south of Puerto Vallarta, Mexico. Although homes on the tour are sometimes for sale or available to rent, property shopping is not the purpose of IFC Home Tours. The tours simply provide an opportunity to see and marvel at unique and interesting homes. 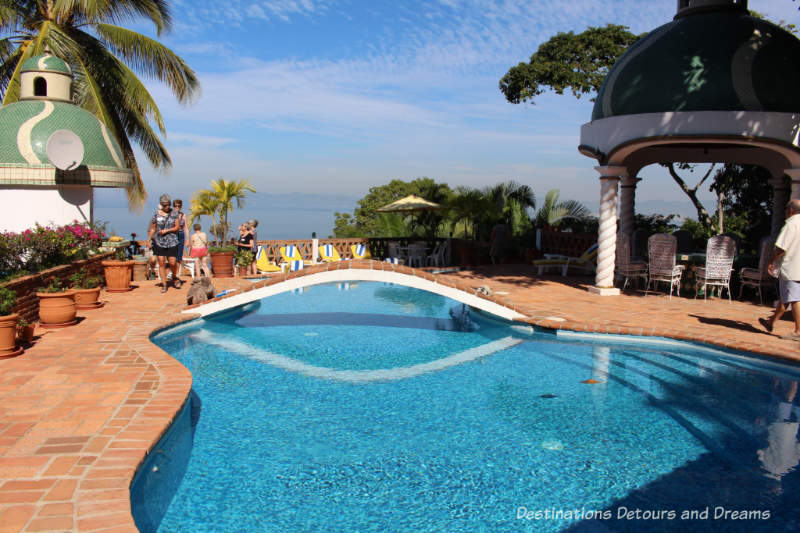 Different homes are featured each week on the tour. You can take the tour several times and likely not see the same home twice. Many of the people on the tour I was on had been on previous tours. The guide on our bus had led twenty-five tours so far this year and had only encountered one repeat home.

Conchas Chinas translates to “Chinese shells”.  Our guide didn’t know the origin of the name. According to Wikipedia, the name refers to the type of shells found on Conchas Chinas beaches. Unlike most of the homes in the area built on several levels, the first home on our tour was all on one level. Dating to the 1940s, it was the oldest home we would see. It had originally been three separate houses. 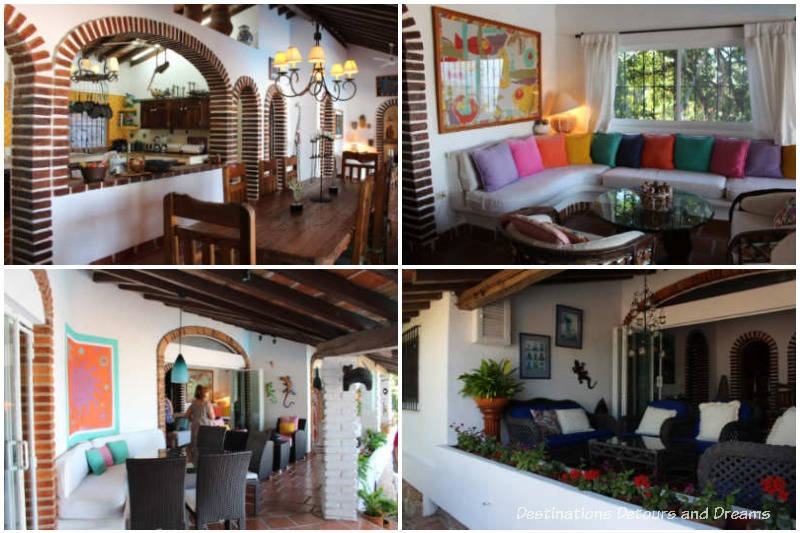 The other homes on the tour had all been built after the year 2000. All homes had four or five bedrooms, and more bathrooms than bedrooms. The last two, at 8,000 and 10,000 square feet respectively, were the largest. This first home was the smallest and my personal favourite. The bedrooms were small compared to those in the other homes, but there were many comfortable and inviting living spaces. 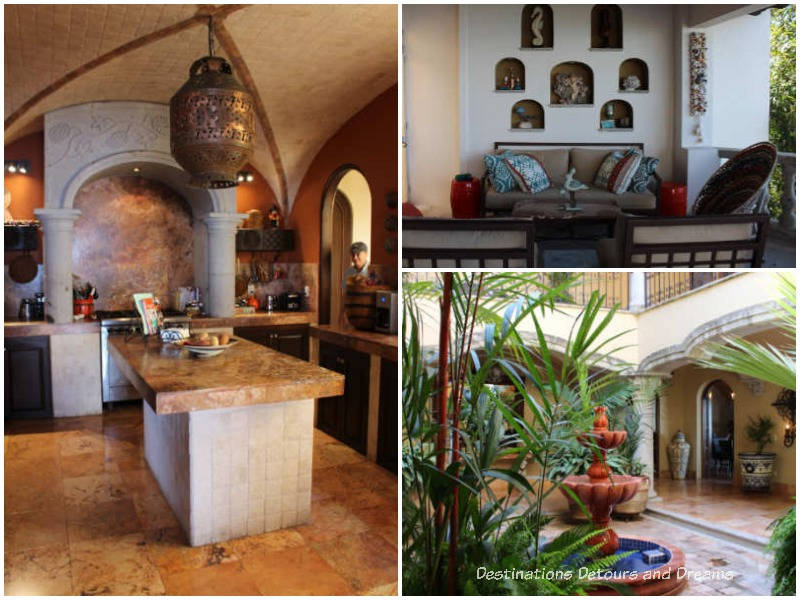 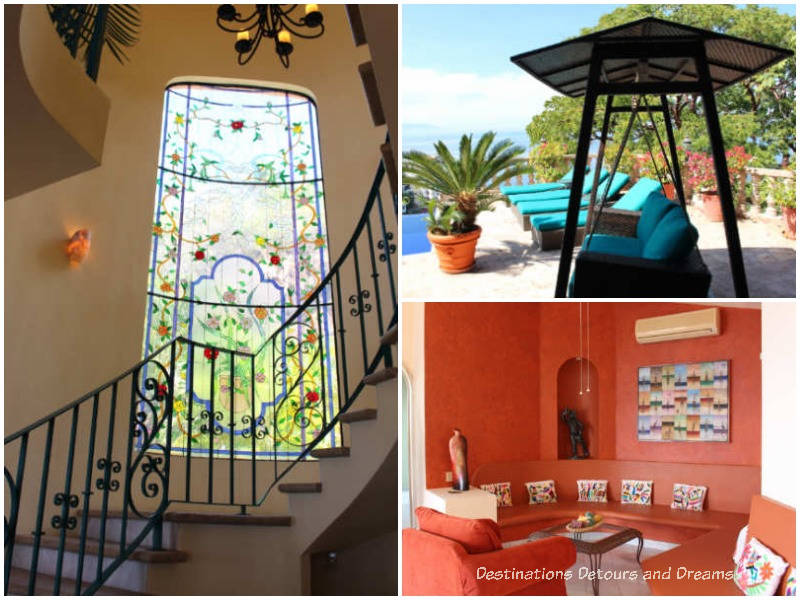 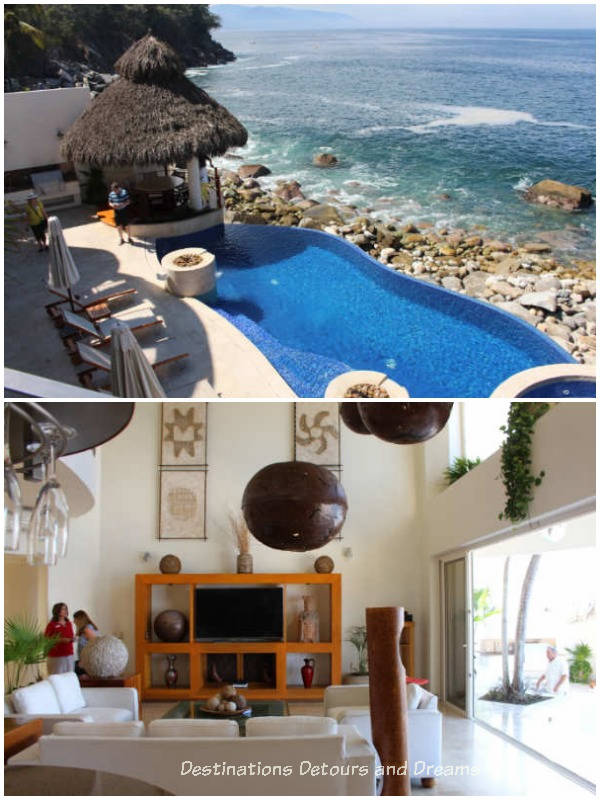 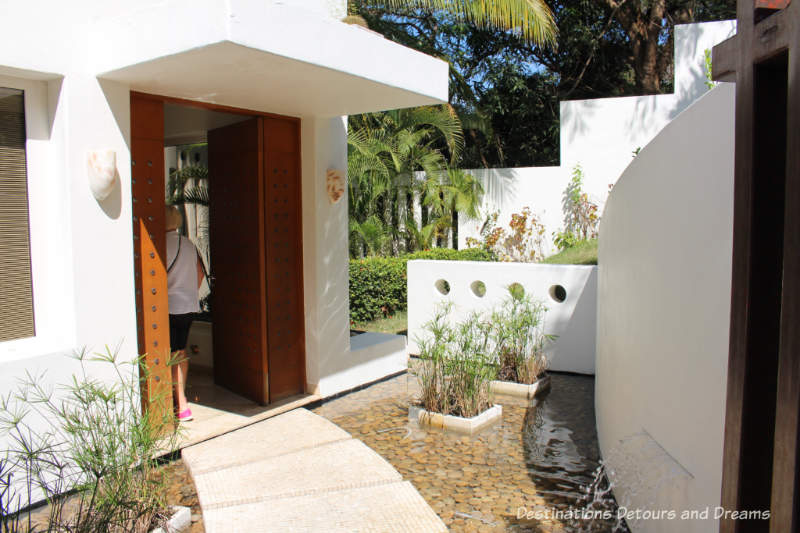 The oasis-like entry to house 4 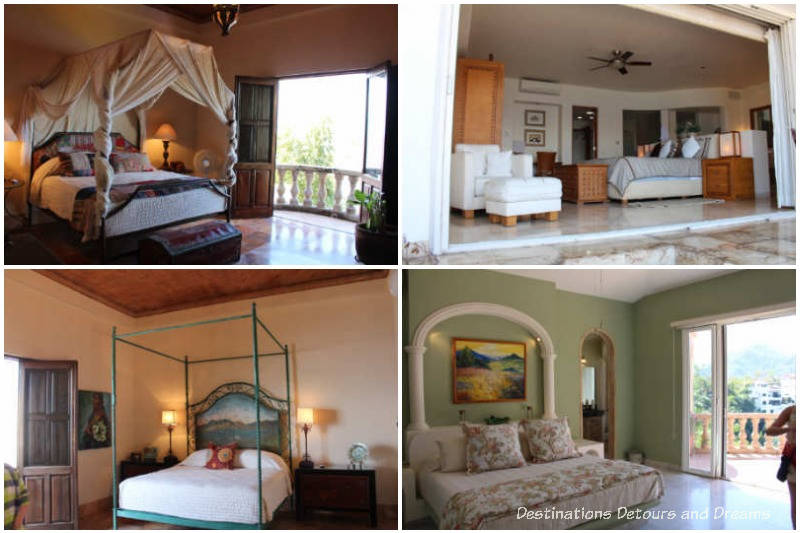 A sampling of the bedrooms from the four homes

Every house had spectacular views. 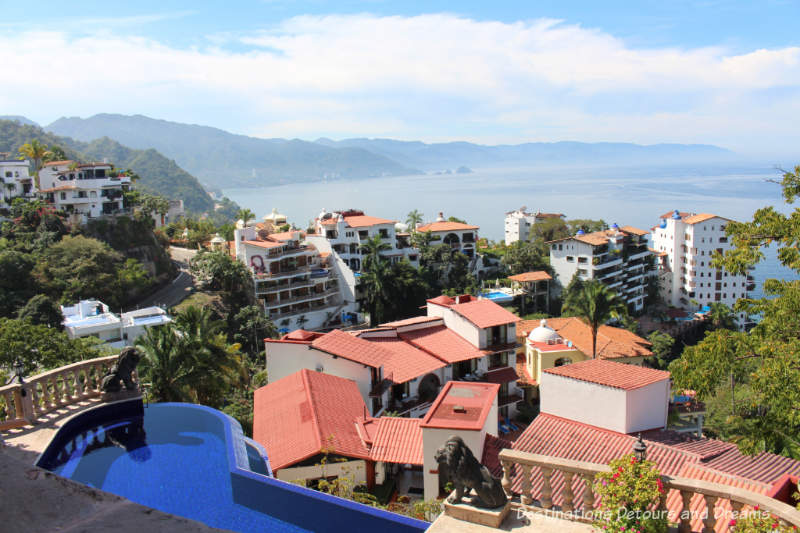 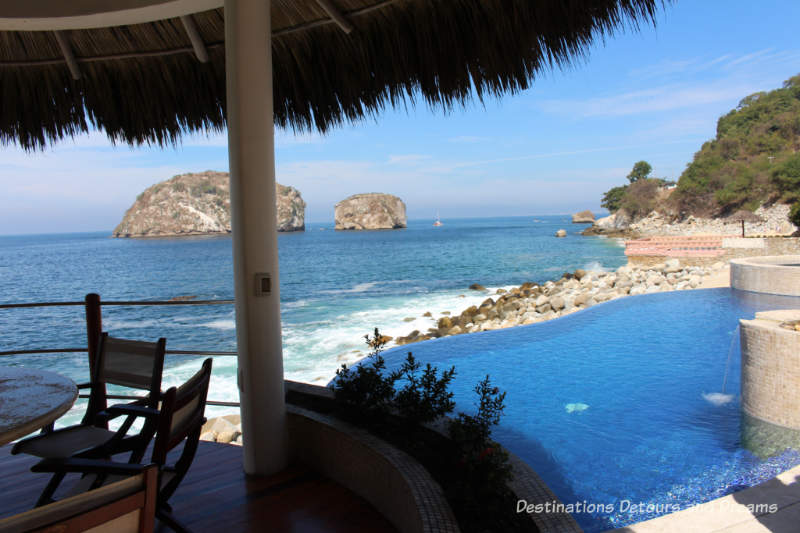 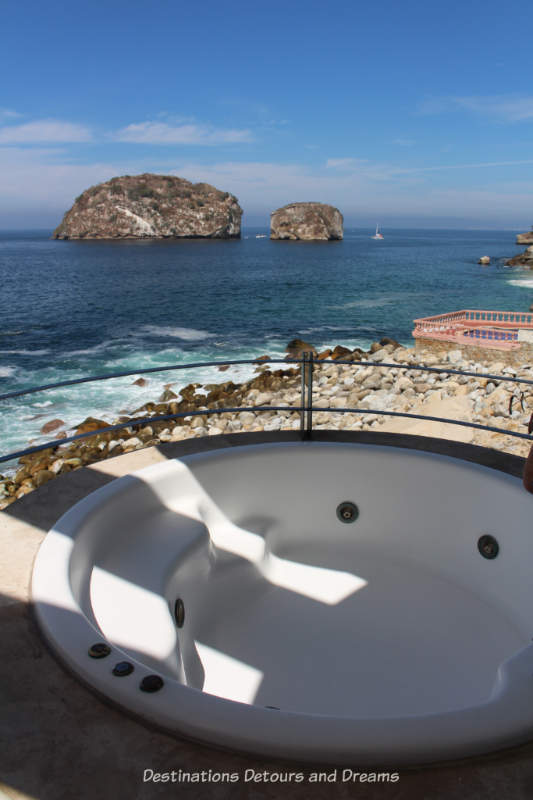 The International Friendship Club (IFC) began in 1985 with a handful of people from Canada and the United States meeting socially. Today it has over 600 members and is a registered charitable organization in Mexico serving the ex-pat community with educational seminars, speakers, Spanish lessons and a variety of social events. They support more than twenty charities: educational institutions, medical/dental services, orphanages, social service providers and their own Cleft Palate Surgery program. For unknown reasons, cleft palate and/or cleft lip birth abnormalities are prevalent in the area. The nearest hospitals equipped to do corrective and reconstructive surgery are in Guadalajara. Through the IFC’s Cleft Palate Programs doctors and nurses from Guadalajara travel to Puerto Vallarta four times a year to treat the cases. The doctors and nurses volunteer their time. IFC pays for their flights and accommodations. Local medical facilities provide space and follow-up. The Home Tour is the major fundraiser for the IFC.

The home tours run Tuesdays and Wednesdays from November to March. Buses drive participants from home to home. Be aware, however, that there may be steep and uneven driveways or walkways to navigate from where the bus parks. Houses are likely to have stairs.

I enjoyed seeing the homes on the tour and would gladly take the tour again on a future trip to Puerto Vallarta. 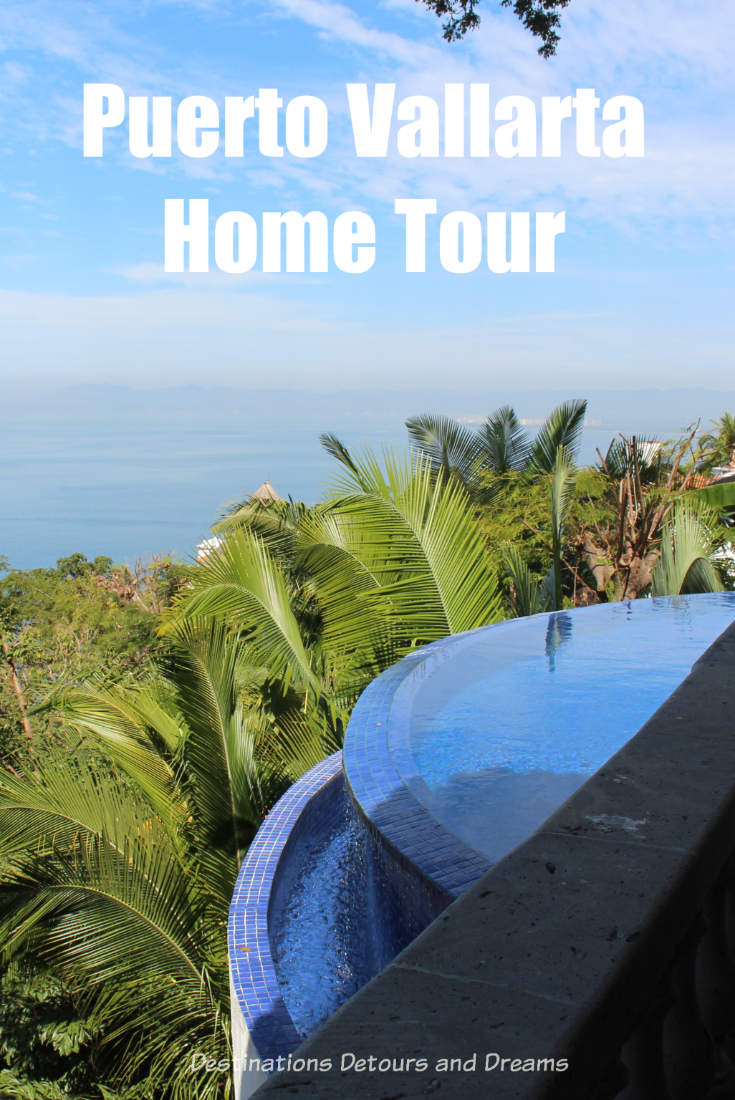 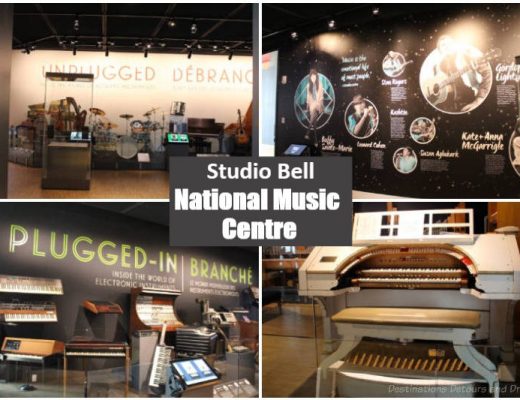