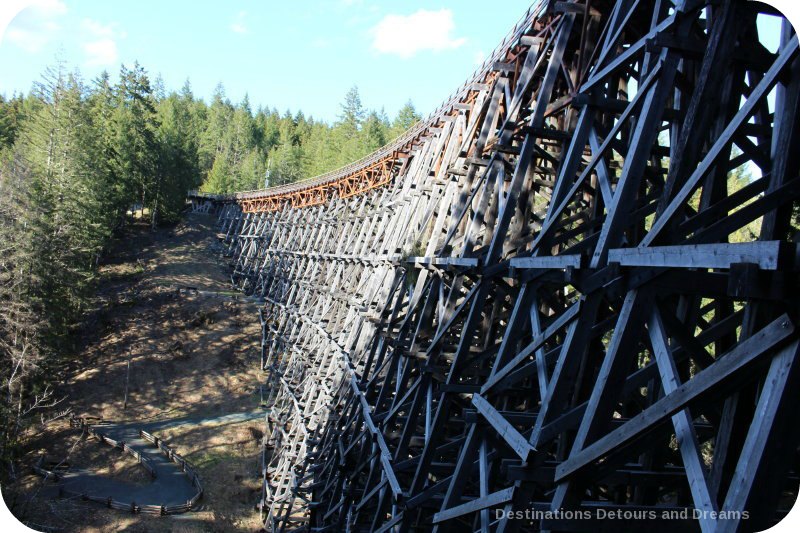 A spectacular and historic trestle bridge is now part

of the Cowichan Valley Trail on southern Vancouver Island

The Kinsol Testle Bridge was not originally on the agenda for our day trip from Victoria, British Columbia to the towns of Duncan and Chemainus in the Cowichan Valley. I didn’t even know about the bridge until someone mentioned it to my husband. We decided to visit if we could fit it into the day’s activities. I’m glad we did.

The Kinsol Trestle is one of eight trestles along the Cowichan Valley Trail, part of the Trans-Canada Trail. It is the largest and one of the tallest free-standing timber trestle structures in the world. It is 614 feet in length and stands 145 feet above the Koksilah River.

The Cowichan Valley Trail is a multi-use gravel trail on South Vancouver Island. It runs from the south end of Shawnigan Lake, west to the Town Of Shawnigan Lake, then north to the Nainamo Region District. The trail, just over 115 kilometres long, is mostly wide and flat, good for cycling and walking.

The Trans-Canada Trail, aka The Great Trail, is one of the world’s longest connection of trails. Initiated in 1992, it was developed and promoted by a non-profit, registered charity. Trail sections are owned and maintained by local organizations, provincial authorities, national agencies and municipal authorities across Canada. When complete, the trail will stretch nearly 24,000 kilometres from the Atlantic to Pacific to Arctic oceans. Today, over 18,000 kilometres of trail exist, offering opportunities to hike, cycle, ski, horseback ride, canoe and snowmobile. 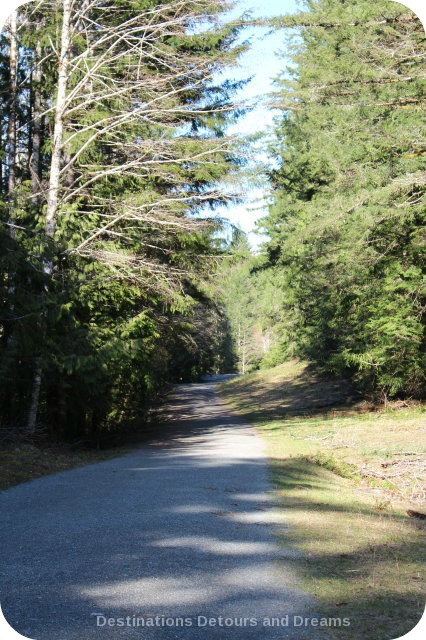 The Kinsol Trestle is located southwest of Duncan. The scenic drive to the bridge took us past Shawnigan Lake. The Bridge is a 1.2 pleasant kilometre walk from the parking lot, with some nice scenery along the way. 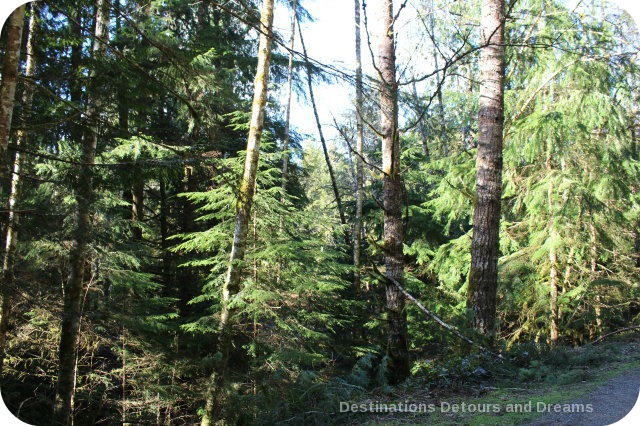 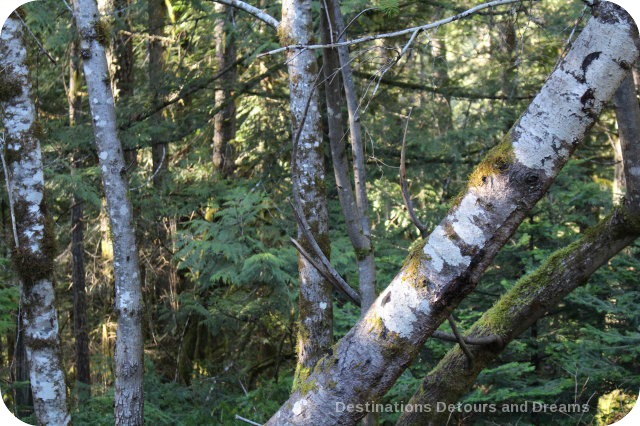 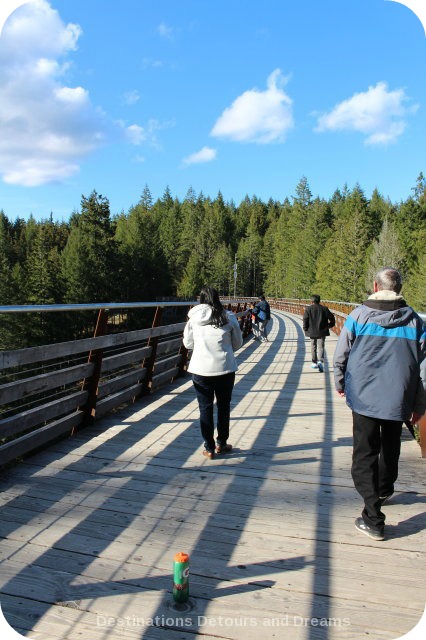 Walking on the Kinsol Trestle Bridge

Trestle bridges are a visible reminder of early mining and logging industries. Railways were built at the end of the 19th century to more easily move lumber and minerals. Construction of the Kinsol Bridge started in 1911 and completed in 1920. It was designed by engineers but built by local farmers.

The last train crossed the bridge in 1979. The condition of the bridge deteriorated and was not usable for walking or cycling. In 2011 to 2012 the bridge was rehabilitated and is now open to walkers and cyclists on the Cowichan Valley Trail. The engineers kept part of the original trestle work in place, a span of old wood just above the river. 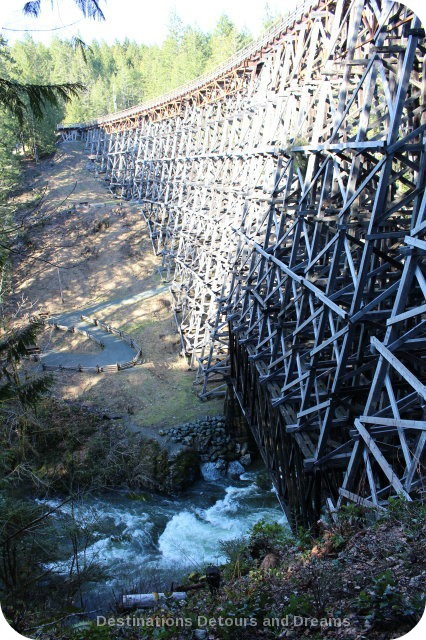 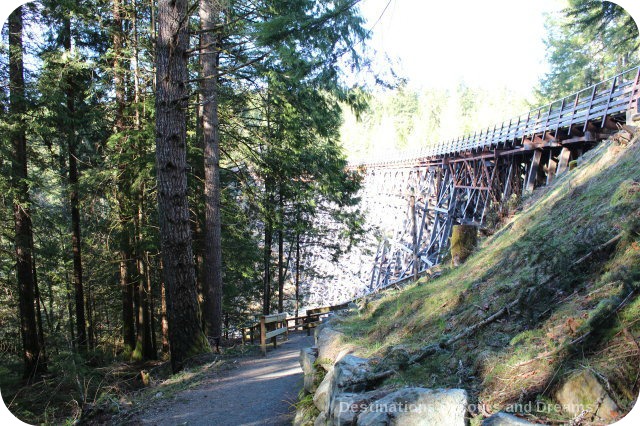 There is a walkway down to river level 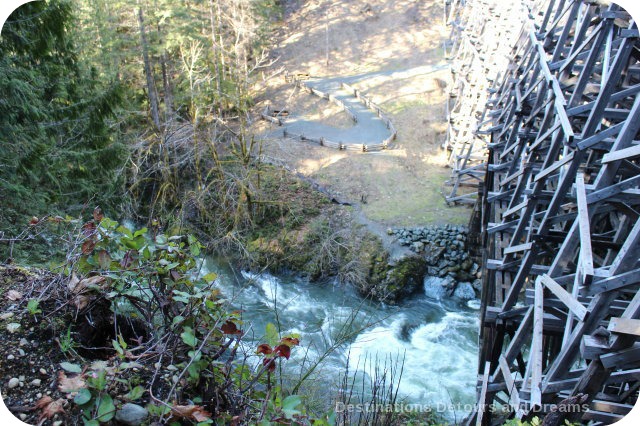 We visited in spring when the water was flowing quickly. A family we met on the bridge told us the water level is lower and the current slower in summer, when their children sometimes play on the rocks and in the water. 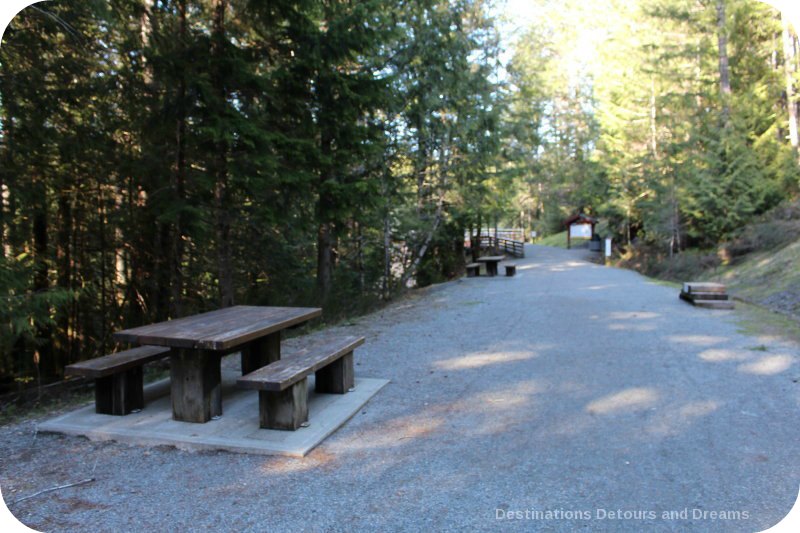 The Trestle Bridge is maintained by the Cowichan Valley Regional District (CVRD). There are benches and picnic tables at the site. The CVRD Kinsol Trestle Bridge site contains more information on the Bridge, including directions. 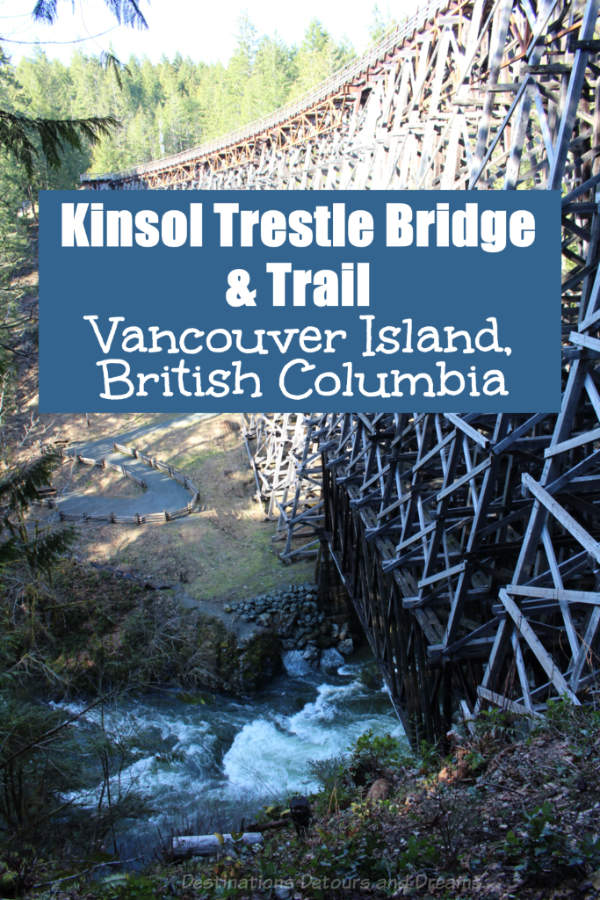