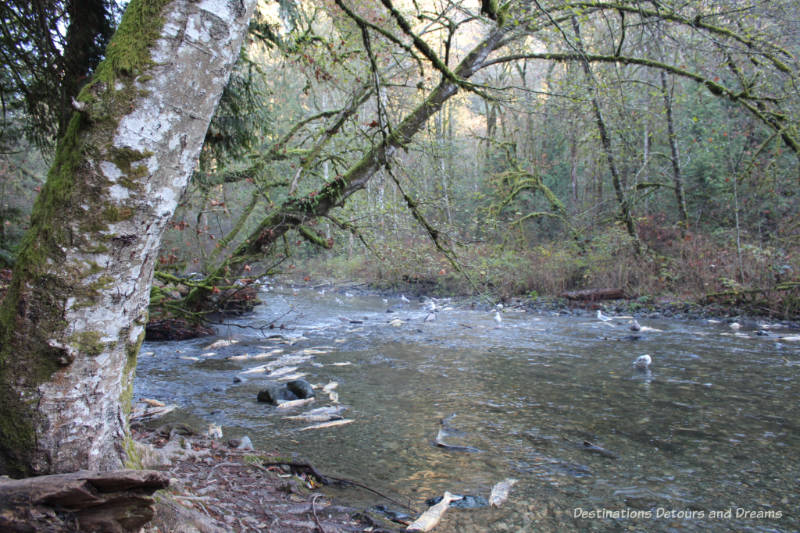 From mid-October to early December, Goldstream Provincial Park on Vancouver Island along Canada’s West Coast is host to one of nature’s most fascinating spectacles, the salmon run. Three species of Pacific salmon leave the ocean and return to the stream of their birth to spawn a new generation. I’ve read about it, but didn’t fully appreciate the wonder of this natural cycle until I saw it for myself. Chum salmon make up the largest number of fish coming into Goldstream River for salmon spawning season, but there are also Chinook and Coho salmon. 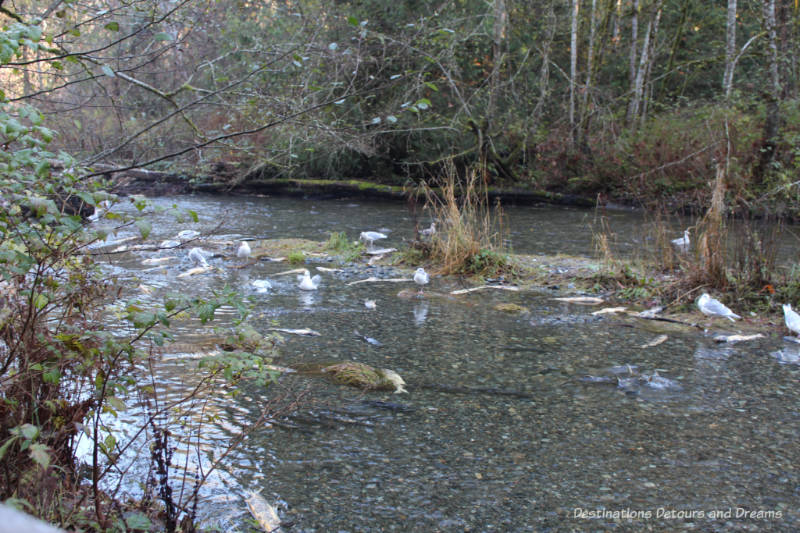 Female salmon select patches of gravel and are joined by males who fight to be near them. The female digs a redd (a series of nests) in the gravel by turning on her side and thrashing her tail along the sea bottom. This causes rocks to be lifted and carried downstream. The nest may be as deep as half a metre. She releases eggs that are simultaneously fertilized by milt from the male. Timing is key. Once the eggs swell and harden, they can no longer be fertilized. The female may then move upstream to dig a new nest. The excavation of that nest covers the eggs previously deposited downstream. Within approximately ten days of entering the stream, both males and females die.

When I visited, salmon carcasses sat along the shore and on gravel ridges in the river while live salmon swam and tunneled under the water. Birds squawked and feasted on the carcasses.

The Saanich people called this river “Selekta.” The salmon were a staple of the native diet. Today, as in the past, men gaff or spear the fish while women clean, fillet and smoke them over alder or maple fires. The current name of the river comes from unsuccessful gold strikes on the river. An 1863 newspaper report of gold brought about 300 men to its shores to pan for gold. Little gold was found and the miners turned to mining quartz outcroppings or rushed off to news of strikes elsewhere. Hopes were rekindled in 1897, but again little gold was found. 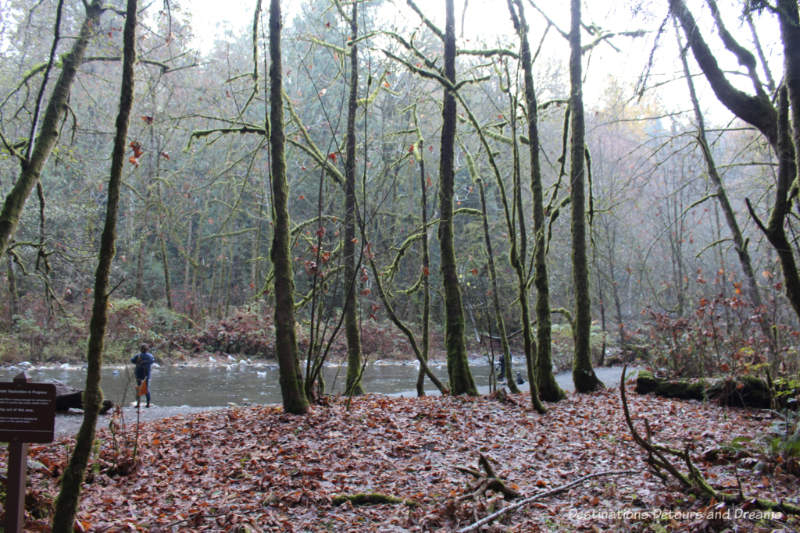 After the railway was completed in 1896, the area become a popular picnicking spot and special excursion trains ran on summer Sundays and holidays. Railway traffic declined after the highway was built in 1910, but recreational use continued. Goldstream Provincial Park was created in 1958. 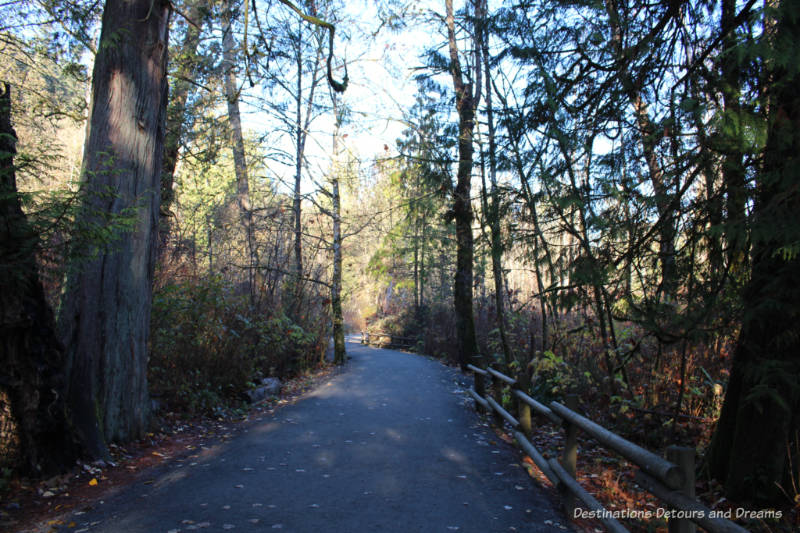 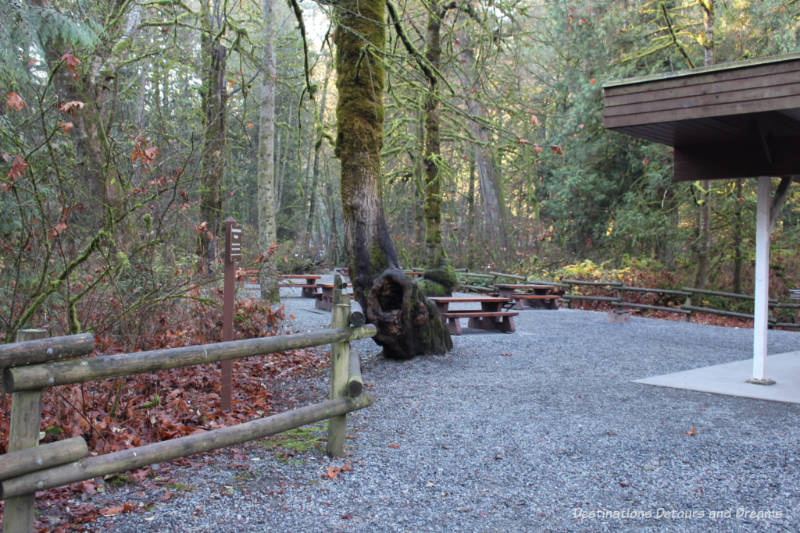 Part of the picnic area at Goldstream Provincial Park 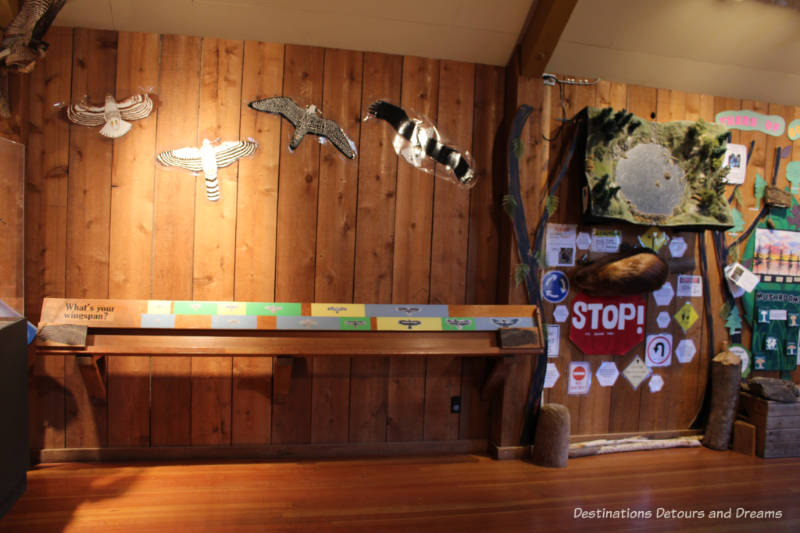 The Freeman King Visitor Centre contains a variety of interactive displays that are fun for children and adults alike to learn more about the salmon and other nature life in the park. The Centre hosts interpretive events and lectures. 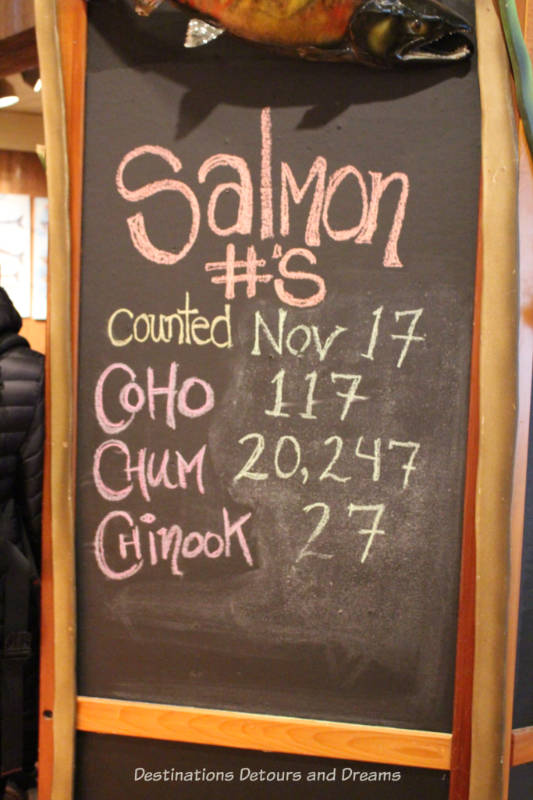 A board inside the centre displayed the latest salmon counts from the current season salmon run. Salmon are counted manually by volunteers using counters as they walk the trail. Live and dead salmon are counted separately so as not to double count. At the end of the season, the live and dead counts should balance each other. 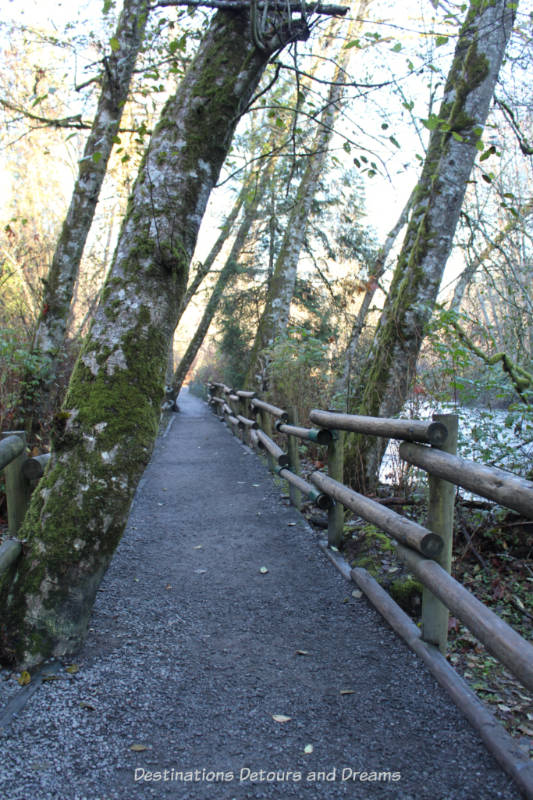 Riverside trails and observations platforms offer opportunity to view the salmon. Rivers are dynamic and change. Heavy rains that flood trails carry gravel and silt into the river, potentially destroying nesting habitats and suffocating eggs. The trail at Goldstream has washed out several times. The park is listening to what the river is saying about its natural course. Portions of the trail at the highest risk of flooding have been removed. Elsewhere, trails are carefully maintained to minimize ecological footprints. 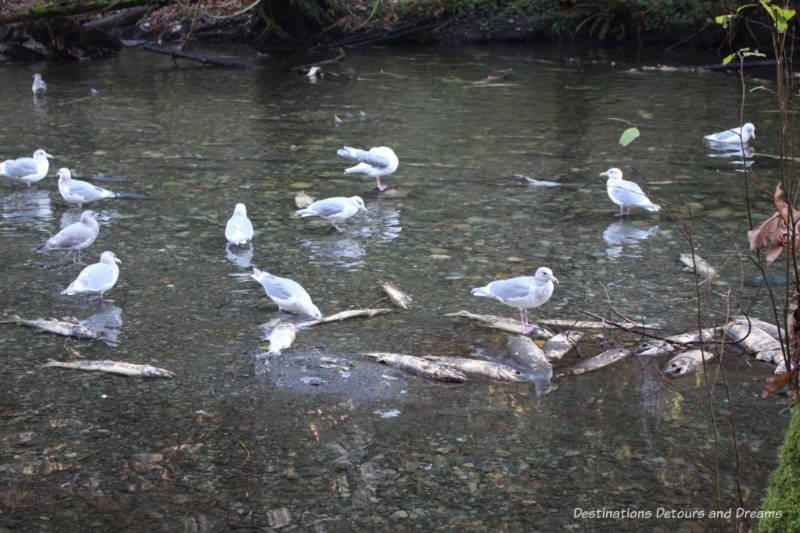 The dead salmon carcasses contribute to the ecosystem. They provide food for 137 species of bird, mammal and fish. Bears drag carcasses to eat in the woods where anything left of the carcasses decomposes and the nutrients go into the soil. Birds eat salmon along the shore and deposit nutrients further inland. Eagles fly off with carcasses, dropping bits along the way. I didn’t spot any eagles during my visit to Goldstream, but it is not uncommon to see them swoop down. 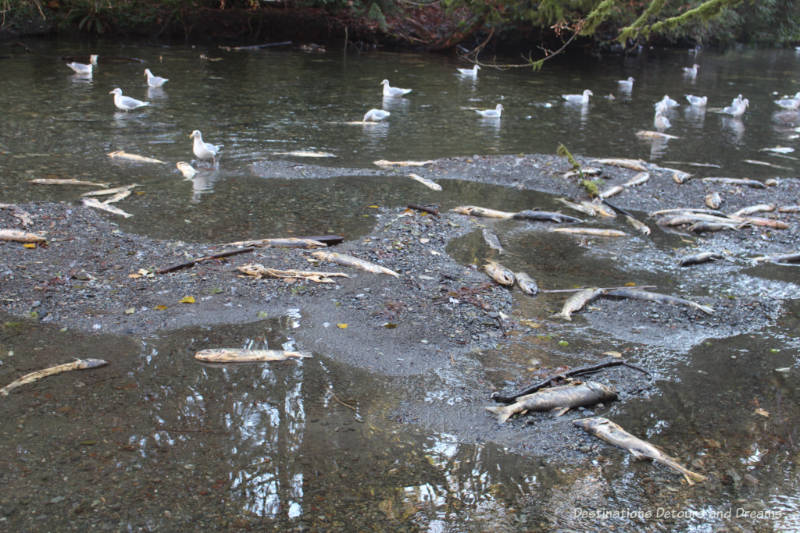 From a distance, the salmon carcasses on the rocks looks like pieces of driftwood

In February, the eggs begin to hatch to alevins, which remain protected beneath the river bed. By April, the alevins have absorbed their yolk sacs and become strong enough to wiggle up between the rocks. After a few days, the chum salmon head out to sea. Coho linger longer in the river staying for a year.

Pantomime: No You Shouldn't, Yes I Should