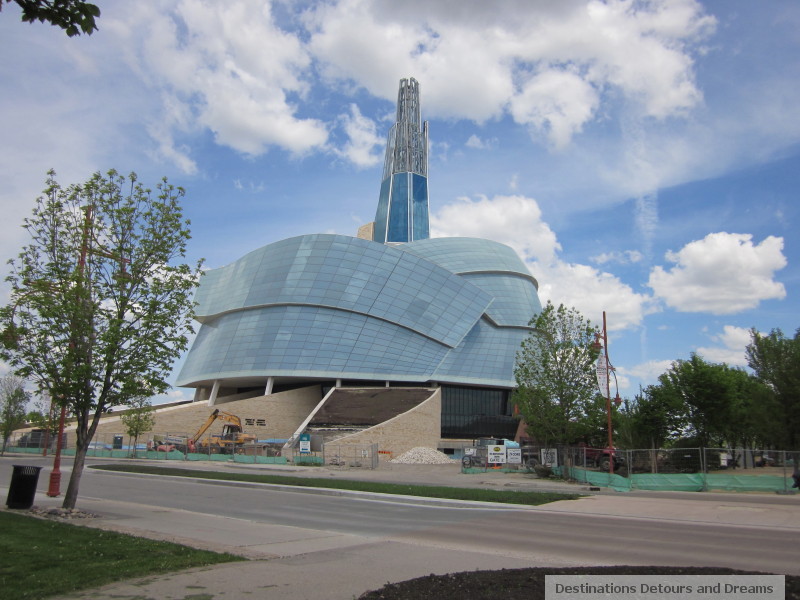 2013 outdoor tour of the Canadian Museum for Human Rights in Winnipeg,Manitoba

Note: This tour no longer exists. It was offered the year before the museum officially opened. But the information in the tour remains good background to the setting of the Canadian Museum for Human Rights and Winnipeg’s human rights stories.

What one word would you use to describe what human rights are? With this question, guides Brigitte Savard and Javier Torres begin the Canadian Museum for Human Rights “Rights Around Us” tour. The museum, located in Winnipeg, Manitoba, is not scheduled to open until sometime in 2014, exact date yet to be determined, but programming has already begun with  free 2013 summer outdoor tours.

“Everywhere you look there is a human rights story,” says the tour description. The tour focuses on human rights history in the area around the museum while also providing information about the museum. 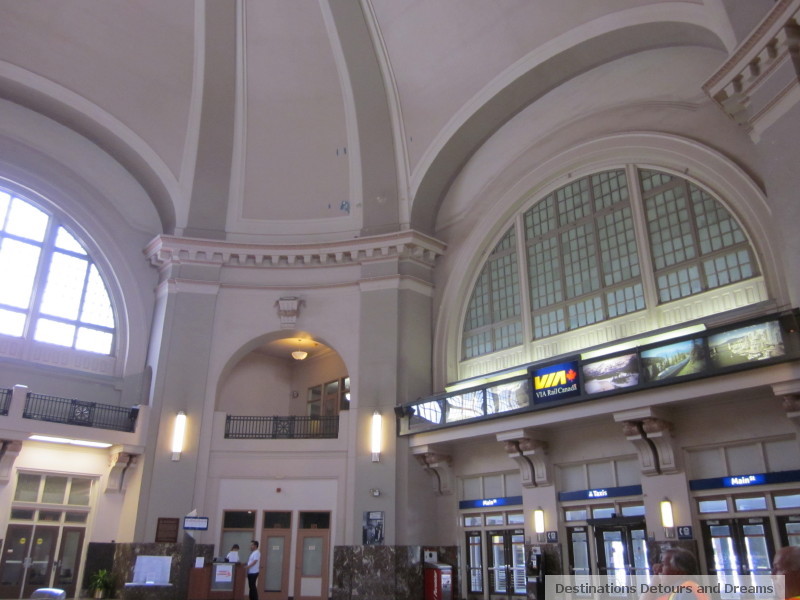 The tour starts in the lobby of Union Station on Main Street, now Winnipeg’s Via Rail Station. This heritage-designated building was designed by Warren and Whetmore, the same architects who designed Grand Central Terminal in New York City, and was constructed between 1908 and 1911.

The station has been a witness to struggles for labour rights and immigration rights. In the 1919 Winnipeg General Strike, people marched past the station as they turned from Broadway Avenue onto Main Street toward City Hall. Thousands of immigrants passed through its halls in the early 1900s.

We exit Union Station and proceed through The Forks. The Forks, where the Red and Assiniboine Rivers meet, has been a meeting place for 6,000 years. The museum stands at the north end of The Forks and, when landscaping is completed, will flow seamlessly into other areas of The Forks. Because of this area’s significance as an aboriginal meeting place, it is an appropriate spot for the tour guides to talk about treaty rights. 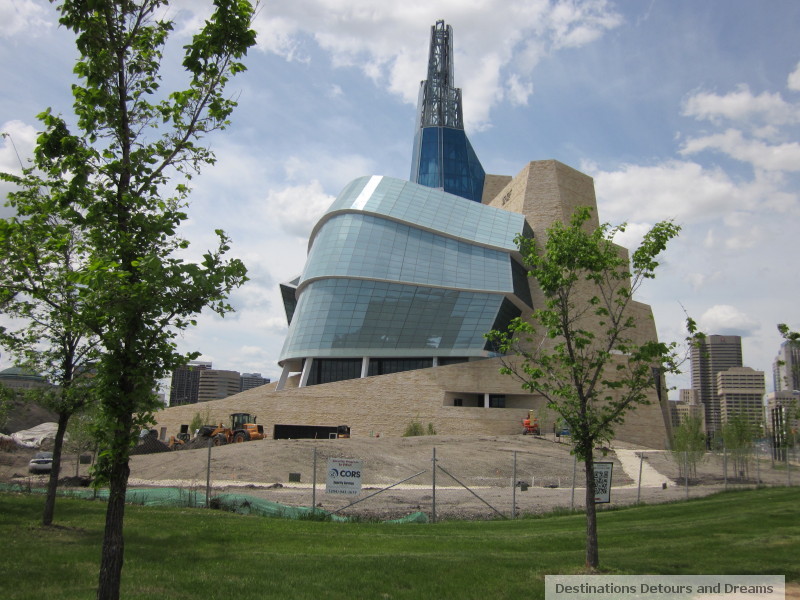 East side of Canadian Museum for Human Rights

From the east end of the museum, we have a view of downtown Winnipeg and the historic Exchange District. At this point, the guides talk about the struggle for women’s rights in Manitoba. In 1914, at the Walker Theatre, now known as the Burton Cummings Theatre, suffragist Nellie McClung played the premier in a mock Women’s Parliament meeting to discuss granting men the vote.

In 1916, Manitoba become the first Canadian province to allow women to vote provincially. In 1918, women were allowed to vote federally. However, that right was not universal. First Nations peoples were not granted the right to vote until 1960. 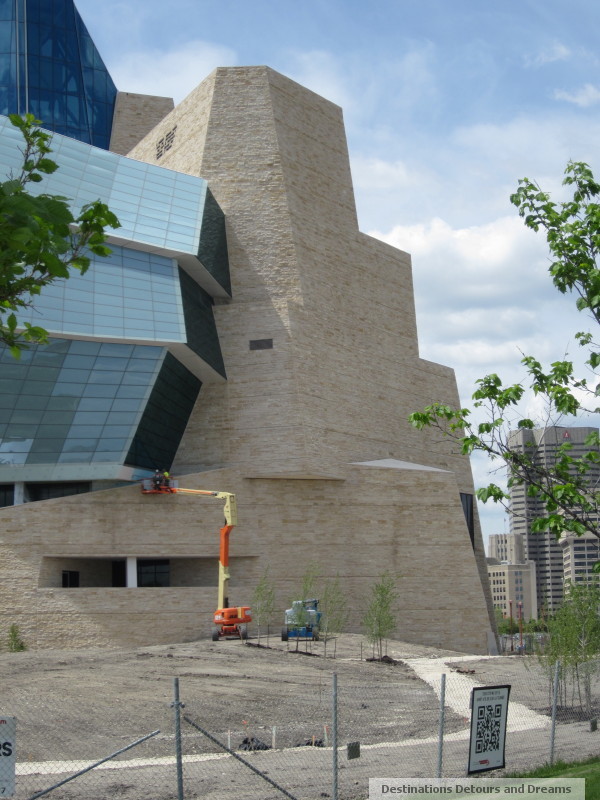 The Tyndall stone covered north section of the museum is called the “mountain”.
It provides protection from the north wind. Here is where the galleries will be housed. 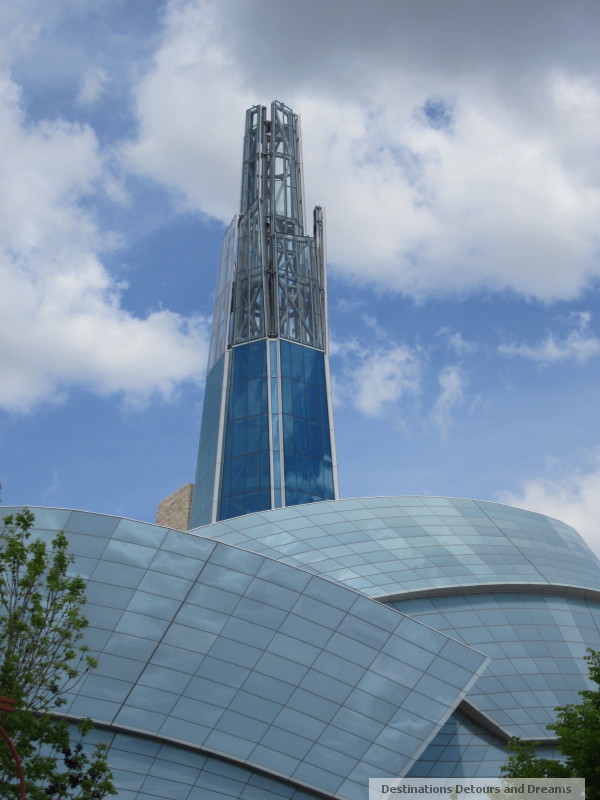 None of the 1500 light blue panes of glass on the “cloud” are the same, because of the curvature of the building. The cloud resembles the wings of a dove. The “Tower of Hope” protrudes upwards from the cloud. At a point in the tower, just below where the dark blue glass ends, visitors will be able to look out across the horizon. 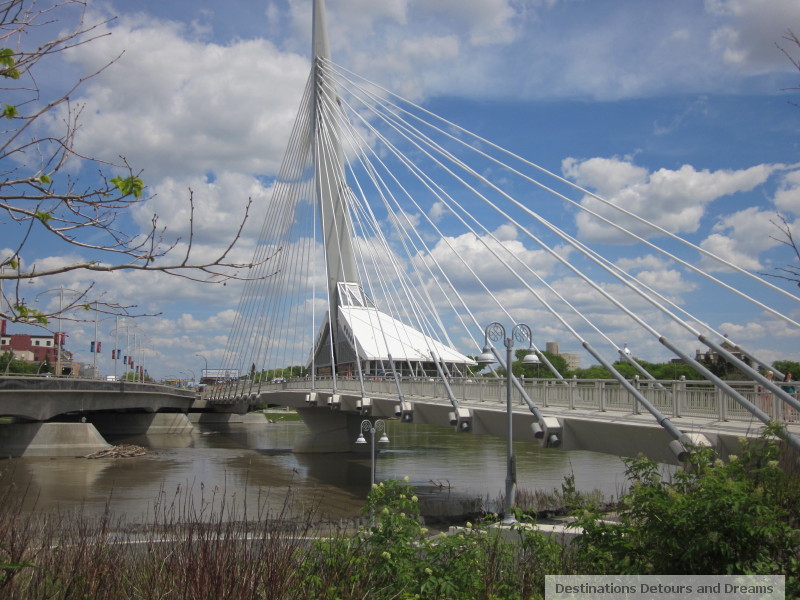 Across the Provencher Bridge, on the east side of the Red River, we see St. Boniface, Winnipeg’s French quarter, and the guides now talk about the struggle for French language rights in Manitoba.

The museum is an ideas museums, designed to make one think and to encourage dialogue. The journey through the galleries will mirror the human rights struggle, walking up ramps from gallery to gallery, the lower galleries darkened to reflect the grimness of the struggles. As you progress higher through the museum, more light comes in, signifying hope and the journey from darkness to enlightenment. The museum has been designed to have a high degree of accessibility. Elevators can be used to progress through the galleries. 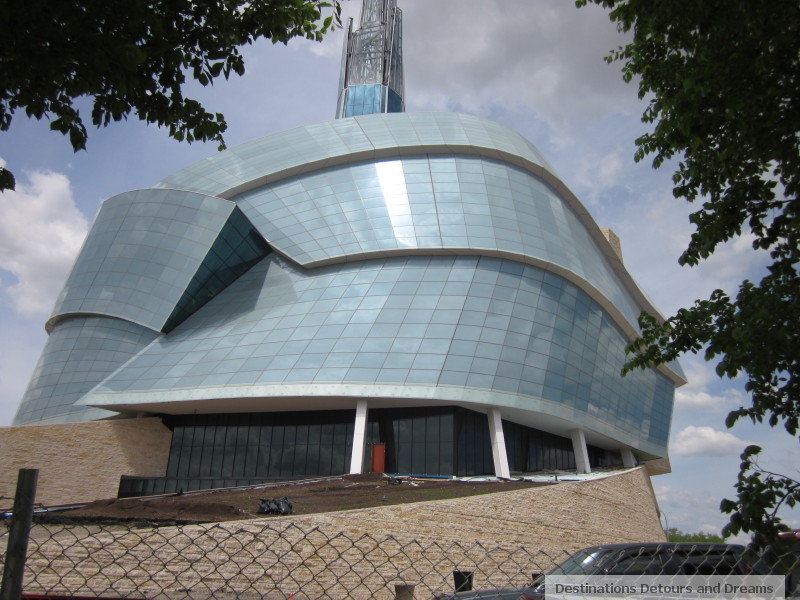 The roofs of three of the four “roots” extending out at the base of the Canadian Museum for Human Rights will be covered in prairie grass.

Half of the museum exhibits will focus on Canadian human rights, the other half on international rights. The museum will also house a restaurant, space for visiting exhibitions, a theatre, and classrooms. Tour guide Brigitte thinks one will need 2 days to take it all in. 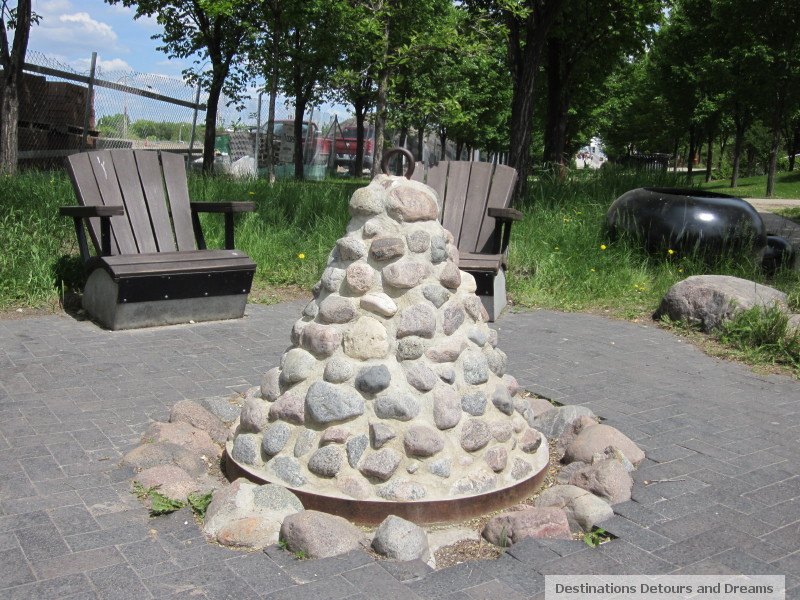 Stone fire pit at The Forks, near the main entrance of the Canadian Museum for Human Rights

During construction, builders unearthed 191 native firepits. The Forks site is one of the richest in Manitoba for aboriginal artifacts. Although the Canadian Museum for Human Rights funded an archaeological excavation in 2008 prior to building, it has been a controversial issue with some claiming the excavation didn’t go far enough. 500,000 artifacts were recovered in the excavation with an additional 80,000 – 90,000 artifacts recovered in the following two years.

Back at Union Station, a poster board on a table beside the tour booth holds people’s wishes for a better world. On a piece of paper that starts out I imagine, you write down what kind of world you would like to see. Here are a few of the wishes I found taped to the board.

I imagine a world where we value and respect each other’s diversity.

I imagine a peaceful world where we just love and care for each other.

I imagine equal opportunity for all.

I imagine a world with everyone waking up without worrying for their safety. 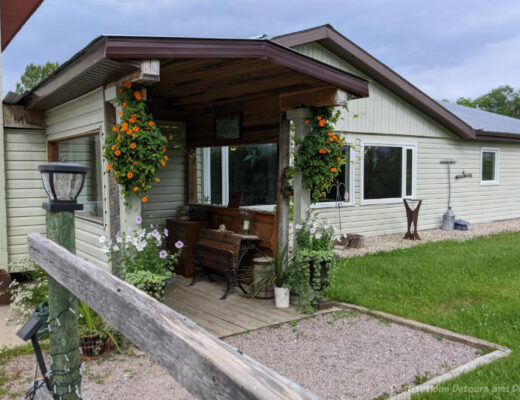 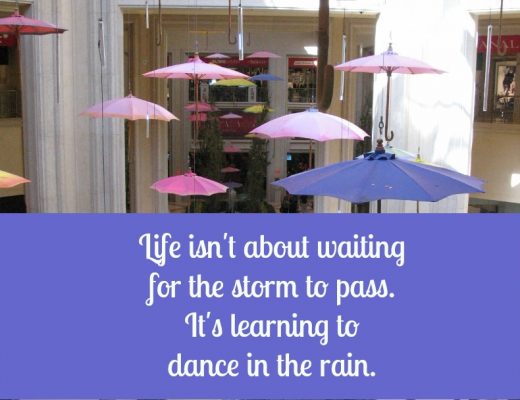