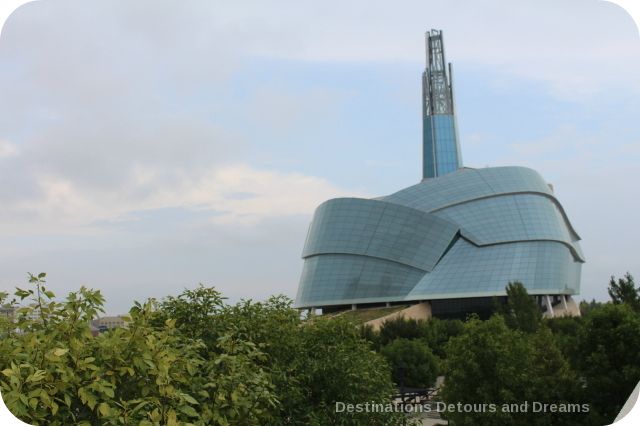 Architecture and exhibits combine to foster reflection and discussion,

to inspire hope and action

The newest tourist attraction in Winnipeg, Manitoba and a spectacular addition to its skyline is the Canadian Museum for Human Rights. I first visited the museum shortly after it opened in September 2014. I wrote about that visit, but at the time only half of the 11 galleries were open, with the remaining galleries slated to open a few weeks later. The museum has been attracting visitors for almost a year now and I returned to visit all the galleries.

The museum is dedicated to the evolution, celebration, and future of human rights. The design of the building, by architect Antoine Predock, is part of the overall experience and symbolizes the idea of an upward struggle for human rights, a journey of hope. 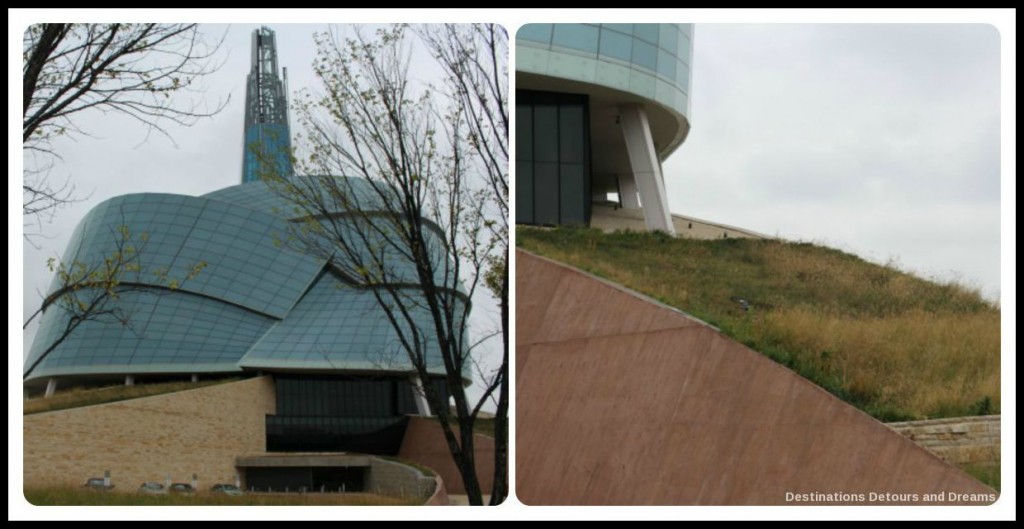 The four foundations or “roots”, three of which have prairie grasses growing on them, provide the connection to the earth. The walls of the “mountain” are made of prairie Tyndall stone. Fifteen hundred light blue panels of glass, no two exactly the same shape, on the “cloud” resemble the wings of a dove. The “Tower of Hope” projects upward from the cloud. The tower is illuminated at night as a symbol of enlightenment. 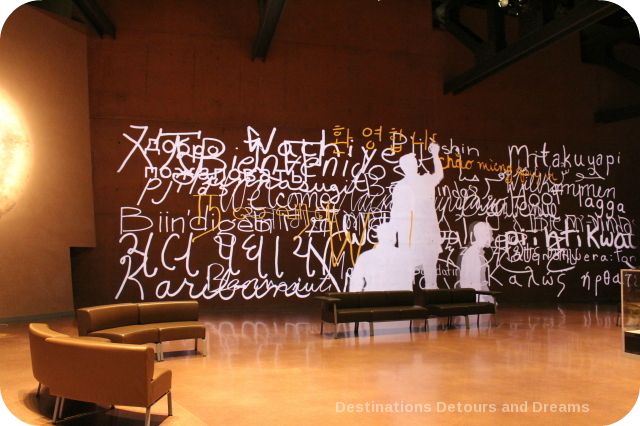 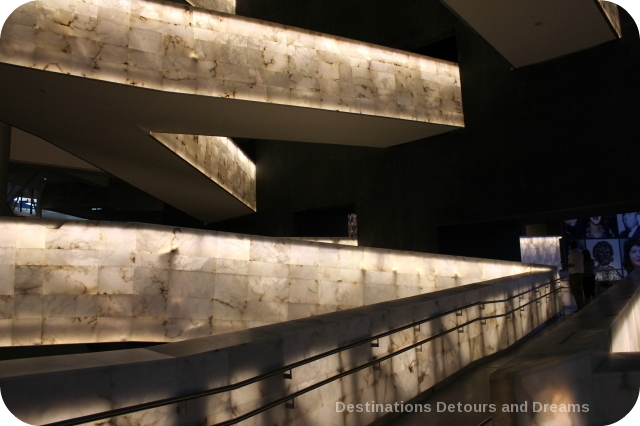 Inside the museum, ramps, lined in Spanish alabaster lit from the inside with LED lights, lead one upward through the galleries, symbolic of a journey of light through darkness. 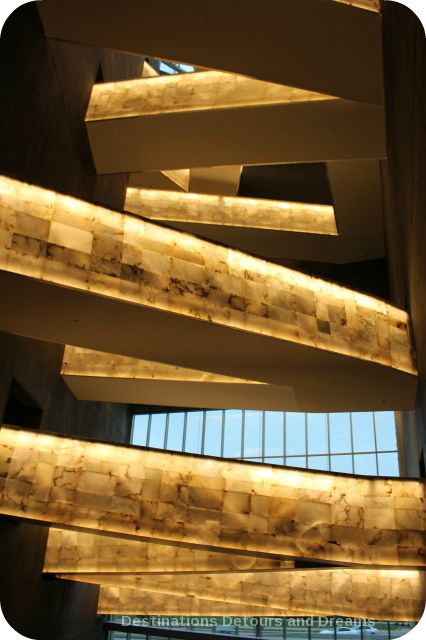 The galleries use multi-sensory exhibits to engage people in discussion and encourage commitment to action against hate and oppression: textual information on panels, films, changing projections of images and texts on walls, interactive video recordings, and visual displays. You will also find inspiring quotes on walls throughout the museum. 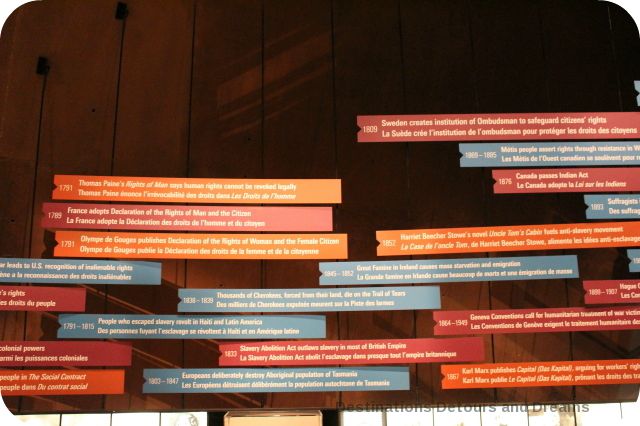 The first gallery is What are Human Rights?, a question people have grappled with throughout time. A timeline of selected moments in human rights history is presented. Indigenous Perspectives focuses on First Nations, Métis, and Inuit peoples’ concepts of rights and responsibilities. A film shown in a circular theatre shares indigenous stories told across four generations. The 360-degree view of stunning scenery, wildlife, and narrators pulls the viewer into the middle of the film. 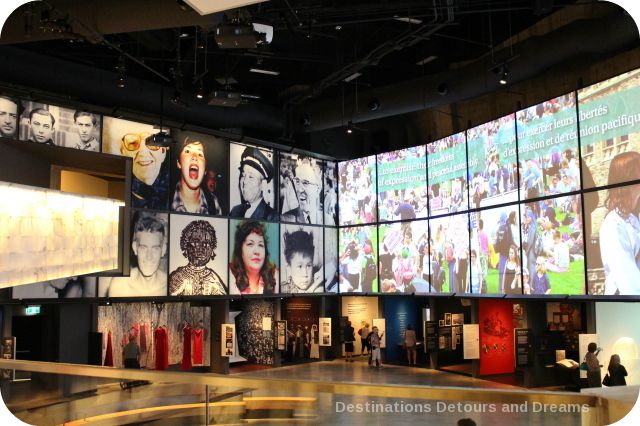 I found the Canadian Journeys gallery particularly interesting. The gallery focuses on the steps and missteps along the road to greater rights for everyone in Canada. I was familiar with some of the stories highlighted here: the plight of Chinese immigrants who helped build the railways, the underground railroad – the secret network which helped people escape from slavery in the United States to Canada, the internment of Japanese in World War II, language struggles, and women fighting for the right to vote. But I learned more about these stories and discovered new stories I’d been unaware of. In 1917, in order to ensure support for the war effort, the government stripped votes from certain groups, such as pacifist Mennonites. Such interference is illegal today. In 1916, a group of Francophone women armed with hatpins (those old hatpins look deadly!) occupied a school in Ottawa to protest Ontario’s English-only laws. Viola Desmond was a black Nova Scotian businesswoman who challenged racial segregation. Her fight started when she took a seat on the main floor of a film theatre in Glasgow, Nova Scotia, unaware the floor was reserved for whites. Although segregation was never enshrined in Canadian law, this story is a reminder that segregation existed in more informal ways.

Because I have read and heard quite a bit about the residential school system over the past few years, I expected to pass over that exhibit quickly with little impact. But a ten-minute film, in which survivors recounted their stories, moved me to tears. The government-sponsored religious-based schools were first created in the 1880s to assimilate aboriginal children into European-Canadian culture. Children were taken from their communities and placed into boarding schools. They were forbidden to speak their language or practice their culture. In many cases, abuse occurred. The last of the schools operated into the 1960s. In 2005, after lengthy litigation, the Canadian govenment established a compensation package for survivors and in 2008 issued a formal apology. 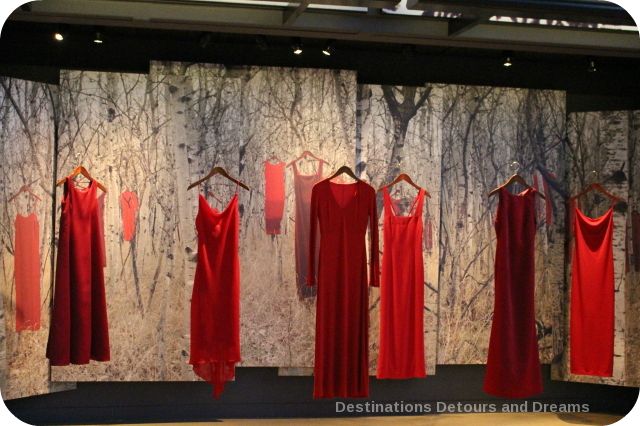 A booth at the end of the Canadian Journeys gallery offers visitors a chance to record and share their own stories. Protecting Rights in Canada focuses on the evolution of the Canadian legal system to protect human rights. 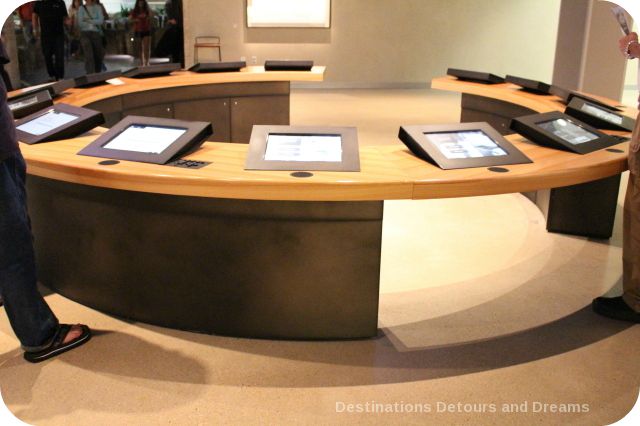 Interactive screens for visitors to vote on human rights legal issues.
(Euthanasia was the topic when I visited) 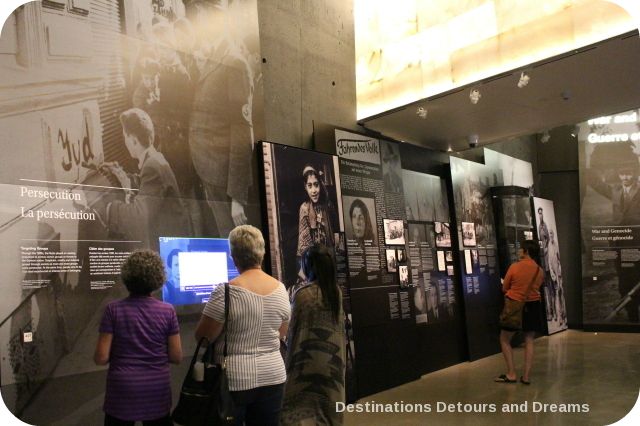 The galleries beyond Examining the Holocaust move one more into light and hope. Breaking the Silence is about daring to speak out against atrocities. Actions Count highlights Canadians making a difference. 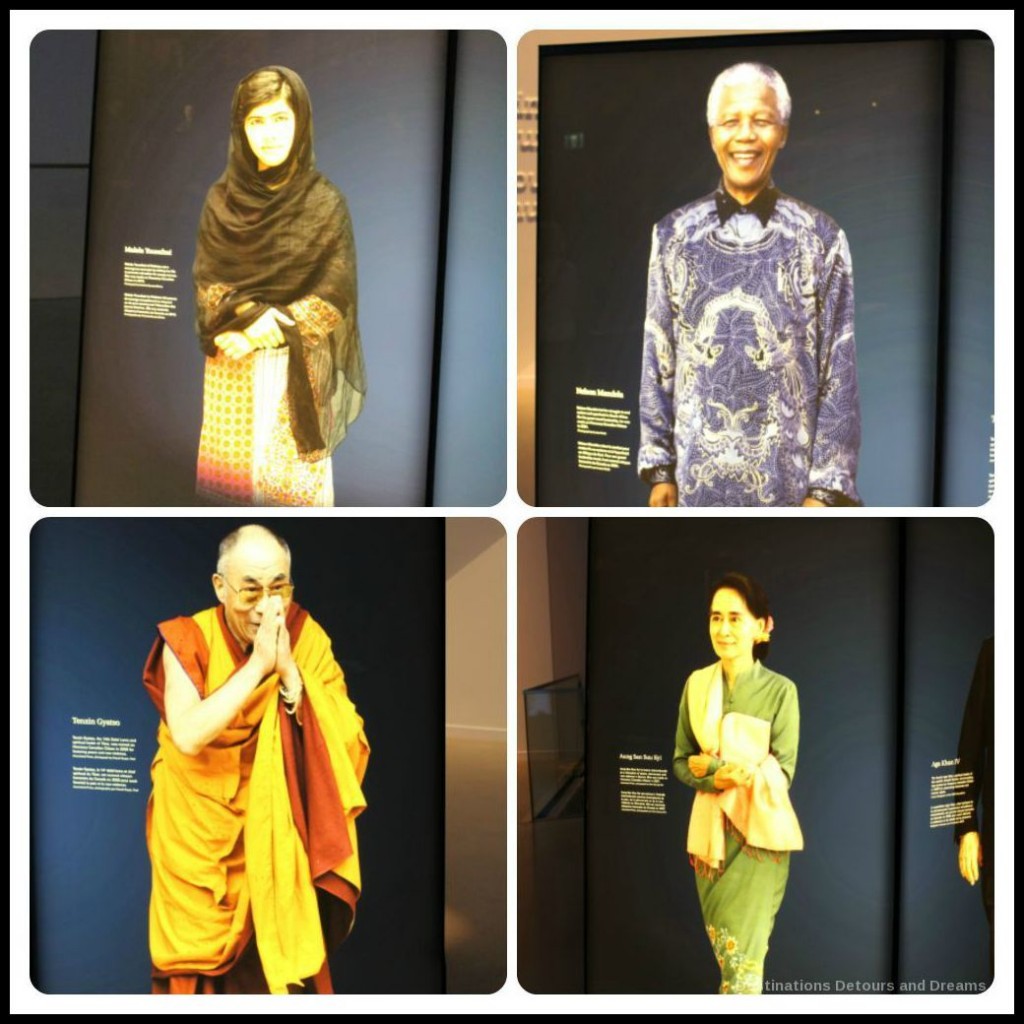 Rights Today encourages us to think about our role in contemporary human rights. Expressions contains a travelling exhibit from the Canadian War Museum about peace. Inspiring Change contains exhibits of triumph and offers visitors a chance to share their thoughts on human rights. 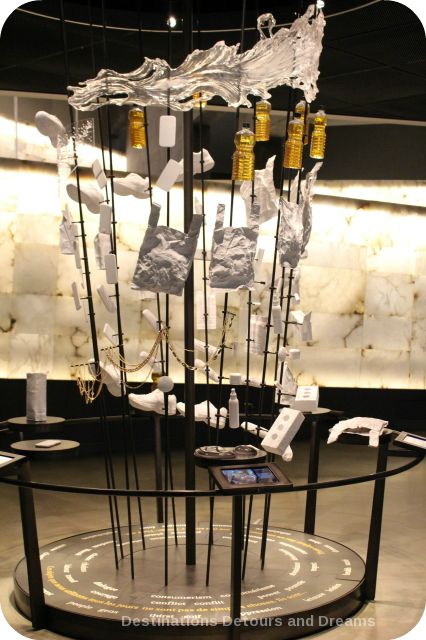 For an overview of the other galleries read my post Inside Human Rights.

The design of the building contributes to the overall experience. I felt it in my first visit and I felt it again this time. There is a calm, restful atmosphere that fosters reflection. Read more about the museum’s architecture and its meaning in my post Human Rights Museum. 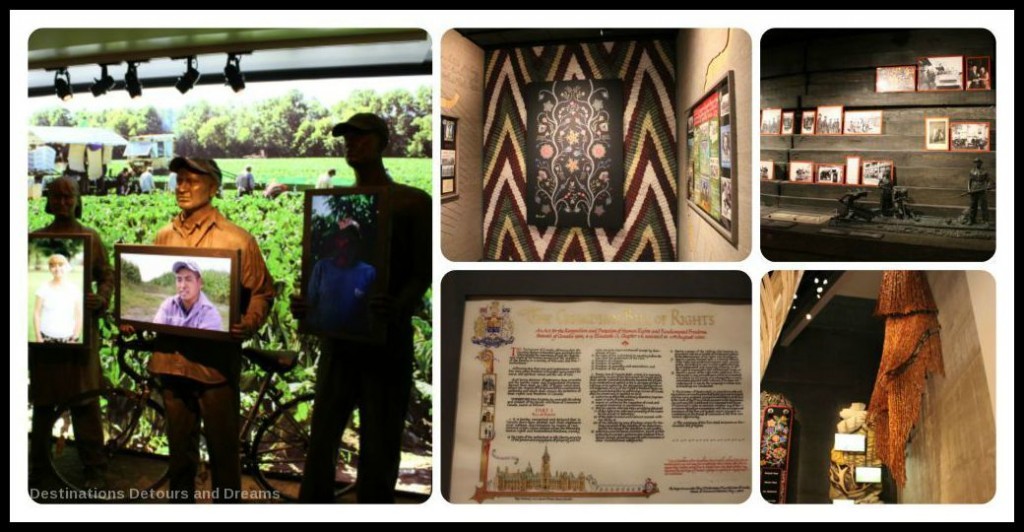 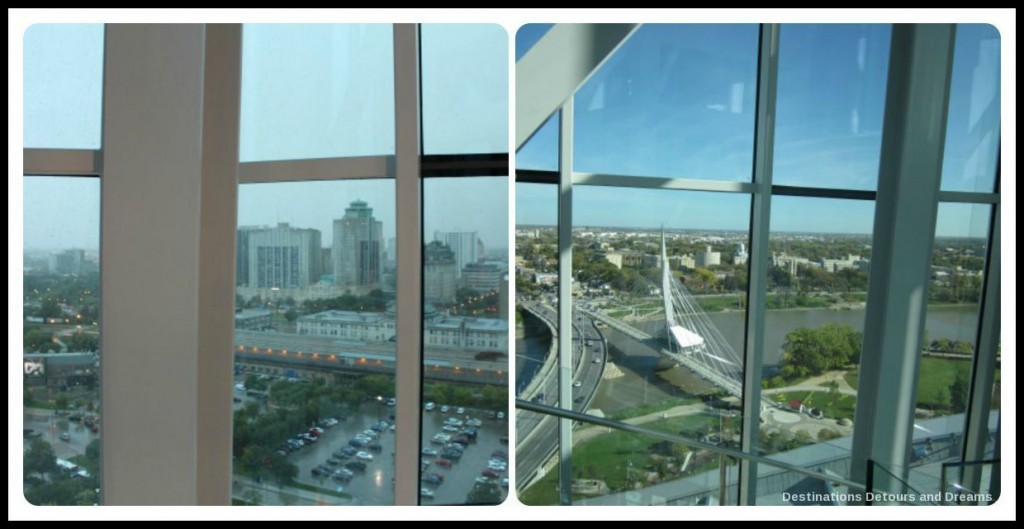 Winnipeg views from the Tower of Hope,
on my rainy day visit and last year’s sunny day visit

The museum is open seven days a week in summer, six days (closed Mondays) the rest of the year. You can wander through on your own or take one of several guided tours. The Mikinak-Keya tour explores rights and responsibilities from a First Nations perspective. The Explore the Galleries tour focuses on the exhibits. The Discover the Building tour focuses on the building architecture and the encounter between architecture and human rights. There is also a free mobile application that can be downloaded and used as a tour guide.

The museum website recommends you allow three to four hours for your visit. I found that by two-and-a-half to three hours I’d reached a point where it was difficult to absorb more information. However, I live in the city and know I can easily return to explore more deeply those exhibits I skimmed over. I also visited alone. If I had been with someone and we’d discussed items, something I saw many of the visitors doing, my visit could easily have stretched another hour.

The museum is accessible. The ramps are not the only mechanism to get from one level to the next. Elevators are available. All videos with spoken words (excluding music lyrics) are interpreted via ASL and LSQ on screen and have CC in both English and French. A Braille gallery guide is available.

Although not all exhibits are appropriate for children, the museum welcomes children and several exhibits have been designed with children in mind, such as the motion-sensor light game in the Canadian Journeys gallery. Summer programming featured special activities for children. Museum staff can help guide you and your child. I witnessed this being done as I toured the museum and overhead one little girl tell a guide she wanted to work in the museum when she grew up. 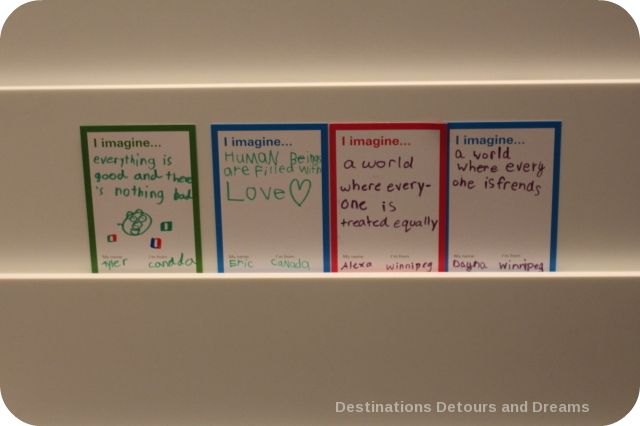 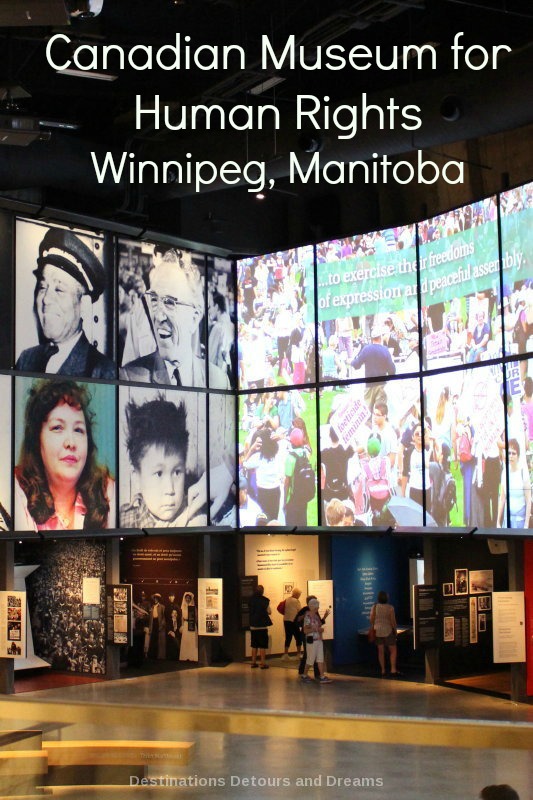 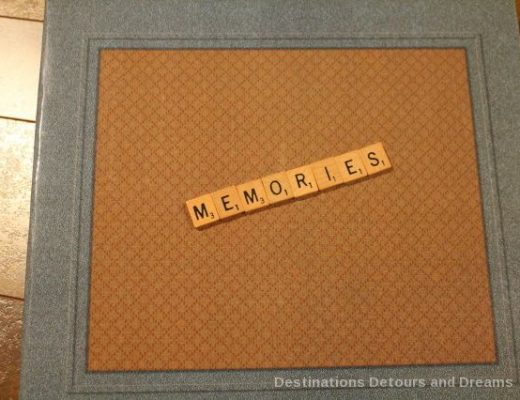