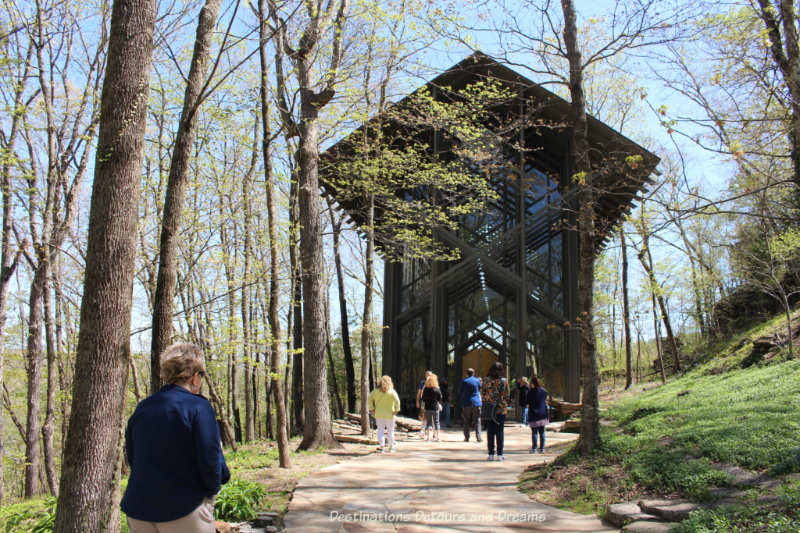 (Disclosure: I visited the chapel as part of a post-conference press trip following the 2018 North American Travel Journalists Association conference in Branson, Missouri. Opinions and impressions, as always, are my own.)

Until I saw it myself, I couldn’t imagine how a small woodland chapel in the Ozarks attracted over a thousand visitors a year. The stunning Thorncrown Chapel outside Eureka Springs, Arkansas blends in serenely with the scenic woods around it. The story of how it came to be built is as fascinating as the architecture.

The first view of the chapel at the end of a short path through the woods is breathtaking. The chapel rises up 48 feet into the sky like the trees that surround it. The chapel was designed by architect E. Fay Jones, a Frank Lloyd Wright apprentice.  Organic architecture, promoting harmony between human habitation and the natural world, was a feature of his work. In 2000, Thorncrown Chapel was voted the fourth-best building by the American Institute of Architects. 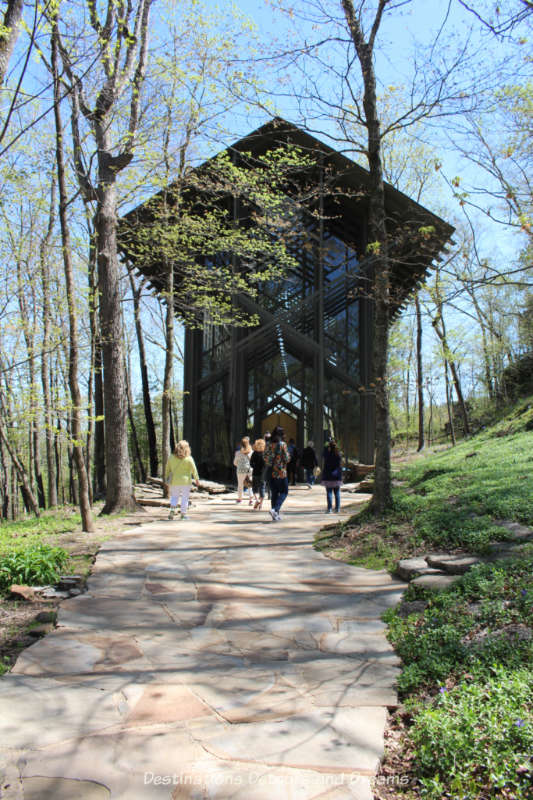 The inspiration for Thorncrown Chapel was Sainte Chappelle, a light-filled Gothic-style chapel in Paris. Fay sometimes referred to Thorncrown’s style as “Ozark Gothic.”

The chapel is made with organic materials to fit into the natural setting. To preserve the natural setting, no structural element larger than what two men could carry through the woods was used in the construction. Although at first glance the chapel may look like it is made of steel, it is actually made of treated yellow pine stained grey like the bark of the surrounding trees. The only steel in the structure forms a diamond shaped pattern in the wooden trusses. A flagstone floor and rock wall match the rocky terrain. 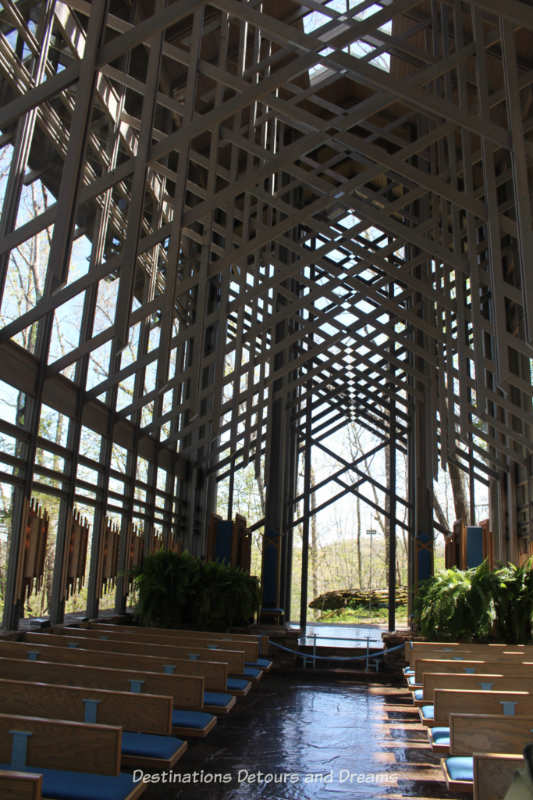 The structure contains 425 windows and over 6,000 square feet of glass. The floor-to-ceiling windows create a feeling of connection to the landscape around you. It is as if no wall separates you from nature when you are inside the chapel. 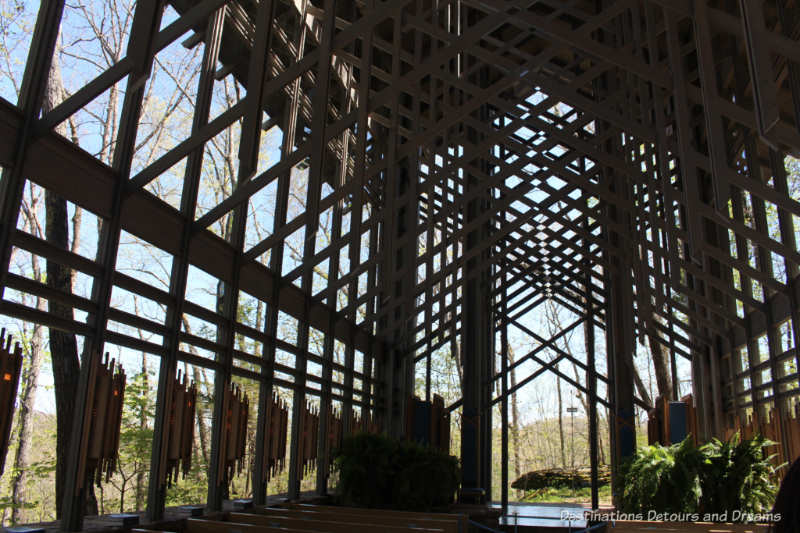 All that glass gives the impression of a fragile building, but that is not the case. The overhang provides a great deal of protection. Over the past 38 years, only four windows required replacement. Some management of trees around the building is done to prevent them from falling onto the building, but generally nature is let be. There are fewer trees now on one side of the chapel than when it was built. That is not because of anything done by man, but nature taking its course.

How did the chapel wind up in these woods in the first place? It is because of one man whose dream of a chapel in the woods became such an obsession some labelled him as “crazy.”

In 1971, school teacher Jim Reed purchased land near Eureka Springs for his retirement home. People often stopped at the wide driveway at the base on the hill to turn around, to enjoy the scenery, or to picnic. They frequently left a lot of trash behind. One day while cleaning up the garbage, Jim mused that he could either build a fence to keep people out or give them something to sit in and let them enjoy God’s creation. He decided on the latter. His wife didn’t share his enthusiasm. Neither did other family and friends. Jim did not go to church and had showed little interest in spiritual things. The chapel seemed an unlikely project. Jim didn’t let go of the dream and eventually his wife agreed if Jim could find an architect. Jim was surprised when E. Fay Jones readily accepted the proposal to design the chapel.

Construction began in 1979. Halfway through the project, funds ran out. Jim couldn’t get a loan. He approached friends and family who turned him down and told him he was going into financial ruin. Finally ready to give up, he walked through the half-finished chapel for one last look expecting never to return. He knelt in the chapel to pray and experienced a life-changing moment. He turned some elements of his life around and left the completion of the chapel in God’s hands.

Shortly after that, Jim received a letter from a woman in Illinois who was willing to provide the funds to finish the chapel at an interest rate that was one-third of that being charged by banks. Thorncrown Chapel opened on July 10, 1980. Jim Reed died in 1985.

Thorncrown Chapel is located on Highway 62 West just outside of Eureka Springs, Arkansas. It has no permanent congregation and operates as a tourist non-denominational ministry. Two services are held each Sunday. The chapel can also be rented for weddings.

The chapel is open most days March through December. Check the website for specific times. There is no admission fee, but donations are accepted. There is ample parking for buses and RVs.

When you pull into the parking lot, you may notice another small chapel tucked into the woods on the other side of the lot from Thorncrown. That chapel has an active congregation whose pastor is the son of Jim Reed. 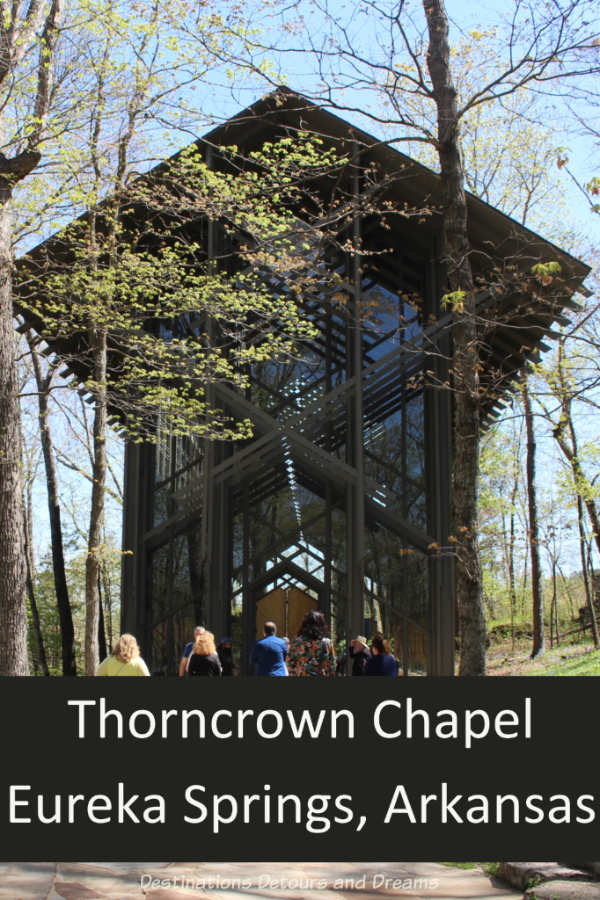 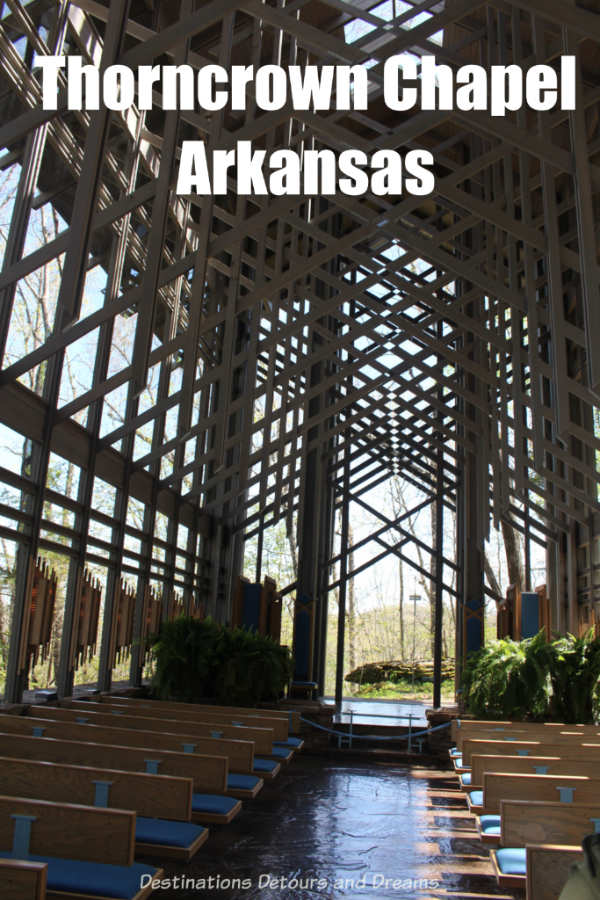