Salt Spring Island is the largest of the southern Gulf Islands in the Strait of Georgia between mainland British Columbia and Vancouver Island on Canada’s west coast. I first visited the island in November 2018 after my daughter moved there. When I told people where I was going, roughly half of them gave me blank stares. They didn’t know where Salt Spring Island was. Those who had been there spoke favourably about its natural beauty, Saturday market, and laid-back vibe. Others who knew of the island but had not personally visited it associated it with hippies, artists, new Agers, organic farming, and a few famous people who live or have lived there (e.g. children’s artist Raffi, Randy Bachman of the Guess Who and Bachman Turner Overdrive, artist Robert Bateman). All of these things and more combine to give Salt Spring Island its unique character and make it a great place to visit.

Salt Spring Island is part of the traditional territory of the Saainch, Cowichan, and Chemanius First Nations. Indigenous use of the island dates back at least 5,000 years. Permanent settlements fluctuated over the years.

In 1857, nine slaves who’d bought their freedom arrived. In the mid nineteenth century, many Hawaiians, who called themselves Kanakas, also settled on Salt Spring, often after years working and exploring with the Hudson’s Bay Company and other companies. Other early immigrants to the islands included British immigrants, African Americans from San Francisco, and other Americans, Europeans and Australians who had been attracted to Canada as part of the gold rush or were former Hudson’s Bay Company employees.

Settlers were given the approval to pre-empt land in 1859. The land was rugged and much of the land that was to be farmed had to cleared of huge Douglas Fir trees. There were no roads and no regular transport to and from the island.

Today, the island is home to just under 10,500 year-round residents. That population includes farmers, artists, artisans, healers, and free-thinkers.

To explore more of Salt Spring Island history from the 1850s to 1950, visit Salt Spring Island Museum in Ganges. The free museum is open on select days spring through autumn. I did not get the opportunity to visit the museum on my visits to the island thus far, but would like to on a future visit.

Salt Spring’s stunning natural beauty brings both visitors and residents to the island. The 70-square-mile-island contains old-growth forests, mountains, parks, beaches, and inland lakes. A drive through the island takes you through towering forests and past spectacular coastal views.

The mixture of forest, field and shore habitats on Ruckle Provincial Park makes it one of the most productive wildlife viewing areas on Salt Spring Island. There are sea lions and killer whales out at sea and mink and river otters along the shoreline. Deer are commonplace throughout the island. The view over Swanson Channel is peaceful and enchanting. Mount Erskine Provincial Park has some of the best views on the island, but note that the trail is rocky and steep. Baynes Peak in the day-use-only Mount Maxwell Provincial Park is one of the highest points on the island and offers superb views. However, note that the gravel road to the peak is steep, narrow, and rough.

Nature’s relaxation effect and lowering of the heart rate may well be a major contributing factor to the island’s laid-back vibe. I take a lot of photographs when we travel, but, as we made our way through the island, I found myself often leaving the camera alone even when it was handy. Absolutely every spot was photo-worthy. I just wanted to relax and take it all in.

For a bit of whimsy on your hike, look for fairy doors along the Mount Erskine Trail. (Note that this is not considered an easy trail.) The fairy doors may be hard to spot and looking for them can be a bit of treasure hunt. As of June 2022, there were supposedly 6 doors to be found. If you don’t find them all, it is possible some have been removed. Some people do not like the doors being there because visitors leave trinkets at them that shouldn’t be part of nature. Roger Blunt is well-known on the island for the fairy doors he creates and sells around the world. You can find his work in Ganges’ stores and you may find him at the Saturday market.

Although the island was rugged and needed to be cleared when settlers pre-empted land starting in 1859, by the early 1900s, Salt Spring was developing a farming reputation and was known for its large fruit harvests. There was dairy, poultry, and sheep farming.

Today Salt Spring Island is known for its organic produce. Roadside farmstands are a common sight. Often the produce is left unattended with a “honour box” for you to deposit your payment. Salt Spring Island lamb is prized. Local seafood is served in restaurants.

By the 1930s, people were holidaying on Salt Spring Island. In the 1960s, artist and craftspeople arrived seeking an alternative lifestyle and inspiration in the island’s natural beauty. Today the island is recognized for its artists and artisans.

Salt Spring Island’s food producers and artists meet at the island’s famous Saturday market. Each Saturday from the first weekend in April until the end of October over 140 food producers, artists, and artisans set up booths in Centennial Park in the heart of Ganges. The quality of products, all of which must be “vendor produced and sold,” is superb and you’ll have opportunity to chat with producers. There is live music and entertainment.

I visited the market in October. It had a relaxed, community feel that invited one to take time, linger over stalls, and talk to producers. The market is much busier in summer months, the height of the tourist season. It also draws day visitors from nearby Vancouver Island. In spite of it being busier at that time I suspect much of that community feel remains.

An event I attended on the island with my daughter that was a combination of spiritual and recreational was the Thursday night Dance Temple at Beaver Point Hall.

The main town on Salt Spring Island is Ganges located toward the northern end of the island along a sheltered harbour. It is here where the island’s main stores are located. It is a pretty and charming town well-suited for leisurely strolls and browsing. There are a number of art and specialty stores. True to Salt Spring’s eclectic nature, clothing stores tend to be either upscale or thrift stores. There are a number of coffee shops and restaurants.

Salt Spring Island is both rural and cultured. It remains rugged in many parts. As an island, it stands alone and can become isolated during winter storms. Its population is an eclectic mix of people. There is a strong sense of community.

Ways To Soak Up The Salt Spring Island Vibe

There are no chain hotels on Salt Spring, but there are other hotels, motels, bed and breakfasts, cottages, resorts, and campgrounds. Airbnb properties range from rustic cabins with outdoor plumbing to luxurious villas. Many are studio suites attached to an owner’s property or in a separate cottage on the property. We’ve enjoyed stays in three such Airbnb properties on the island. See Salt Spring Island Tourism or Airbnb for options.

Getting Around On Salt Spring Island

There is a public transit system that operates buses on five routes but frequency is limited. Some routes have only two buses a day. There is also a taxi service.

The best way to explore the island is by car. There is one company on the island that rents scooters and cars. The car rental rate is expensive. We found it more economical to rent a car on Vancouver Island (in our case at the airport) before taking it on the ferry to Salt Spring. If you have an electric vehicle you want to take to the island, you’ll find several charging spots. Salt Spring Island has the largest per-capita ownership of electric vehicles in Canada.

Bicycle rentals are available. Given the narrow winding roads and sometimes steep climbs, I personally think relying on cycling for seeing the island is dangerous.

There are no traffic lights on the island. Nearly every road is scenic, but there are curves and hills. Hitchhiking is common on the island.

See Salt Spring Island Tourism page on getting around the island.

Getting To Salt Spring Island

The route from Tsawwassen near Vancouver on the British Columbia mainland takes anywhere from an hour and a half to almost three hours depending on the individual sailing. Some sailings stop at other Gulf Islands enroute. Routes and schedule times vary by day, but in general there are only 2 sailings a day. Reservations are recommended. Because of the limited schedule, many people choose to get to Salt Spring from the mainland with two ferry rides – taking the ferry from Tsawwasen to Swartz Bay on Vancouver Island and then taking the ferry to Salt Spring from there.

The third ferry route runs between Vesuvius Bay at the northwest end of Salt Spring to Crofton in the District of North Cowichan on Vancouver Island. There are approximately 8 to 10 sailings a day. The route takes 25 minutes and covers 2.8 nautical miles. Reservations are not accepted.

Harbour Air Seaplanes operates three to five flights daily, depending on the season, between Vancouver Harbour and Ganges Harbour on Salt Spring Island. 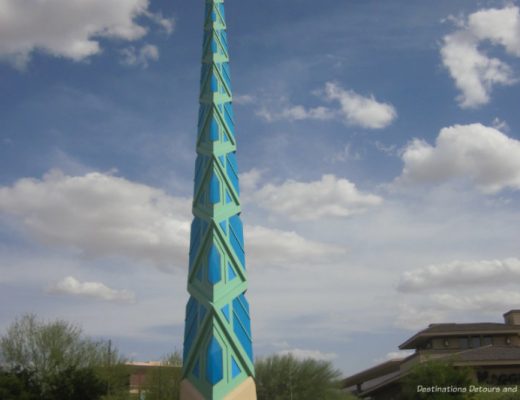 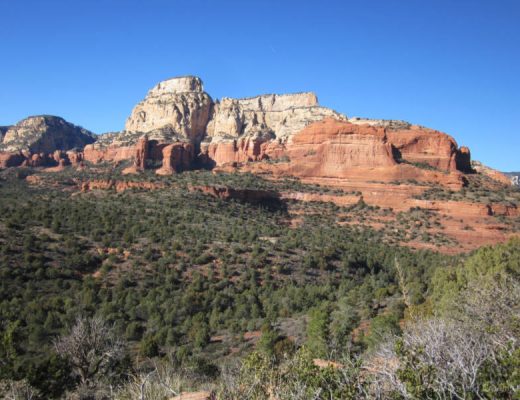 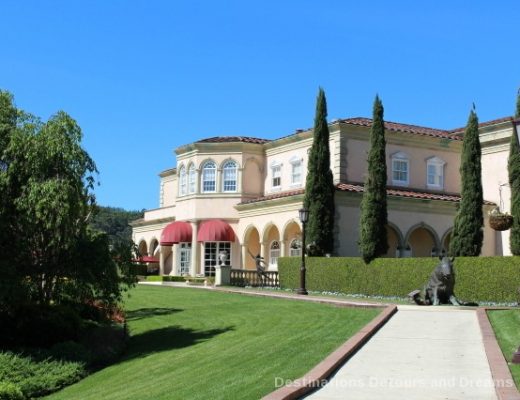 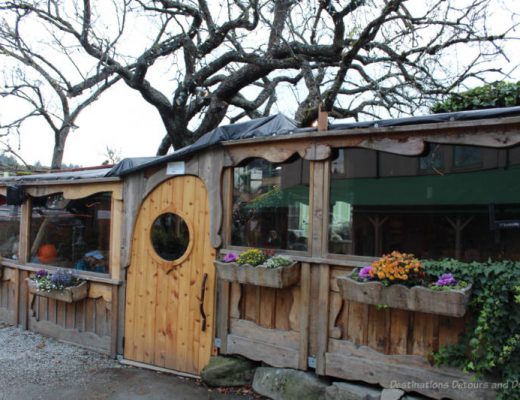