A walking tour in the West End, a neighbourhood of Winnipeg, Manitoba, Canada known for its collection of murals

There are over 600 murals in my home city of Winnipeg, Manitoba, Canada. The West End neighbourhood contains a high concentration of these murals. They not only beautify the area; they tell the stories of its history, cultures, and personalities.

The West End developed as a working and middle-class residential area in the late 19th century and grew rapidly due to its proximity to downtown. It is is centrally located in the heart of the city. At one time the neighbourhood would have sat on the western edge of the city’s boundary, but the city now extends miles to the west after Winnipeg amalgamated with surrounding communities in 1972.

Many Winnipeg families have roots in this neighbourhood. Immigrants have made their home in the West End since it was formed. Today, it is an ethnically-diverse neighbourhood. The murals showcase the area’s history and diversity. The Mural Program is an initiative of the West End Biz, an organization supporting community development and promoting business in the area.

The West End Biz offers guided mural walking tours in the summer. I took the tour in 2015 and again in 2020. My second tour covered some of the same murals I had seen five years earlier as well as some I hadn’t seen before. The pandemic has changed a few things around how the tours are conducted. Participants are required to wear face masks, as does the tour guide. Tour group sizes are capped at 6 people. Families or connected groups of people need to book as a group. After that booking, no other bookings are accepted for the same time slot. That makes it feel almost like a private tour. I took the tour with a close friend. We were the only two on the tour. Ironically, we were also the only two on the tour we’d taken five years earlier, but that was simply the way it had worked out then and not by design.

Many of the murals tells stories about the community, its history, its culture, and varied ethnic groups.

A Woman’s Parliament by Mandy van Leeuwen, created in 2016, celebrates the story of the first women getting the vote. The scene in the mural depicts the Women’s Parliament, a satirical play staged January 28, 1914 at the Walker Theatre (now the Burton Cummings Theatre) in which women in a mock parliament debated giving men the vote. It features suffragist Nellie McClung in the midst of her speech imitating Premier Roblin.

Remembering the Roller Rink by Annie Bergen and Marcus Bauer, created in 2011, pays tribute to the former Winnipeg Roller Rink which stood at the corner of Portage and Langside from the 1930s until 2007. The disco ball was created in secret by mosaic artist Ursula Neufeld and was a surprise, even to the mural artists, when the mural was unveiled. The roller rink was a feature of Winnipeg life for years and many families, mine included, have memories and stories featuring the rink. My father-in-law and mother-in-law met at this rink. My mother-in-law used to love to tell the story about their meeting and how impressed she had been that he walked her home at the end of the evening, only to discover he lived next door.

When the rink was demolished because the building was no longer safe, the wooden floor was carefully dismantled and repurposed to form a feature wall in the atrium of the Richardson College for the Environment and Science Complex, the University of Winnipeg building that now sits on the site of the former roller rink. We were not able to enter that building on the 2020 tour and could only peer through the window. However, I do have a photo in the atrium from my 2015 tour.

Over the years, murals may be replaced, refreshed, touched up, added to, or changed. An example of an updated mural is the above-pictured World Cup Soccer: The Real League of Nations. It was created in 2009, but the large ball on the left has been painted over to depict the 2014 FIFA World Cup ball.

O Kanata was created in 2017, Canada’s 150th year. It is about celebrating the role of Indigenous Peoples and honouring the beauty of Canada’s natural landscape. Canada’s waters, mountains, prairies, and northern lights are all represented in the mural. Smudging is included in the design to represent cleansing the land of the harms of the past.

The quilt pattern of Woven Together by artists Annie Beach and Brianna Wentz, assisted by local children and youth in 2017, includes blocks of patterns inspired by traditional textiles from the ethnic groups in the West End. In place of street names, there are different versions of the term “home” roughly translated in our official languages and the 9 most common non-official languages from the 2011 Census. The bottom border contains buildings designed by the youth participants emphasizing the idea of home.

Ellice Avenue, which was known as Nellie Street before 1881, is another major street in the West End. Artist Sara Wilde worked with 190 kids to create Memories of Ellice Avenue in 2014. The mural ripples out from Cat Island to depict Ellice Avenue across time. Accounts from the 1880s say that the area around Maryland and Ellice Avenue would flood every spring forming an island in the centre that was dubbed “Cat Island” because of its shape. Children would wade or canoe out to the island to play. The names of the children involved in creating the mural are written in the water around the island.

One of the things our guide pointed out to us about this mural was that it showed the history of another mural. The West End Cultural Centre appears at the top of the mural spanning two time periods, one showing it as the St. Matthews Church built in 1908 and the other showing the building in its current incarnation as a community art centre at a time when it was painted with a colourful and distinctive mural, which is no longer on the building.

Adam Beach on Location, created in 2003 by Charlie Johnston, depicts actor Adam Beach as himself and in a number of his roles, including the one in the Disney movie Squanto: A Warrior’s Tale that brought him stardom. Street signs in the mural reference his home at Agnes and Ellice, where he came to live with his aunt and uncle when he was two, and his career as a Hollywood actor with a street sign of Hollywood and Vine.

Bill Norrie was Winnipeg’s second longest-serving mayor. He grew up in the West end and served as mayor from 1979 to 1992. The mural honouring him aims to celebrate the many milestones of his life. It includes, among other items, photos of his childhood home, a framed Order of Canada award, Rhodes Trust Scholarship, a vintage photo of The Forks (he helped negotiate the tripartite agreement to establish The Forks, now a prime Winnipeg attraction), and a statue from the Leo Mol Sculpture Garden which Norrie officially opened in his last year in office. A portrait of his wife Helen Norrie sits at the bottom of the mural. Helen was a teacher and librarian.

Harry Lehotsky, a pastor who moved to Winnipeg from New York in 1983, is the subject of a 2006 mural on by Michel Saint Hilaire and Mandy van Leeuwen. He was known for his advocacy for the poor in the West End. He started a community drop-in centre. He helped found housing programs and the Ellice Café and Theatre, which was a renovated venue for affordable entertainment and subsidized low-income food service.

A Man Called Intrepid by Dave Carty, created in 2014, is located on the wall of a former Legion and honors Sir William Stephenson. Stephenson, born and raised in Winnipeg, became an Ace fighter pilot in World War I and served with British Intelligence in World War II. He was also an inventor. He and a friend patented a device to transmit photography wirelessly, a device considered to be a precursor to television. He is considered to be the inspiration for Ian Fleming’s James Bond. The many aspects of his life are represented on the mural.

Zoohky by Jill Sellers (2004) is one of the best-loved murals in the neighbourhood. It portrays a local hero. Zoohky spent his days cycling through the area and fixing things—broken appliances, bicycles, cars, etc.  He was also a poet who delighted in reciting his poems. He died of a heart attack in 2002 at the age of 73. In 2003 the Winserve bingo hall was renamed “Zoohky Memorial Hall” and the mural painted on the side of the building. Initially the mural contained only the figure of Zoohky. His bicycle was not in it. The phones at West End BIZ rang off the hook with people asking “Where’s Zoohky’s bike?”. After an article appeared in the Winnipeg Free Press, people started sending in cheques to help pay for the bike. The bicycle was subsequently added to the mural.

It is possible to explore the murals on your own. This free self-guided audio tour may help. The information provided on the guided tour about the details within the murals, their meanings, the history of the subjects, and the stories of the creation of the murals makes the experience much richer. Still, there were several murals we simply passed by on the two-and-half hour tour. Our guide said there are just too many murals in the area to talk about each and every one. She was, however, willing to answer any questions we asked about them.

We covered a small section of the West End in our walking tour. There are many more murals to found in the larger community. The West End Biz website has a mural map. The Murals of Winnipeg website is devoted to showcasing murals throughout the entire city.

Near the end of our tour, I spotted the words “I took the West End BIZ mural tour” written on the side of a building. Our tour guide said she’d written those when she worked for the BIZ in the summer of 2018. She’d first written them in sidewalk chalk. They washed away when it rained. She rewrote them with pastel inks. The intent had been for the BIZ to remove them at the end of the summer, but, to her surprise, they have remained. 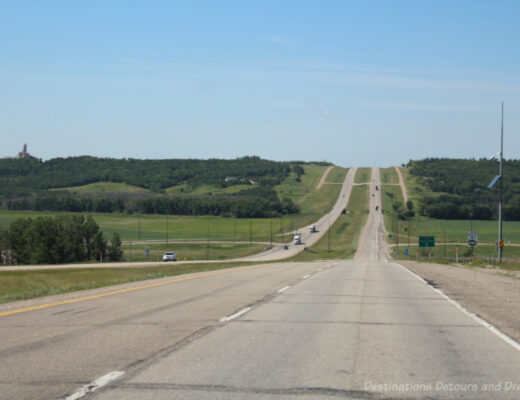