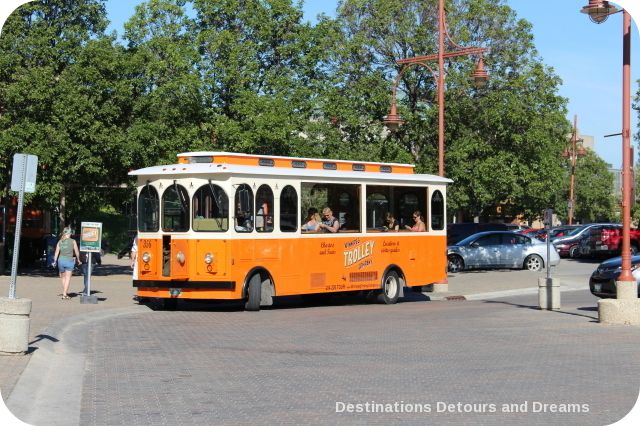 a bus tour of Winnipeg, Manitoba

I board the historically-inspired trolley bus for the Heart of a Nation City Tour at The Forks. The Forks seems a fitting spot to begin the tour of Winnipeg, Manitoba. Located at the junction of the Red and Assiniboine Rivers, The Forks has been a meeting spot for over six thousand years. It remains a meeting spot today, with shopping, dining, museums, outdoor activities, and entertainment. 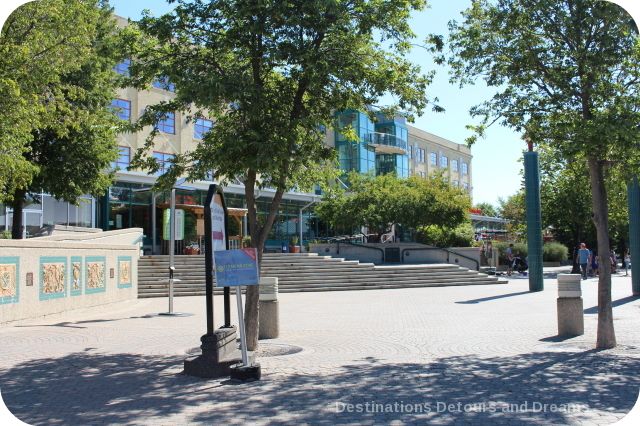 City bus tours can be a great way to get an overview of a city and what it offers visitors. Today, I am curious to see what is highlighted in this tour of my home city. There are approximately fifteen other people on the tour with me. I don’t catch where all of them are from, but do hear Regina, Minneapolis, and New York.

Our guide begins by talking about the name of the tour – Heart of a Nation. Winnipeg is in the longitudinal centre of Canada. Our guide says the tour will also take a metaphorical view and highlight Winnipeg’s role in the development of Canada. 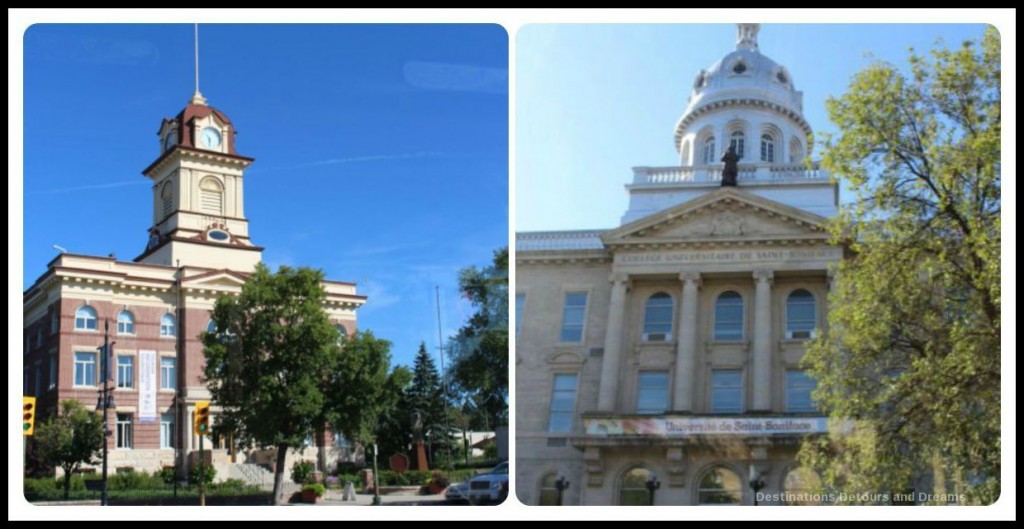 We cross the Provencher Bridge into Saint Boniface, Winnipeg’s French quarter. As we pass the St. Boniface Cathedral, I hear oohs and aahs from the other passengers. The Cathedral was built in 1908 and destroyed by fire in 1968. The front facade remained and has been incorporated into the design of the new church built behind it. 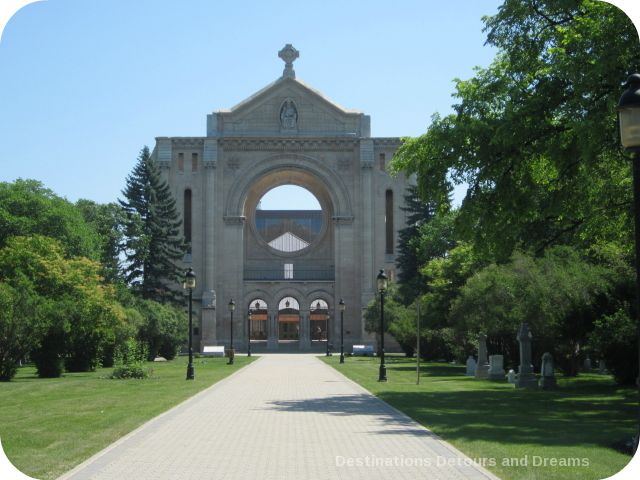 We go through the Exchange District, a National Historic Site where you’ll find the largest collection of turn-of-the-century architecture in North America. The area has been the setting for several major motion pictures. 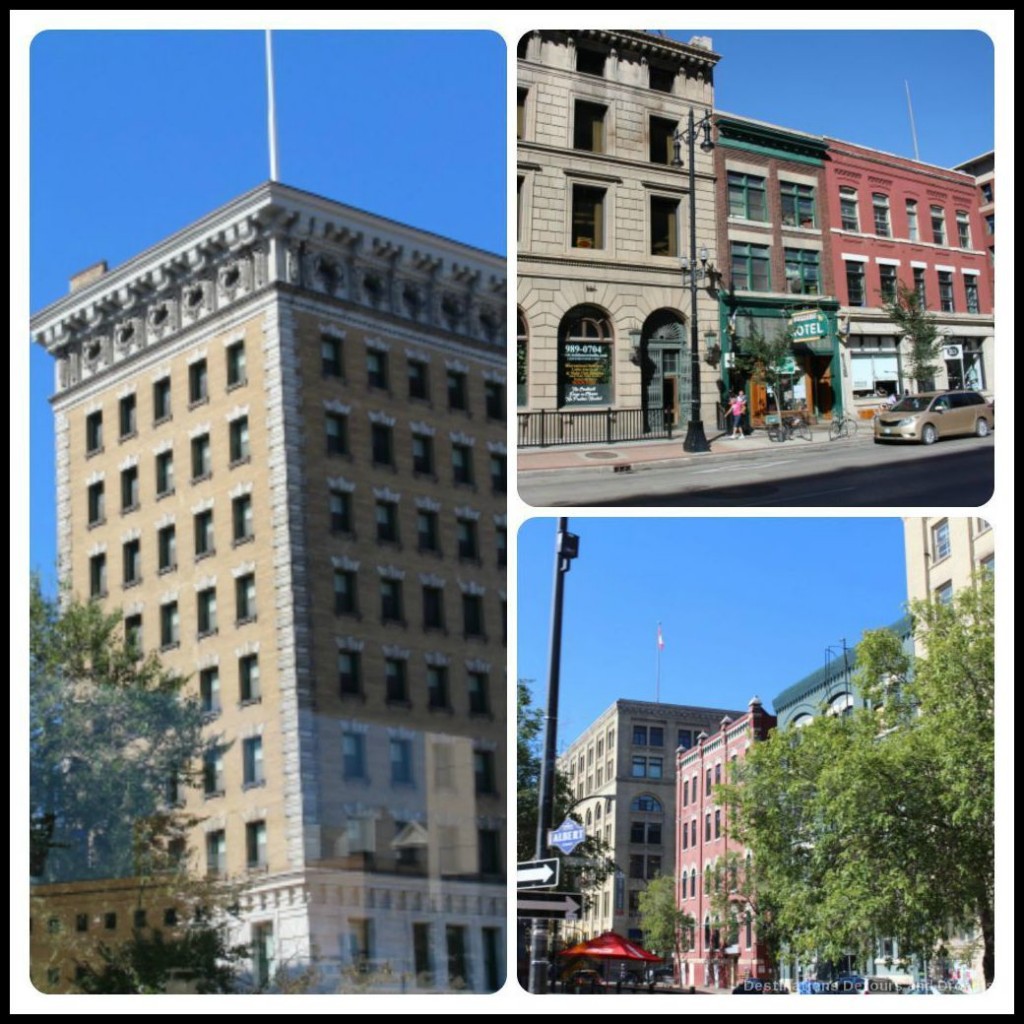 Architecture in The Exchange

We drive down Portage Avenue and the heart of downtown. Our guide points out both old and new buildings – the Birks building, built in 1901, with six terracotta medallions on the front about the third floor, each one depicting a material used by jewelers; the MTS Centre, built in 2004, now home to the Winnipeg Jets hockey team; the Hudson’s Bay store built in 1926; Manitoba Hydro Place, opened in 2009, the most energy efficient office tower in North America and the only office building in Canada to receive LEED®Platinum certification. We head toward Wellington Crescent. 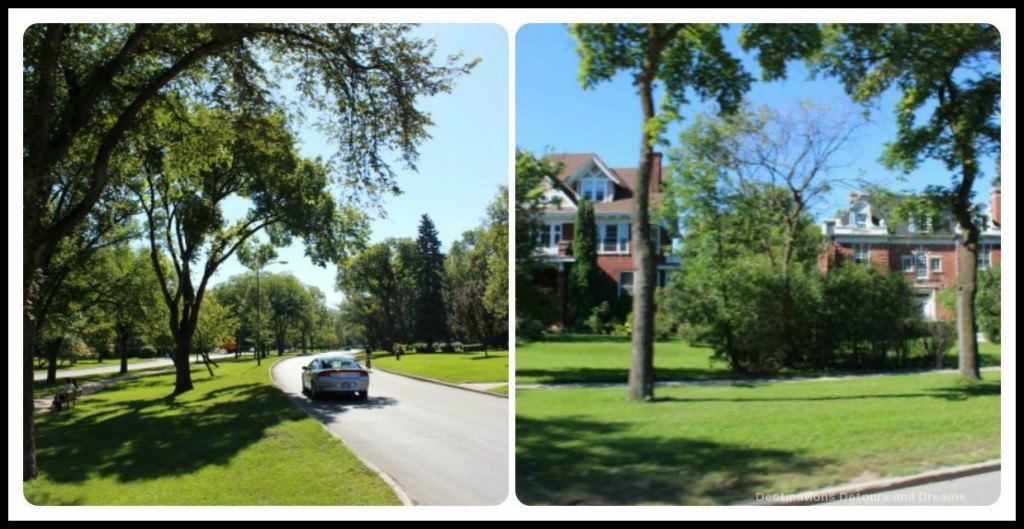 Wellington Crescent is a wide boulevard lined with large, stately homes. Many of the city’s wealthiest and most prominent citizens built mansions here in the late 1800s and early 1900s. We drive down Wellington Crescent and into Assiniboine Park. The park contains green space, an outdoor theatre, a zoo, English gardens, French formal gardens, a sculpture garden, a Conservatory, cricket grounds, a Winnie-the-Pooh gallery, a playground, and forest area. 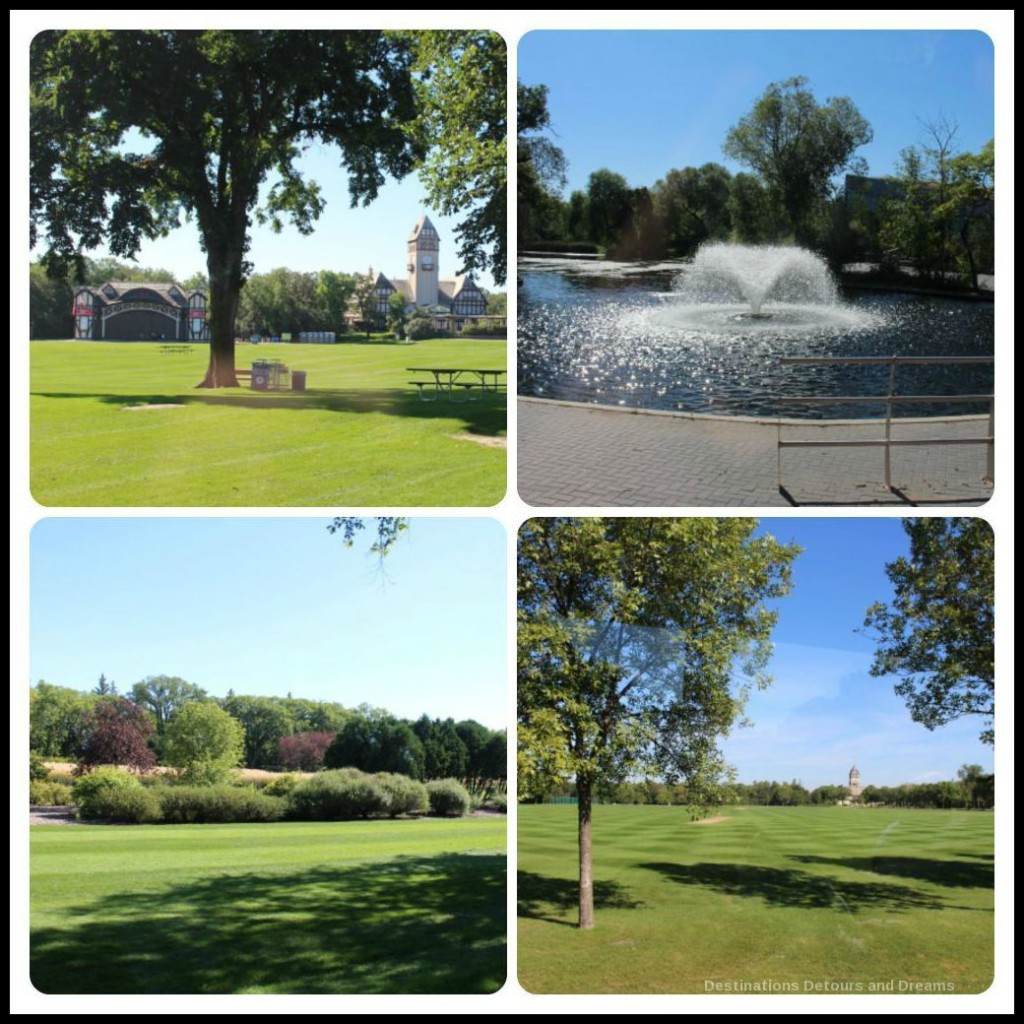 As we travel, our guide provides historical background – about the fur trade, Louis Riel, La Vérendrye, the 1919 General Strike, and more. We continue back to downtown through River Heights, a neighbourhood  with streets lined with mature trees forming canopies. The neighbourhood developed in 1912, the hundredth anniversary of the War of 1812, and many of the streets are named after figures from the 1812 war. As we pass the community centre where the Guess Who often played, our guide plays a snippet of “American Woman” through the speakers. We pass the house where Neil Young once lived. Our guide tells a story about current owners returning home one evening to find a man sitting on their doorstep. The man turned out to be Bob Dylan, who had come to see where Neil Young had grown up. 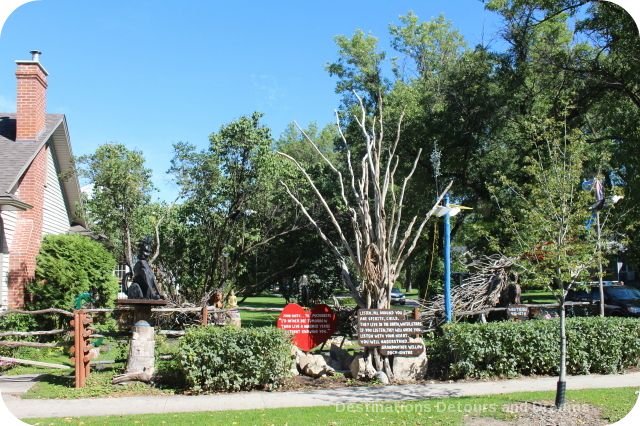 Our guide peppers the factual information he provides about the places we pass and their history with amusing anecdotes. My favourite is the one he tells about Francis Cornish, Winnipeg’s first mayor. The police arrested him one evening for driving his horse and carriage intoxicated. Cornish was a magistrate and the next morning he appeared before himself. He pleaded guilty. In his magistrate role, he fined himself and then waived the fine because it was a first offence.

We drive down Corydon Street, known as Little Italy because of the Italian influence and restaurants, although there are a variety of dining options here. Our guide says he’s counted as many sushi and Japanese places as Italian. We pass through Osborne Village, the most densely populated neighbourhood in Winnipeg. We drive around the Manitoba Legislative Building and our guide tells us about the many freemason symbols incorporated into the building. (Side note: The Hermetic Code Tour is a fun and interesting tour of the Manitoba Legislative Building focused on the freemason codes and symbols.) 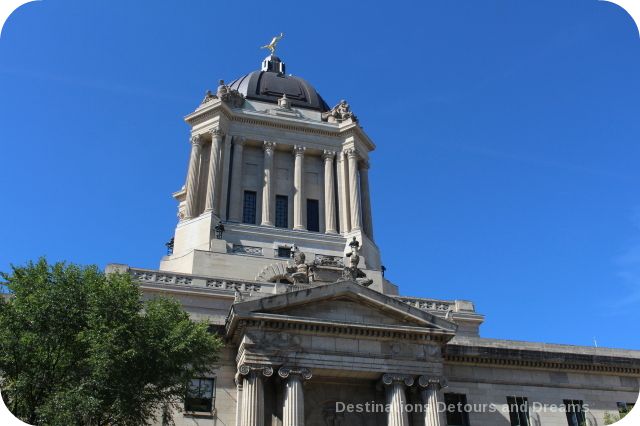 Other buildings of interest on the tour include the Winnipeg Art Gallery whose Inuit art centre, Qaumajuq, houses the world’s largest collection of Inuit art, the Manitoba Museum, which showcases the rich natural and human history of Manitoba, and the Canadian Museum for Human Rights. When the tour returns to The Forks, passengers disembark and comment on how much they enjoyed the tour and how interesting it was. 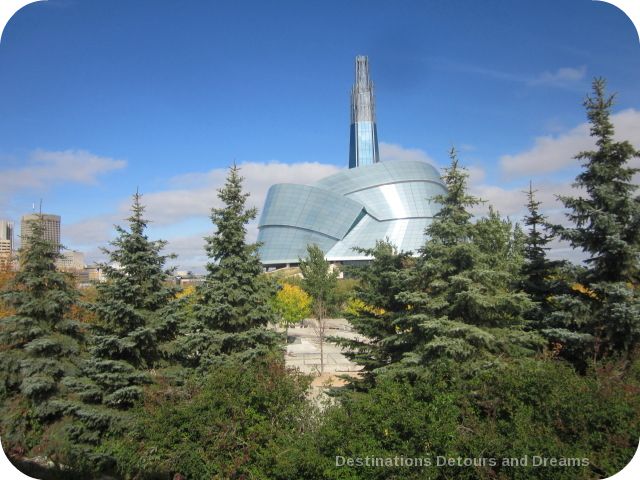 I think the tour provides a good overview of the attractions in central Winnipeg and good background about the city. Further exploration of the places highlighted could keep a visitor engaged for days.

The 2-hour Heart of the Nation City Tour operate from mid-May through October. 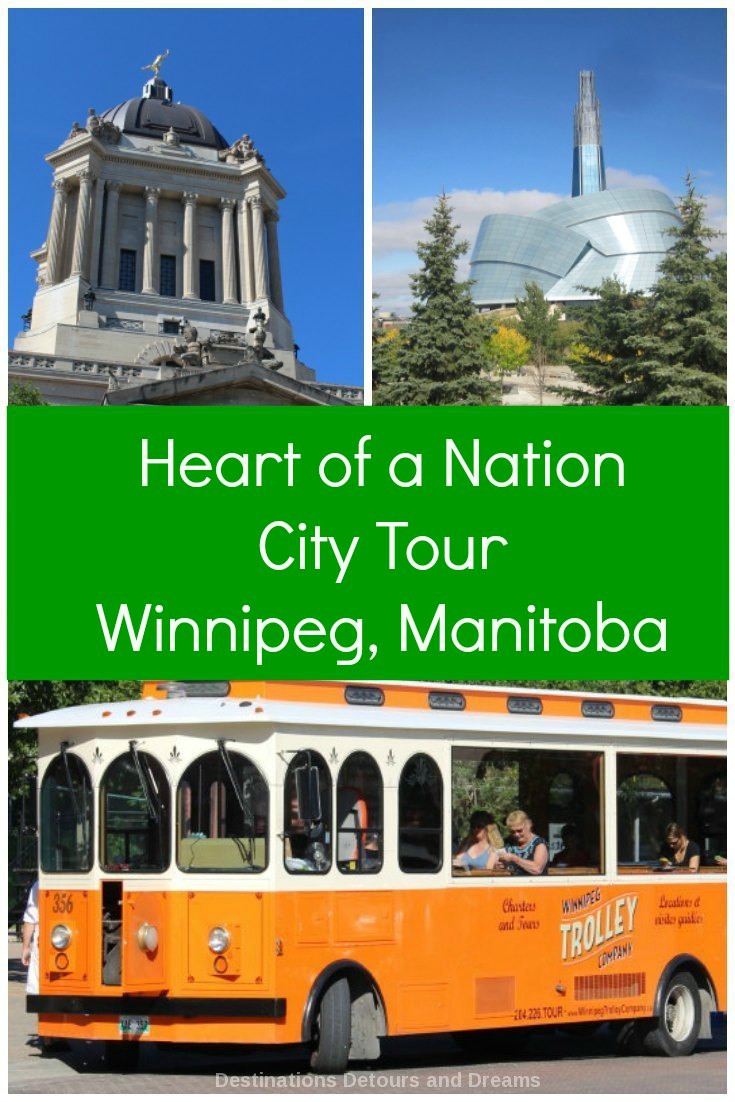 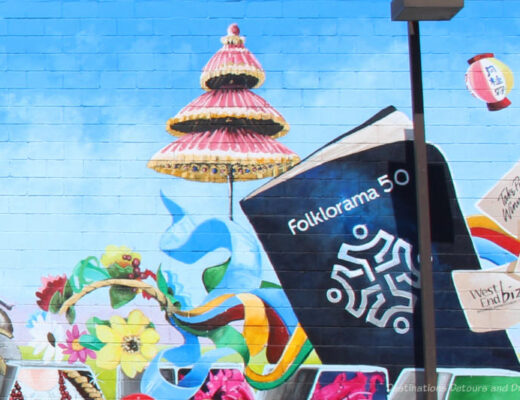 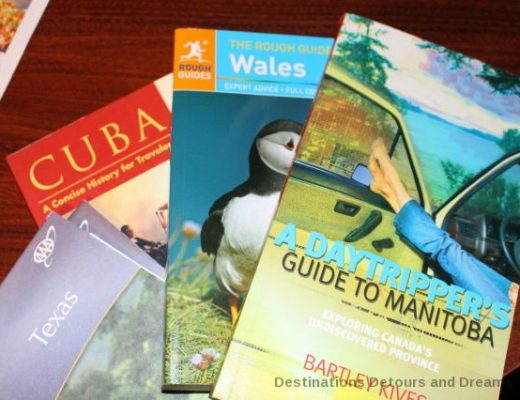