In a previous post It is Bright, It is Lit, I offered a preview of Qaumajuq, the Winnipeg Art Gallery’s Inuit art centre. The centre in Winnipeg, Manitoba, Canada, is home to the largest public collection of traditional and contemporary Inuit art in the world. It opened to the public in late March 2021 and I have now had the opportunity to visit in person.

After seeing a virtual preview and attending the virtual opening, I was hyped to expect something special. I was not disappointed. The 40,000 square foot building is beautifully designed to display the Winnipeg Art Gallery’s impressive collection of Inuit art. The Winnipeg Art Gallery (WAG) holds over 14,000 Inuit art works, which includes carvings, drawings, prints, textiles, and new media. You’ll find traditional soapstone carvings of Arctic animals, but you’ll also find so much more. The wide range of works displayed at Qaumajuq will broaden your understanding and may shatter a few preconceptions of what constitutes Inuit art.

The Inuit are an Indigenous people, the majority of whom live in the northern regions of Canada. Inspired by visiting the Canadian Arctic, architect Michael Maltzan designed the building to reflect the northern landscape. As mentioned on the Qaumajuq website, it celebrates the North in the South. Winnipeg is located in the southern part of Canada, just 110 kilometres (68 miles) north of the U.S. border.

Qaumajuq, pronounced “kow-ma-yourk” or sometimes heard as “how-ma-yourk,” means “it is bright, it is lit” in Inuktitut. The building and the spaces within it were named by a group of Indigenous language keepers and elders. Beneath an expanse of scalloped white granite reflecting the curves of the North, a wall of glass panes at ground level makes the museum visible to the outside and lets in light. A collection of skylights illuminates the third-floor exhibit space. Undulating white walls evoke the scale of the Arctic and provide a perfect background for displaying the art.

You can read more about the architecture of the building, its inspiration, and the role of Inuit and other Indigenous peoples in the creation of Qaumajuq in my post It Is Bright, It is Lit.

The focus of the Entrance Hall, named ILAVUT [pronounced eelah-voot] which means “Our relatives” in Inuktituk, is the Visible Vault, a three-story glass-walled vault containing approximately 5,000 carvings on its 500 glass shelves. The curved walls of the vault allow for an immersive feeling as you walk around it.

Light shining through the glass walls of the building and the vault interacts with the carvings. The carvings are organized by community. The material used for the carvings vary by community based on what is available in the community, but all the carvings in the vault are resilient in terms of being made from stone that can be shown in the light. More organic material is stored in another vault downstairs.

The volume of carvings in the vault is somewhat overwhelming. Just the amount you can see at eye level is daunting, never mind looking up or down. The carvings higher up are more difficult to see, but some are more visible from the second level.

The carvings are displayed without any identification. I would have liked to know more about them – the artist, the material used, some of the stories behind them. A staff member told me there will eventually be touch-screen panels set up around the vault with photos you can zoom in on to get more information on the pieces in the vault. Current COVID-19 restrictions don’t allow for touch-screen displays. In the meantime, there are printed sheets of paper available that map the numbers and letters displayed on the shelves with the communities the pieces on those shelves are from.

On the third floor, an intimate focus gallery named PIMÂTISIWIN [pronounced Bi-MAHDS-a-win], which means “life and the act of living, to be alive” in Cree/Ojibway, leads into a two-story 8,000 square -foot gallery with skylights in the ceiling. This main Inuit Gallery is called QILAK [pronounced qui (like the French pronunciation) qui-lack] which means “sky” in Inuktituk.

The size of this space allows for large-scale exhibits, like the fishing cabin and the shipping container shown in the above photos, to be displayed without overwhelming the space. Large wall hangings or groups of hangings can be effectively shown on the massive walls. In spite of its scale, the space is also a fitting venue for smaller pieces as well.

On the fourth floor is the Mezzanine Gallery, named GIIZHIG/KISIK [pronounced Gee-shig or Key-sick] which means “sky, heaven, day” in Cree/Michif/Ojibway. It overlooks the QILAK gallery and provides another perspective to that space.

Note: All of the art featured in the photos from the galleries is part of the inaugural exhibition entitled INUA. INUA has two meanings. It means spirit or life in many dialects across the Arctic. It is also the acronym for Inuit Nunangat Ungammuaktut Atautikkut or “Inuit Moving Forward Together.” It reflects the curators’ vision of Qaumajuq as a site where Inuit from throughout Inuit Nunangat (an Inuktituk term meaning “homeland” that describes the four Inuit land claim regions) can collectively gather and share, be inspired by previous generations, and create new pathways forward in Inuit art. INUA features work by over 90 Inuit artists from across northern Canada and some living in the urban South as well as works by other circumpolar Indigenous artists from areas such as Greenland and Alaska. For more about this exhibition see INUA: Inaugural Exhibition At Qaumajuq Art Centre.

Qaumajuq Connected to the WAG

On each level, Qaumajuq connects to the WAG building and you can walk freely between the two spaces. In conjunction with the opening of Qaumajuq, the WAG building received a new name: BIINDIGIN BIWAASAEYAAH [pronounced BEE-deh-gen Bi-WAH-say-yah] which means “Come on in, the dawn of light is here” in Ojibway. The bridge connecting the two buildings on each level is named NAKISHKAMOHK [pronounced na-KISH-ka-mok] which means “connection” in Michif. The main floor corridor between the two buildings is named OHNI IZANZAN [pronounced OH-Nee ee-ZHAN-zhan] which denotes an everlasting light in Dakota/Lakota.

Gallery exhibitions in this space change over time and may focus on items in the WAG’s permanent collection, feature temporary exhibitions of art from around the world, or showcase still more of the Inuit collection. Two exhibitions running when I visited during Qaumajug’s opening week were Inuk Style which showcased Inuit fashion designers and Nuliajuk’s Story about the storytelling aspect of Inuit culture.

The WAG’s Gallery 5, which housed the Nuliajuk’s Story exhibition, is a narrow gallery. Its deep blue walls were a good backdrop for the paintings in the exhibition. However, the small space, the darkness of the walls, and low ceiling gave me a closed-in feeling after coming from the bright openness of QILAK. The contrast made me further appreciate how the design of Qaumajuq reflects the brightness and vastness of the North.

The outdoor plaza space in front of Qaumajuq is called NUTAAQ TUMMAQTUYUQ which means “Big steps forward” in Inuvialuktun.

For more information on Qaumajuq, current exhibitions at the WAG, hours of operation, and ticket prices visit the WAG website. Tickets give you access to exhibitions in both buildings. I look forward to many more visits in the future 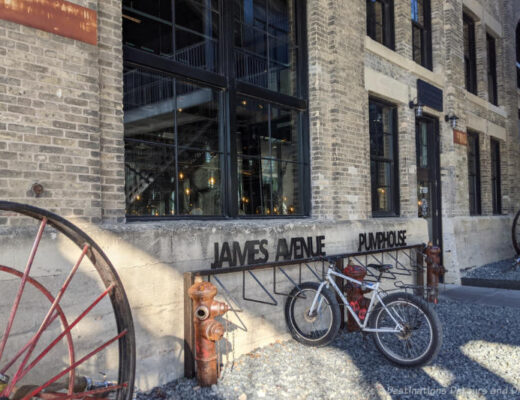 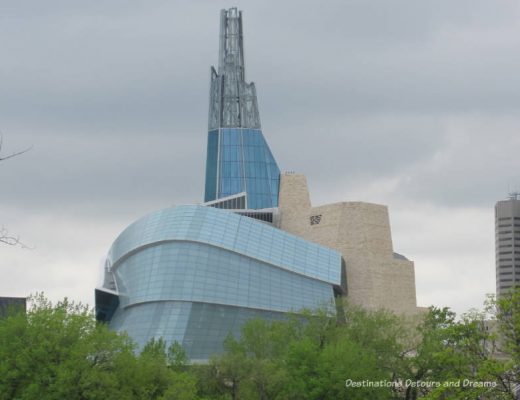 A Tour Of Gaudí's Casa Milà In Barcelona