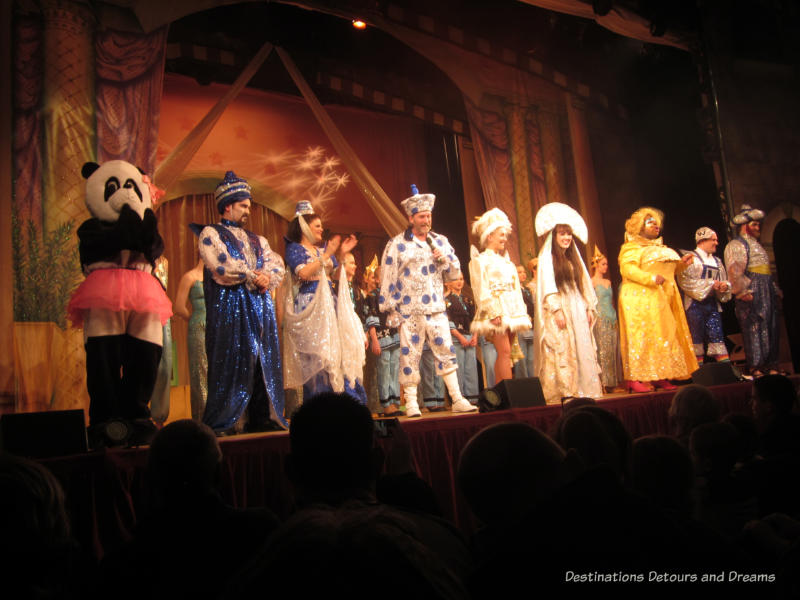 Experiencing the zany musical comedy theatre of pantomime, a British Christmas tradition, for the first time

A young boy in the front row jumps off his seat and almost crawls onto the stage as he points and yells, “Look, look.” Moments after asking the audience to alert them should zombies appear, the characters singing on stage remain oblivious to his cries and gestures. Nearly six decades older than the boy, I sit a few rows back laughing as I too yell out. Zombies don’t normally feature in the Aladdin story, but this is not a standard stage production. This is pantomime.

Pantomime, family-oriented musical comedy theatre, is a British Christmas season tradition. This is my first British Christmas and my first pantomime. Although the tradition exists in a few Canadian and American cities, “panto” is not common in North America, where sometimes its name is confused with mime, silent acting through body actions without the use of words. There is nothing silent about pantomime.

Pantomime has its roots in the Italian street theatre of the Cemmedia dell’arte of the sixteenth century. By the Victorian era, it had become standard Christmas fare in England. Today panto season starts in the lead-up to the Christmas season and runs through February with performances by both professional and amateur theatre groups.

Pantomime plots are based on traditional children’s stories, albeit with some twists and zany antics. In this performance, a petite young woman plays Aladdin. A stocky black man, with glittered cheeks and hot pink lipstick, wearing a yellow wig and ample padding under his long gold-coloured dress plays the Widow Twanky, Aladdin’s mother. This gender reversal of lead roles is one of the hallmarks of pantomime.

The Widow Twanky is loud and brash. Other characters include Wishy and Washy, Aladdin’s two sisters who moan about the work they have to do, Aladdin’s love interest Jasmine, a genie, the sultan, Abanazar who is the sultan’s advisor and the play’s villain, and Chief of Police Mustafa Poo whose name becomes the basis for a number of jokes.

Pantomime features corny jokes and slapstick comedy. The jokes elicit giggles from the children in the audience. The adults smile at layers of sexual innuendo. Audience participation is part of the performance. When we don’t boo and hiss enough at the arrival of Abanazar on stage, Mustafa Poo encourages the audience to boo and hiss louder. Children and adults in the audience willingly oblige.

Most of the other adults around the same age as my husband and me are here with grandchildren. The audience includes intergenerational family units, groups of children celebrating a birthday, and a few unaccompanied adults such as my husband and me.

When Abanazar invites Aladdin to accompany him to the cave, where he expects Aladdin to retrieve the magic lamp for him, Aladdin turns to the audience and asks if he should go. A rousing exchange of “No, you shouldn’t” and “Yes, I should” ensues. Ultimately Aladdin goes with Abanazar. We all know this will not go well.

The play gets sillier as it progresses, interspersed with a few serious moments and a variety of musical numbers. Of course there is a pie in the face at one point, but the silliest part, which has the audience roaring with laughter, comes when the cast performs a modified version of the “Twelve Days of Christmas” in which singers shoot water guns into the audience and race to catch a rubber chicken tossed across the stage.

In the end, the bad guy is defeated and we have a “happily ever after” ending. Abanazar gets his just desserts. Aladdin and Jasmine are reunited. When the cast breaks into a Bollywood number, I know I should have expected it.

I leave the theatre with a smile and a light-hearted step. Two young girls and their grandparents walk ahead of us on the way to the car park, the girls bantering “No, you shouldn’t” and “Yes, you should” to each other the entire way.

What should you do when the pantomime comes to town? I say you definitely should attend. Yes, you should. 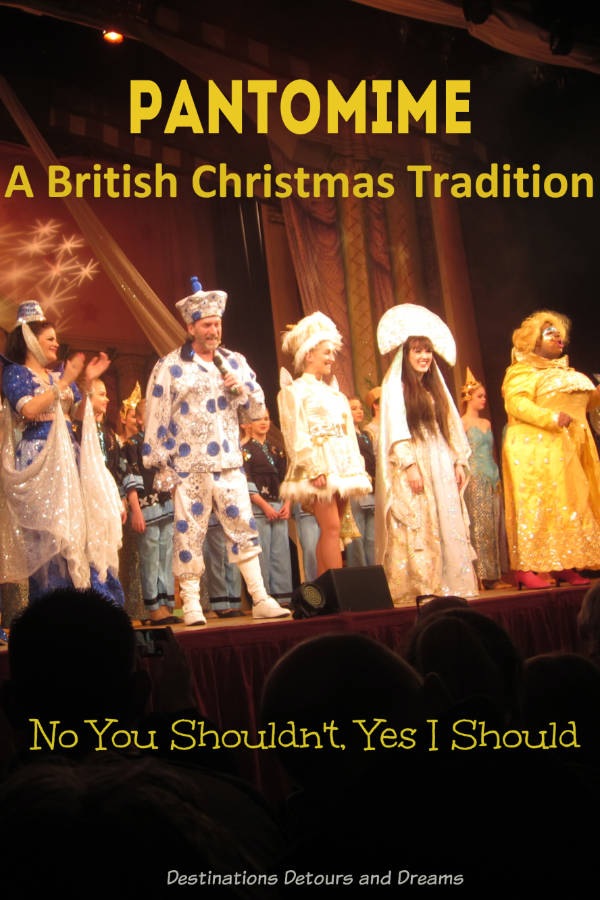