The Winnipeg Art Gallery (WAG) in Winnipeg, Manitoba, Canada holds over 14,000 Inuit artworks in trust. It is the largest public collection of contemporary Inuit art in the world. Qaumajuq, the WAG’s new Inuit art centre opening in late March 2021, provides a unique 40,000 square-foot space in which to display the works and share their stories. This past week, I had the privilege to attend a virtual media preview of the gallery. I am excited to share with you what’s coming.

Qaumajug means “it is bright, it is lit” in Inuktituk. It is pronounced “kow-ma-yourk” or sometimes “how-ma-yourk.”  The name seems very apt to me after seeing the building exterior in person and getting a virtual preview of its interior. The name was chosen by a group of Indigenous language-keepers and elders, who also named all interior spaces including Inuit and Inuvialuit names from each dialect of Inuktitut and names from all languages of Indigenous peoples of Manitoba.

The scalloped and fluid shape of the white granite of Qaumajuq contrasts with the triangular geometry of the limestone WAG building to which Qaumajuq connects on each of its four levels and yet the two buildings create a unified whole. A trip to the Canadian Arctic provided inspiration for architect Michael Maltzan. The design reflects the scale and curved forms of the North. During the preview session, Maltzan also talked about being fascinated by the quality of light in the North and in Winnipeg.

A wall of glass panes on the ground level opens up views into and out of the museum. It makes the museum visible before entering, connects it with the neighbourhood, and gives the white granite above it an impression of floating. It gives passerbys a glimpse into the impressive collection inside the Visible Vault.

The Visible Vault is a particularly cool feature of this new space. The three-story vault, encased in glass walls, contains thousands of artworks on glass shelves. Visitors can see the works and observe conservators, curators, and other staff work with the collection. The vault’s curved form allows visitors to walk around the collections and also be immersed in it. It was described in the preview session as being “enveloped and surrounded by the vault.”  A dumbwaiter and stairwell connect the vault with further storage spaces located in the building’s lower level. Glass floors at the north end of the vault allow the public to peer into the storage spaces below.

The scale of the north is reflected in the 8,000 square-foot main gallery located on the third level. It is named Qilak, which means sky in Inuktitut. Skylights in the ceiling suffuse the gallery with light. The monumental walls are intended to evoke the immense geographic features that are the background of many Inuit towns and inlets. Although there are larger pieces as well, many Inuit art pieces are relatively small in size. In the preview session, Matzlan said that the traditional response to displaying smaller works of art is to place them in smaller spaces, but by insinuating the scale of the north this gallery shows the art in a context more like that in which it was created. A smaller, more intimate gallery on the fourth-floor mezzanine level overlooks Qilak. The Mezzanine Gallery is named Giizhig/Kisik, which means sky, heaven, day in Cree/Michif/Ojibway.

INUA is Qaumajuq’s inaugural exhibition. INUA has two meanings. It means spirit or life force. It is also an acronym for Inuit Nunangat Ungammuaktut Atautikkut (“Inuit Moving Forward Together”) which articulates the collective vision for Qaumajuq as a site for Inuit to gather, share, be inspired by previous generations, and create new pathways forward in Inuit art. INUA features work in a range of media by about 90 artists from across northern Canada and some living in the the urban South as well as a selection of works from other circumpolar areas such as Alaska and Greenland. An audio guide is being prepared which will be voiced by Inuit youth. The exhibit focuses on the long continuity of Inuit art practice.

INUA is curated by an all-Inuit team representing the four regions of Inuit Nunangat, the Inuit territories of Canada: Dr Heater Igloliorte (Happy Valley-Goose Bay), Krista Ulujuk Zawadski(Igluligaarjuk/Chesterfield Inlet), Kablusiak (Somba K’e/Yellowknife), Asinnajaq (Inukjuak). The preview session featured a short film in which each curator highlighted a piece of art to which they had a familial connection to the artist. The pieces featured included a beaded caribou bag, two Inuit dolls, and an ivory carving. As I watched and listened to the curators talk about the pieces and their connections with them, I was reminded of something I read on the WAG’s Qaumajuq web page about sharing stories with the world being at the core of Qaumajuq. It states that Inuit artists have always spoken through art and there are many stories to tell. That sense of art giving voice to those stories has been strong when I’ve viewed special exhibitions of Inuit art at the WAG in the past.

The WAG says it is essential they acknowledge the colonial history of their permanent collection, recognize that art galleries have historically been part of the colonial structure of perpetuating racism and oppression, and commit to dismantling these systems. The WAG’s Indigenous Advisory Circle provides leadership and counsel and played a key role in the creation of Qaumajuq. The Circle is made up of representatives from the four regions of Inuit Nunangat. Urban Inuit and circumpolar Inuit communities, such as Alaska and Greenland, as well as First Nations and Métis from Manitoba and across the country are represented. Beginning with the opening of Qaumajuq, admission to WAG-Qaujamuq is free to all Indigenous peoples.

Qaumajuq is a place to provide connection to the land, people, and cultures of Inuit Nunangat. Northern Canada and Arctic regions are the traditional land of Inuit. Qaumajuq is located in the south on Treaty 1 territory and brings the North to the South. Although the North covers one-third of Canada’s landmass, fewer than two per cent of Canadians will ever set foot in the North. Qaumajuq provides a space to share Inuit stories more broadly. Travelling shows will bring exhibitions to northern Inuit communities. As Matzlan said in the preview session, “the best of art links cultures.”

Other spaces in the Qaumajuq include a focus gallery, a main level café, a classroom and learning spaces, penthouse studios, and a research lab.

A live-streamed two-part virtual opening will take place March 25 and March 26 at 6:30 pm Central time. Part I features a tour of the building and performers from Inuit Nunangat and Manitoba. Part II will tell the story of the spirits that exist within the art, bless Qaumajuq in ceremony by the Seven Nations of Manitoba, and feature a mix of celebratory messages.

On Saturday March 27, 2021, Qaumajuq opens to the public. Your WAG-Qaumajuq entrance fee gets you into Qaumajug as well as the WAG’s other galleries. Entrance for the first week of Qaumajuq’s opening (March 27 to April 2) is free thanks to Canada Life, but advance registration is required.

I look forward to visiting Qaumajuq in person, having the art speak its stories to me, and sharing more of those stories with you. Visit the Winnipeg Art Gallery website for more information. 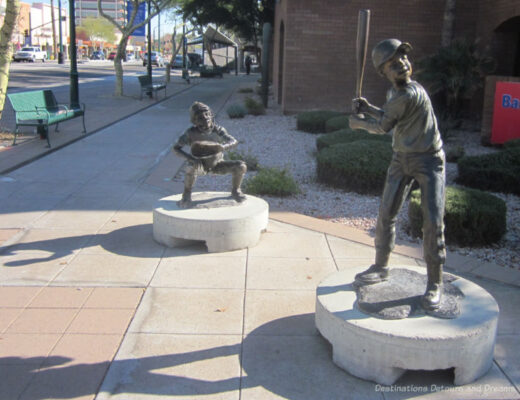