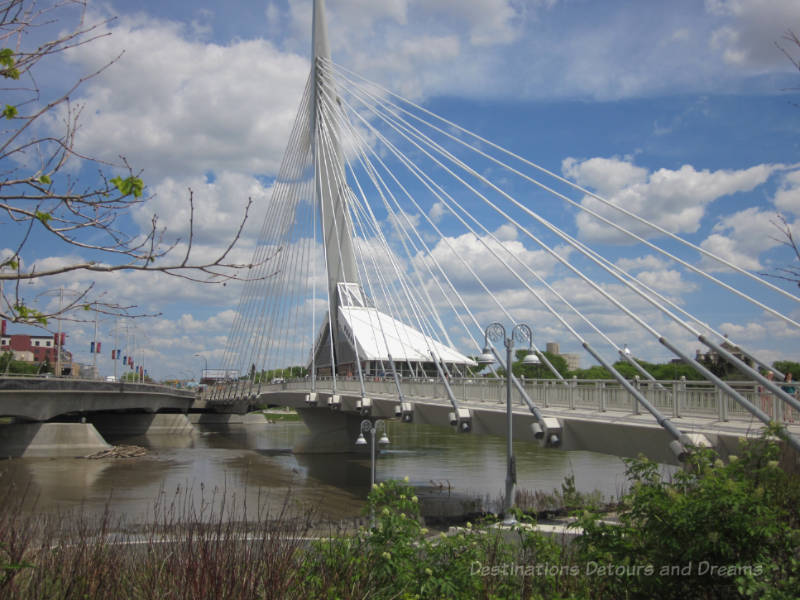 Winnipeg is sometimes referred to as “Winterpeg”because of its cold winters, but even during the winter most of the days are sunny and bright, although the hours of daylight per day are shorter than in the summer. In the winter, the sun often shines brightest on the coldest and bitterest days. In summer, heat accompanies the sunshine and days last well into the evening, 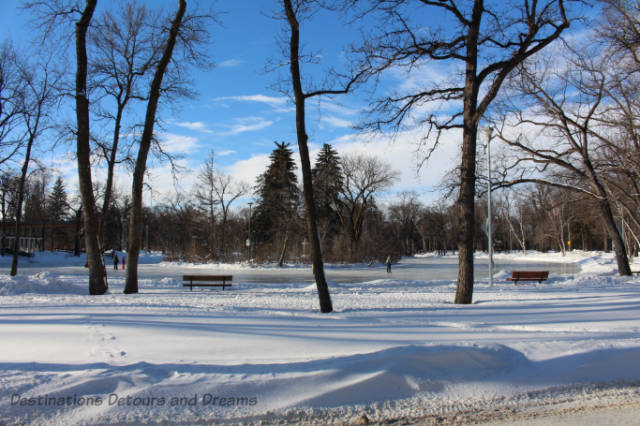 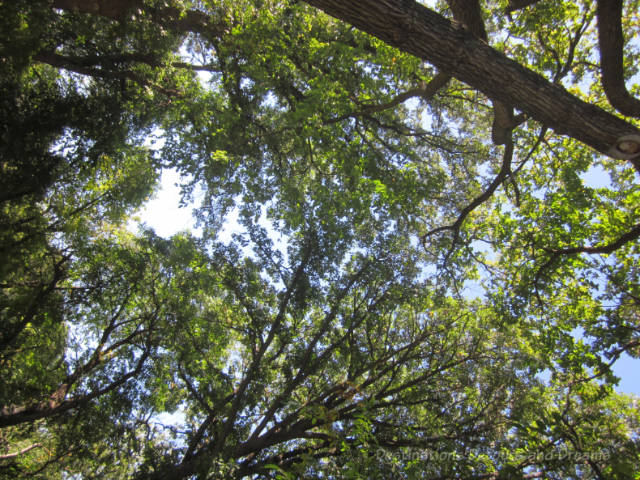 Sun shining through the treetops on a Winnipeg summer day

2. The unofficial first day of spring is the day the Bridge Drive-In opens for the season

The BDI, as it is known to locals, is a family-owned ice-cream establishment on Jubilee Avenue. It has been in business since 1957, offering many flavours of soft-serve ice-cream, sundaes, and other ice-cream creations. Recipes are much the same as they were sixty years ago, although now there are vegan-friendly options as well. Its signature dish is the Goog, an upside-down blueberry shake with a hot fudge sundae and bananas topped with whipped cream. 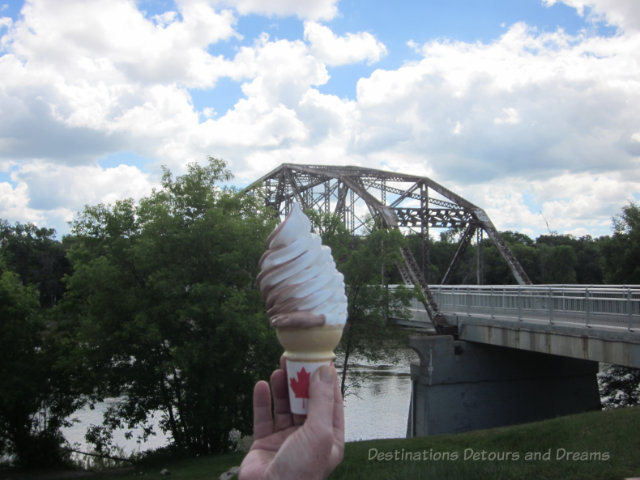 Part of the Bridge Drive-In tradition includes a walk across the Elm Park Bridge. The 16-foot wide bridge was built in 1912 to connect the St. Vital area to the rest of the city. It carried two-way vehicular traffic until 1974. It is now open for pedestrian and cycling traffic only. 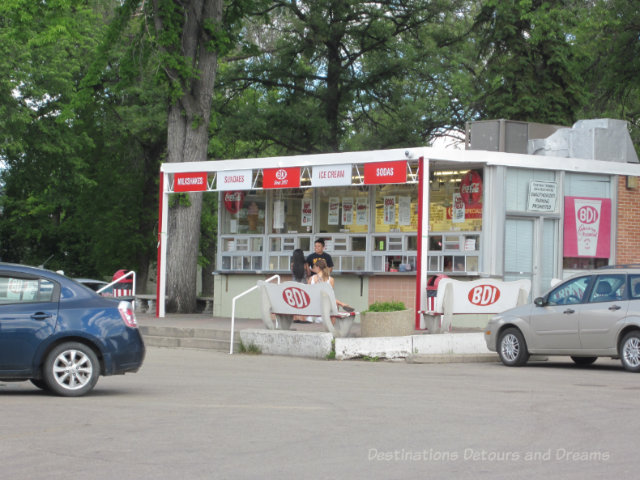 This photo was taken at 1:00 on a Tuesday afternoon in June. Almost any other time, expect significant line-ups.

Union Station was designed by Warren and Whetmore in the Beaux Arts style and built between 1908 and 1911. The station provided terminal facilities for the Canadian Northern Railway, the National Transcontinental Railway and the Grand Trunk Pacific Railway. The building was designated a National Historic Site of Canada in 1976. Today it houses the Via Rail terminal, a number of non-railway businesses, and the Winnipeg Railway Museum. 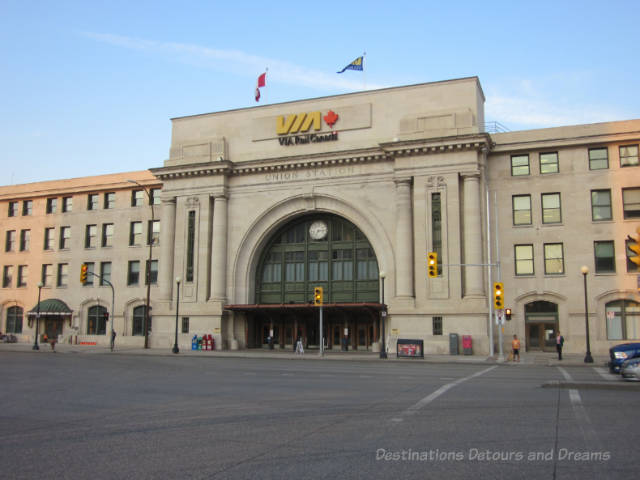 4. Winnipeg is on Treaty 1 Territory

Treaty 1 is a controversial agreement established in 1871 between Queen Victoria and First Nation band governments of southern Manitoba. It is the first of 11 numbered treaties signed between 1871 and 1921 as the Canadian government began to pursue settlement in the west and the north. First Nations wanted peace and to retain as much of their land as possible. When the government threatened to cut off negotiations, First Nation bands ceded more lands than they wanted to in exchange for farm animals and farm equipment. There were issues with administration of the treaty almost as soon as it was signed. The animals and equipment were “outside promises” not written into the main body of the treaty and became unfulfilled promises. The negotiation process was filled with misunderstanding. Other oral discussions did not make it into writing. Oral discussions used different wording than was written in English in the treaty. Issues with interpretation of all the numbered treaties continues to this day. The Supreme Court of Canada handed down a judgement in 1996, stating it is necessary to interpret the treaties “in the sense that they would naturally have been understood by the Indians at the time of signing.”

In recent years, it has become common for public events, performances, and even school days to begin with the acknowledgement that we are on Treaty 1 land. It is a protocol to show respect. Recognizing the treaty rights we still have today may be a first step in moving forward in collaboration and reconciliation with indigenous communities. Note similar acknowledgements happen across Canada on other treaty lands. 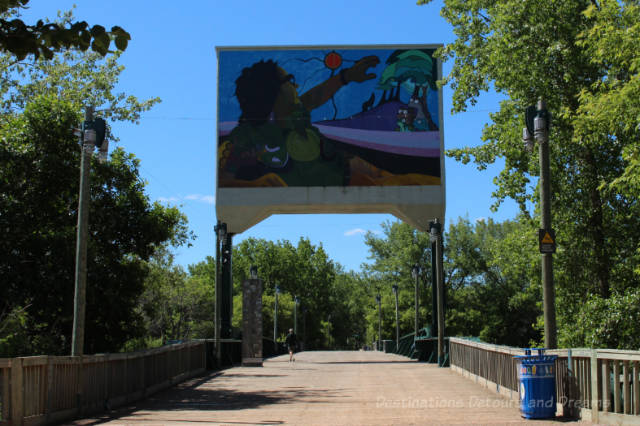 The Forks historic rail bridge at the junction of the Red and Assiniboine Rivers, a meeting place for thousands of years

Salisbury House is a local chain of diners referred to simply as “Sals”. The first Sals opened in Winnipeg in 1931. Founder Ralph Erwin named the new eatery after the Salisbury Steak and called his burger a “Nip”, referring to taking a nip or bite of Salisbury Steak. Today there are nine Salisbury House Restaurants and four Xpress locations within Winnipeg. Erwin sold his majority interest in the chain in 1979. The chain has had a couple of ownership changes since then. In addition to Nips and fries, the restaurant serves hearty breakfasts, sandwich platters, and a variety of dinner plates, including Salisbury Steak. A stop at Sals is a must-do for many former Winnipeggers on return visits to the city.

Rainbow Stage, located in Kildonan Park, is Canada’s largest and longest running outdoor theatre. The open-air theatre seats up to 2,300 people, but is sometimes transformed into a smaller space for more intimate settings. The theatre came into being after the old bandstand in the park was damaged by the 1950 flood. Construction of a new structure suitable for open-air theatre began in 1951. The first performance was a concert in September 1953. Rainbow Stage airs two to three musicals each summer.

7. Honey dill sauce was an accident created in Winnipeg

I’ve read that honey dill dipping sauce is a Manitoba thing and not readily found elsewhere. I don’t know how true that is. I haven’t hunted for it in other places. I do know it is a popular chicken finger dipping sauce in Winnipeg. The sauce is made with mayonnaise, honey and dill. The late Peter Eng of Mitzi’s Chicken Finger Restaurant came up with the recipe when he attempted to duplicate a different sauce he’d tasted at another restaurant. He was unsuccessful in the duplication, but came up with a new favourite. Mitzi’s is still in operation and is still a favourite for chicken fingers and honey dill sauce. Other restaurants offer their own versions of the sauce.

The cake boxes you see people carrying through Winnipeg airport likely hold Jeanne’s cakes. And the people holding them are likely former Winnipegers taking an old favourite with them to their current home. Jeanne’s Bakery began serving cakes and sweets in Winnipeg in the 1930s. Their traditional cakes, which come in rectangular shapes of varying length, have a shortbread cookie crust and come in flavours of white, chocolate, marble or banana. They have white icing and dark chocolate shavings on the side. Winnipeggers either love or hate Jeanne’s cakes. For many, a special occasion is just not special without a Jeanne cake. 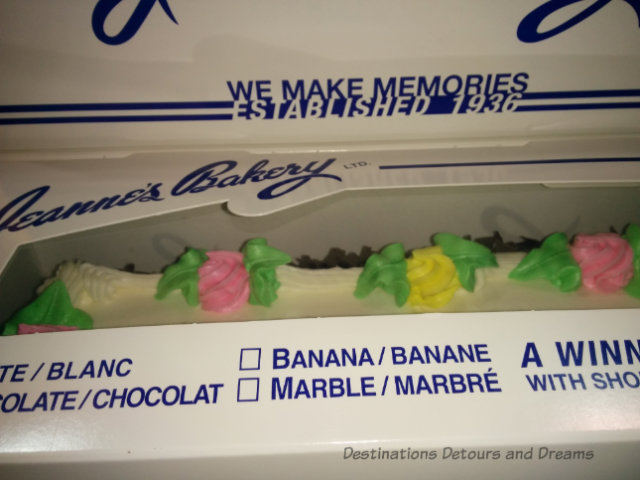 9. The Winnipeg Art Gallery has the largest collection of Inuit art in the world

The Winnipeg Art Gallery (WAG) has been collecting Inuit art since the 1950s. In 1999, when the map of Canada was redrawn and the northern territory of Nunavut was formed by dividing the Northwest Territories into two entities, collections of art in the territories was assessed. Ownership of pieces from the eastern Arctic was transferred to Nunavut, where Inuit people make up 80% of the population. In 2016, Nunavut and the Winnipeg Art Gallery reached an agreement in which 7,500 pieces were loaned to the WAG. A few are on display in the WAG’S permanent galleries and others are displayed via changing temporary exhibitions, but much of the collection remains in storage. Work has begun on a new Inuit Art Centre building next door to the WAG facility to be able to better showcase this art collection. 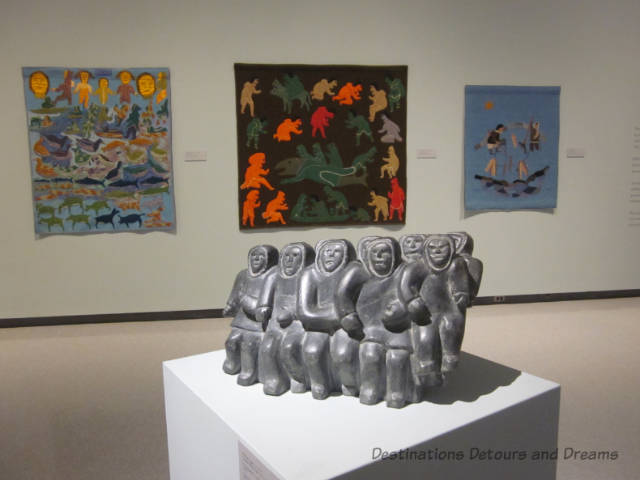 10.The West End is in the heart of the city

In 1972, the city of Winnipeg merged with 12 other cities and municipalities surrounding it to create a unified city (or unicity). Since 1960, these communities and the City of Winnipeg had been part of the Metropolitan Corporation of Greater Winnipeg, a separate layer of government which provided transit and municipal services. The West End may have been the western end of original Winnipeg boundaries, but is now just next door to downtown and miles away from the western boundary of the city. Similarly, the North End is miles from the northern end of Winnipeg. 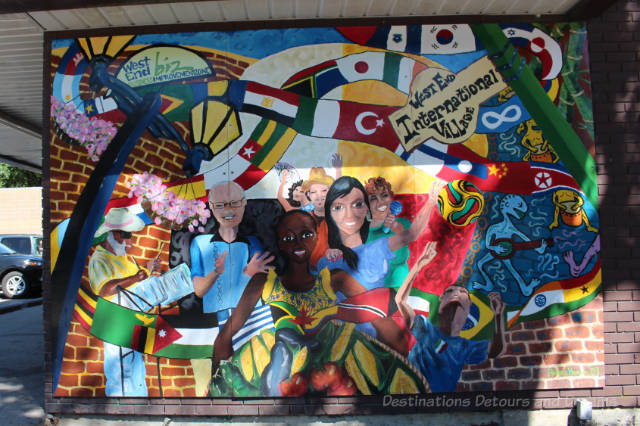 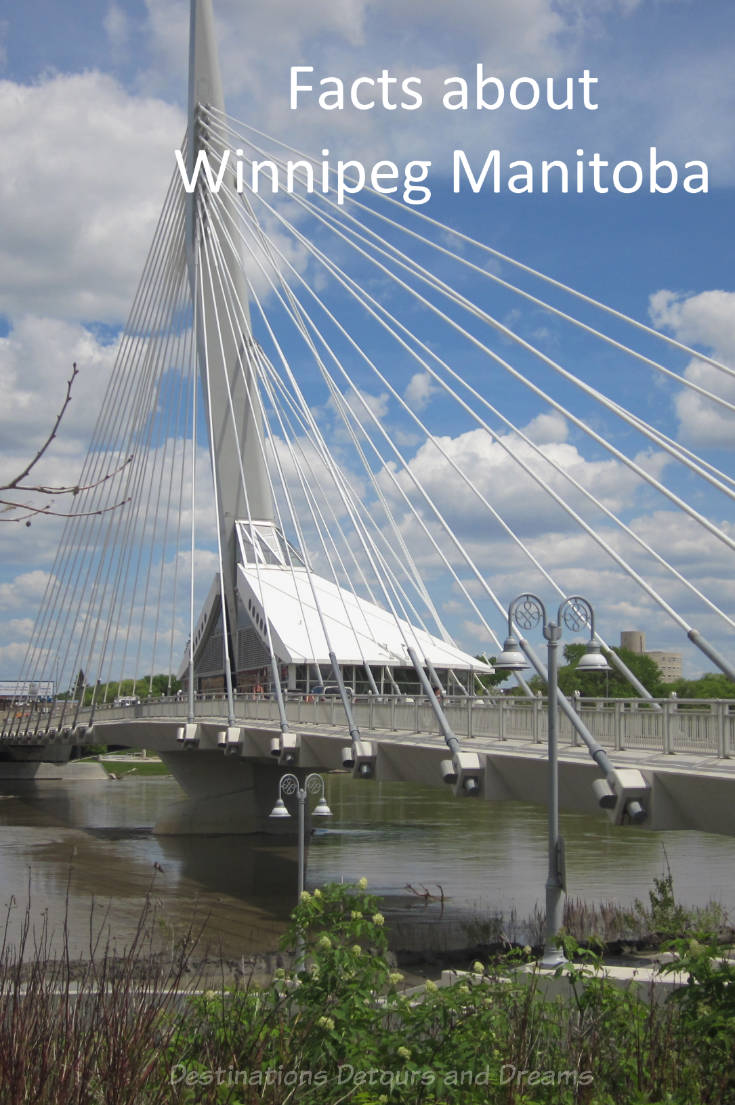