An index, guide, and overview of self-guided walking and driving tours in Winnipeg, Manitoba, Canada

I’ve assembled a list of self-guided walking tours, as well as a couple of driving tours, available for my home city of Winnipeg, Manitoba, Canada.

The Tripvia app has several Winnipeg tours. The app, which works on iOS and Android devices, is free to download. Once downloaded, individual tours can be purchased for prices between five and nine dollars. Monthly subscription options get you unlimited access to all their tours, in Winnipeg and other locations.

Use your smart phone to guide you along the tour route. Recordings of tour information play when GPS detects you’ve reached the next point of interest. The option also exists to read the information in text form.

Currently available walking tours include a tour of the statues at the Legislative Building, a tour through Winnipeg’s theatrical history, a tour of Winnipeg’s wealthy beginnings, a haunted Winnipeg tour, and tours of Corydon and Osborne Village, The Forks, and Assinboine Park. A driving tour features highlights of south Winnipeg.

I’ve taken several of the Winnipeg tours. I found the app easy to use and the tours interesting.

The 20-block Exchange District in central Winnipeg was the original centre of commerce and culture in the city. The National Historic Site boasts North America’s largest and best-preserved collection of heritage buildings. Today the narrow angled and cobblestoned streets house theatres, museums, galleries, boutique shops, restaurants, and cafés. Many Winnipeg festivals are centered in The Exchange.

During the summer months, the Exchange District Biz offers guided walking tours and food tours. The Exchange Biz recently created four short self-guided audio tours ranging from .25 and .7 kilometres in length. A map on the Exchange web site highlights the points of interest on each tour. Audio recordings for each tour provide navigation directions and information about the landmarks.. Stop and restart the audio as needed.

The four tours available are A City’s Beginnings, Early Winnipeg Lifestyles, Art and Architecture, and Winnipeg General Strike of 1919. Take the tours individually or combine them in one longer loop tour. Find the tours here.

St. Boniface, located across the Red River from downtown Winnipeg, is known as Winnipeg’s French Quarter. Its origins date to 1818 with the establishment of a Catholic mission. A community of Métis and French-Canadian residents settled around the parish.

Located at the junction of the Red and Assiniboine Rivers in downtown Winnipeg, The Forks is a top city attraction. This 6,000-year-old meeting place remains a focal point for locals and tourist alike.

The Forks free audio tour, available in English and in French, takes you past points of interest on the site. You’ll learn about the significance of the junction of the two rivers, the design and construction of the Oodena Celebration Circle, the redevelopment of the abandoned rail yard into The Forks, and ancient artifacts uncovered on the site. The tour is narrated by Nigaan Sinclair, Curator of Indigenous History at The Forks and Professor of Native Studies at the University of Manitoba. Get the tour here.

The Winnipeg Arts Council offers a free mobile app as a guide to artworks created within its Public Art Program. The app, available on iOS and Android platforms, features over 60 pieces of public art. A map shows their locations. Detailed information about each piece is available. Use the map on the app to create your own route to explore public art or simply use the app to find out more about art pieces you come across during other explorations. For more information on how the app works, read my post Exploring Winnipeg Public Art via an App. The app is available for download here.

The Winnipeg Architecture Foundation is a registered charity with a mandate to educate the public about architecture. They run events and special tours from time to time. They also offer two interactive tours you can take on your own.

The Archi10 is a free bilingual app, available for iOS and Android, that works as a self-guided tour. The app synchronizes with Winnipeg Transit Route #10. Route 10 passes by some of Winnipeg’s most significant buildings in the neighbourhoods of Wolseley, Downtown, and St. Boniface. When you near places of interest, narrators describe the building. The app features original music created specifically for these urban landscapes.

The Archi10 app is tailored for use on the bus, but could be used at other times. Use it to find information about a featured building or create you own driving tour mimicking the bus route. Download the tour here.

The QR Tour is based on decals containing QR (Quick Response) Codes that have been placed on a selection of significant architectural projects throughout Winnipeg. You scan the QR code with the camera on your smart phone. When the device has finished scanning, you are redirected to a webpage with information about the building. You can find more information about the QR Tour here. The page contains a map of featured buildings which you can use to create your own tour route.

I have not yet taken either of these tours, but I have taken a couple of one-time guided tours put on by the Winnipeg Architecture Foundation. Both were excellent.

There are murals located throughout the city with the West End containing the largest collection. The West End is a centrally located ethnically-diverse neighbourhood. The murals showcase the area’s history and diversity.

The West End Biz offers a guided mural walking tour in summer months, but you can also explore the murals on your own. There is a free self-guided audio tour covering some of the murals. A map on the West End Biz site shows the location of all the murals. Use it to map out your own route. The map contains the names of the murals, but very little other information. If you want to learn more about individual murals (e.g. artist, meaning of the murals, date of creation), go to the Murals of Winnipeg site.

I’ve taken the guided walking tour and explored some of the other West End murals on my own. Read more at Mural Tour in Winnipeg’s West End and More Winnipeg West End Murals.

Seven Oaks House, now restored as a museum, is the oldest home remaining in Winnipeg. It was built in 1851-1853 for John and Mary (Sinclair) Inkster, heads of an influential Métis family in the Red River Settlement. The museum’s self-guided The Roots of Our Community – The Seven Oaks Homestead walking tour takes you around the homestead and neighbouring community. The tour features thirteen points of interest. Inkster family history, agricultural history, Red River flood history, and information about the Battle of Seven Oaks, the bloodiest event in Manitoba’s history, are some of the information provided.

Ross House is a small community museum located in Winnipeg’s North Point Douglas neighbourhood. The museum offers a look a daily life in the 19th century presented through the eyes of the Ross family, an influential Métis family. The Mapping the Point – North Point Douglas self-guided walking tour explores the history of the area around Ross House. The 10 points along this tour include a Monument to Ukrainian poet Markian Shashkevich, an 1862 example of post-and-plank architecture, the Manitoba Indigenous Cultural Education Centre Inc., Vulcan Iron Works which was one of North America’s largest foundries, and a Queen Anne Revival home built in 1899 that became a meat and grocery store in 1911.

You can both free tours here.

An old gate, park landscaping, sculpture, sound, light, and modern technology at Upper Fort Garry Provincial Park combine to showcase the history of what was once an important fur trading post as well as the history of Winnipeg. You can wander through this park/outdoor museum on your own and read the signage on the site. I’ve written about exploring Manitoba history at Upper Fort Garry. Download the free GPS-enable app (for iOS and Android) to guide your exploration of the site and learn some of its hidden stories.

On the GPSmyCITY app you’ll find self-guided walking tours for cities around the world. The app is free to download to iOS or Android devices. You make in app purchases for the tours you are interested in. Follow the route on the offline map downloaded to your phone or use the app’s GPS navigation to guide you from one stop to the next. Detailed information is provided about the attractions at the stops. You can also access the tour without using the app by requesting a printed PDF download for a small fee.

As of June 2021, there were five Winnipeg sightseeing walk tours on the GPSmyCITY app: Winnipeg Introduction, Museums and Galleries, Winnipeg Historical Churches, Saint Boniface, and Architecture. All tours take approximately two hours and feature between seven and eleven attractions. I haven’t taken any of the Winnipeg tours myself nor I have taken a GPSmyCITY tour in another city so I have no comments on tour quality and no tips to offer.

Transcona, a suburb in the east end of Winnipeg, was its own city until Winnipeg amalgamated with several surrounding communities in 1972. Transcona developed as a railway town after the Grand Trunk Pacific Railway built railway repair shops in the area. The Transcona Museum contains information about the history, growth, and development of Transcona and the surrounding Springfield area.

Wolseley is a neighbourhood in Winnipeg’s West End. It developed between 1905 and 1930 as a middle and upper middle class residential area. Beginning in the 1950s, as families moved and settled in Winnipeg’s suburbs, a number of the homes were subdivided into rooming houses. A rejuvenation and gentrification began in the 1970s and 1980s as large houses, a central location, and low real estate prices enticed young adults to the area. The new residents were largely artistic and socially active. The area became known as “The Granola Belt.”

Today, once again a desirable residential area, Wolseley is one of the most intact pre-1930 residential areas in Canada. Examples of the varied architectural features chosen by the original builders adorn the houses.

The Manitoba Historical Society lists over 80 points of interest on its self-guided walking tour of Wolseley. The web page contains fascinating information about each point, but no map is provided. Use the listed addresses to map your own route. Find tour information here. 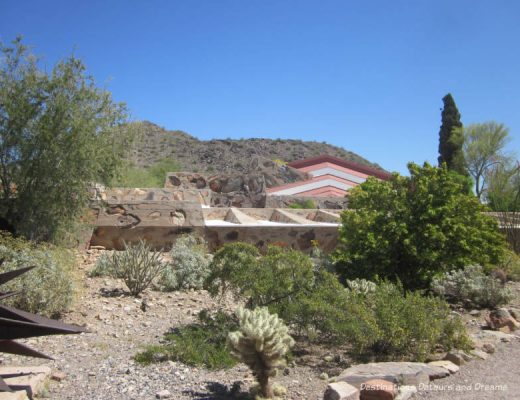 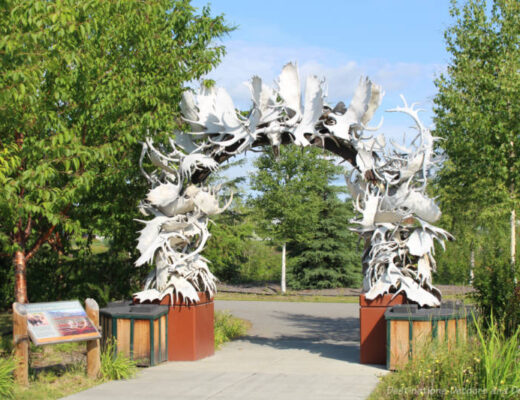 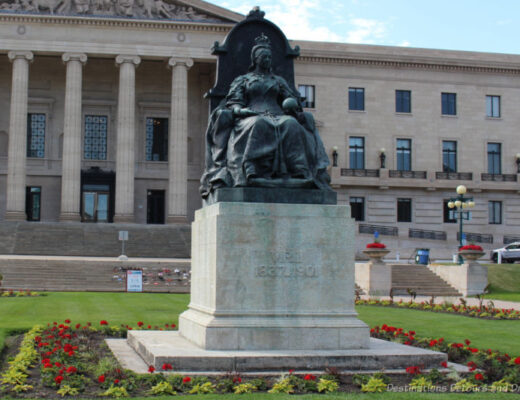